Iraqi forces announced yesterday the launch of a military operation to liberate and restore the rest of the areas west of the city of Mosul from the grip of the (Daash).

The commander of operations (coming to Nineveh) Lieutenant General Abdul Amir Yarallah in a statement that the joint forces stormed the Shifa and the Republican Hospital as part of the process of restoring the western side of the city.

The military official explained that these neighborhoods are located adjacent to each other inside the old town and in the northern part, which is the last areas under the control of (Dahesh) and fortified.

For his part, the commander of the Iraqi police forces, Major Raed Jawdat said in a statement that the federal police forces stormed the Zanjili area and crossed the third bridge from the north of Zanjili towards the old Mosul.

“Our forces are capable of resolving the battle of the Old City and restoring the Nuri Mosque,” he said. Da’ish loses control of vital areas near Hadba. “

The al-Nuri Mosque, where the organization’s leader Abu Bakr al-Baghdadi declared the “state of the caliphate” in symbolic terms and will be controlled by Iraqi forces, the collapse of the organization in Mosul. In a related context, a senior leader of the Iranian Revolutionary Guards was killed yesterday, as a result of clashes between the militias of the popular crowd and the organization of Dahesh in the district of Al-Baaj west of Mosul.

Security sources told Al-Arabiya.net that Revolutionary Guards general Shaaban Nasiri was killed during a military operation carried out by the Popular Liberation Army militia to liberate Al-Baj district, the far west of Mosul.

Nasiri is a leading figure in the Revolutionary Guards who helped establish the Badr militia of Iraq, which belongs to the militia that fought with Iran against the regime of Saddam Hussein in the 1980s.

The militias called the Popular Rally Nusseiri, saying “his influential role in Iraq, Syria and Lebanon.”

Meanwhile, Iraqi security forces evacuated more than 1,000 civilians from the last bastions of the Daqsh organization on the western side of Mosul, hours after they broke into heavy fighting against the group’s militants.

The organization of Daadash has deployed suicide bombers and sniper at the entrances to Mosul, again threatening civilians trapped in the death if they tried to escape or refused to cooperate.

“More than 1,000 civilians have been evacuated from the old city and the Zanjili district on the western side of Mosul amid heavy fighting at the entrances of the two areas,” said Lt. Col. Karim Diab, a federal police officer.

“The police forces, the rapid response and the fight against terrorism opened safe spaces to evacuate the civilians, and the fugitives were immediately transferred to areas outside the battlefield,” Diab said.

This came as the United Nations alerted to the displacement of about 200 thousand Iraqis in the coming period of areas still under the control of Dahesh in Mosul.

UN Under-Secretary-General for Humanitarian Aid Stephen O’Brien expressed “grave concern for the safety of civilians still in areas controlled by armed militants,” referring to reports of house-sniper attacks and the targeting of children by snipers. 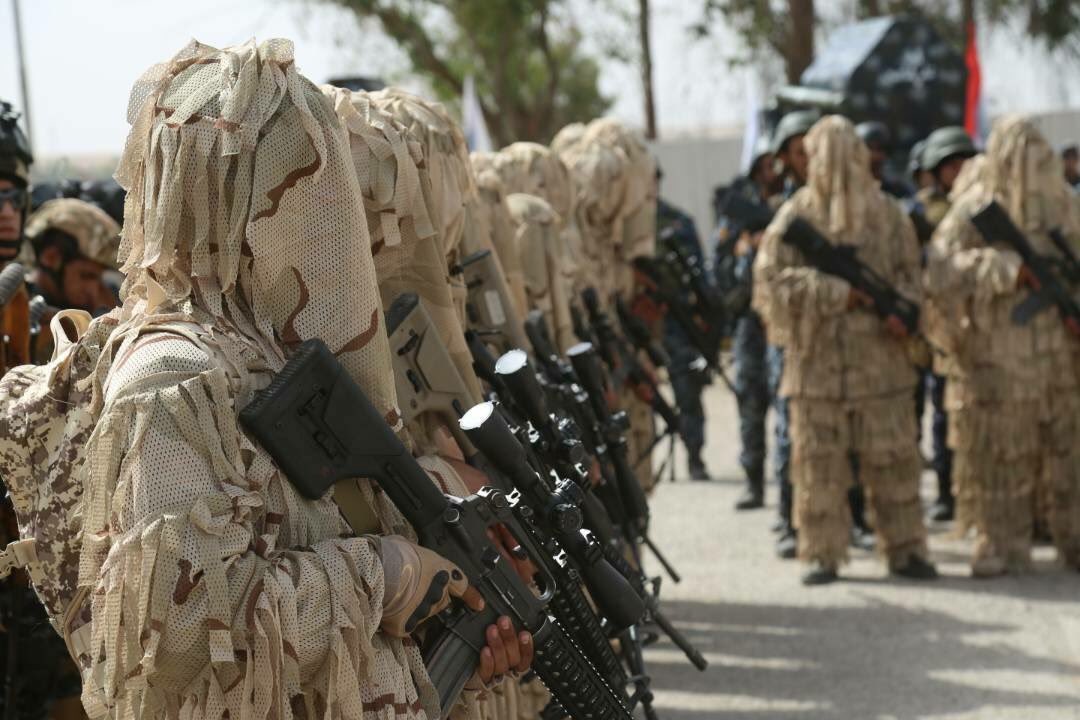 Brutal fighting as #Iraq‘s forces stormed the Zanjili district in central #Mosul. One of the 2 major districts left under Da’ish control

) districts in central #Mosul. Once ops here are done, only the old city will be left 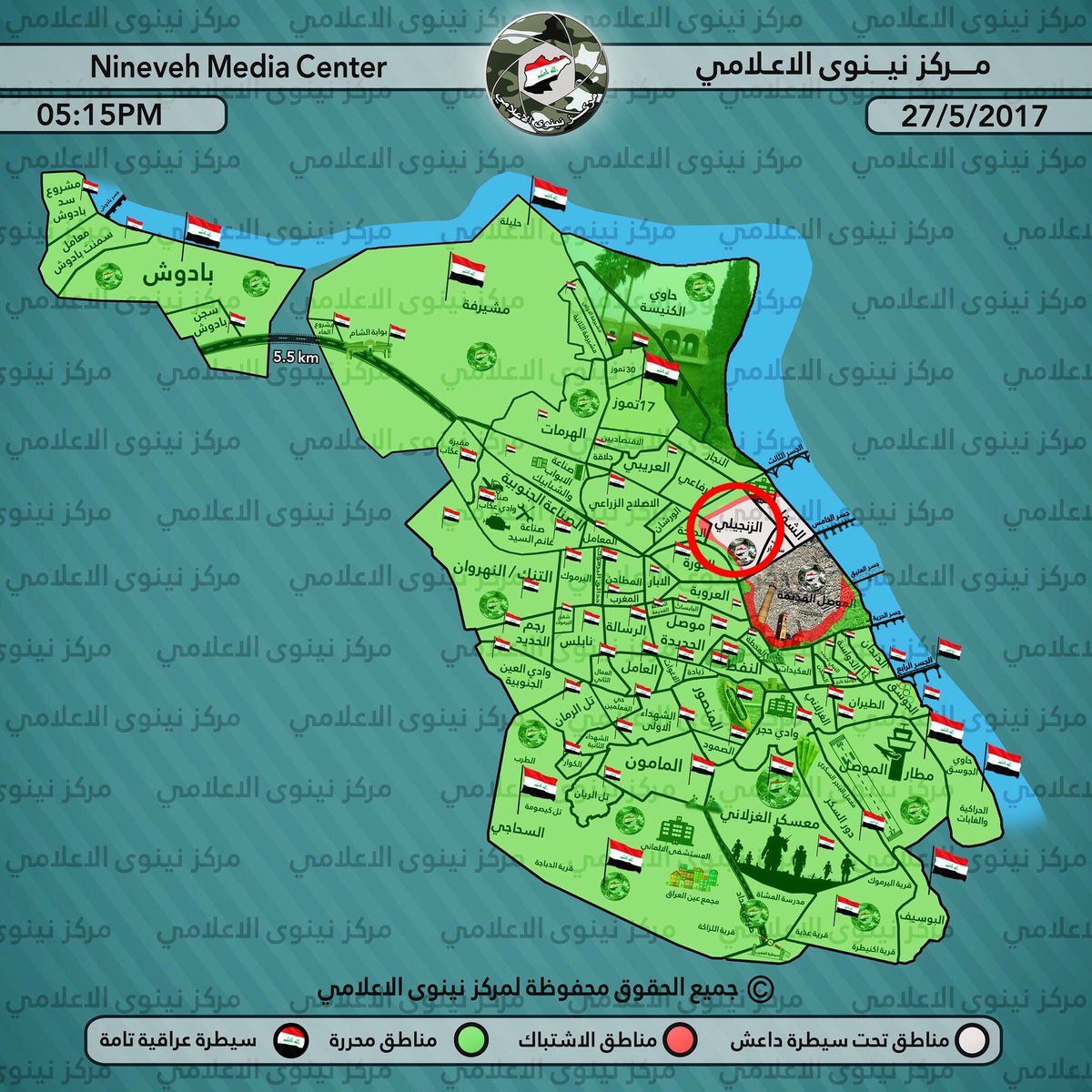 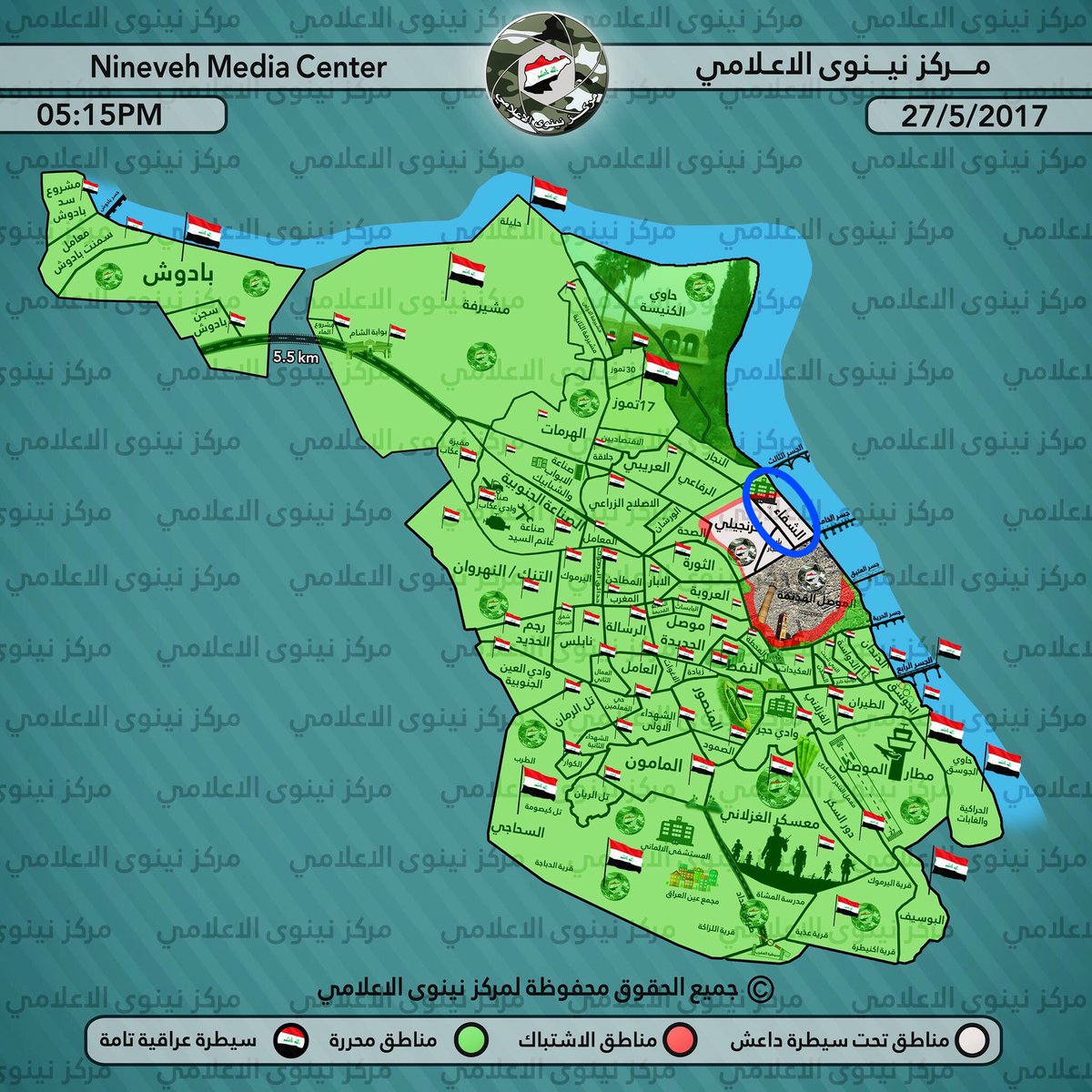 Araji said that “we accept the month of God this year , and our country is preparing for the victory of the brutal terrorist brilliant forces demolished by our heroes in the police, the army and the popular crowd and tribal and security of all our collections who are now behind the barricades to defeat terrorism and defeat it .”

A call with one of the #Iraqi Counter Terrorism fighter in west #Mosul ended quickly.
“This is zero hour, this is the end, gotta go bro” ✌🏽 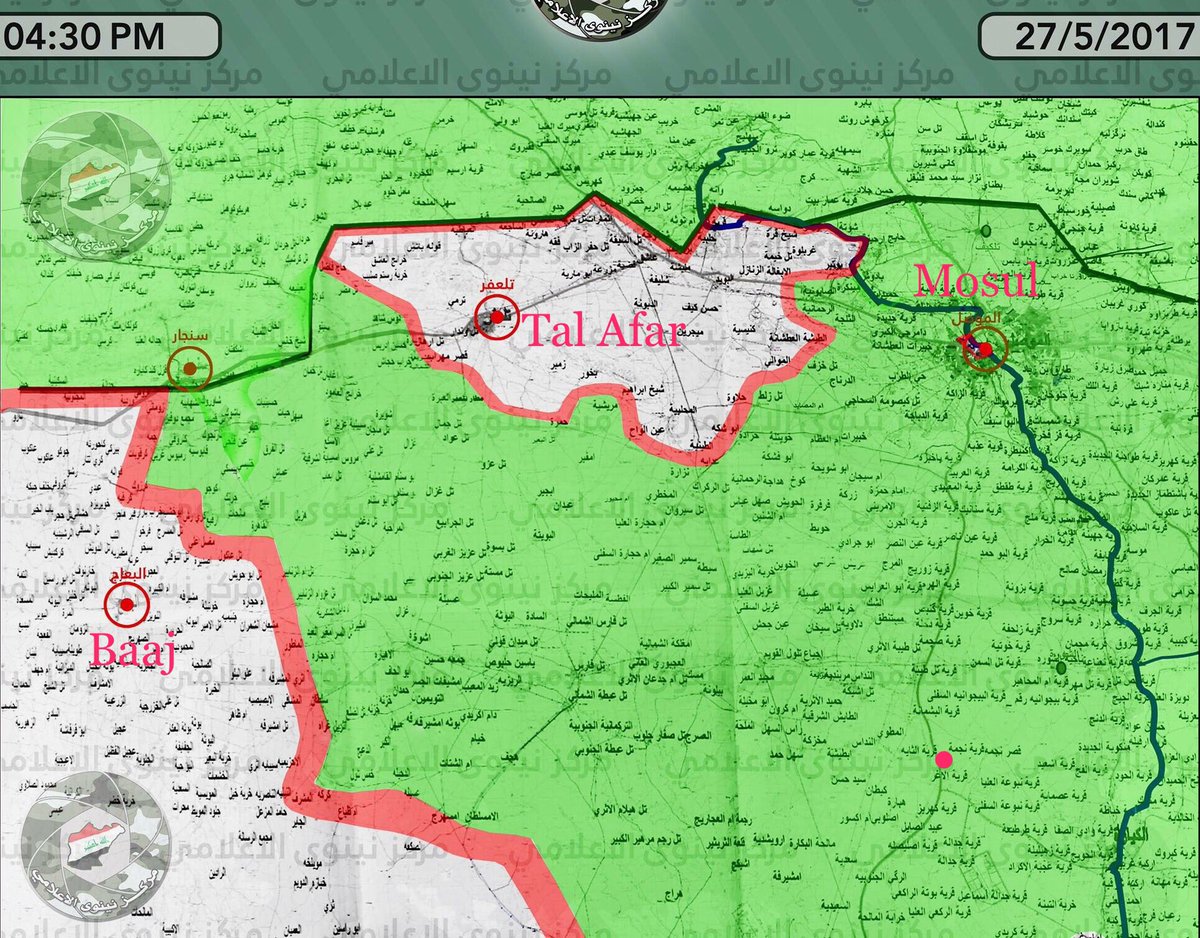 Baghdad
On Saturday, the Al-Harbi Information Cell published a map of the rest of the liberation of the right-hand coast of Mosul.

The map below shows that “the remaining areas under the control of Dahesh are a very small part.”

The joint security forces continue the process of liberating the city of Mosul from the grip of “Daash”, after the announcement of the Commander-in-Chief of the Armed Forces Prime Minister Haider Abadi starting zero hour (October 17, 2016), to liberate Nineveh. 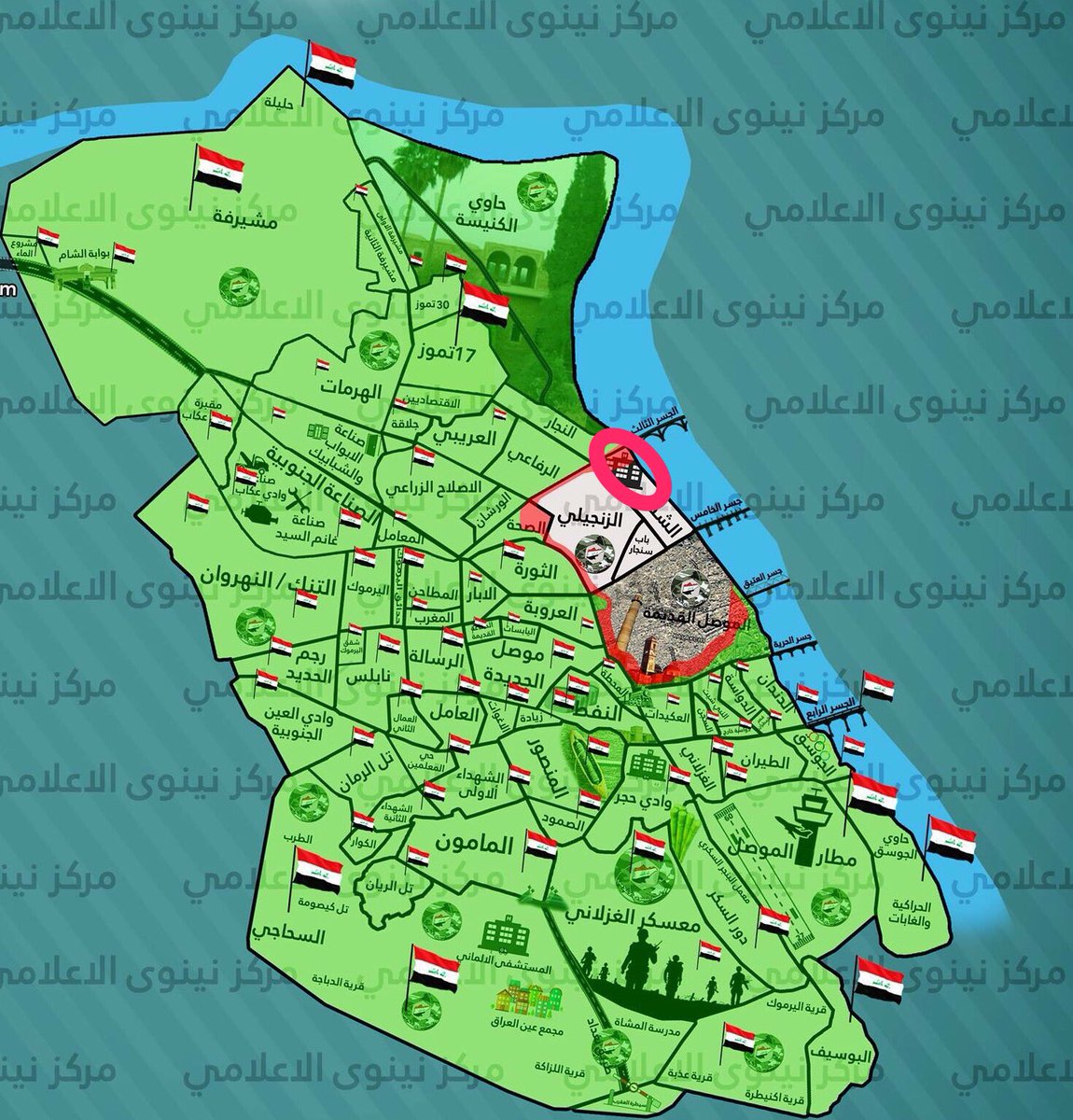 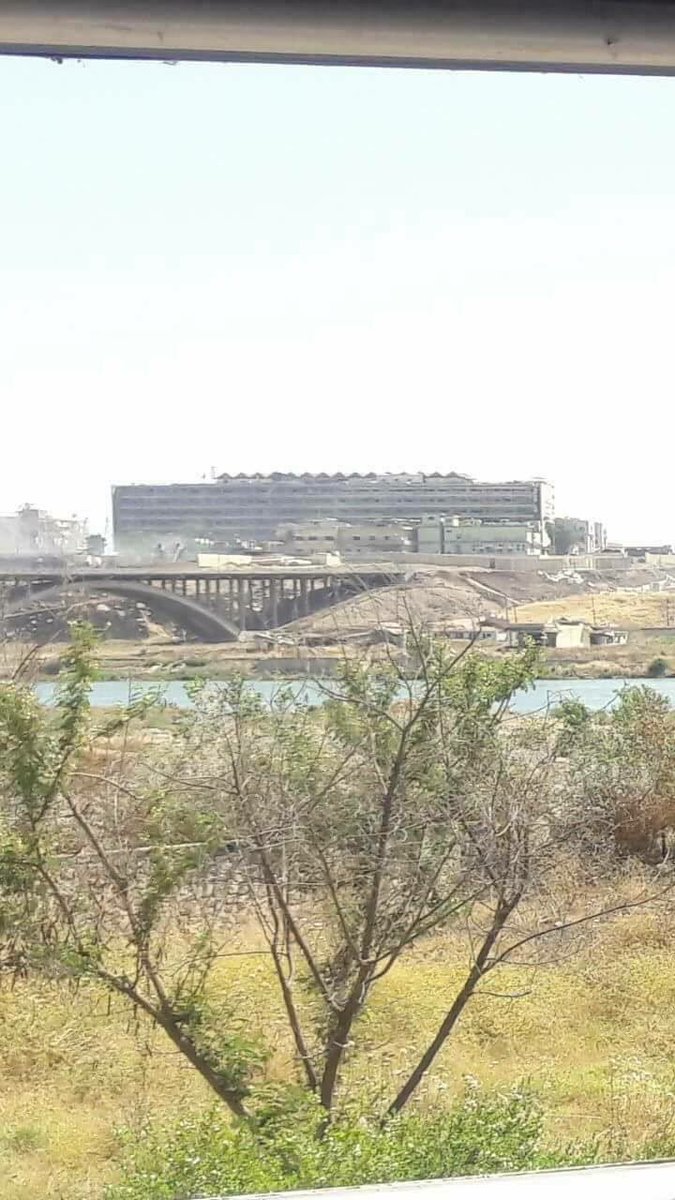 Said anti-terrorism commander Lieutenant-General Abdul-Ghani al-Asadi, Saturday that the Iraqi security forces stormed the rest of the neighborhoods still under the control of the organization Daesh in the right side of the city of Mosul.

Asadi said in a televised statement that “Iraqi forces stormed at six o’clock in the morning of those neighborhoods, adding that there is a collapse of the ranks of the terrorist organization.”

He said al-Asadi said, “Daesh now has no option of either murder or surrender.”

The commander of the military campaign to restore the city of Mosul had announced earlier in the day for storming the joint Iraqi forces remaining neighborhoods still under the control of the organization Daesh in the right side of the city in order to liberate it from his grasp.

The commander of operations “are coming Aaninoy” Lieutenant-General Abdul Amir Rashid Allah Yar in a statement that “the hordes of joint forces began to liberate the remaining neighborhoods is liberated in the right coast.

Twilight News / revealed Nineveh province police chief Brigadier General confident al-Hamdani said on Saturday that the police leadership decided to ban women wearing the veil in the streets and public places and markets in the city of Mosul.

Said Brigadier General Hamdani in a statement and a brief to the Twilight News, the Nineveh police and against the backdrop of the infiltration of elements of al-Daesh dressed women banned wearing the veil in the streets of Mosul.

This comes at a time by approaching Iraqi forces liberate the city completely from the grip Daesh which ravaged in June 2014, and the imposition of hard-line religious Ahakmh on their population.