The legal expert, Tariq Harb, the constitutionality of early elections and invite the President of the Republic.

The President of the Republic Barham Saleh, on Thursday, agreed to organize early elections and replace the members of the current election commission with judges and experts.

“Under Article 64 of the Constitution, the Prime Minister asks the President of the Republic to dissolve parliament as it is within his powers. When the parliament is dissolved, the government becomes caretaker and the president remains suspended until elections are held within 60 days,” he said. Ahead of time. ”

“If we want to amend the constitution, we must form a committee of 27 deputies from all components to collect the materials and the parliament votes on what it finds appropriate,” Harb said.

He added, “Previously, the judiciary received only a notification, but as long as it took legal action against each accused of financial and administrative corruption without the need for the approval of judges by the House of Representatives, and the judiciary authorized the Parliament to investigate deputies who are proven corrupt.”

“The judiciary is dealing with evidence and complaints and we see every day large figures referred to the courts and may be released or stopped away from the media for confidentiality of files,” Harb concluded.

Renewed popular protests on the 25th of this month in the capital Baghdad and 10 other provinces to demand reforms and services and improve the living situation and eliminate corruption in all state institutions.

The demonstrations saw a large number of demonstrators and security forces as a result of tear gas.

The source said in a statement received by the agency (Euphrates News) a copy, that “the religious authority, stressing that participation in peaceful demonstrations is a right for all Iraqis, it stresses the need not to use its name or raise its image by any groups participating in the demonstrations of supporters of political forces or others “.

He stressed, “for its support and support for the reformist demands of peaceful demonstrators and not to differentiate between their children demanding reform on different orientations.”

The number of readings 119

BAGHDAD / Obelisk: MPs from the conquest of Fatah, likely to resolve the political position of the current government “within 48 hours,” while noting that the Kurdish political blocs will not be “influential” in the fate of Prime Minister Adel Abdul Mahdi from staying in office or dismissed.

The MP for the coalition, Fadel Jaber in a press statement followed by “obelisk”, “The position of the Kurdish political blocs in support of the survival of Prime Minister Adel Abdul-Mahdi is ineffective in the event was agreed between others and Fatah to dismiss him and replace him with another person,” pointing out that “the survival of Abdul The Mahdi or his dismissal is confined to allied conquest and others. ”

He added, “The political blocs will resolve its position on the current government by staying or dismissed within 48 hours,” noting that “the Kurds are trying to maintain their political gains by supporting Abdul Mahdi to stay in the government.”

A member of the Patriotic Union of Kurdistan, Karwan Anwar, said on Thursday that Prime Minister Adel Abdul Mahdi, “does not take responsibility alone in this serious circumstance . ”

On Thursday, President of the Kurdistan region of Iraq, Nechirvan Barzani, also announced his rejection of any amendments to the Constitution that harm democracy, while affirming his support for the steps of the government of Prime Minister Adel Abdul Mahdi reform. 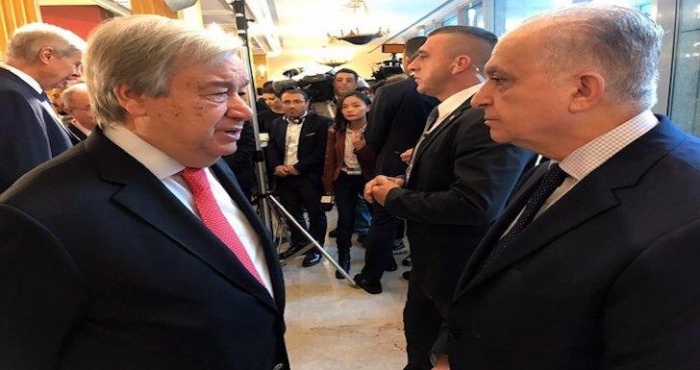 Foreign Minister Mohammed Ali al-Hakim met with the UN Secretary General and discussed the role of the United Nations in supporting Iraq in the reconstruction phase.

In a statement received by Al-Ghad Press, Minister al-Hakim referred to “the latest developments in Iraq and the governmental measures taken in relation to the demonstrations, including the launching of reform packages that contribute to meeting the demands of the demonstrators.”

He called on the United Nations to “provide more support to stabilize and achieve the development that the government is working to achieve, and support security and stability,” noting that “Iraq supports the security and stability of the region, and is keen on the need to adopt political solutions to crises.”

The Council of Representatives in its eleventh session, which resumed under the chairmanship of the President of the Council Mohammed Halbousi on Thursday the need to attend Prime Minister Adel Abdul Mahdi to the next session of the Council to see the repercussions of peaceful demonstrations and violence that accompanied, and finished reading a report and discuss the draft First Amendment Law of the Unified Retirement Law

At the beginning of the session, the president and members of the Federal Public Service Council were sworn in.

On the repercussions of peaceful demonstrations, the Presidency and members of the Council stressed the need for the Prime Minister to attend the Dome of the Council to listen to the details that accompanied the demonstrations in the past days and to uncover the circumstances of the targeting of peaceful demonstrators and the excessive use of force against them, based on the demands of a number of women and gentlemen of deputies to host the Prime Minister .

He directed the President of the Council to determine the next meeting to host the Prime Minister, indicating that in the absence of his presence will proceed with the procedures of questioning.

On the other hand, the Council finished discussing and reading the report of the draft law of the first amendment to the unified retirement law number 9 for the year 2014 submitted by the financial and legal committees.

The deputies’ interventions focused on the importance of reducing the powers granted to the Prime Minister in the law, especially extending the service and granting job titles. In particular to address the referrals of retirees of special grades and demand to preserve the entitlements of martyrs and political prisoners and not to prejudice in the amendment of the unified retirement law as a law, and call for the inclusion of employees of the mixed sector procedures D rather than social security and claim the exception of the Federal Court of measures to amend the law.

Iraqi President Barham Saleh announced that Prime Minister Adel Abdul Mahdi had agreed to resign, but demanded an understanding on an acceptable alternative within the framework of the constitution.

Saleh said in a speech, “The Prime Minister has agreed to submit his resignation, asking the political blocs to reach an acceptable alternative, in light of the commitment to constitutional and legal contexts and to prevent a constitutional vacuum.”

He added, “I personally continue consultations and meetings with various blocs, forces and popular actors, in order to bring about the desired reforms and within the constitutional and legal contexts in a way that preserves the stability of Iraq and protects public security and promotes higher national interests, sure that the status quo is unsustainable. We really need changes.” Big must be done. ”

“The demands of the Iraqi people have put us to the test,” he said. “In the grievances and adversity, the true and sincere men and the real men of the homeland appear to make the tribulation and adversity a means of leapfrogging, advancement and progress. .

The President of the Republic, “Whether we are a government, parliament or popular events, the responsibility binds us all to protect the country from tampering and bad intentions of those who are abusive as it obliges us to get rid of corruption and spoilers, so I invite you and I call ourselves to protect our country and preserve the peaceful demonstrations so that we can all achieve the demands Iraq is healthy. ”

“I am with you, and I will remain so, and I will do my best to implement the true demands. I follow with exceptional interest the investigation of the martyrs and the wounded. My heart and deep feelings with their generous families deserve all fairness and appreciation from the state. Otherwise, there is no good in a position no matter how high and big if he did not do justice to the oppressed and save a poor from his poverty and protect a country and cherish his children. Iraq deserves a lot from us. ”

The President of the Republic, during a television broadcast today, that the Prime Minister agreed to submit his resignation, demanding the blocks to choose the appropriate alternative.

President Saleh added that corruption files were referred to the judiciary.

President Saleh revealed that a national dialogue is underway in the presidency to discuss the structural imbalances in the system of government, in accordance with the constitutional and democratic contexts, and works to achieve the demand of Iraqis in the rule of Rashid.

Iraq has witnessed several demonstrations in various cities during the month, demanding the elimination of corruption and the provision of employment opportunities, which resulted in the occurrence of many martyrs. 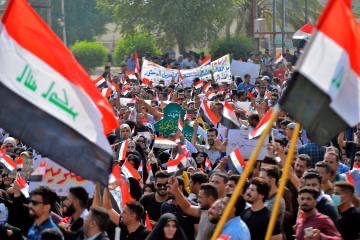 The Iraqi president added in a speech to the nation on Thursday that Iraqi Prime Minister Adel Abdul Mahdi expressed his approval to the parliamentary blocs to resign immediately after the adoption of the new election law and provided a consensus on a political figure to run the country’s affairs so as not to create a constitutional vacuum.