{Baghdad: Euphrates News} returned President Fuad Masum, on Thursday, to the capital of Baghdad.
According to a presidential statement, received by the agency {Euphrates News}, a copy of it, the infallible “arrived on Thursday evening to the capital Baghdad from Erbil, and participated in the funeral of the General Coordinator of the movement of change Nushirwan Mustafa in the city of Sulaymaniyah.”
The leader of the MDC Nushirwan Mustafa, died last Friday, in the province of Sulaymaniyah, after a long struggle with the disease .anthy
http://alforatnews.com/modules/news/article.php?storyid=143392

Twilight News / coming, commander of Nineveh campaign on Thursday called on residents of areas that are still under the control of the organization Daesh most notably the old area in the right Alsagl connector to leave the “immediately” for their safety.

Yar said God, “completed your armed forces with the help of God and the mettle heroes destroy the enemy Aldaasha across the right areas of the coast (west side), and the remaining remnants of trying to tamper with the lives of civilians in your areas as human shields and your use.”

He added that “the Iraqi government and the Commanding General (Armed Forces Haider al-Abadi) are keen and you are responsible for your safety and insisting on the complete liberation for every inch of the land of Iraq.”

Addressing the Yar God’s people, saying, “To achieve these goals and Tjnepkm any losses want the enemy argument for your oppression, and to give way to your armed forces to complete their tasks in editing quickly, I ask all of you to go out and go immediately to the safe passages Snhddha you in the field. You will find waiting for guides and protections and wheels Touselkm to safe places. “

This call signaling to launch an imminent attack on the old area in Mosul, which formed a major obstacle to the progress of the Iraqi forces over the past weeks as a result of the narrow alleys crowded with civilians.

It is likely that the region will be the scene of the last battle in Mosul, which Iraqi forces began an offensive to recover in October / October last. 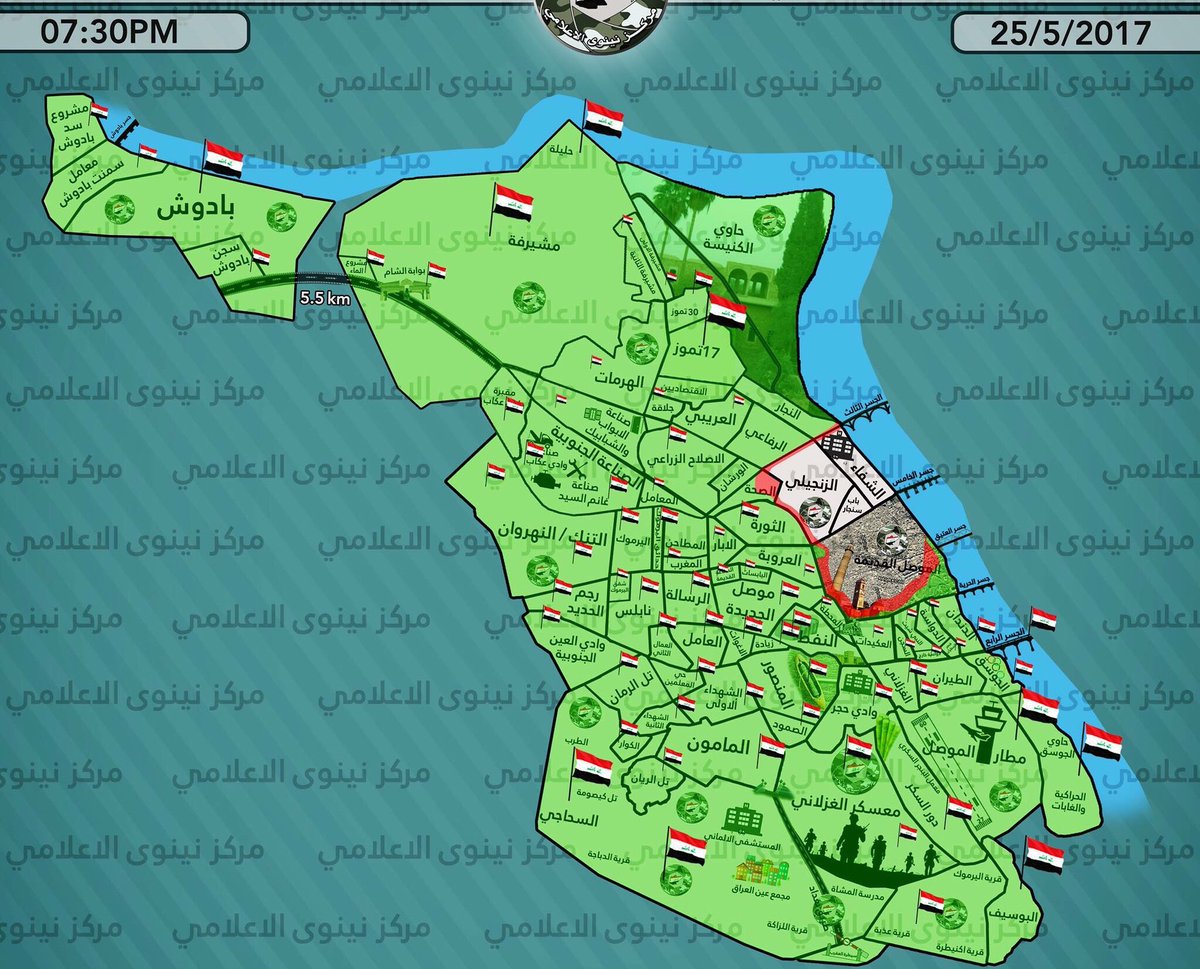 {Baghdad: Euphrates News} Air Force dropped on Thursday, hundreds of thousands of leaflets on the people side of the right center of the city of Mosul.

According to a statement to the media war, the agency received {Euphrates News}, a copy of it, “thrown shortly before the Iraqi Air Force planes, hundreds of thousands of publications on the non – liberated areas in the right side of the center conductor urges citizens to get out through safe corridors toward the security forces.”

The media war, announced today, ” the enemy Aldaasha destruction across the right areas of the coast”, calling on civilians to “go out and go immediately to the safe corridors Snhddha you field” .anthy

Twilight News / announced that the Ministry of Awqaf and Religious Affairs in the government of the Kurdistan Region, on Saturday the first day of the month of Ramadan.

The ministry said on Friday complementary to the month of Shaaban, to be on Saturday, 05.27.2017 the first day of the month of Ramadan.

Twilight News anti – terrorist forces / control organization said that “Daesh Islamic state” in the western side of the city of Mosul , an area (north) “shrunk to 5%, from about 10% of the middle of this month.”
Indicated that it will participate in the liberation of the ancient city of Mosul battles, the most problematic areas in the fighting; the narrow alleys and snipers spread of the Islamic state Daesh, is expected to resolve the battles over the next ten days.

Since February 19, the security of Iraq forces are fighting, with support from the international coalition, to regain control of the western side of Mosul, the Nineveh province, having completed, on 24 January, the control of the eastern side, as part of a military campaign was launched on 17 October .

Guest of the seminar: Hisham al-Hashemi – a strategic expert and researcher on security issues 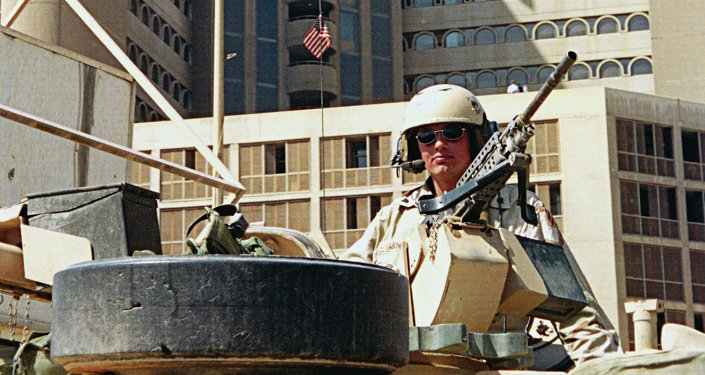 Will Iraq soon declare its full and final victory over a preacher?

The seminar discusses the rapid military progress of the Iraqi forces towards the right-hand side of the city of Mosul and the arrival of special combat reinforcements there as part of the ongoing preparations to break into the old area for the purpose of recovering them from the control of the “Daash” organization.The organization “Daqash” has been holed up in this area of ​​overcrowding and the narrow streets and construction of the dilapidated, which is not allowed to enter the military wheels.

The joint security forces, with the participation of the popular crowd, carried out a military operation on 19 February to restore the right side of the city of Mosul to remove elements of the organization “Daash” from the last stronghold in the country, and was able to restore about 90% of the areas of the right coast of the city, From recovering the entire left side on 24 January.

The seminar also discusses allegations of abuse, torture and killing of civilians by security forces during a campaign to expel the Daash organization from the city of Mosul.Last week, German magazine Der Spiegel published a report that included photographs of what appeared to be torture scenes taken by a photographer who collaborated with the Iraqi Intervention Rapid Response Squad. The photos showed detainees held accused of belonging to or sympathizing with a “preacher.” The journalist wrote that the prisoners had been subjected to torture that led to death, and were raped and stabbed.

The Rapid Intervention Squad is one of the government’s security services that has helped to expel Dahesh from all parts of Mosul except for a pocket in the western part of the city in seven months of fighting.

“The decision of the Minister of Interior to form a committee to investigate allegations of violations against detainees is a correct step and should be strengthened in coordination with the Ministry of Foreign Affairs to follow up the evidence and documents available to the German magazine to investigate and investigate the suspects,” said Hashemi Hashemi.In an interview with the Panorama program, al-Hashemi said it was not too early for Iraqi forces to begin announcing their final victory in Mosul, given that less than 3 percent of Mosul’s total area remained under the control of Da’ash.

He added that the organization “lost its ability to surprise or initiative or even to open gaps to escape, and all he does is sniper operations and suicide operations and hide behind the citizens who take them hostage.”

On the causes of displacement of large numbers of citizens of Mosul, al-Hashemi related primarily to the indiscriminate bombing of the extremist organization, which caused the deaths of many citizens, in addition to the survival of citizens trapped for more than 6 months, so they have very large food and health needs, The city’s population is driven away. “

On the rumors about taking the Iranian Revolutionary Guard positions inside the city and active under the cover of the popular crowd, the Iraqi expert said that during his tour of the city did not stand on any office advertised to these forces, either as advisers or fighters, especially that the Popular Forces and allied forces did not open headquarters Only in the Nineveh stream and under its party titles and not under its military titles. “

Twilight News / Engineer Abu Mahdi / leadership popular crowd on Wednesday announced the launch of the second page of the second phase of operations Muhammad, the Messenger of Allah to liberate the rest of the west of Kairouan and Baaj areas.

The engineer said in a statement posted on the official website of the crowd, “It began this evening, the second page of the second phase of operations Muhammad, the Messenger of Allah (may Allah bless him and his family) under the slogan (the martyrs of Sinjar).”

“The page aimed at freeing the rest of the western regions of Kairouan and Baaj district leading to the Iraqi-Syrian border.”