Demonstrators arrived in Tahrir Square now, and spread the ground amid a security deployment to participate in the demonstration scheduled to start on Tuesday.

Activists on social networking sites in the last days of October 1 (today) set a date to demonstrate “against corruption and unemployment and what suffered by the holders of higher degrees in their sit-ins to disperse violence.”

An eyewitness told the Euphrates News that there are “scattered numbers in the sides of the square in addition to people coming from afar expected that they are coming to the demonstration.”

He added: “I passed in the yard after the end of my work late to my house and I could not count the numbers of those.” is over 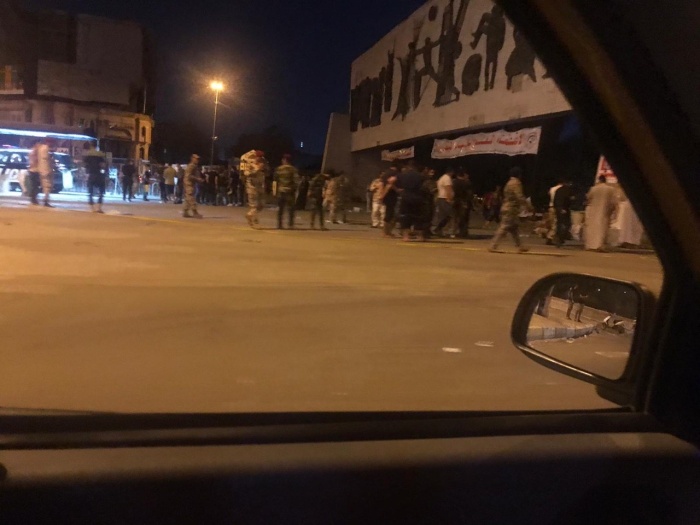 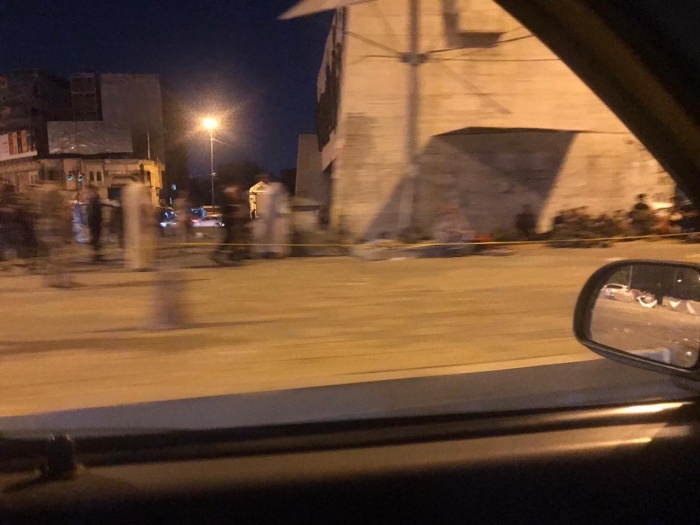 A member of the Iraqi parliament, from Nineveh province, MP Ahmed al-Jubouri, called on Monday, Iraqi Prime Minister Adel Abdul Mahdi to issue an order to remove all images of Iranian leaders from Mosul and other Iraqi provinces, in order to preserve the sovereignty of Iraq.

Al-Jubouri’s call came after Abdul Mahdi issued a decision to raise the statue of Lieutenant General Abdul Wahab al-Saadi, which was recently erected in the city of Mosul. In a tweet on his Twitter page, he addressed Iraqi Prime Minister Adel Abdul Mahdi by saying, “The respectable Iraqi prime minister.” We respect your decision to raise the statue of Abdul Wahab al-Saadi in Mosul .. We ask you to issue an order to lift all the pictures of Iranian leaders from Mosul, and the rest of the provinces .. In order to preserve the sovereignty, and Iraqi dignity ».

There are many images of Iranian military leaders and clerics in the main squares and intersections in major Iraqi cities such as Baghdad, Nineveh, and Basra.

Activists from the province of Nineveh confirmed that the leadership of the province’s operations prevented them, the day before Sunday, the unveiling of the statue of Lieutenant-General Abdul Wahab al-Saadi, commander of the recently dismissed counter-terrorism forces.

On the other hand, according to a statement issued by the Iraqi Ministry of Defense, at dawn on Monday, to join the Saadi team, the ministry as of Monday. Saadi has confirmed that he is a soldier, and will comply with the orders of the commander in chief of the armed forces. He also pointed out that he was exploited by Baathist sites and pages, noting that he is not allowed in any way to be a tool in the name of those who are waiting to break the law, or destabilize public order, and stability in the Iraqi state.

In addition, he explained that he will implement the order of the Commander-in-Chief of the armed forces to prevent sedition, and will present himself for early retirement.

The decision of Abdul Mahdi, the exclusion of Saadi, who played a major role in the battles against the «Islamic State», has aroused anger in Iraq over the past two days, amid questions about the reasons for the decision. Diwani’s order, which issued the transfer of al-Saadi did not mention the reasons for the decision, but observers saw it as a result of internal division between the forces and parties in force, as well as external interference in security and defense affairs, especially between Iraq’s two major allies, the United States and Iran. For their part, some considered that the process of excluding Saadi is nothing but revenge and liquidation of internal accounts.

Former Prime Minister Haider al-Abadi criticized the decision in a tweet on Twitter, saying, “What is the state rewarding its fighters who defended the homeland? Has the sale of positions reached the military and security establishment »?

Interior Minister Reaper Ahmed stressed the need not to prejudice the salaries of employees, pointing out that Baghdad and the region agree to continue the payment of salaries.

The delegation of the Kurdistan region had met during the past week, with the Minister of Finance, Fuad Hussein, on the draft budget law for fiscal year 2020.

The magazine “Kolan” quoted the Minister of Interior in the Kurdistan region, Reaper Ahmed, that the governments of the region and Baghdad, agree on the need not to prejudice the salaries of employees of the Kurdistan region, during the ongoing talks between the two sides, explaining that salaries are the constitutional rights of citizens.

He added: The talks are still going on between the two sides, not on the salaries of employees, but other problems outstanding between Baghdad and the region, expressing optimism to reach important gains.

Al-Madar got the demands of a demonstration tomorrow (Tuesday, October 1, 2019) that will be launched in Bashtak.

And legislation the law from where you get this.

2. Preventing the interference of political parties and blocs in government work, separating political entitlement from government positions and establishing the Federal Service Council.

3 – Formation of the Construction Council, which consists of specialists to be responsible for all projects and future plans of the country.

4. Really support the private sector, protect the domestic product to eliminate unemployment, move the local economy, maintain foreign currency within the country and open the door for real domestic and foreign investments.

5 – Cancellation of the currency auction and the adoption of free market policy.

6. To confine arms to the State in a genuine manner and to abolish all armed manifestations and the militarization of society.

7- Restructuring all government sectors, especially the service ones, to be real productive sectors.

8 – Restructuring and organization of the institution of education and fast and urgent in order to produce a successful educational sector according to international standards.

9. Amending the Electoral Law to be a fair law and preserving the rights of all. 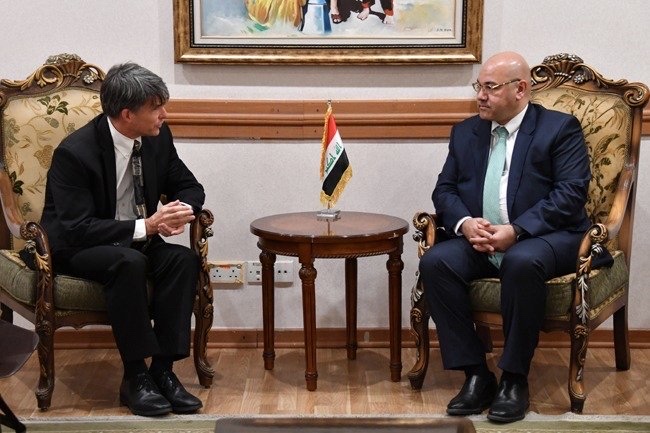 Iraq and the United States of America agreed on the necessity to continue efforts to activate the Strategic Framework Agreement and ways to promote it to serve the common interests between the two friendly countries. 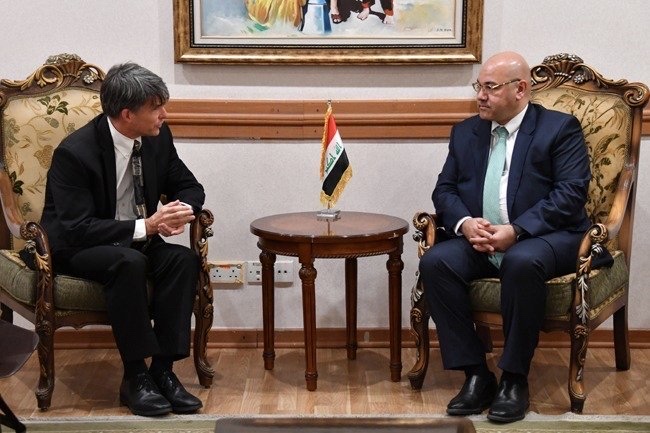 Ambassador Lukman Abdul Rahim al-Faili, head of the US Department of State, met at the State Department with the deputy head of the mission at the US Embassy in Baghdad, Brian McFitters.

The two sides discussed “the latest developments in the relationship between the two countries, and agreed on the need to continue efforts to activate the strategic framework agreement and ways to promote it in a way that serves the common interests between the two friendly countries.”

For his part, the US official expressed his thanks and appreciation for the contribution of the Iraqi Foreign Ministry in enhancing relations between the two countries in all fields.

BAGHDAD: The central bank, on Monday, banks to provide services via mobile phone.

The Central Bank said in a statement received (Euphrates News) a copy of it, that “in the light of the strategy of the Central Bank of Iraq to achieve financial inclusion, and improve digital banking services, and modern technologies, to ensure easy access to those services provided to different segments of society, and this bank directed all licensed banks to provide a service “Mobile Banking application, which ensures the facilitation of the banking service for beneficiaries, and ensure the availability of protection and confidentiality systems for them, to be implemented within a specified period of time from the date of instructions from this bank.”

The central announced a link for instructions: 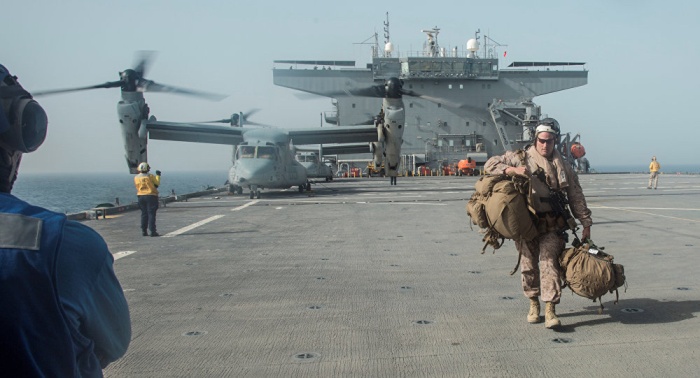 The US consul in Erbil has sent a letter of understanding and joint action to the ministry, the Peshmerga Ministry in the Kurdistan Regional Government announced Sunday, adding that the Pentagon has extended the memorandum of understanding to support Iraq and the Kurdistan region for an additional two years.

Peshmerga Minister Shoresh Ismail received the US Consul General in Erbil, Stephen Vision, adding that the Pentagon’s decision to extend the memorandum of understanding to support the Iraqi army and Kurdistan Peshmerga as part of the Iraqi defense Two more years.

The statement added that the Peshmerga Minister praised the current and previous efforts and steps of the US forces and their government, which had a prominent and influential role in cooperating with and sending aid to the Peshmerga forces in the face of terrorism and terrorists in the region.

He pointed out that this resolution demonstrates commitment, loyalty and sincere joint action towards maintaining security and stability in the region.

The statement pointed out that the US Consul General in Erbil pointed out during the meeting that the decision to extend the memorandum of understanding will have an impact in continuing to provide assistance and support to the regional government and Peshmerga forces in a way that shows that America wants a positive factor between Erbil and Baghdad in the development of relations and address problems between the two sides.

The Peshmerga Ministry announced the extension of US support and assistance to Peshmerga forces for another two years.

According to a ministry statement on Wednesday, Peshmerga Minister Shoresh Ismail received today the US Consul General in Arbil, Stephen Vision, where the two sides discussed the decision of the Pentagon to extend support to the Peshmerga forces.

According to the statement, the United States reaffirmed its support for the army and Peshmerga forces, and extend assistance to the Peshmerga forces for two years as part of the Iraqi defense system.

(Baghdad: Euphrates News) The Rapporteur of the Committee on Energy and Natural Resources in the Parliament of Kurdistan Sarko Azad, the monitoring of more than 600 billion dinars for the Peshmerga forces by Baghdad.

Sarko Azad said in a press statement that “the federal government expressed its agreement to send salaries of nine months to the Peshmerga forces,” explaining that “the agreement between Baghdad and the region in the interest of both sides.”

Azad confirmed that “Baghdad has pledged to send salaries of nine months to the forces of Kurdistan Peshmerga,” noting that “the total amount of 612 billion dinars.”