Threatened the President of Kurdistan Parliament of Iraq Yusuf Mohammed, on Sunday, that the Kurdistan Regional Government will resort to other ways in the absence of the central government’s commitment to the agreement signed between them, and as warned for “major conflicts if the Constitution does not achieve economic and political stability”, he stressed that the right of the provincial government to have an independent economy.

Said Yusuf Mohammed in a speech during his participation in the graduation ceremony of the American University students in Sulaymaniyah, that “If the Constitution does not bring political and economic stability for the long term, it will cause to bring in bigger ones, as is happening in the surrounding countries,” referring to efforts to write a new constitution the Kurdistan region.

In another context, Mohammed stressed that “if Baghdad did not comply with the agreement and the laws of Arbil may resort to other ways,” pointing out that “the provincial government responsible in front of the Parliament of Kurdistan secured budget and the salaries of the people of Kurdistan.”

Muhammad explained that “the right of the provincial government to have an independent economy,” noting that “the government has taken appropriate measures to achieve this goal.”

Interior Minister Mohammed Salem Ghabban that “there are 85% of our armed forces on the ground in the capital, stressing that” we communicate continuously between all the security services in the ministries of defense, interior and national security, etc., to follow up the security of citizens. ”

Said Ghabban in a statement singled out by the reporter for News Agency (et) that “the relationship between the Interior Ministry and Parliamentary Committee complementary and there is constant communication between all the security services in the Ministry of Defense to follow up the security of citizens, noting” that “85% of the armed forces on the ground in the capital are Interior Ministry and army forces are either Vetoagdaa limited in some regions and cities of Baghdad. ”

He explained that “the causes of security breaches need to be considered in-depth and diagnosis with all parties concerned to achieve and maintain the security of citizens and the country,” stressing that “the relationship between the ministry and parliamentary committee complementary and there is constant communication between all the security services in the ministries of Defense and Interior to follow up the security of citizens and there is no holiday in security work “. 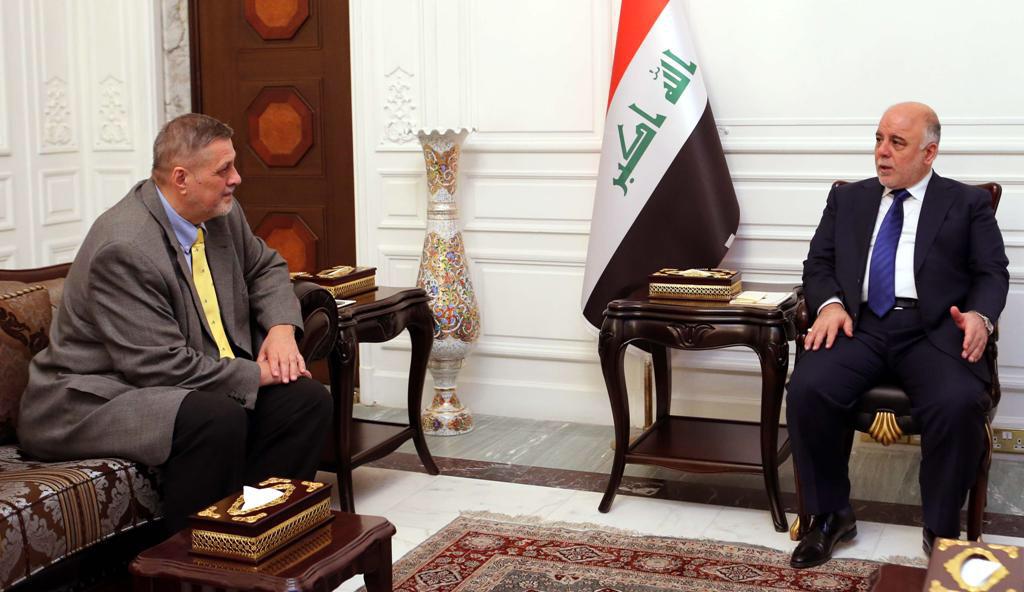 Mr. Prime Minister, Dr. Haider Abadi appreciates campaign # mobilized launched by the youth Maysan province, a campaign calling to volunteer self-esteem and money to support the government’s efforts and the crowd popular in the battle of Iraq against Daash gangs terrorist. He sovereignty thanks and appreciation for intellectuals, writers and artists from inside and outside Iraq and activists from all over Iraq who organized this national campaign and took part, and that enhance the morale and the steadfastness of our heroine, and the sons of the popular crowd those who care about on the road to victory and disinfect every corner of our land and our cities and dear, and reflects the high sense for our young people responsibility towards their people and their homeland

[Maysan – where]
Oil Minister Adel Abdul-Mahdi, from Iraq to achieve self-sufficiency in the production of liquid gas.
Abdul-Mahdi said in a press conference held after the meeting with deliberative conservatives in Maysan province, attended by the correspondent Agency all of Iraq [where] that “investing large amounts of liquid and gas today we have achieved self-sufficiency of it we do not need to import” followed ..
http://translate.google.com/translate?hl=en&sl=ar&u=http://www.alliraqnews.com/&prev=search

Paris will host leaders from at least 60 countries who are part of the international campaign to combat the Islamic State group in Iraq and Syria. Iran, which has been highly active against ISIS in Iraq, but is wary of supporting any action against its ally Bashar al-Assad in Syria, is not invited.

According to the statement, US Secretary of State John Kerry and French Foreign Minister Laurent Fabius will attend the summit slated for June 2.

Fabius announced earlier the Iraq crisis will be the “central” theme of the meeting, but added it was “not impossible” that Syria will also be part of the talks.

Paris previously hosted a similar meeting in September 2014 to discuss a strategy to fight ISIS in Syria and Iraq. ISIS is now believed to be in control of half of Syria and one third of Iraq.

Parliamentary: Baghdad will send a greater amount to the Kurdistan this month

Kurdish parliamentary revealed in the Iraqi parliament, on Sunday, expects to receive a sum of money the province of Kurdistan bigger than Baghdad this month, noting that the province has given Baghdad to pay dues or else find an alternative route.
She said a Syrian MP Nada Mirgah, the reporter “Basenyoz”, “The Kurdistan Regional Government confirmed the sincerity of his intentions on the agreement with the Iraqi federal government, while Baghdad has not adhered to the agreement did not send the necessary budget for the Kurdistan Region has cited a variety of pretexts.”
She stressed that the parliamentary Kurdish Kurdistan Regional Government Baghdad granted greater opportunity to comply with the agreement, we hope that it compensate the Baghdad provincial budgets for the past few months, which has carved out such large sums.
She drew Mirgah Syrian, that “marks” for the kind of flexibility in the Iraqi government and parliament positions, and after he learned that the province has other options.
She added: “I expect to send a larger budget for Baghdad province from oil sales for the fifth month of the year and make up the missed months”.
In conclusion, saying “if Baghdad continued Panthakadtha the province of Kurdistan he can complain to the Federal Court and sells its oil independently.”

Elements in the popular crowd forces in Anbar

Iraqi security forces announced progress in the areas of East and Husaybah Alhjarih east of Ramadi, and its control over parts of the neighborhood within the city of nationalization.

The commander of the rapid reaction forces Brigadier General Nasser Al-Fartusi told the channel “free” The security forces began the attack on the three axes of gray with the participation of the popular crowd and the sons of tribal forces.

This comes as the Security sources reported progress toward Fallujah security forces, after their success in organizing the expulsion of the Islamic State Daash fighters of the regions of blather and Nazim division north of the city.

And it announced that security leaders in Anbar province, the military-backed factions of the popular crowd managed to free agricultural areas Daash exploit the militants to carry out their operations.

A spokesman for the tribal vine Ahmed Jumaili told the “Radio Sawa” The “popular crowd forces launched a large-cleansing campaign in the southern areas of the city of Ramadi, areas considered as a major conduit for Daash gangs that come from Syria.”

Iraq’s three presidencies held a meeting to discuss the security and political situation in the country and reporter for the change that the meeting, which was held under the chairmanship of President of the Republic Fuad Masum, the presence and Parliament Speaker Salim al-Jubouri and Prime Minister Haider al-Abadi and their deputies discuss the developments of the military situation and the ways of eliminating the organization Daash.
He pointed out that the conferees also Tbagesoa in the political file and relations of Iraq’s foreign and international support for the Iraqi government for his part, Vice President Iyad Allawi called for activating the Iraqi army’s role and limit military activities under the government umbrella and issuing special amnesty for some of the icons in the event of adopting hostile attitudes of extremism and called for Allawi presidencies three to adopt a clear political and military strategy to counter the organization Daash, terrorism and achieve national reconciliation as a whole.