On 16 December 2020, the Security Council Committee established pursuant to resolution 1518 (2003) approved the removal of the following entity from its List of Individuals and Entities subject to the assets freeze set out by paragraphs 19 and 23 of Security Council resolution 1483 (2003) adopted under Chapter VII of the Charter of the United Nations:

B. Entities and other groups

The names of individuals and entities removed from Committee’s Sanctions  List pursuant to a decision by the Committee may be found in the “Press Releases” section on the Committee’s website at:  www.un.org/sc/suborg/en/sanctions/1518/press-releases.

The Independent / – The Iraqi government will start implementing the electronic payment system for exporters and importers, as of mid-January.

The director of the General Company for Iraqi Fairs and Commercial Services, Sarmad Taha Saeed, told the Iraqi News Agency “INA” that the company has signed a contract with the Central Bank regarding electronic payment, as it will be the middle of next month to implement the electronic payment system, which will allow exporters and importers to pay with any card Available.

He added that “attractive offers were made to the exporters, by giving 10% of the invoice value free of charge, in support of the Iraqi exporter, as our goal is not only to export, but to be the transfer in Iraqi banks, and to provide hard currency.”

He pointed out that “the Council of Ministers previously issued a decision to make the export absolute, but we were surprised to stop exporting most of the materials due to the existence of laws that contradict the decision.”

He explained that “when traders started exporting, they were surprised to stop exporting gravel, aluminum products, etc., as we must obtain sectoral approvals, after which export is allowed.”

The General Secretariat of the Council of Ministers has set, next Monday, the date for the start of the official working hours for the new year.

“On the occasion of the anniversary of the birth of Jesus (PBUH) and the New Year holidays, we extend our congratulations and congratulations to our Christian families and the sons of our dear Iraqi people, and we look forward to more stability, security and construction,” the secretariat said in a statement received by “People”. “.

The statement added that “the start of the official working hours for the new year will be on Monday 1/4/2021.”

The Committee for Freezing Terrorist Funds of the Central Bank of Iraq announced the issuance of a Security Council / International Sanctions Committee decision to remove its sanctions against Rafidain Bank, which were issued during the era of the previous regime in 2003.

Full details in the document shown inside the news.

General Secretariat for the Council of Ministers

Shafaq News / The Iraq Stock Exchange announced, on Thursday, that its activities will stop for one day on the occasion of New Year’s Day.

The market said in a statement received by Shafaq News, that “based on the decision of the General Secretariat of the Council of Ministers considering Sunday as an official holiday on the occasion of the New Year, it was decided not to organize the trading session for that day.”

The statement added, “The sessions will be organized as of Monday, the fourth of January, according to their official timing.”

It is noteworthy that the Iraq Stock Exchange has used electronic trading and central depository systems since 2009 and seeks to launch the Internet trading system for investors, and organizes five trading sessions per week from Sunday to Thursday, and 105 Iraqi joint stock companies are included in it representing the sectors of banking, communications, industry, agriculture, insurance, financial investment and tourism And hotels.

On Thursday, the President of the Iraqi Kurdistan Regional Government, Masrour Barzani, expressed his hope for the implementation of the recent agreement between Erbil and Baghdad regarding the 2021 budget .

He added, “We have reached an agreement with the federal government regarding the draft federal budget for the year 2021, we hope that the agreement will be implemented in full, and we ask the political parties in Iraq, and from now on, not to accept the use of Kurdistan Region’s dues and rights as a political pressure card against the people of Kurdistan who do not.” His rights are still being denied, affirming at the same time that we will never compromise our constitutional rights . ”

The Parliamentary Finance Committee confirmed today, Thursday, that the new budget is the largest in the Arab world after Saudi Arabia, while the currency selling window was accused of “currency smuggling” according to a systematic work .

A member of the committee, MP Muhammad Al-Darraji, said in a press statement, “The 2021 budget amounts to 164 trillion dinars, in which oil is set at $ 42 a barrel,” indicating that “salaries expenditures in the budget amount to 53.8 trillion dinars .

He added, “The debts payable in the budget are estimated at more than 16 trillion dinars, pointing out that operating expenses amount to about 50 trillion dinars .”

He explained, “The budget is devoid of job grades,” noting that “the 2021 budget does not differ from its predecessors except in numbers, as it is the second largest budget in the Arab world after Saudi Arabia .”

He revealed “there are attempts to withdraw the Iraqi dinar from the local markets and put large quantities of the (green) dollar into the market,” noting that “these quantities come from the Kurdistan region .”

He called on the government and security agencies to scrutinize the sale of hard currency and find out where the source of this dollar comes from, stressing that “the sums of sale of the region’s oil enter Baghdad illegally to take advantage of the currency difference .”

The number of readings 84

Baghdad / Obelisk: On Thursday, December 31, 2020, the exchange rate of the US dollar recorded a new high against the Iraqi dinar in the Iraqi markets and local banking offices. 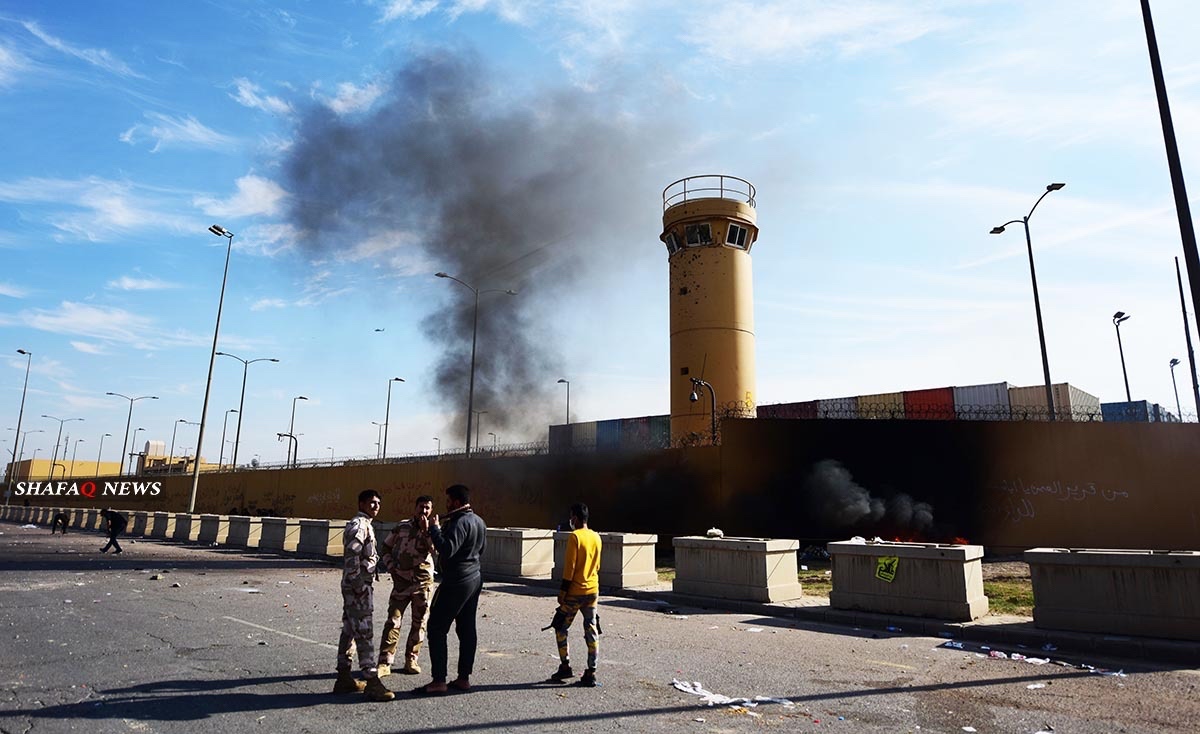 Shafaq News / On Wednesday evening, a security source revealed that tight security measures have been taken in the Green Zone in the center of the capital, and the vicinity of Baghdad International Airport, in anticipation of any security development, indicating that these precautions came after information indicating attempts to target US interests in Iraq.

The source told Shafaq News, “Tight security measures have been taken around the open spaces surrounding the International Green Zone and Baghdad International Airport, specifically in the areas of Radwaniyah, Al-Jihad, Amiriyah, and Abu Ghraib, which surround the airport and the capital, Baghdad.”

He pointed out that “the measures also included the Dora area south of Baghdad, and the Rasheed camp in the southeast of Baghdad, areas from which rockets are usually launched to specifically target the Green Zone and the US embassy.”

The source pointed out that “the armed factions usually threaten, via social media, to launch attacks by various armed means, but the information currently available indicates that there are attempts for non-missile attacks.”

The source indicated that “it was assumed today that the American defense system would be tested inside the military base at Baghdad airport, but it was canceled or postponed for unknown reasons,” noting that “the American Victoria base adjacent to an Iraqi air base was ready to deal with any hostile attack.” “.

According to the source, the security deployment in the vicinity of those areas that are supposed to be targeted, is limited to the deployment of forces holding the ground and do not have air defense systems, but it seems that he did not disclose the extent of the security concern and tension that surrounds the capital, Baghdad.

Days from now, the Green Zone in the center of the capital, Baghdad, was subjected to missile strikes targeting the US embassy, but it did not inflict any damage on it, and the missiles damaged residential buildings.

The representative of the Iraqi coalition, Hassan Khatti, set, on Wednesday, the date for the discussion of the draft federal budget law for 2021 in the House of Representatives, while revealing the period needed by Parliament to pass the law .

Khatti said that “the House of Representatives will present the budget bill for 2021 for discussion next week,” noting that “Parliament will need six sessions to pass the budget by three weeks .”

He added that “the House of Representatives will refuse to raise the exchange rate of the dollar against the dinar of this size,” noting that “the amendments will include a refusal to impose a tax on the salaries of employees with the exception of the paragraph of higher degrees .”