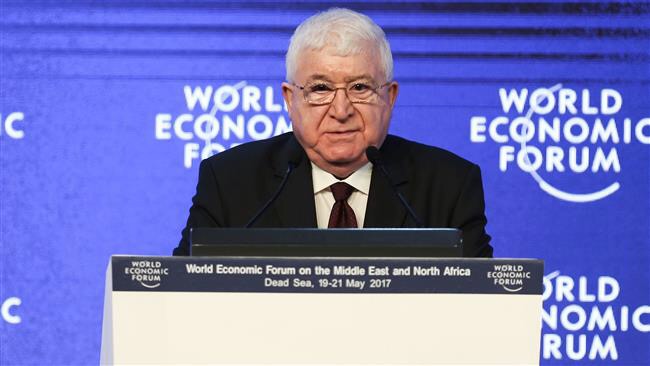 Iraqi President Fuad Masum has voiced hopes that west Mosul will be freed over the next few days as the country’s special forces announce the end of their mission in the city.
“Iraq has achieved a decisive victory over terrorism, but we hope in the next few days to achieve a complete liberation of Mosul,” Masum made the remarks while addressing the World Economic Forum’s regional gathering held in Jordan on Saturday.
He further called on global investors to help rebuild the city, which was overrun by Daesh in 2014.
On Friday, Masum noted that the scope of destruction in the city was “horrendous.”
He added “Iraq is stronger in its unity” and that it “will be an important country after getting rid” of the Takfiri terrorists.
Meanwhile, Iraq’s special forces have declared that their initial mission in Mosul has been completed after they liberated several regions in the city.
Special forces spokesman Sabah al-Numan said that his troops are ready “to support any other forces if we are ordered to by the prime minister.”
Earlier, the Commander of the Iraqi Federal Police Forces Lieutenant General Raed Shaker Jawdat announced that his forces had fully recaptured the 17th July and Eqtesadieen neighborhoods of Mosul, and set up barricades and barriers in the liberated areas.
He added that 66 Daesh terrorists had been killed while 13 explosive-laden cars and nine motorcycle bombs had been destroyed during the operations.

Elements of the Iraqi Rapid Response Force in Mosul.

On Saturday, the military information cell identified the areas under the control of Da’ash in the right-hand coast of Mosul.

The cell said in an official statement conveyed by the site, “Alsumaria News” Iraqi, “The remaining areas under the control of Daed in the Ayman Mosul, is healing and Znagli and health and the first Bab Sinjar and Ras Alkor and field and Farouk.”

The cell noted that some of the areas of the brick door and the new door and the door of the egg is also still under the control of the organization classified as a terrorist at the international level.

The Iraqi army determines the areas west of Mosul under the control of “Daash”.

In this context, the Military Information Cell published a map of the rest of the liberation of the right coast of Mosul.

The map shows that the areas under Da’ash control are a very small part, which the Iraqi army expects to release in the near future.

The United Nations High Commissioner for Refugees has revealed that about 400 thousand Iraqis are still trapped in the west of the city of Mosul.

19 minutes ago
Twilight News / leadership battle Mosul announced the liberation of the biggest revival of Mosul from the grip of Ayman Daesh.

The commander of operations are coming Aaninoy that the federal rapid response brigade 73 band 15 liberation of the southern part of the neighborhood July 17 police forces.
He added that this is the completion of the entire area of ​​July 17 on the right coast of the city of Mosul, and raise the flag on its premises.

Iraqi special forces announced that they had recovered the last neighborhoods in the city of Mosul from the Dahedsh organization within their area of ​​operations after the attack began to restore the western part of the city, which was officially launched in February .

ABC News quoted the Special Forces spokesman Sabah al-Nu’man as saying the troops had completed their mission on Saturday, but Daqash still controls about eight square kilometers of western Mosul, including the Old City, where some of the The strongest battles .

He added that his forces were ready “to support any other forces if they received orders from the Prime Minister .”

The battle to restore Mosul started last October after months of preparation, and swept the city and nearly one third of Iraqi territory during the summer of 2014 .

The United States will need to deploy a long-term military force in Iraq ranging from 10,000 to 20,000 troops after a sensational defeat, according to a senior military and political expert at the Pentagon during George W. Bush’s second term, Eric Edelman.

“It is likely that US forces will range from 10,000 to 8,000 US troops, which are sufficient to supplement the Iraqi security forces to flush out a whole Iraq,” the expert said in a press statement.

“The number could be as high as 20,000,” he said, adding that “the military will act as advisers and complementary soldiers to eliminate the remnants of Dahesh after the expulsion of the last of their forces from Mosul.”

He said that “Iraqi Prime Minister Haider Abadi will probably avoid parliament through executive procedures and his predecessor, Nuri al-Maliki, failed to push the strategic framework agreement through parliament in 2011, causing the calculation of US forces.” For his part, said Professor Hal Brands Professor of International Affairs, John University “There is an inevitable type of permanent US military presence in Iraq,” Hopkins said.

“I hope the 2014 experience has proved the importance of paying a political price to keep US troops in Iraq,” he said.

US diplomats and Iraqi Prime Minister Haider al-Abadi are in the midst of negotiations on a status-of-forces agreement that will detail the long-term US military presence in the country.

The US forces leading the so-called International Alliance are the first accused to assist with the provision of logistical assistance and weapons to them, while striking the Iraqi security forces, which Washington interpreted as a mistake.