An informed political source revealed, at dawn on Friday, that the Shiite political forces have stipulated that the official in charge of forming the government, Mustafa Al-Kazemi, be presented with a full cabinet cabinet free from a former or partisan minister.

The sources told “Al-Akhbariya” that “a meeting in Beit Al-Amiri with the presence of the rule of law and others, victory and wisdom, and in the presence of Al-Kazemi ended with Al-Kazemi authorized to choose the ministerial cabinet within the national criteria, integrity and independence.”

He added: “The conditions included that the cabinet be presented in full with the Ministry of Interior and Defense and that there would be no former minister or partisan in otherwise this ministerial cabinet will not be voted on and the names will be presented before setting a session and after approval it is agreed to hold a session.”

An informed political source revealed, on Thursday, that ten ministries had been decided from the government cabinet of Prime Minister-designate Mustafa Al-Kazemi.

is scheduled to hold a session of parliament next Sunday to give confidence to the government of designate Mustafa Al-Kazemi.

Parliamentary sources told Mawazine News that “it is likely that next Sunday will be a date for a vote on the Al-Kazemi government.”

According to an official statement for Al-Halbousi, that according to the provisions of Article (43 / Second) of the Parliament’s Law, Al-Halbousi decided to form a committee headed by First Deputy Hassan Al-Kaabi and the membership of a number of deputies and advisers to study the ministerial curriculum and submit a report to the parliament on it. End 29 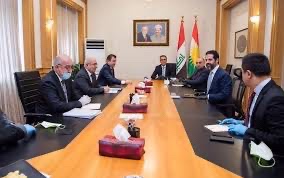 Akhbariya : The head of the Kurdistan Democratic Party, Fian Sabri, affirmed on Wednesday that the Kurdish delegation will stay for three days to discuss solutions with the heads of political blocs.

Sabri said in a televised statement, followed by “Al-Ikhbaria”, that “the Kurdish delegation will stay for three days in Baghdad to engage with the heads of the political blocs.”

She added that “the visit of the Kurdish delegation came after the letter of the General Secretariat of the Council of Ministers on the salaries of the region’s employees,” noting that “the budget share for Kurdistan was cut by the center after the region did not hand over the dues of oil exports.”

He continued, “The region was ready to hand over oil imports to the center, but internal problems prevented that, and the region does not export 600,000 barrels a day.”

Baghdad / .. The resigned Prime Minister, Commander in Chief of the armed forces, Adel Abdul Mahdi, decided to inform the Prime Minister-designate Mustafa Al-Kazemi of all the files that the government will discuss with the American side.

A spokesman for the Commander-in-Chief of the Armed Forces, Abdel Karim Khalaf, said in a statement reported by the official newspaper “Al-Sabah” that “the decision aims to be the Prime Minister-designate fully aware of all the topics that will be discussed with the United States to follow up and take the necessary steps regarding it after the formation of the new government.”

Khalaf added that “Iraq is currently studying all the files that will be discussed with the United States of America and discussing them with the various parties concerned with these files for their maturity and presenting them to the Prime Minister before the start of negotiations.”

He pointed out that “the files are not limited to the security side, but also relate to the strategic relationship between the two countries, as well as include the economic, political as well as cultural areas established within the strategic framework agreement.”

Shafak News / Informed sources revealed, today, Thursday, that political forces informed Prime Minister-designate Mustafa Al-Kazemi not to vote on the ministerial curriculum presented by the latter to the Iraqi parliament, unless an amendment is made.

The sources said to Shafaaq News, “Most of the Shiite political forces informed Prime Minister-designate Mustafa Al-Kazemi of their reservations regarding the ministerial platform, due to the lack of an explicit date for early elections, and also not including a special paragraph to remove the American and foreign forces from Iraq, according to the decision of the Iraqi parliament.” “.

The sources indicated that “these entities have informed the Prime Minister-designate Mustafa Al-Kazemi that they will not vote on this platform without modifying it and include these two important paragraphs until a vote is taken on it and the implementation of the new government is binding.”

Yesterday, the Prime Minister-designate Mustafa Al-Kazemi signed the Ministerial Curriculum Book for his government and sent him to the Presidency of the Parliament.

A video recording published by his media office today showed Al-Kazemi signed the curriculum, saying in a brief interview, “I sign the ministerial curriculum: Iraq lived as a land, people and national sovereignty.”

“An informed political source had earlier informed Shafak News earlier today that Al-Kazemi had finished the process of forming the cabinet, with the exception of the Ministries of Interior and Defense. There is a deep Shi’a-Shiite dispute over the Interior Ministry, and less disagreement over defense between the Sunni political forces.”

, former Deputy Prime Minister, Bahaa Al-Araji, said Thursday that the government has started to act with this currency reserve, which means we are facing an unknown country in the future.

Al-Araji tweeted, through “tensioning”, that “oil imports do not exceed $ 50 million per day after paying the costs of production.”

He added, “It is noticed that the central bank sold through the currency auction for 10 days, up to 150 million per day, which means that our government began to act with currency reserves, so if the crisis persists for six months, this means that we are facing a” unknown future “country. A43