Cabinet decides to accelerate the procedures of the national card

The Iraqi Council of Ministers announced on Tuesday the decisions of its meeting held today, headed by Prime Minister Haider Abadi, indicating that he hastened to accelerate the procedures of the national card in Baghdad and the provinces.

The council said in a statement read by the Rawdaw Media Network that it held its regular session on Tuesday 30 May 2017 under the chairmanship of Prime Minister Haider Al-Abbadi. The Council discussed the issue of investment in the integrated residential project in Maysan Governorate. The Council instructed that the National Investment Commission complete the required details in the light of what At the cabinet meeting. “

He added that he “voted to raise the sponsor’s condition of granting the loans for the Basmaya project exclusively, and mortgage the housing unit of the banks (Rafidain, Rasheed and Commercial Bank). The Cabinet also voted to conclude a joint contract between the Iraqi Oil Tanker Company and the Arab Maritime Transport Company, Iraq part of its capital. “

The Council directed, according to the statement, to “speed up the procedures of the national card in Baghdad and the provinces, and directed the Ministry of Finance to transfer 25 billion dinars from the budget of the Ministry of Transport to the account of the South Korean company Duo implementation of the draft west breakwater to the port of Faw, and the formation of a committee to negotiate with a company that offered to transmit a project Investment “.

He also directed the Council to “form a committee to review the draft urban planning law, and also expedited the procedures of security audit of staff in the liberated areas of Nineveh province.”

Baghdad / … the security committee in the Nineveh confirmed Monday that the remaining of Ayman al-Mosul under the control of “Daesh” space is only 2%, and while suggesting the possibility of the full liberalization of Mosul announced during the next few hours, she stressed that the organization’s defenses “Daesh” terrorist I saw large collapses as a result of tight siege by security forces.

The committee member said Mohamed Ibrahim’s “Eye of Iraq News,” that “the remaining of Ayman al-Mosul area under the control of” Daesh “is only 2%,” he said, adding that “there is a possibility to announce the release of Mosul fully in the coming hours have remaining pockets only to be processed Just”.

Mohammed explained that “the defenses of the organization” Daesh “terrorist has seen significant collapses as a result of tight siege by security forces,” pointing out that “security forces are progressing according to plans set for them and approaching every moment of the final decisive victory.”

Said Yar God in a statement received by “Eye of Iraq News”, that “hordes of joint forces launched today to liberate the rest of the neighborhood is liberated in the right coast, where he broke into the healing neighborhood army forces and the Republican hospital and stormed the federal police forces Zndjeli neighborhood and broke into the anti-terrorism forces health district first “. Finished 2

Twilight News Iraqi Prime Minister and Commander of the Armed Forces, Haider al-Abadi / stressed on Tuesday that his government is serious to prosecute terrorists, referring to a plan to secure Iraq’s borders and isolate the militants Daesh in Iraq for their colleagues in Syria.

Abadi interview came at a news conference following the weekly meeting of the government.

Ebadi said, “We will not keep one of the terrorists. We are serious to proceed against them”, after the completion of continuing in Mosul for more than seven months, the military campaign.

Abadi added that the plan was developed Beshravh personally and in coordination with the popular crowd to secure Iraq’s border with Syria.

The Prime Minister of Iraq to the plan by saying, “We will start the process of the Iraqi-Syrian border control to isolate Daesh in Syria Daesh Iraq.”

The military engineering the popular crowd had started earlier on Tuesday to dig trenches and build a berm between the Iraqi-Syrian border, which relate to yesterday after fighting for several days against Daesh.

The crowd arrived yesterday for the first time to the Syrian-Iraqi border in the Baaj district west of Mosul. The crowd leaders said their forces would press forward down to eliminate the existing Anbar province.

The crowd and fighting in the west of Mosul towards the Syrian border since the start of the military campaign to restore Mosul Daesh more than seven months.

Iraqi forces approaching the entire city of Mosul, al-Daesh, which ebbed presence in the central square of the city right coast restored. 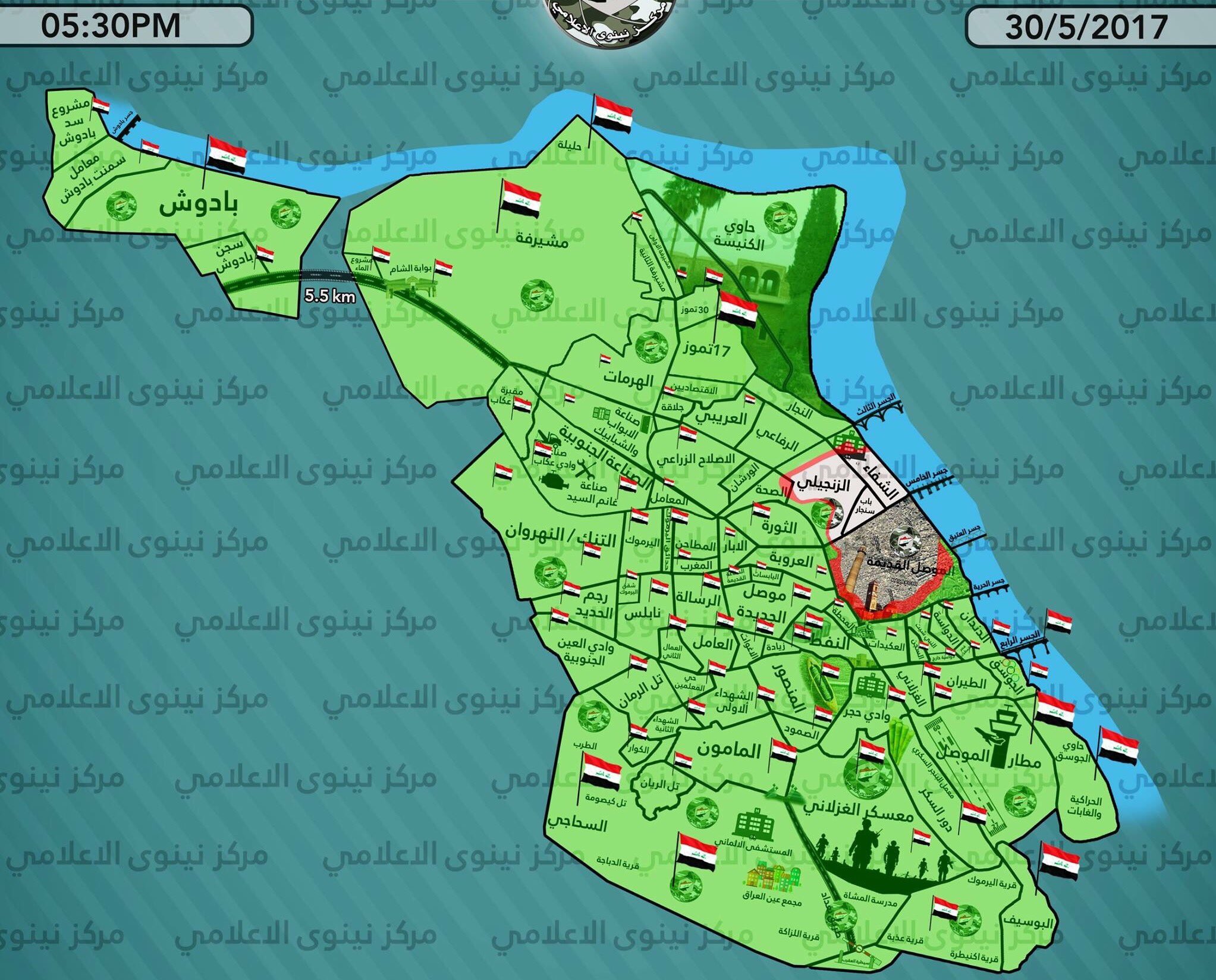 Khandan – said Brett Macgork US president ‘s envoy in the international coalition against the organization “Daesh” terrorist on Tuesday, said that the recovery process of tenderness “Daesh”, will be launched soon.

The new Macgork in a speech at a conference of the Ministry of Foreign Affairs in the Italian capital , Rome, their intention to work with Syria ‘s democratic forces, which form the Kurdish units of its backbone.

He said Macgork in this regard, “We are working here with Syria democratic forces, and we are just two kilometers from tenderness”, as quoted by the agency “Anatolia”.

He added Macgork, that ” the process will start soon, I can not declare anything about the date of its launch but very intimate with .”

Will meet with Foreign Minister Sergei Lavrov and other Russian officials

The Prime Minister of the Kurdistan Region, Nezhirvan Barzani, is expected to arrive in Russia on Wednesday to participate in the World Economic Forum scheduled for June 1 and will continue until the third in the Russian city of St Petersburg.

Maria Zakharova , said at a news conference that Lavrov and Barzani will meet on the sidelines of the World Economic Forum in the Russian city of St. Petersburg.

On the sidelines of the forum, Nechirvan Barzani will meet with a number of officials and leaders of the countries, expected to be the files of the economy and investment opportunities promising in the Kurdistan Region, and the war on the situation and the situation in Iraq and political and security as well as the referendum on independence scheduled to be held in the Kurdistan region before the end of this year of the most prominent The files to be discussed by Barzani in his meetings

[Oan- Baghdad]
Ministry of Communications announced that “this year will see the launch of the national work project of theInternet in Iraq.”
Said ministry spokesman Hazem Mohammed Ali in a statement received by all of Iraq [where] a copy of it, that “after less than a year from the start of the implementation date and during the period of record of the Ministry of Communications has succeeded with the contracting companies with the completion of 93% of theproject to extend the processing of optical cable in all over Iraq , which will be reflected online prices available to citizens in Iraq. ”
” It was set up oversight committees of the ministry reflections reduction on the reality of the citizen sequence effectively , ” noting that ” the network will be secured and protected and owned by the Ministry ofCommunications, and supervised by the ministry in coordination with senior security authorities in Iraq, it will be optical cable international force for the protection of data and information within the gates and emerging and filtered to ensure the security of Iraq. ”
He noted that ” the project promising investment, the state will achieve substantial financial resources from ever wanted, and although the ministry did not bear the costs of the project , but the executing companies tobear all costs for this project.”
He explained that ” the ministry reserves the right to supervise the entire joints of the national project of theInternet in Iraq, where the management will see the launch of Iraq as soon as the service network in theworld, and at a cost less than the current cost of a large proportion.”
http://www.alliraqnews.com/modules/news/article.php?storyid=62440