An informed local source, on Thursday, the start of supporters of the Sadr movement’s withdrawal from the walls of the Green Zone.

The source told / balances News /, that “supporters of the Sadrist movement began Palanhsab from the walls of the Green Zone.”

The source, who spoke on condition of anonymity, said, “This move came after directing the cleric Moqtada al-Sadr that.”

He threatened the cleric Muqtada al-Sadr, today, to withdraw confidence from the Prime Minister Haider al-Abadi in the absence of a parliamentary vote on the minister, while calling for an end to the sit-in with thanked the security forces.

Anrias referred to the Council of Ministers Haider al-Abadi him, on Thursday, the names of the new ministerial cabin closed envelope and leave the ball in the court of parliament, among the new cabinet line-up consists of 16 ministers and inclusive of all components of the Iraqi people .anthy 29

BAGHDAD – Anatolia: Put the IMF package of financial and economic reforms, which would conclude his visit in the middle of this week, after talks lasted nearly two weeks with officials in Baghdad.
Iraq suffers, like other oil-producing countries, the decline in financial revenue as a result of falling crude oil prices by 68 percent, and fighting al «Islamic state» in many cities, and that drained the treasury.
Abdul Hussein Al-Anbuge, Iraqi Prime Minister for Economic Affairs Adviser, on Thursday said that the conditions set by the International Monetary Fund to cope with the financial crisis in Iraq, which fall under the reforms that the government which seeks to reduce economic damage.
He Anbuge «There are not tough conditions imposed on Iraq by the International Monetary Fund in exchange for cash loans. What put the IMF is part of the reforms, but it may have an impact socially unacceptable in the long proximity », adding that« to reduce the damage to be forced to accept certain conditions to face the biggest problem ».
And head of the International Monetary Fund to give Iraq a financial loan demand by June next, which will allow Baghdad to $ 15 billion in international aid over the next three years, according to a statement of Christian Gooch head of the IMF mission in Iraq last Tuesday. The Iraqi official said that «some government institutions began to increase fees, such as the Ministry of Health, which raised the prices of medical services, and the secretariat of Baghdad, which raised the prices of municipal services.
Currently it operates several government committees to determine the possibility of selling some state property such as land, machinery and real estate, residential complexes, which are steps aimed at tackling the financial crisis.
Baghdad agreed in November last year to place the financial and economic policy to control the International Monetary Fund for the years 2015-2016 after the aggravation of the financial crisis because of low oil prices in world markets.
The International Monetary Fund says that the biggest challenge before the agreement on the granting of Baghdad loans worth $ 15 billion will be gradually cut spending to match revenues, allowing the country’s debt to be stabilized by 2020, when 75 percent of GDP.
Iraqi finance officials believe that some of the conditions the International Monetary Fund can not be applied at the current stage, especially those that can strongly affect the level of citizens’ ploy
. He said Sirhan Ahmed, member of the Finance Committee in the Iraqi parliament that among the conditions set by the IMF «raise subsidies for fuel (fuel), and stop the ration card project, and this can not be applied and approved, because it is linked to a wide array of the Iraqi people».
He said Ahmed that «the government will face a problem in raising taxes or creating new doors for the fees, because the law does not give it to issue decrees to raise taxes contrary to what is stipulated in the federal budget for the 2016 law validity», adding that «any increase in taxes the government must go back to parliament for approval. »

Long-Presse / Baghdad
Unseen death, Thursday, architectural Iraqi Zaha Hadid, at the age of 65 years, after suffering a heart attack at a hospital in the US city of Miami.

According to Western media, followed up (range Press), “The famous architectural Iraqi Zaha Hadid, died today influenced by a heart attack at a hospital in the city of Miami, which she was treated by inflammation of the bronchi.”

The Zaha Hadid, who was among the designs Olympics Aquatic Centre building in London, died today at the age of 65 years Enahzal.

.otozaat Architectural designs all over the world, including Hong Kong, Germany and Azerbaijan 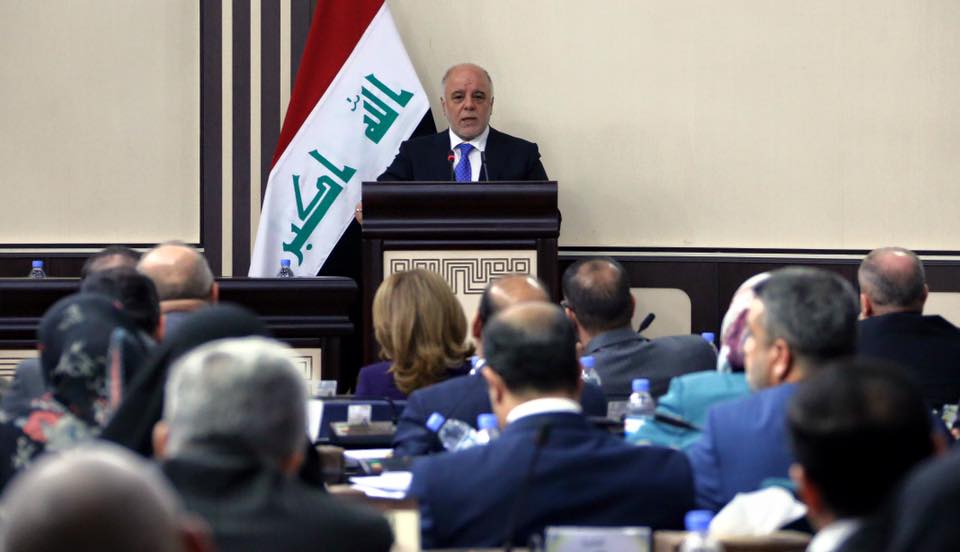 [Wayne – Baghdad]
called the cleric Moqtada al – Sadr, to continue to demonstrate peacefully every Friday, after Friday prayers, in order to put pressure on the House to vote on the cabinet reshuffle Aljdidh..itba
http://alforatnews.com/modules/news/article.php?storyid=112967

[Oan- Baghdad]
published by all of Iraq [where] a list of candidates for Prime Minister Haider al – Abadi to the new ministerial cabin handed over Thursday to the chairman of the parliament for examination within 10 days and display to vote and give them confidence.
And the names of the names of the candidates are as follows:
Ali Allawi – Finance Ministry
Abdul – Razzaq al – Issa – The Ministry of Higher Education and Scientific Research.
Sharif Ali bin al – Hussein – Ministry of Foreign Affairs.
Nizar Salem – Ministry of Oil.
Yusuf al – Asadi – the Ministry of Transport.
Hoshyar faithful messenger – The Ministry of Construction and Housing and municipalities.
Hassan al – Janabi – The Ministry of Agriculture and water resources. [It is Iraq ‘s ambassador to the Food and Agriculture Organization of the United Nations / FAO].
Ali al – Jubouri – the Ministry of Education.
Akil Yusuf – The Ministry of Youth and Culture.
Mohammad Nasrallah – the Ministry of Justice.
Alaa Dshir – the Ministry of Electricity.
Wafa James Baldwin – labor and immigration.
And remained the position of the Ministry of Commerce the industry vacant.
the source close to [where] he was in the government ‘s new limbering integrating both finance and planning ministries, and transportation with communication, and working with the Displacement and migration, and agriculture with water resources, and youth with the culture, and industry with trade “.anthy 14
http://alforatnews.com/

{Baghdad} Euphrates News Parliament Speaker Salim al-Jubouri announced that “next Monday will be distributed biographies new ministers to the members of parliament; for the purpose of study, and a week after the parliament will be the final word where” ..itba h ..
http://alforatnews.com/modules/news/article.php?storyid=112944