On the front line in northwestern Mosul, black smoke from the sky is covered by neighborhoods still under the control of a hasty organization and output, a federal police officer says of fires being waged by jihadists in car tires and oil drums.

In the last stronghold in Mosul, members of the organization are using fire, booby-trapped cars, suicide bombers, mines and mortars to limit the advance of Iraqi forces that have managed to control the eastern part of Mosul for the last few months.

“When the weather is clear, Iraqi aircraft and coalition aircraft can clearly see the movements and concentrations of terrorists and target them accurately,” the officer said, declining to be identified as he tried to urge him to burn tires and barrels of oil whose black smoke limits the ability of these planes to see “He said.

The fighting on this front at the edge of the five pyramidal district shares the federal police forces and rapid response in the face of a hasty organization.

The causes of black smoke are not limited to the burning of tires and fuel. Attacks carried out by suicide bombers with explosives and car bombs also leave black smoke behind.

At a rallying point at the bottom of a hill, AFP reporters saw a red flame suddenly emitted from behind the hill, followed by a huge explosion. “It was a car bomb that the suicide bomber was trying to reach at a rally point for the rapid reaction forces, but a helicopter of the Iraqi forces was intercepting it and hitting it with a missile before reaching its goal by about one kilometer,” said Brigadier General Aref al-Dulaimi, “He said.

“Our driver entered the courtyard of a house where women and children were hiding. They were protected by human shields,” Dulaimi told AFP. “We could not bomb them because it would have killed innocent people. But we kept them under surveillance.”

“Every day five to six attacks are carried out by suicide bombers driving car bombs,” he said.

Some Humvee mechanisms are assembled at the bottom of the hill. “As in the past, they use families and civilians as human shields to stop the advance of our troops towards them,” said officer Diab.

Iraqi forces, supported by the Washington-led international coalition on Oct. 17, began a massive operation to restore Mosul from the Dahesh organization, which seized control in mid-June 2014.

– Journal News
reached the peak of political moves to meet the current leader Moqtada al – Sadr , head of the National Alliance point on what Ammar al-Hakim water return to normalcy. And perhaps the beginning of the return ofpower to the Shiite House and the strained relationship between thetwo leaders after the demonstrations led by Sadr early last year demanded the selection of cabin cabinet away from Alberlmanah, blocks and was the main sticking point when al- Sadr presented a paper package conditions to return to the coalition Aloutna, include but were not accepted by the parties Shiite.

After a break of more than Aam, continued head of the National Alliance , at the headquarters of the first establishment in Najaf a few days ago received al- Sadr and discussed during the meeting , post Daash, and activate the parliament and the fate of the elections that have been questioning the Liberal block the Sadrist Commission
drew a source considered that ” the meeting which brought together thechest with the head of the National Alliance , Ammar al – Hakim hasfocused on the division of the province of Nineveh after the project Daesh , “asserting that” al- Sadr threatened to take to the streets and organize large demonstrations in the event of passing the partition resolution. ” To the detection of the Sadrist Ayda, source “refused tocall the current leader al – Hakim to resume negotiations in order toreturn to the National Alliance , ” asserting that ” al- Sadr ‘s response to this call conditional on the application of the Shiite alliance fourteen conditions and the announcement at a news conference.” The source noted that ” the Shiite forces expressed reservations on some of theconditions of al- Sadr to change the electoral law and to change theelectoral commission and determine the reference Sistani as a religious authority for the National Alliance,” noting that ” the last condition is met categorically from some of theblocks.” The meeting ended with al – Hakim al- Sadr without a press conference held last used with senior Zairah,, boosting the failure of the parties to solid understandings to normalize the relationship with theShiite parties. On meeting Sadr , head of the Sadrist leadership Alberlman, said that ” the meeting focused on the status of Mosul and post – organization Daash, as well as attempts to divide the province into three provinces.” The parliament voted on a resolution to the protection of the borders of the province of Nineveh

Where he met with al-Sadr in his House Speaker Salim al-Jubouri, who is accused in alliance with Almaliki, and holds responsibility not to hold accountable those responsible Alvasudain, and is the first meeting of its kind after the storming of supporters of the Sadrist movement Council end of April, the House of Representatives in 2016. An official source in the mainstream Alsdra, backstage encounters recent chest Balcol, that “al-Sadr told his guests categorical rejection of the division Ninoy, after the completion of Tharirha, into three provinces,” pointing out that “Sunni forces launched a project division of Nineveh, with the support of some neighboring countries.” The project provides, according to Alsdra, official, who declined to give Hoath, Christian networking components and the province in the plain area Ninoy, also gives the Turkmen and Yazidis right to establish a province in Tal Afar and Snjar, and maintains component of the Sunni province, “Mosul,” which will be in the city center Bassahaliha. The leader of the Sadrist: “Despite the disagreement between Turkey and Iran on many issues in Iraq, but they have agreed to divide Nineveh province into three Mhafezat, one will share the Turkmen component, which has a majority in Tal Afar,” The source considered that “Syria’s position is The other welcome this decision, which is still under discussion and Anakash, because it will provide the final borders and prevent the infiltration of terrorists into its territory. ” He Almsdr, that “the American side of the position of a pro-project division by adopting Republicans and Democrats, members of the US Congress, a draft resolution calling for the establishment of a safe area for religious minorities in the Nineveh Plain.

ERBIL — Kurdistan Regional Government is continuing the efforts to restructure and unite its Peshmerga forces according to a previous plan it had designed, said a Peshmerga official.

Meeting with a British military delegation on Monday, Peshmerga Ministry Secretary-General Jabar Yawar said Prime Minister Nechirvan Barzani and his deputy view this project with importance and they are seriously following up the plan.

He also highlighted the importance of coalition’s military trainings for the Peshmerga forces, saying that building a strong Peshmerga army preserves peace and provides security in the region.

The British delegation, headed by the Defense Senior Adviser for the Middle East at the Ministry of Defense, Thomas Beckett, stressed out the significance of restructuring and uniting all Peshmerga units which is believed to serve the future of the Kurdistan Region.

Panic spreading across Da’ish in #Iraq. Uptick in commanders/families moving to #Syria. IqAF has taken out at least 3 convoys in past 48hrs. 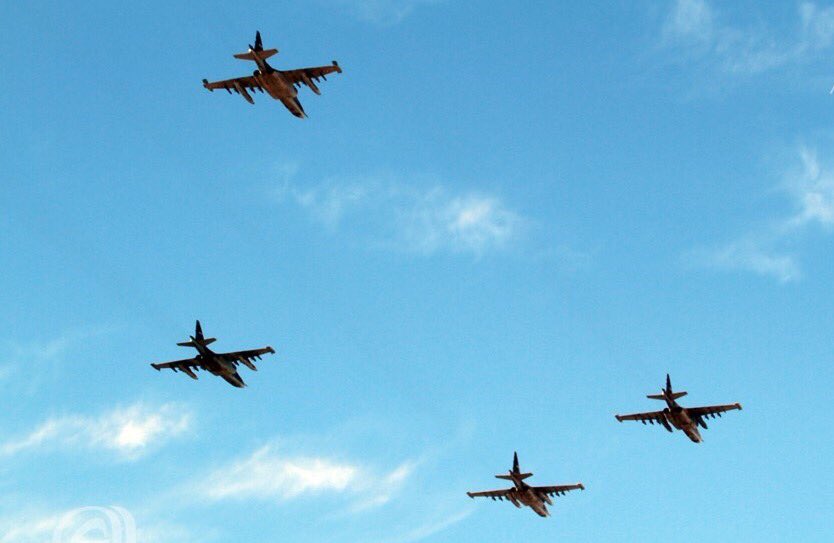 BAGHDAD / The commander of the anti-terrorism forces, Lieutenant General Abdul Ghani al-Asadi, on Monday, the changes described as “strategy” to liberate the remaining remaining on the right side of the city of Mosul. Asadi said in a press statement today: “The security forces Chen Its last arrival in Ayman Mosul. “ He added that “strategic changes in the military plans herald an urgent ending in Mosul.” Al-Asadi did not rule out changing the military positions of the combat units in the final stage of fighting in the city. “The joint security forces are fighting in the remaining neighborhoods on the right side of Mosul, The terrorist groups now exist on only 6% of the occupied territories in Iraq after they controlled 40% of the country after the fall of Mosul in June 2014 with the betrayal of Nuri al-Maliki.

Ebadi, an adviser to Iraq this year gets foreign loans by $ 3 billion

explained the appearance of Mohammed Saleh , adviser to Prime Minister Haider al – Abadi Financial Affairs fact that the 3 billion dollars that could be obtained by Iraq from international funding sources.

And Saleh , according to a statement quoted by the Central Bank of Iraq received by all of Iraq [where] a copy of it, that “on the basis of the general budget of the Federal Act of 2017 , there is a different foreign funding sources expected that Iraq gets under international loans from various donors may reach [three billion USD] this year , both from the World Bank or the IMF or large , including some of the European Union , the countries of the seven industrialized countries group. ”

He stressed that ” the international financial community seems understanding Amaaka and broad support for Iraq passes from the current financial its crisis , a healthy addition to the impressive victories in the war on terror.”

38 minutes ago
Twilight News / interpreted by the Prime Minister for Financial Affairs Advisor to the appearance of Mohammed Saleh on Monday, the fact that $ 3 billion that can be obtained by Iraq from international funding sources.
Saleh explained in a statement, it was reported to Twilight News, that “based on the general budget of the Federal Act of 2017, there is a different external funding sources expected that Iraq gets under international loans from various donors could reach ($ 3 billion) this year, both from the bank international. or the IMF or large, including some of the countries of the European Union Group of seven industrialized countries ”
Saleh stressed that “the international financial community show understanding Amaaka and broad support for Iraq passes from the current financial its crisis and is healthy.”
Keywords: