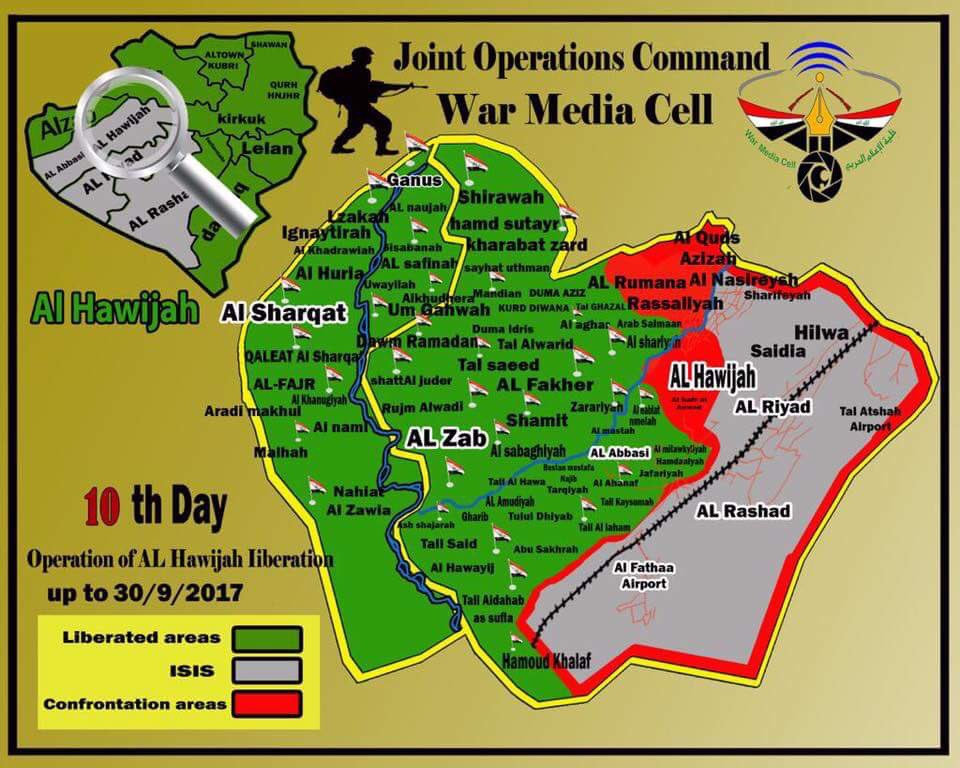 Baghdad – Journal News
“The Kurdish blocs, except the Kurdistan Democratic Party (KDP), will return to Baghdad next Monday,” said a member of the lower house of the Jemaah Islamiyah (JI) group, Ahmed Haji Rashid.
He said in a brief statement on Saturday that “the blocks of the Islamic Group and the Patriotic Union of Kurdistan and change will return to Baghdad next Monday.”
It is noteworthy that the Patriotic Union of Kurdistan announced its presence for the next parliamentary sessions, and the Kurdish blocs announced their boycott of the parliamentary sessions after the adoption of the recent deterrent decisions in response to the Barzani referendum.

(Baghdad: Euphrates News) Federal Police Chief Major Raed Jawdat, the killing of (207) terrorists on the front page of the second phase of the operations of Hawija in Kirkuk.

“The federal police forces and the popular crowd, backed by the air force, have completed the first page of the second stage of the liberation of Hawija,” Jawdat said in a statement.

“It was able to regain control of 344 square kilometers and liberate 28 targets from areas and villages that were under the control of the terrorist gangs and killed 207 people,” he said.

He pointed out that “the destruction of (50) wheel bombs and {20} armed vehicles and provided humanitarian services to the more {220} families besieged.”

9 minutes ago
“The Supreme Council for the referendum in the Kurdistan region will meet on Sunday under the chairmanship of Massoud Barzani, head of the region.
The meeting will be the first meeting of the Council since the referendum on the independence of the Kurdistan Region from Iraq.
The source said in a special statement to the twilight News, “The Supreme Council for the referendum in Kurdistan will meet tomorrow under the supervision of Barzani to change his name.”
The source pointed out that the name of the Council will be changed after the referendum already held last Monday, expected to take this Council in the future decisions on negotiations with Baghdad and relations with neighboring countries and ultimately to independence from Iraq.

AP BAGHDAD (Reuters) – Iraqi forces stationed in Turkey and Iran will work on Saturday to control the land border crossings of Iraq’s Kurdistan region but will not enter the territory, the Associated Press reported on Saturday.
The intelligence official at the border crossing of the Kurdistan region with Turkey, Abdul Wahab Barzani, the agency the presence of Iraqi forces on the Turkish side, explaining that he has information that the Iraqi forces will establish a customs point 15 meters on the Turkish side.
But Barzani said, “They have not contacted us yet.”
The Iraqi Defense Ministry said on Friday that the central government intends to control the border crossings with the region in coordination with Iran and Turkey, in response to the referendum.
“The implementation of the decisions of the central government in the exercise of the federal authorities their constitutional powers to manage all border crossings and airports are conducted as planned in coordination with the relevant authorities and neighboring countries and there is no delay in the proceedings.”
The contents of the statement indicated that the Iraqi forces are planning to move towards the border ports controlled by the territorial government on the Iranian and Turkish sides.
The ban on international flights imposed by Baghdad authorities to and from airports in the Kurdistan region at 6 pm on Friday came into force indefinitely.
The Minister of Transport and Communications in Iraqi Kurdistan Mouloud Murad refused to receive any security elements or officers from Baghdad to oversee the airports of the region.
Source: Associated Press / Reuters

Iraqi forces in the district of Hawija

Iraqi forces in the district of Hawija

The commander of the second elite forces in the Iraqi counter-terrorism, Major General Maan al-Saadi Saturday that the ongoing operations in the northern and southern axis of the province of Hawija in Kirkuk province close to completion.
Al-Saadi said in an interview with “Al-Hurra” that the joint Iraqi forces took control of 26 villages in the west of the judiciary and liberated the Hamrin mountain range.

The second day of the second phase of the Hawijah operations took place on Saturday morning.
The military official said intelligence reports indicated that a number of gunmen had called in Hawija about a thousand people, referring to the killing of 50 fighters of the organization on Friday and the destruction of a number of car bombs and wheels carrying medium weapons and a warehouse of equipment.
Federal Police Chief Major-General Raed Shaker Jawdat said on Saturday that the joint forces had taken over 90 square kilometers of judicial land and liberated the areas adjacent to the mountains of Makhoul as well as 10 kilometers from the town of Hawija.
The commander of the liberation of Hawija, Lieutenant General Abdul Amir Yarallah in a statement raising the Iraqi flag over the buildings liberated villages Saturday, and the continued progress of the joint forces.
Source: Free Website

“The popular crowd, the third brigade and the rapid response, have now reached the outskirts of al-Basal village,” the crowd said in a statement. “The village is 13 km from the center of Hawija district on the western side.”

The joint security forces continue to advance the liberation of the remaining Hawija, amid the break-up of the terrorist organization and the loss of life and equipment.

ERBIL — Kurdish officials are planning to write a document on the outcome of the independence referendum of Kurdistan to be sent to the European Parliament, the United Nations, and US Congress.

The Kurdistan Region’s parties are expected to meet for discussions over writing an official document about the results of the independence vote in order to send it to the European Parliament, UN, and US Congress.

The pact will explain the reasons behind holding a referendum and why the vast majority of the residents of the Kurdish areas outside Kurdistan Region’s administration have backed the secession from Iraq. It will also detail why Kurdistan Region proceeded with the vote despite the large-scale pressures and opposition.

A security source in the Anbar province’s operations command said on Saturday that Abu Hajar, the Saudi military commander of al-Qaim district, was killed in the western province of Anbar and five of his accomplices.

The source said that “the defendants Abu Hajar Saudi al-Daashi, the military official of the province of Qaim, west of Anbar, was killed and five facilities with an armed attack targeted his house in the center of the judiciary.”

“Unidentified gunmen in four-wheeled vehicles stormed the Saudi house and killed him with five of his escorts and then fled to an unknown destination,” the source said.

He added that “the leaders of Dahesh suffer from a bad situation as a result of large differences in the ranks of its fighters.”