The New York Times quoted administration officials as saying sanctions against Iranian Foreign Minister Zarif would be imminent. is over 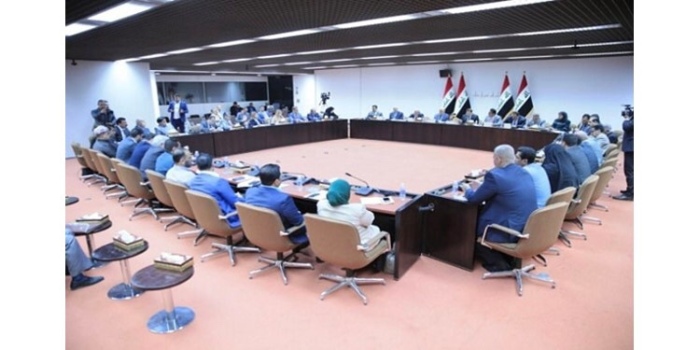 The first deputy speaker of the House of Representatives, Hassan Karim al-Kaabi, said that the Ministry of Finance must be obliged to implement Article 10 of the budget law with regard to the share of the region and the consequent financial obligations to the central government and pay compensation damages.

The obituary publishes the text of the press office statement of the Kaabi:

On the first deputy speaker of the House of Representatives in the House of Representatives Wednesday 31-July 2019 an expanded meeting of the Finance Committee and the Committee on oil and energy in the presence of a number of MPs on parliamentary committees, and Finance Minister Fuad Hussein and Oil Minister Thamer Ghadhban and head of the Office of Financial Supervision and Integrity Agency Salah Nuri, To discuss the oil file of the region and the lack of commitment of the provincial government to implement the provisions of the General Budget 2019.

Al-Kaabi said that the problem of selling oil of the region and the share of the region in the general budget is not new, but the subject of permanent debate in almost every year, specifically during the stage of preparing the budget, noting that today as a parliament agree to find a final legal solution to this file with insistence on the implementation of all parties to the provisions of the Iraqi constitution Which stipulates that oil and other wealth is the property of all Iraqis and no one has the right to go otherwise.

The meeting agreed on the implementation of a number of recommendations, including the obligation of the Ministry of Finance to implement Article 10 of the budget law with regard to the share of the region and the consequent financial obligations to the central government, and calculate the damage rates due to lack of commitment of the provincial government in coordination with the Finance Committee, in addition to the activation and sustainability of the dialogue between The central government and the provincial government to reach understandings and solutions to all problems.

It was also agreed to entrust the Finance, Oil and Energy Committees to receive all the official responses from the Ministries of Oil and Finance and the Office of Financial Control and analysis of inputs and answers to this meeting, and submit the report and recommendations for submission to the House of Representatives to take the appropriate decision, All special accounts, the number of employees and all other belongings in the Kurdistan Region.

First Deputy Speaker of the House of Representatives

(Sulaymaniyah: Euphrates News) The Chairman of the Fatwa Committee in the province of Sulaymaniyah, that on Thursday will witness the determination of the first days of Eid al-Adha.

Irfan Rashid, head of the Fatwa Committee in Sulaymaniyah, said in a press statement that the committee would discuss the first day of Eid al-Adha on Thursday, like all Islamic countries.

He added: The surprise of the month of Dhu al-Hijjah, Thursday, indicating that the tenth of it, may be the first day of Eid al-Adha.

Saudi astronomical calculations were on Sunday, August 11, 2019, the first day of Eid al-Adha

{Economic: Euphrates News} The Central Bank announced Wednesday, granting the administration of the city of political Habbaniyah hundreds of millions for the purpose of re-qualification.

The bank said in a statement received by the agency {Euphrates News} copy of it today that “coinciding with the approaching days of Eid al-Adha, and in order to support the tourism sector and recreational reality in Iraq, the Central Bank of Iraq and through the initiative of Tamkeen funded by private banks and exchange companies and supervised The Association of Private Banks, granted the management of the tourist city in Habbaniyah an amount of 800 million Iraqi dinars, to be spent for the maintenance of the city facilities and completion of preparations for the reception of visitors to the city.

The initiative of community and humanitarian activities (Tamkeen), launched by the Central Bank of Iraq at the end of 2017, aims to support and finance activities and projects of a social, humanitarian, environmental, cultural and artistic nature.

BAGHDAD (AFX) – A member of the parliamentary finance committee MP Haneen Qaddo on Wednesday revealed the questions that were addressed to oil ministers Thamer al-Ghadhban and Finance Fouad Hussein during their hosting of the committee, indicating that the hosting was semi-confidential.

“There are a lot of questions that were asked to host the ministers of finance and oil and the head of the Office of Financial Supervision and Hosting semi-confidential,” he told local media. “It was supposed to be a public meeting before the House of Representatives and public opinion.”

He added that “the main theme of hosting is the violation of the budget law for Article 10 and other topics on the smuggling of Kirkuk oil,” pointing out “the existence of smuggling in the areas of Khazar Majidiyah and Shikhan and Alsia in Mosul through tanks by the Kurdistan Democratic.”

He added that “the hosting and questions addressed to the ministers of the purpose of the obligation of the Kurdistan constitution and the law of the general budget,” explaining that “political agreements do not repeal the laws and if there are political agreements must be translated into laws.”

Qado stressed the need to “apply laws and any breach can not be silent about it and we are concerned with the spirit of the laws,” stressing that “the Minister of Finance violation of the budget law.”

Jordanian Minister of Energy and Mineral Resources Hala Zwati said on Wednesday that the Iraqi side was discussed during the recent visit to import 10 thousand barrels of oil per day.

“The import operation will be from the Kirkuk plant in northern Iraq and will go to the Jordanian oil refinery within two weeks,” Zawati added.

During a press conference during her visit to Mafraq governorate, Hala Zwati said that “Jordan is in the final stages of transporting oil through tanks.”

“The issue of import will be accompanied by the rehabilitation of Baghdad International Road.”

“It is expected to move more goods and products to contribute to the development of the region.”

Oil prices rose nearly 2 percent to a two-week high on optimism that the US Federal Reserve will cut interest rates this week for the first time in more than a decade, boosting demand expectations in the world’s top oil consumer.

US crude inventories are also expected to fall for the seventh straight week.

But at the month level, the crude is still expected to fall due to continued concerns about oil demand, with Brent falling more than 2% and US crude less than 1%.

“Crude oil rose today, partly because of another significant drop in stocks this week as well as the ongoing tensions in the Strait of Hormuz,” said Brian Kissins, portfolio manager at Turtweiss Energy Management. “The prospect of interest rate cuts and US-China trade talks supports the outlook for the economy. ” is over/ 6