BAGHDAD / A member of the House of Representatives Magda Tamimi, on Wednesday, on the topics discussed by the Finance Committee with a number of agents and general managers.

She explained, “The meeting discussed the demands of the political blocs in the budget of 2018 and staff deductions and promotions and allowances and appointments and delete and development.”

Tamimi said that “after the completion of the meeting was held another meeting in the presence of the Prime Minister and the first deputy in the House of Representatives in the presence of the Finance Committee and heads of political blocs as well as deputies representing all provinces,” asserting that “was discussed controversial issues in the budget in preparation for the formulation of formulas satisfactory to all parties To approve the budget. ” Finished

(Baghdad: Al-Furat News) The Ministry of the Interior will hold a press conference on Thursday to present activities that it described as “very important” to the ministry.
A statement issued by the ministry, received by the agency {Euphrates News} a copy of it today, that “the spokesman of the ministry, Major General Saad Maan, will present at the conference, which will be held Thursday at 9 am in the building of the Higher Institute in the ministry activities are very important.
He pointed out that “the entrance from the gate near the stadium of the people and that all facilities are available to attend everyone.”
http://alforatnews.com/modules/news/article.php?storyid=158797

Kuwait’s Deputy Foreign Minister Khalid al-Jarallah said on Wednesday that at least 1,000 companies and businessmen would participate in the Iraq reconstruction conference, which is to be hosted by Kuwait in February.
Al-Jarallah told reporters on the sidelines of a seminar in Kuwait Chamber of Commerce and Industry that the conference will see a very wide participation at the level of businessmen and countries.
Al-Jarallah added that the conference will result in “many projects to be undertaken by the private sector and several projects to be undertaken by governments. These projects will contribute, God willing, to rebuilding what has been destroyed in Iraq. ”
Kuwait has long been hosting the conference, which Iraq hopes will help it rebuild many of the areas devastated by the recent war with the Islamic state.
The head of the Iraqi delegation Mahdi al-Alak told a news conference in Kuwait that the amount needed by his country for reconstruction is not less than 100 billion dollars.
Mehdi said in statements published by Kuwait News Agency (KUNA) earlier this month that the funds needed by Iraq to support the housing sector, which was heavily affected and sectors of oil and telecommunications and basic industries and services, including water and sanitation.
Al-Jarallah said on Wednesday that the first day of the conference, which will be held from February 12 to 14, will be dedicated to civil society organizations. The second day will be entirely for the private sector, while the third day will be devoted to states and their contributions to the reconstruction of Iraq.

The finance minister of the Kurdistan Regional Government (RBI), Rabaz Halaman, said Wednesday that US financial aid to the Peshmerga forces has not come into effect.

The remarks came during a meeting with US Consul General in Arbil, acting Steve Glenn, who today visited the Ministry of Finance and Economy of the Kurdistan Regional Government.

During the meeting, Glenn spoke about US Deputy Secretary of State John Sullivan’s visit to Baghdad and Erbil and stressed that his country believes it is necessary to resolve the outstanding problems between the region and the Iraqi government, especially with regard to salaries, airports and border crossings.

He added that the Iraq reconstruction conference scheduled to be held in Kuwait soon, it is important to participate in a delegation representing the Kurdistan Regional Government.

For his part, Rebaz Hablan talked about the progress and understanding between Arbil and Baghdad, and explained that the ministry provided the audit committees coming from Baghdad with the necessary information in order to expedite as much as possible in the distribution of salaries to employees.

He also called for the continuation of US aid to the forces of Peshmerga Kurdistan, pointing out that the financial aid approved by the United States for the benefit of these forces did not enter into force so far, as he put it.

“In implementation of the orders of the Council of Ministers, a committee was set up to hold meetings with the Kurdistan Regional Government on the border crossing points,” he said at a news conference in Sulaymaniyah. “During the meetings, it was agreed to transfer the official border crossings in the Kurdistan Region to the owners of the General Authority for Border Ports Federal “.

“There are four official border ports in the Kurdistan region, namely Bashmakh, Haj Amran, Prowizkhan and Ibrahim Khalil, in addition to other informal outlets also need official recognition by the federal government.”

“A report has been submitted to the Council of Ministers on the informal border crossings for recognition,” he said.

In turn, said a member of the Commission on the border crossings in the province of Kurdistan Brigadier Salar Abdullah, “a committee of the federal government consisted of representatives of nine federal ministries visited the executors of Kelly and Siranben to see the economic feasibility of opening these two.”

He added that “the work of the Committee has been completed and the final report on these two implementations was submitted to the Presidency of the Federal Council of Ministers to take the appropriate decision on this subject.”

The Director General of Planning in the Ministry of Higher Education and Scientific Research in the Kurdistan region said Wednesday that the audit committees of the Iraqi government will begin its functions as of tomorrow, the audit lists of employees of all ministries of the provincial government.

Najdat Akriy said in an interview with a number of media, including “Khandan”, that the Audit Committee, which came from Baghdad, met on Tuesday with the Council of Ministers of the Kurdistan region, and today continue its meetings with all the ministries of the region.

He added that the committee, which will be divided into three sub-committees will begin its functions from tomorrow, auditing the payrolls of employees of all ministries of the Kurdistan Regional Government.

Iraqi Prime Minister Haider al-Abadi said during his press conference yesterday, “We are still insisting on the salaries of staff of the region and the opening of airports, and committees are still operating in all regions of the region, and there is significant progress.”

“The parliamentary finance committee, the Union of Kurdish Forces and MPs and the provincial deputies of the provinces agreed with Abadi to continue the discussions and will resume discussions tomorrow at 1 pm in the House of Representatives,” Sheikh said for “Iraq News”, noting that “meetings and discussions will be separately” .

He added that “Abadi met with these deputies also separately, and recorded their observations and demands and tomorrow Thursday, will complete dialogues and discussions with them in order to expedite the passage of the budget 2018.” 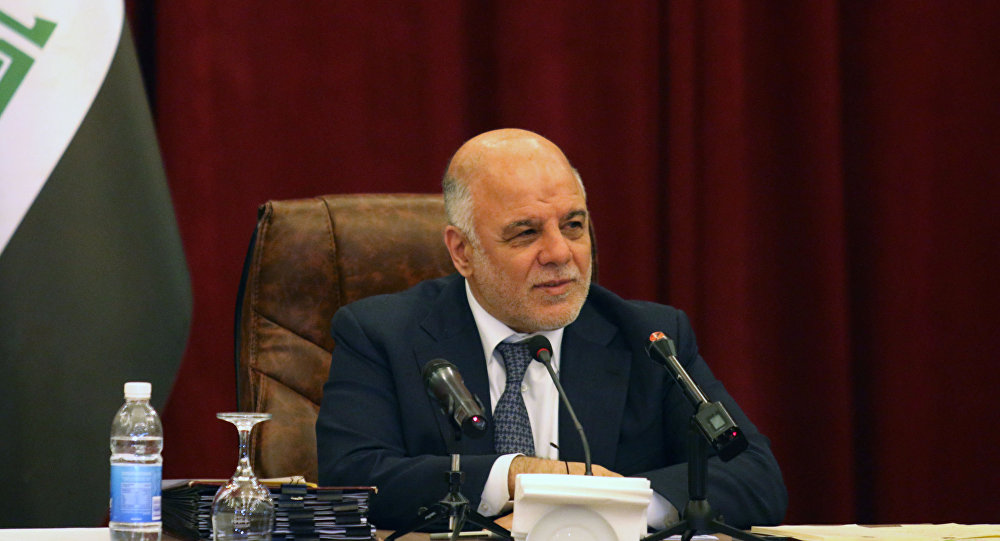 Iraqi Prime Minister Haidar al-Abbadi, attending a parliamentary session devoted to the second reading of the budget of 2018, on Wednesday, that his government has adopted the principle of justice and population ratios on the allocation of share of the Kurdistan region.

Cairo – Sputnik . Abadi said, according to a statement of his media office, after the meeting, the government “has adopted the principle of justice and population ratios on the share of the Kurdistan region in the budget.” 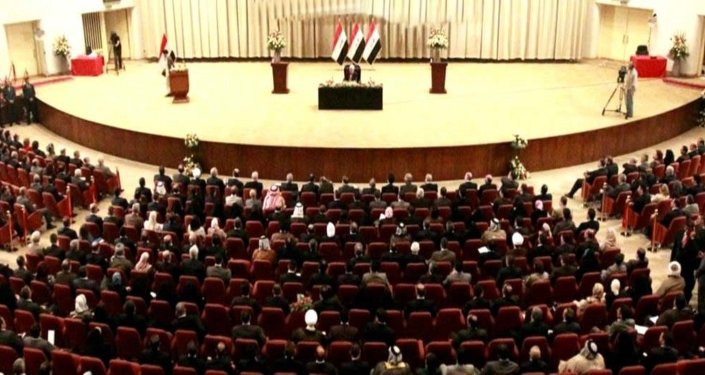 “The government is continuing to voluntarily return the displaced people to their homes and provide services to their areas,” he said, adding that the Electoral Commission for elections “promised to provide voter card for the displaced.”

According to the statement, Abadi said, “We should not allow political differences to affect economic development.” “The government has put all the revenues in the budget, and if the moving parliament wants to discuss this.”

“The government has increased the proportion of the social protection network to more than 60%, despite the financial distress in order to alleviate poverty.”

A source in the media told the agency “Sputnik” that “the session of the parliament, which was held on Wednesday in the presence of Abadi was secret; to discuss the budget of 2018 open,” explaining that “Abadi defended the budget prepared by his government, and explained that it can be discussed all revenue by “He said.

The source added that “the results of discussions held by Abadi today in parliament will be revealed tomorrow,” explaining that “it is expected that Abadi will attend tomorrow’s meeting in parliament as well.”

The source pointed out that “the parliament postponed its meeting to complete discussion of the budget and vote on it until Saturday morning next.”

Abadi held two meetings in parliament today, one with the representatives of the oil-producing provinces, the Finance Committee to resolve the problems related to the financial budget, and the other with the provincial deputies freed from the grip of the terrorist organization “Daash”.

The Iraqi parliament has failed to approve the state budget several times over the past few weeks and was due to adopt it last December.

Is scheduled to meet the Kurdish blocs on Thursday with Prime Minister Haider Abadi to discuss the bill of financial budget for 2018.

Ares Abdullah, head of the Patriotic Union of Kurdistan, said in a press statement that it is scheduled to meet the Kurdish blocs tomorrow to discuss the proposals of the bloc on the bill of financial balance for the year 2018. Adding that the blocks will be transferred to Abadi observation of the share of the region in the financial budget for the current year.

The Kurdish blocs had boycotted the session of the House of Representatives today, which attended by Abadi for the balance.