{Baghdad: Al-Furat News} Iraq welcomed the statements of US President Donald Trump on the recent crisis with Iran.
“The position of Iraq is clear and clear from the current crisis between the United States and the Islamic Republic of Iran, which is calm and the prevention of war in our region,” Foreign Minister Mohammad Ali al-Hakim said in a statement received by the Euphrates News Agency.
“This position is consistent with President Trump’s recent statements about the calm in the region and the lack of intention to wage any war.”
“Iraq is making President Trump’s recent statements important, accurate and a step in the right direction to calm the situation in the region,” he said.
US President Donald Trump said Tuesday during his visit to Japan that the United States does not want to change the Iranian regime, does not want to harm Iran, and welcomed the mediation of Japan.
He said during a press conference with Japanese Prime Minister Shinzo Abe in Tokyo that he believes that Tehran wants to make a new deal, stressing that “Iran was standing before his presidency behind many of the incidents of instability in the Middle East.”
The US president had previously talked about The possibility of talks with Iran, weeks after the escalation and waving of the military option to deal with
The President’s speech after talks in Tokyo with Abe, who is considering – according to media – the possibility of a visit to Tehran
Trump said that he wants to talk to the leaders of Iran if it They have a desire to do so. ”
“Nobody wants to see atrocities happening, especially me.”
http://alforatnews.com/modules/news/article.php?storyid=199547
Advertisement The final statement of the Arab summit stressed the solidarity and solidarity of Arab countries in the face of Iranian interventions, and that Saudi Arabia has every right to defend its territory, in the wake of attacks by a plane march by the Yemeni Houthi group on two pumping stations in Saudi Arabia this month.

The Arab summit condemned “terrorist acts targeting the two oil stations in the Kingdom and vessels in the UAE”, launching rockets from Yemeni territory against Saudi Arabia and condemning Iran’s foreign policy towards Yemen, Bahrain, the United Arab Emirates and Syria.

He called on the Saudi monarch to take a firm stand to stop the Iranian escalation in the region.

King Salman also told the summit that the Palestinian issue “remains our first issue until the Palestinian people get their stolen rights and establish an independent state with East Jerusalem as its capital in accordance with the relevant international resolutions and the Arab peace initiative.”

Iraq announced its opposition to the final communiqué of the Arab emergency summit, pointing out that it did not participate in drafting.

“While Iraq reiterates its denunciation of any action that would target the security of the Kingdom and the security of our brothers in the Gulf, I would like to make it clear that we did not participate in the drafting of the final communiqué and Iraq records its objection to the final statement in its current wording, .

For his part, Egyptian President Abdel Fattah al-Sisi said that the attacks on Saudi Arabia and the UAE an opportunity to reconsider the mechanisms of Arab defense.

“We, as Arabs, also have a responsibility to activate mechanisms of Arab cooperation in combating terrorism and to strengthen our own capabilities to confront them,” he said.

Abbas: We will not participate in Bahrain workshop

For his part, Palestinian President Mahmoud Abbas said that the Palestinians would not participate “in the workshop called by the US administration in Manama.”

“We reject the replacement of the principle of land for peace with prosperity for peace. I would like to reiterate our absolute rejection of American attempts to overthrow international law and international legitimacy with the so-called century deal.”

The head of Iraq, Barham Salih, told the summit that the regional and international crisis with Iran threatens to turn into a comprehensive war if not “improve” its administration and expressed the hope that the security of Iraq will not be targeted. The Iraqi president also called on neighbors and allies to support the stability of his country. 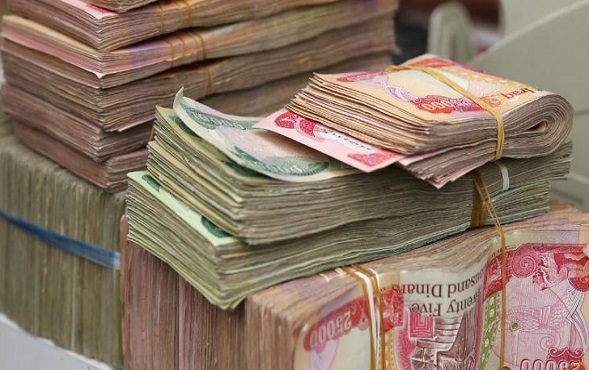 Image of the archive

“The central bank’s duty is to maintain the exchange rate and stability to meet the demand that comes on foreign currency against the dinar,” he said in an interview with the Noa Dialogue program. “The central bank is responsible for the simple sale of the dollar.”

“The Iraqi economy is an import economy and this is not the responsibility of the central bank. It is the duty of the state and the government to fix this structural imbalance and the domestic economy becomes a product for leaving imports,” he said.

He pointed out that “there is a defect in the duty of some institutions, but ordinary people believe that this process should be carried out by the Central Bank, and this is not true,” explaining that “the central bank contact with banks and the government by keeping accounts.”

“The major sin that was committed in 2004 was the abolition of import controls and quality control rules at the border crossings, which made the market full of cheap and cheap imported goods,” he said.

As for the incident of corruption of seven billion in the Rafidain Bank, said Yasiri, “The year 2013 saw heavy rains and leaked water to the bank on the street Rashid, which led to damage that money, which was originally intended to damage, and the duty of the Central Bank to replace those papers, The amount of money less than 200 million dinars. “

On the subject of the deletion of zeros, he said that “this administrative process aimed at tightening the banknotes and improve the accounting record in the country was launched in 2012, but there are some objections at the time and need legislation by the House of Representatives.”

“The Central Bank has suspicions, the first is to prevent one of the internationally recognized companies from conducting an audit and conduct internal control of the bank in exchange for the placement of Iraqi offices, as these companies are global and stamped recognized worldwide and indicates the lack of money laundering “He said.

“The second thing is that controls the joints of the central bank, usually they are accountants and they basically have offices.”

She said that “the independence of the Central Bank and not to the executive power made the government of Nuri al-Maliki dismiss Sinan Shabibi because of his refusal to enter the prime minister to manipulate the reserves of the Central Bank as it represents the stability of the currency and represents the monetary policy in the country and parliament only those who can account and today Parliament is unable to do so.

She stressed that “the status of the head of the Financial Control Bureau governor of the Central Bank is a violation of the constitutional authorities as the regulatory body has become the executive branch.”

“The Finance Committee formed three subcommittees to follow up the work of the Central Bank of the first follow-up the issue of building the Central Bank and the second follow the auction of currency and the third follow the issue of the subsidiary currency and therefore if there is evidence will be submitted to the Integrity Commission or the judiciary.”

He added that “the issue of scrutiny within the Central Bank can be resolved through the House of Representatives and not raise the issue is due to audits by local companies and anyone who has an interest in this issue must submit to the Finance Committee.” US President Donald Trump said Thursday that the United States is doing well in trade talks with China and Beijing wants a deal with Washington.

Trump was speaking to reporters as he left the White House for a speech in Colorado.

The Gulf and Arab summits, which Saudi Arabia has called for in an emergency, are due to kick off in Mecca today, with the 14th summit of the Organization of Islamic Cooperation (OIC) scheduled for Friday.

Foreign Minister Mohammad Ali al-Hakim arrived in Jeddah yesterday to participate in the preparatory foreign ministers’ meeting of the 14th session of the Islamic summit.

The preparatory meeting is to prepare for the fourteenth session of the Islamic Summit, which will be hosted by Mecca on the 31st of this month, as well as the extraordinary Arab summit on the thirtieth of this month (today).

The ministerial meeting is also expected to discuss a number of regional and international issues of concern to Islamic countries and issues of joint Islamic cooperation.

The slogan of the Iraqi Trade Bank «Economy News»

The Iraqi Trade Bank announced the transfer of half of its profits of 106 billion dinars to the State Treasury.

“The external auditor has completed the audit of the financial statements of the bank for the year 2018, where 50% of the net profits of the bank for the year 2018 were transferred to the public treasury of the state equivalent to (106,445,010,000) (one hundred and six) One billion four hundred and fifty-five million and ten thousand Iraqi dinars). ”

“Our bank is working and growing at a steady pace to develop its business and strengthen its work inside and outside the country, which contributes to increasing the financial work it provides and in turn leads to increased profits,” he added.

He pointed out that “from this principle we work hard and firm to strengthen the state treasury on a continuous basis to support the government steps and comply with the directives of Prime Minister Adel Abdul Mahdi, which directed the institutions of the state to work to maximize national production in all sectors and return in turn positive outcome on our beloved country.

(Baghdad: Al-Furat News) The Central Bank of Iraq, expanding its database of exchange rates and gold.

“The Central Bank of Iraq would like to clarify that it has worked to expand the database on exchange rates and gold prices on its website and that this rule includes the daily and monthly rates of the exchange rate of the Iraqi dinar and currencies,” the statement said. Other towards the US dollar and gold prices. ”

The statement pointed to “the possibility of reference to these indicators by all beneficiaries (researchers and scholars as well as government institutions and the role of the judiciary and the courts), without the need to request through paper correspondence, which helps to reduce the burden of correspondence and increase awareness in the use of data electronically.

The statement said that “the Central Bank’s Statistics and Research Department will answer all inquiries regarding exchange rates.”

The talks focused on strengthening the relations between the two countries in various fields, especially in the economy, trade and investment