April 5, 2017 in Construction & Engineering In Iraq, Iraq Banking & Finance News, Iraq Industry & Trade News, Iraq Oil & Gas News, Security
At a major Iraqi business event on Monday, there was a strong sense that Iraq’s fortunes are turning a corner, with the Islamic State group (IS, ISIS, ISIL, Da’esh) on the retreat, andsubstantial export funding newly available for projects in the country.

More than 250 delegates attended the Iraq Britain Business Council (IBBC)‘s Spring Conference in London, with half of those flying in from Iraq.

Amongst detailed discussions on topics such as energy, finance and technology, several soundbites captured the overall mood of the conference:

“Confidence has returned to Baghdad — it is in the air! Baghdad is confident again, and it’s absolutely wonderful.”

“I am confident that Iraq is recovering.”

— Dr Andrew Parmley, Lord Mayor of the City of London.

“Despite … challenges, I do believe that the trajectory for Iraq is upwards … Don’t be shy in suggesting projects.”

The IBBC Spring Conference focused on the rising confidence of Iraq’s private sector, bringing to attention liberated areas open to investment, and discussing new areas for expansion, such as infrastructure and technology.

ERBIL — A high-level delegation from the United States on Tuesday met with Kurdistan Region President Masoud Barzani in Erbil, ensuring the Kurds of continued US supports and stating that Washington is in need of a coordination with Erbil.

According to a press release by Kurdistan Region Presidency, Joseph Dunford, chairman of the Joint Chiefs of Staff, commended Barzani’s role in leading the Peshmerga forces and scoring tremendous victories in the anti-Islamic State (IS) efforts.

In response, Barzani thanked the US administration for standing with Kurds and reiterated that close cooperation between Peshmerga and the US forces resulted in significant victories over terrorists “without targeting even one single civilian location”, according to the press release.

Barzani also highlighted the culture of coexistence in Kurdistan Region and pointed out that this culture has given Kurdistan a privilege to overcome the threat of terrorism.

Following the meeting, Chancellor of Kurdistan Region Security Council, Masrour Barzani described the meeting as “productive”. He posted on his official twitter account that the anti IS efforts and “plans for the day after” were discussed with the US delegation.

A terse, two-sentence statement just issued by @StateDept in name of Secretary Tillerson reacting to the #DPRK launch.

Masrour Barzani, Chancellor of the Kurdistan Region Security Council, described the meeting on Twitter as “productive,” saying they discussed progress in the war against ISIS and “plans for the day after.”

Dunford and Kushner were in Baghdad Monday where they met with Iraqi Prime Minister Haider al-Abadi and were updated on the war against ISIS.

Kushner, on his first trip to Iraq, came on the invitation of Dunford, “to meet with Iraqi leaders, senior US advisors, and visit with US forces in the field to receive an update on the status of the counter-ISIS campaign in Iraq and Syria,” according to a press statement.

Trump’s advisor and son-in-law “is travelling on behalf of the President to express the President’s support and commitment to the Government of Iraq and US personnel currently engaged in the campaign,” the press statement detailed. 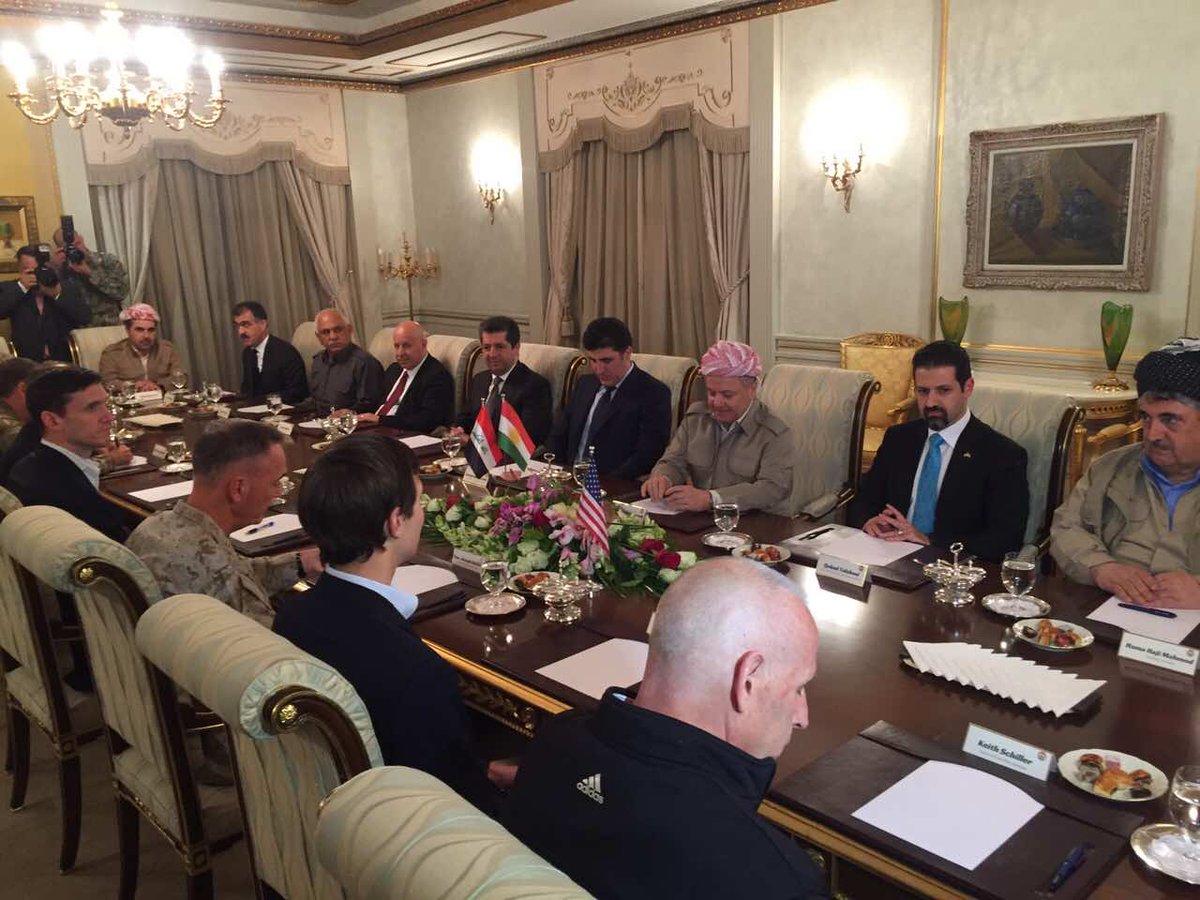 Twilight News / President of the Presidium of the Kurdistan Region of Iraq Fuad Hussein, the British Independent newspaper revealed information about the way in which is believed to be the leader of Abu Bakr al-Baghdadi Daesh fled out of Mosul.

According to the official, the Kurdish Baghdadi “fled Mosul two months ago when he opened the road to the west quickly after a fierce attack” was carried out by militants militant group.

Hussein said in an interview with journalist Patrick Cockburn that “17 Daesh used a car bomb in Mosul and some of its units in Syria to reveal the road that leads to the outside of Mosul.

Hussein said he and other officials believe that the Kurds Daesh what was to implement a process of this kind, but to take out al-Baghdadi safe from the siege.

President of the Presidium of the region and explains that al-Baghdadi smuggling operation carried out after the liberation of the eastern side of Mosul, and before Iraqi forces are currently ongoing launches, which began in the 19th of last month, freeing the western side of the process.

Hussein said Daesh “brought 300 fighters from Syria” for this task.

The newspaper suggests that al-Baghdadi had fled across the road to the west, through the elements of the territory they control the popular crowd before their withdrawal, allowing the organization to complete the smuggling operation.

He adds that the Hussein of Daesh unity, which came from Syria to participate in the output of Baghdadi immediately returned to their place.

The Kurdish official believes that Daesh turns after the liberation of Mosul to the guerrilla style “because I do not think they will stay as a state” and will launch terrorist attacks, but “without the sources they owned” in the past.

Twilight News / The cabinet held its regular meeting on Tuesday , April 4, 2017 , headed by Haider al – Abadi, the search phrase files.
The Council discussed the issue of raising the flag of the Kurdistan region in the province of Kirkuk , where he stressed that “at a time when the united army and police forces and the Peshmerga and popular crowd … the local government of the province of Kirkuk , has taken a unilateral decision to lift the flag of the Kurdistan region in the absence of key components in the province.”
“The Iraqi government stresses the need to respect the constitutional and legal frameworks within the unity of Iraq and that racial, ethnic and national diversity live under the shadow population of the province of Kirkuk.”
The Council said , according to a statement reported to Twilight News, “his commitment to preserve the unity of Iraq and the protection of citizens and coexistence between the components and follow all constitutional and legal means in order to achieve that.”
In the rest of the paragraphs of the agenda the Council of Ministers issued a directive regardless of the amount of 30 billion dinars for agricultural prevention, veterinary and fertilizer that provides an account of the support account for farmers and provide revenue veterinary and prevention departments for the year 2017 it has
also been steering follow – up and project financing breakwater in addition to approving the implementation of the (202) service projects for water services, electricity, sewage , municipal services, health and education in the province of Nineveh , in coordination with the international support Group.
They also discussed the procedures for the provision of electricity for 24 hours a citizen through the collection and ensure full electricity service coverage and the rationalization of consumption , which offset to get the service at a reasonable price and service is guaranteed and that there are those who stand behind the artificial protests for personal purposes.
The Council voted to approve the recommendation of the Committee on Economic Affairs on taxpayers to pay the tax exemption of fines and accrued interest on their debts.
It was also voted to approve the project of trade unions and professional associations law and submit it to the House of Representatives.
The cabinet voted on small loans and approve the recommendation of the Committee on Economic Affairs, containing the approval of the acceptance of the sponsor to ensure that the guarantor of state employees for loans granted by private banks to borrowers of staff.
In the event of the borrower ‘s breach of its obligation to repay the loan guaranteed by the ministry or entity is associated with the Ministry to recover the outstanding loan amount of the employee ‘s sponsor that the employee sponsor provides a written undertaking to the bank creditor to approve the deduction of the amounts of Roatbh when breach of the debtor to pay the debt earned his trust.
It was also committing bank Rafidain and Rasheed promoting micro – credit transactions in accordance with the approved mechanism , in addition to private banks.
The face of the Council of Ministers by the Ministry of Finance for the release of funding allocations earmarked medicines within the Ministry of Health Center in 2017 in the light of the books received from the Ministry of Health a month which , including the share of the Kurdistan Region contained in the draft agenda Quaon the general budget for the year 2017.

[Where – Baghdad]
said the commander of the armed forces Haider al – Abadi on Tuesday that ” the real goal of security forces during the liberation of Mosul battles is the preservation of the lives of civilians, despite attempts by some people do it to block big victories.”
According to Abadi , during a press conference followed the agency all of Iraq [where] that ” the protection of civilians and rid them of the terrorist Daesh made us more determined to eliminate the gangs because giving any chance for terrorists will lead them to kill more civilians , ” pointing out that “large numbers of civilians demanding to expedite in editing , although some want Tojerna and Arqltna since before the start of the process of Mosul , others painted in another way , but we have achieved this success citizens welcome the troops. ”
He noted that “Aldoaash kill civilians who are trying to escape and Ahasrunhm houses , and this happened in the house that surrounded Daesh in which a number of civilians from 100 to 120 citizens in the house of a small area of citizens in that place the destruction said the security forces that Daesh confined people in the place and there is evidence The place where booby – trapping and demonstrates that there is work to ease inside the building which is clear , which led to the killing of so many “.
The Abadi said , “Our goal is to maintain civilians and edit Mosul is the liberation of the citizen and the sacrifices of our troops compared to the sacrifices of civilians shows that wars when they fought in the cities routinely number of civilian casualties is weakening the security forces casualties, but in Iraq has achieved brilliant success in maintaining the civilian and this indicates the size of the sacrifice “.
He pointed out that “there are those who want n mixed leaves and take us back to square the army ended the day and the crowd popular national and includes all Iraqis,” he said . “Enhance our air and received additional aircraft and Kdatna air strengthen days after the last and we have the Army Air and an assessment of the forces on the ground and assess international Alliance leaders said that you have a brave air in Iraq and the army air force who sacrifice themselves in order to protect the troops to help them progress and applaud the engineering effort is important to salute the medical staff effort. ”
http://www.alliraqnews.com/modules/news/article.php?storyid=60397