Reports that many (mainly foreign) Da’ish militants began evacuating alongside their families from #Iraq‘s Rawah towards the #Syria border. 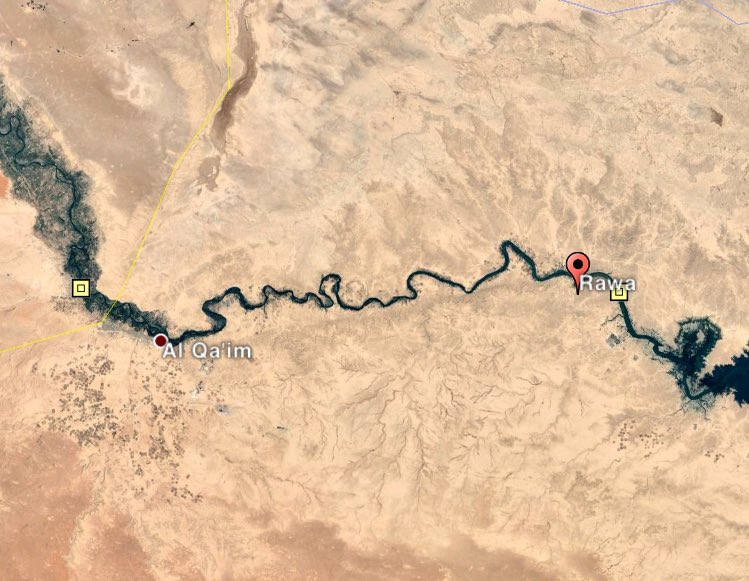 {Baghdad: Euphrates News} said security expert Safa Alaasm, said on Sunday that the end of editing operations right coast from the city of Mosul, “just around the corner.”
He Alaasm, told {Euphrates News}, “We have not left anything and we just around the corner from the right end to the coast of the operations of Nineveh which contains 38 districts.”
He explained, “it left the armed forces only Al – Nouri mosque and a lighthouse B limit, and if it has control of the mosque in the coming days , victory will be ended, as it is considered one of the important collector of light symbols to the media Daesh is the main stronghold of terrorist gangs.”
He noted security expert, that “Daesh site started to boil down movement more, due to reveal their positions on the right coast, where the terrorists more than 32 headquarters was 10 headquarters only leaving a mobile between the house and the other the fact that aviation lookout for them.”
He added that “Daesh used the new plan for adoption by the movement of the headquarters of the leaders.”
And security operations north of Baghdad province, said security expert “We maintain that is fully insured from the north and the south, and these processes limit the operations that take place for a violation of Baghdad,” noting that after the “stop fence Baghdad security we started another plan security to secure Baghdad province” .anthy
http://alforatnews.com/modules/news/article.php?storyid=141458

The army launched a new offensive on the old city after weeks of stalemate in the attempts of the entire Mosul organization restored.

According to the Federal Police, the “weapon favored by Daesh is a motorcycle bomb in the old neighborhoods of the city of Mosul.”

Iraqi forces said in a statement that it succeeded in progress for about two hundred meters so close to the historical Mosque of Al-Nouri, who has symbolic importance as the organization’s leader, Abu Bakr al-Baghdadi announced him what he described as a “Caliphate State”.

The restoration of control of the old neighborhoods of Mosul, proved to be more difficult because of the narrow alleys and streets in these neighborhoods, populated and overcrowded, and the impossibility of deployment of tanks and armored vehicles in these areas, which makes resistance militants to organize Daesh progress in front of the Iraqi forces easy.

There are about 400 thousand people are stuck in the old Mosul, while more than 300 thousand people in the escape successfully since the launch of the military operation to purge the city in October / last October.

Iraqi rapid reaction from the destruction of the headquarters of Daesh in the field at the fifth district of the bridge near the Great Mosque of Al-Nouri and a beacon of humpback in the right side of the city of Mosul and troops managed.

The commander in the fight against terrorism, a Lieutenant-General Abdul-Wahab al-Saadi said that “anti-terrorism forces continue their operations to liberate the rest of the subject areas to occupy Daesh in Tanak neighborhood west of the city of Mosul.

Saadi said in a press statement that the security forces adopt plans and new types of weapons to target insurgents and accurately preserving the lives of civilians.

For his part, said the media spokesman for the rapid reaction forces Media Mustafa Hamid in a press statement “elite units of the rapid reaction forces managed through advance towards the outskirts of the ancient city of Mosul towards the lighthouse of humpback and Al-Nouri mosque targeting and destruction of the headquarters and gatherings of leaders and militants of the organization Daesh specifically in the field district when the fifth bridge near the Republican hospital.

For his part, Council of Nineveh province, on Saturday approached the Iraqi security forces to regain control of the Great Mosque of Al-Nouri in the right coast of the city of Mosul. He said Council member Hussam Alabbar said that “federal police forces and rapid response approached the restoration of a mosque by about Nouri Kamel fled because of Daesh criminal leaders of the mosque,” pointing out that “this place is the headquarters of the start of the alleged caliphate.”

He added Alabbar, ” that “the security forces in connection with the completion of the restoration of a number of old areas,” adding that “Daesh has ended because most of its elements fled, and they can not face our forces in most of the fighting axes.”

The head of the security committee in Anbar province on Sunday announced the date of the battles to clean up the western areas in the province, calling for the strengthening of security forces to hold the border strip between Iraq and Syria.

“The battles to purge the western regions of the terrorist organization, including Al-Qaim, Rawah, Akkas and Akashat, will be launched after the liberation of Mosul with Anbar’s need for additional military forces to clear the Upper Euphrates and catch the border between Iraq and Syria,” Barakat al-Aifan told the Journal News.

“The troops stationed in Anbar now are enough to hold liberated areas in western Anbar and storm the three districts still under the control of the terrorist organization, which requires additional troops and police,” he said.

The terrorist organization has executed eight of its security agents in Mosul.

Security sources confirmed that the Daadash elements carried out the execution of the terrorist Abu Abdul Rahman al-Hayali, head of the security detachments in the right coast of Mosul and seven others, on charges of leaking information to the security forces.

The sources said that the so-called Sharia court of the organization issued a death sentence on charges of treason in front of a group of elements to be an example of those who were considered according to their description.

Baghdad – Journal News
The appearance of Mohammed Saleh, the economic adviser to the Prime Minister, on Sunday, the Japanese loan of the best loans granted to Iraq for being long-term and very few financial benefits.

“Japan is one of the countries that loan Iraq with long-term loans of up to 40 years and an annual interest rate of less than 1 percent with grace periods of up to 10 years. It is aimed at restoring water and electricity services, which is called development loans,” Saleh told the Journal News.

“It is possible to take advantage of these loans in the infrastructure towards the rehabilitation of electricity and roads,” he said, adding that “these loans started since 2004 and so far, but faced some hesitation because of the circumstances of the war in Iraq and the entry of a call and the global financial crisis.”

The Japanese embassy in Baghdad announced on Sunday that its country has provided Iraq with more than 5 billion dollars of the Japanese loan.
Fumio Iwai, Japan’s ambassador to the Republic of Iraq, has provided Japan’s assistance in Iraq to the heads of several committees of the Iraqi parliament, committee members and provincial representatives at the invitation of the Foreign Affairs Committee, the ministry said in a statement.

An Iraqi army commander said his forces penetrated 200 meters into the old city on the western side of the city of Mosul, 400 kilometers (240 miles) north of Baghdad.

Federal police commander Major-General Raed Shaker Jawdat said in a statement that “pieces of the federal police rushed at dawn today (Sunday) a process of wrapping abruptly from the area of the bar of Alban towards the old city and penetrated 200 meters.”

“The enemy is retreating and its elements are defeated by the axis,” he said, pointing out that federal police snipers were stationed on the roofs of buildings and imposed their control over the area around the humpback (the humpback lighthouse) and target the suspicious wheels and armed persons.

Iraqi forces have been battling for weeks with gunbattles on the outskirts of the old city where the group has been holed up and used civilians as human shields, forcing Iraqi forces to delay attacks sometimes to protect the lives of civilians held by the terrorist group.

The old city, which is a vital value for the Iraqi forces, the mosque of the great Nuri, announced by the leader of the extremist organization called Abu Bakr al-Baghdadi, what he called “the state of the Caliphate,” and important historical buildings as a humpback humpback, and ancient markets and heritage and the city is the heart of Mosul and has a special symbol of the sons of Mosul all.

The Iraqi forces began on February 19 the process of restoring the western side of the city of Mosul has so far recovered about 70 percent of its neighborhoods.