[Oan- Baghdad]
announced the Baghdad Operations Command , the martyrdom and wounding nine people , a suicide explosion targeted traffic Rusafa district of Karrada in central Baghdad on Friday evening.
A spokesman for Baghdad operations , Brigadier General Saad Maan in a statement received by all of Iraq [where] a copy of it, ” The death toll is four martyrs of the employees of traffic , including a lieutenant colonel, and five others wounded.”
He explained that ” the terrorist attack was by wheel driven by a suicide bomber who could not enter the cutter, and when the wheel exploded casual entry and yard booking.”
And that ” the explosion resulted in the burning wheels and other traffic was parked civil defense teams extinguished the fire and ambulances evacuated the bodies and we can half of this attitude about theincident as a final.”
http://www.alliraqnews.com/modules/news/article.php?storyid=61259
Advertisement

Arch
BAGHDAD, April 28 (KUNA) – Iraqi forces have continued to make progress in the liberation of new areas in the right-hand coast of the northern city of Mosul, following the liberation today of a number of new districts in the region.
Brigadier Yahia Rasool, spokesman for joint operations in Iraq, said in statements today that the Iraqi forces are continuing the process of liberating the remaining areas of the right coast of Mosul, especially after the liberation of the neighborhood, “Altnk” and the concentration of federal police and rapid reaction forces in the area of ​​Farouk surrounding the mosque Nouri and Hadaba Lighthouse in Old Mosul.
He explained that a number of armored vehicles were on the outskirts of the northern areas of the right side of the Mosul after reaching the areas of Musheirefh and the church grounds .. He stressed that the security forces anchored by air cover by air force air force liberated the urban district completely, after the elements of the organization “Daash” significant loss of life and equipment .
He also pointed to difficulties in the process of liberating the urban district because of the presence of significant numbers of civilians who have opened safe corridors to exit the area and transfer them to safe areas.
On the other hand, a child was killed and three people were wounded by gunfire from an unknown source north of Tikrit in northern Iraq.
Four Iraqi soldiers were also wounded in an armed attack carried out by the “Daash” organization at a checkpoint at al-Waleed junction west of Anbar in western Iraq.

Khandan – commander of the units to protect the Kurdish people said on Friday that US troops will begin to monitor the situation on the Turkish – Syrian border.

He told the Shirvan Kobani ‘Reuters’, the observation has not yet begun , but troops will report to senior US military commanders.

It came Shirvan Kobani ‘s remarks, after meeting with officials from the US military near the Turkish border town Derbassiyeh.

The move comes after the Turkish military to launch air attacks on Tuesday on sites for protection units Kurdish in western Kurdistan.

The United States expressed on the same day, expressed deep concern over the Turkish air strikes, while confirming that Ankara did not get the approval of the international coalition led by Washington.

This is Washington ‘s position in the words of Mark Toner , State Department spokesman said at the time that journalists: “We have expressed those concerns directly to the Government of Turkey.”

Toner said, ” The coalition did not agree to these strikes that led to the unfortunate loss of life among our forces partner in the fight Daesh.”

The Kurdish media close to the Kurdish units, reported that the Turkish army has intensified during the past two days of shelling on villages in western Kurdistan.

[Oan- follow – up]
Army Chief of Staff confirmed the team ‘s first corner Othman Ghanimi, that the security forces will finish editing the right coast of the connector within three weeks maximum, before any solutions next month of Ramadan].
He said Ghanimi in a newspaper interview, said that the security forces were three attacks with chemicals by Daesh in Ayman al- Mosul, “noting that” the international coalition has informed, “he said . ” They have caused cases of rash in the skin were ambulance some cases and taken caution measures in the event of these chemical attacks were repeated. ”
asked about the proportion of the control of Iraqi forces over the old town of Mosul Ghanimi confirmed that it controls 40% of them, stressing that the proportion controlled Daesh inside Ayman al- Mosul , estimated at 35%.
and on the proportion of the influence Daesh areas throughout Iraq confirmed that the total is controlled by Daesh in the whole of Iraq up to the proportion of 3.8% of the total area of the country.
In a question about the whereabouts of Daesh terrorist leader named Abu Bakr al – Baghdadi, confirmed the chief of staff of the army, the intelligence confirms moving on the border between Iraq and Syria continuously.
He denied Ghanimi there is no ground US troops fighting alongside the troops Iraq, stressing that the Iraqi forces are fighting on the ground on their own.
on the quartet of joint coordination between Iraq and Russia, Iran and Syria , the center Ghanimi said that thecenter comes very useful information to identify terrorists sites and objectives are addressed through the four -wheel joint coordination.
Asked about the position of the military leadership of the Turkish raids on Iraqi territory Ghanimi confirmed that the Turkish breach under investigation and there are diplomatic channels opened dialogue with the Turkish side in this regard, stressing that the Iraqi forces are preparing to cut off the road in front of the Turkish side pretexts for breach of Iraqi sovereignty.
With regard to the presence of Turkish troops near Mosul Ghanemi also confirmed that the Iraqi forces will not allow the intervention of these forces in any military operation.
http://www.alliraqnews.com/modules/news/article.php?storyid=61252

A commander of the popular crowd in al-Baghdadi district of Anbar province on Friday announced the “concentration of 80 US troops and 22 wheelloads of various weapons in Haditha dam west of Anbar.”

“US forces of 80 US troops and 22 military vehicles loaded with various weapons have now been stationed in Haditha Dam, west of Anbar, without knowing what they are doing,” Sheikh Qatir al-Samarand told the Journal News.

“The American forces at each headquarters are stationed in it, and then a balloon is mounted on which sophisticated surveillance cameras are installed to monitor the areas surrounding their presence in western areas of Anbar,” he said.

“The headquarters, where the American soldiers stationed near them, headquarters of the commandos of the operations of the island in the dam of Haditha without knowledge of the functions of the work of US forces and what will be implemented later.”

Said Ghanimi in an exclusive interview for “RT”, and seen by / scales News /, “the Iraqi forces were three attacks with chemicals by organizing Daesh in Ayman Mosul,” noting that “the international coalition has learned that.”

He added that it “has caused cases of skin rashes in some cases, an ambulance was taken and caution measures in the event of repeated chemical attacks.”

And on the proportion of the influence of Daesh areas throughout Iraq he indicated Ghanimi, that the total is controlled by Daesh across Iraq, up to 3.8% of the total area of ​​Iraq. ”

Asked about the whereabouts of Abu Bakr al-Baghdadi, leader of the organization Daesh between Ghanimi, that “intelligence confirms moving on the border between Iraq and Syria continuously.”

He denied Ghanimi, “there is no ground US troops fighting alongside Iraqi forces,” adding that “the Iraqi forces are fighting on their own ground.”

Asked about the military leadership’s position on the Turkish raids on Iraqi territory said Ghanimi, that “the Turkish breach under investigation and there are diplomatic channels opened dialogue with the Turkish side in this regard,” asserting that “Iraqi forces are preparing to cut off the road in front of excuses for the Turkish side to violate Iraqi sovereignty.” .

With regard to the presence of Turkish troops near Mosul, he pointed Ghanimi, that “Iraqi forces will not allow the intervention of these forces in any military operation” .anthy 29/9 P 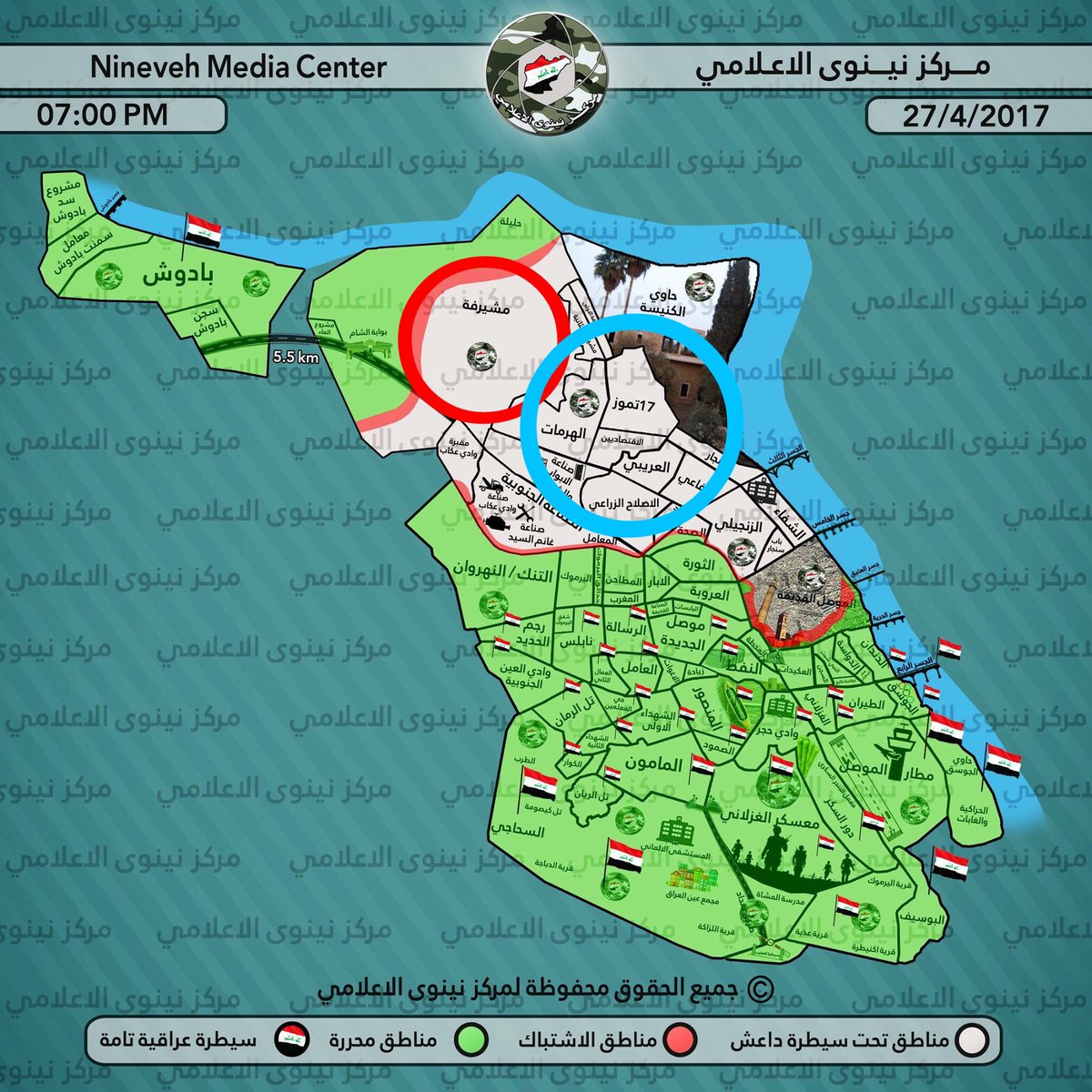 ISTANBUL — Iraqi forces on Thursday recaptured the strategic town of Hatra, with its roads linking the provinces of Nineveh, Salaheddin and Anbar.

Popular Mobilization Forces (PMF), also known as Hashed al-Shaabi recaptured the town from Islamic State (IS) militants. The town is located about 120 kilometers  away from Mosul, but is of importance to the IS for its roads linking multiple provinces, which can be utilized for resupplying its fronts with weapons and fighters.

According to Yarallah, IS militants incurred “heavy losses.” He also noted that Iraqi flags were hoisted above key buildings following the victorious battle over the terrorist group over the town.

An archilogical site in Hatra’s vicinity was recaptured by the PMF on Wednesday. The site has been damaged by IS militants. However, the extent of the damage is as of now uncertain.

Currently, PMF is clearing the western part of town from planted bombs and booby-traps left by the IS. Approximately 5,500 civilians and 16,000 sheep had been evacuated from the area.

Baghdad
, said the secretary general of the Iraqi Front for National Dialogue , Saleh al – Mutlaq ,a US delegation on Friday that Iraq still faces ” the risk of geographical and societal division”, calling for a review of “comprehensive” political situation and focus on thefiles “vital.”

The Office of the President of the Coalition, in a statement received, Alsumaria News, acopy of it, that “al – Mutlaq received today in his office today and the US delegation included the researcher ‘s top foreign policy center Brokinkz Strategic Studies Kenneth Pollack, the vice president of the American Enterprise Center for Political Research Daniella Blateka” .

The bureau said that ” the meeting saw the research topics focused on the future ofIraq ‘s political, security and economic transformations under foreign political views areprevailing and the public in the region.”

He said the office, that “al – Mutlaq expressed great concern about the future of thecountry and the region and called for a comprehensive review of the political situation and focus on the vital files Kalnazhan and rebuild cities and face security problems, corruption, unemployment , and work hard to strike a real settlements contribute to the treatment of social diseases that have swept the country since 2003 to Today”.

The office quoted Mutlaq as saying that “Iraq still faces the risk of geographical and societal division and is in dire need of Aoun ‘s friends and the international community ,” adding that “political acquisition, marginalization and the confiscation of freedoms are still a feature of some powerful actors and that this may lead to speed up community shredding operations and threaten the unity of the country , God forbid. ”

He said al – Mutlaq, said that “civil and state institutions and the integration of security configurations and standardization is the best solution and the right way to avoid post Daesh problems.”

The al – Mutlaq had called earlier, the United Nations and the international community to shoulder its responsibility towards the future of Iraq and the opening of new horizons of understandings in order to stop “violations and marginalization of partners”, while stressing work “for the home” not to be some of the political blocs “captive election fund “.