Twilight News / EBR company dealt with the development of oil and gas discoveries important hydrocarbon products in the world and the countries that dominated the market over the past decades.
And it issued a list of ten countries , which has the largest proven oil reserves , as follows:
1 – Venezuela has the largest proven oil reserves of 300 billion barrels of oil, and in 2011 Venezuela surpassed Saudi Arabia in the list of countries with the largest oil reserves. However, the development of these huge reserves was at the bottom ofgovernment concerns due to political unrest over the past few years. The Venezuela also has huge reserves of oil sands such as those in Canada. Due to the nature of thesticky, it can produce oil from tar sands this through traditional means.
2. Saudi Arabia, with it remained the largest owner reserves for several decades, but it fell Baanaatiadtha 269 billion barrels as at the first of 2016, and an estimated five global conventional reserves. And it sits a large part of its reserves in a small number of giant oil fields, is expected to return to the first place in terms of reserves if it hasstrengthened its activities on the level of exploration.
3. Canada and resolved in the third confirmed Baanaatiadtha amounting to 171 billion barrels, and sits 95% of Canada ‘s oil reserves of conventional oil sands in the province of Alberta, and issued a large part of Canadian oil to the United States.
4. Iran and its reserves of 157.8 billion barrels as the first of January, and is expected tocontinue for a decade as production levels in 2006, Iran has been an erosion ofproduction over the past few decades because of the war with Iraq, and the need for investments among other factors.
5. Iraq, and its reserves of 143 billion barrels, the oil industry has been affected by thewars in Iraq and political instability, and is considered the cities of Basra, Baghdad and Rumaila of the most important sites that embrace of Iraq ‘s oil reserves.
6. Kuwait, holds reserves of 104 billion barrels and embraces the giant Burgan field about 70% of which, as the second – largest oil fields in the world. Despite being asmall country, Kuwait contributes significantly to the world ‘s oil reserves. As thethird largest oil producer among OPEC countries , it accounts for 8% of the world ‘s oil reserves.

7. Emirates, and estimated reserves collected by about 98 billion barrels of which 66 billion barrels in the Zkm field in Abu Dhabi , which accounts for 90% of reserves, followed by Dubai and Sharjah.
8. Russia, amounting to 80 billion barrels of reserves, much of which is located in theplains of Siberia. Production fell after the collapse of the Soviet Union, but rebounded later as a result of the privatization of the energy industry. As the country in its exploration, it is expected to boost its oil reserves in the Arctic and icy water.

9. Libya, and its reserves of 48.3 billion barrels, the largest oil reserves in Africa, exploration efforts have been hit by the war and the sanctions imposed on the international oil companies.

10. Finally, Nigeria, which owns 37 billion barrels of proven reserves, the second in Africa.

Question marks revolve around the position ofPrime Minister Haider al – Abadi of the process of restoring the urban judiciary, which hasbeen edited process lasted only 48 hours.
Valebadi, who used to declare the start ofoperations and the liberalization of cities, televised statements even in the case oftraveling outside the country, remained silent this time.
This comes at a time when encircling the old Mosul operations fell, in the left coast, after the killing of civilians inviolent clashes in the Zndjeli neighborhood.
On the other hand it began Daesh to close the doors of houses in the old city (b columns of iron) to prevent people from escaping. It fired warnings that the organization is preparing for a surprise may be the use ofchemical weapons.
Officials in Mosul talks about a dispute between the Abadi and the crowd, later in the start of the urban battle, about the pieces of participation.
According to the data the battle on the ground, the operation has been launched in isolation from the army, and limited participation on the popular crowd and troops from the clans of Nineveh.
The publication of the popular crowd pictures of his pieces, while touring within the residential neighborhoods of the city, which was under the control of the organization Daesh more than two years. Confirmed intelligence crowd on Thursday that freeing the urban spend was a surprise process confused Daesh.

Abadi silence
was not clear the position of commander of the armed forces of the operation, especially as he held his weekly press conference on the eve of the start of the process. Abadi also delivered a speech at a conference yesterday. On both occasions the Prime Minister did not mention the liberation of one of the strongholds ofDaesh southwest of Nineveh.
The official predicted early in Nineveh to be behind the position of the prime minister, disagreement about thepieces that participated in the editing process.
The official said Moseley, who asked not to be named, (range) yesterday , “was supposed to take part in themilitary operation , but it did not happen.”
The official familiar with the conduct of military operations that ” the popular crowd is the only party that participated in the battles.”
Officials in the province, confirmed the military operation on the morning of the launch, the popular crowd and the band 15 / Army share the raid.
The operation was a sudden and surprise, especially low profile and then was heading to Tal Afar, which governs the crowd around the ring position months ago.
The crowd forces liberated the northern urban parties 4 months ago, and left it then headed north.

The crowd is unique in
turn confirms Ali Ahmadi, Mayor of urban, in connection with (range) yesterday that the “popular crowd with 600 fighters from the crowd clan involved in the liberation of the judiciary.”
He denied local official involvement in the military forces stormed the urban center, despite the participation ofthe army weighted initially.
He participated on the larger forces, and Ashura Brigades, and the League of the Righteous, among pieces of the crowd.
The logistical support directorate in the crowd, on Friday, the forces began the transfer of displaced urban spend to their places of residence liberated.
But Ahmadi says , “did not allow the return of displaced persons to the city, it was agreed to take them to thenearby villages.”
As well as the transfer can not be displaced, who have reached their numbers to 3 thousand families, according to local administrator, to shelter camps because it was full.
He revealed local operations responsible for conducting security checks of the population, noting mistakes in theaudit process, were arrested innocent.
He revealed the local administrator for the arrest of 26 people so far, pointing out that “10 of the detainees have martyrs killed Daesh in the city, including one who has three brothers executed by the organization.”
And it confirms that Alqaimmqam information held by the crowd popular “incomplete” rule, and that a large number of names of militants does not exist in the security lists.

Zndjeli battles
in Gdo, the calm returned back to the front of the right coast, after “Skips tactic” has succeeded in recent days to move the deadlock.
Khalaf said the iron, a member of the Nineveh provincial council (range) yesterday, “There is a stage of thereview of military plans, especially after the killing of civilians in Zndjeli neighborhood battles , ” stressing that ” the process of breaking into the last quarter has now stopped.”
The strategy (Skips) resulted in the liberation of four neighborhoods within days, most recently Tanak neighborhood. Then anti – terrorism forces and federal police to fight side by side, in the neighborhood (Zndjeli), to complete the encirclement of the old city.
Iron added that ” the effects of toxic material injuries suffered by civilians and military in Tanak neighborhood has led to a review of the plans.”
The news agency spoke, two months ago, spotted similar injuries in the left coast, Badush northwest of Mosul, but has not been ascertained.
But the local official says , “There is high possibility that the organization is preparing to use a new weapon in the battle of the old city , ” likely to be the weapon “chemical”.
David , a soldier, a member of the security committee in the Nineveh provincial council, said that the operation is believed to edit the right coast may drag on for extra time.
The soldier, in a statement (term) yesterday, “If the pace of the fighting lasted so slow , we will need another month.”
Siege and thirst
from the other side behind the Iron confirmed that the information obtained confirm that the Daesh began toshut down people ‘s houses drawing on Pmaknat welding of steel and columns, to prevent them from leaving their homes.
The suffering of the population there are humanitarian situations difficult, especially with running out of food and medicine, and the disruption of water for several days, where clashes prevented residents ‘ access to thenearby Tigris River water pumps.
Iron confirms that “water stocks have now run out of the population.”
The number of displaced people now, about half a million people, also suffering from shortages of relief materials.
On the other hand began to organize, according to the local official, to take strict security measures in July neighborhood, north of Mosul. The latter neighborhood, he had conveyed to him the organization
its host.
So far , troops did not reach the neighborhood, prompting Daesh that surrounds the neighborhood high concrete tiles, and Papa puts out and engage with the imposition of tight security. Iron says that “Daesh decided to die , and the people with him.”

BREAKING: Reports that Da’ish launched a gigantic offensive W. of #Mosul but it was repelled by #Iraq‘s Hashd. At least 80 militants killed. 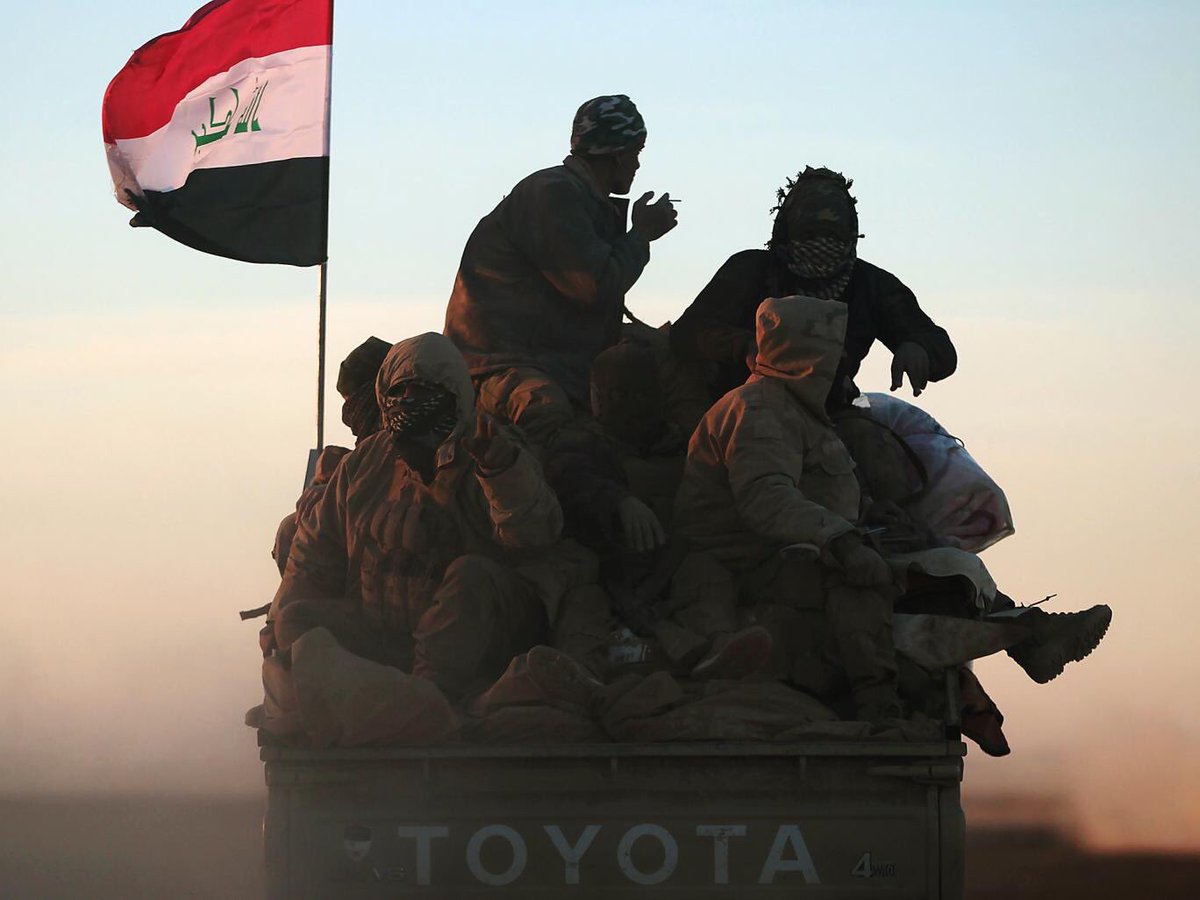 Nineveh – Iraq Press – April 29 / April: 14 killed an element of the federal police, on Saturday, in the area of ​​Mosul, suicide attacks west of the old city, at the time of the joint operations absolved police chief within the same axis, according to security sources.

Said Harith al-Kazim, First Lieutenant in the Federal Police, said that “14 elements of the police were killed and 20 others injured an attack by al-Daesh on his sites in the door of a brick area in central Mosul.”

Kazim said that “since the attack began late Friday night and continued until Saturday morning, during which the organization was able to control the two buildings were trademarks federal police stationed in them.”

And that the organization “used nearly six suicide bombers with explosive belts infiltrated into the area.”

According to the officer, the federal police “managed to restore the buildings after the aerial bombardment of Iraqi Airways, in which 17 elements of Daesh killed.”

For his part, said Colonel Ahmed al-Jubouri that “joint operations issued an order to exempt Major General Ali al-Lami, the commander of the fifth division of the Federal Police against the backdrop of security breaches that occurred within interrupted in western Mosul, the old Mosul.”

Iraqi forces managed during a military campaign launched in October / October 2016 from the restoration of the eastern half of the connector, and then began on February 19 / February offensive to retake the western part of the city. Q ended 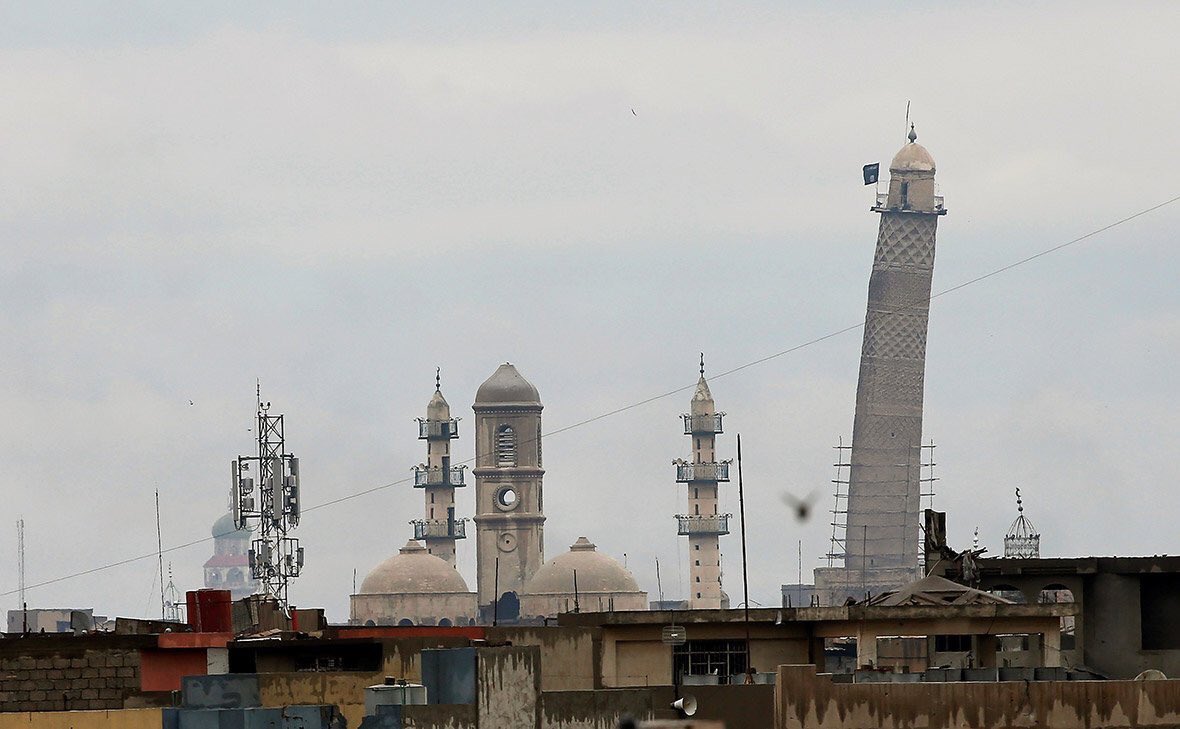 Like Loading...
History of edits:: 2017/4/29 22:35 • 31 times readable
[Where – Baghdad]
said the international coalition, said Saturday that a soldier was killed by soldiers near the city of Mosul , theNineveh province.
The military alliance said the US – led US soldier died of his wounds after a roadside bomb exploded outside the northern Iraqi city of Mosul on Saturday.
The statement issued by the steel determination process did not give any other details.
http://www.alliraqnews.com/modules/news/article.php?storyid=61296