The adviser of the Political Bureau of the Kurdistan Democratic Party (led by President of the Kurdistan Region Massoud Barzani) that the head of the Iraqi back Haider Abadi carried the Kurdish delegation that visited Baghdad recently a proposal on the referendum and raising the flag of Kurdistan in Kirkuk, to deliver to President Barzani, without revealing the nature of what this includes The proposal, pointing to a meeting between President Barzani and Abadi on it.

Arif Rushdi told Basnews about Abadi’s proposal, “It is a message. If necessary, there will be a meeting between President Barzani and Abadi.”

The secretary of the Kurdistan Democratic Party and a member of the Kurdish delegation who visited Baghdad for two days, Fadel Mirani, revealed a proposal from Iraqi Prime Minister Haider Abadi on differences with Kurdistan, describing the meeting with the latter very positive.

Mirani said last Thursday, that Abadi made a positive proposal to the Kurdish delegation during their meeting without revealing the content. Pointing to the need to consult the President of the Kurdistan Region and political parties and the Council of Kirkuk province before it.

This is scheduled to hold a high-level meeting on Tuesday between the Kurdistan Democratic Party and the Patriotic Union of Kurdistan.

“The question of the referendum was clearly discussed with Iraqi officials and will be organized this year,” Arif Rushdi told Basnews.

{Baghdad} Euphrates News said the leader of the Union of Forces, former House of Representatives Speaker Mahmoud al-Mashhadani, on Monday that “the inevitability of national settlement and is not an option.”
He said al – Mashhadani , during a press interview with Al – Furat satellite, that ” thesettlement project to build the State of Iraq for the post Daesh, not a national reconciliation, which is inevitable and is not an option , ” he said, adding that “what ispresented so far is a visions of the parties and not settle.”
He added, “we Nlgueta with the National Alliance by 90% , ” noting that ” the vision of the Sunni and Shia settlement {} have agreed that the two parties looking for anational state and we are still waiting for the Kurdish paper.”
He pointed out that “there are those who believe that the application of theConstitution sings for the settlement,” explaining that ” the features of the Sunni paper includes the promotion and strengthening of state institutions , a national civil state as well as crises reset.”
He saw al – Mashhadani, the need to “deal with the de – Baathification file a judicial rather than political,” pointing out that the paper settlement presented by the Forces Union, including “stop executions because many verdicts are not based on sound foundations so will stop the executions for retrial, Eradicating active today and should be given the field to review the issues. ”
And the popular crowd, and asked to resolve, according to the paper Forces Union, explained that ” the crowd popular heroes, but their survival institution without restriction or condition leads to a multiplicity of security agencies, and tired of thesecurity establishment, so we are with the protection of their rights in accordance with the legal cover for them and specifications required by joining the The defense and interior ministries. ”
The head of the National Alliance , Mr. Ammar al – Hakim, said on March 20 that “some of the objectors to the national settlement of victims of which they are living on the speech convulsive”, as head of the alliance said yesterday that ” the national settlement project was adopted by the National Alliance of all his strength , a vision for the future of Iraq after Daesh stage, to build a state of citizenship of all the Iraqi people reassure components and provide services to them , “he said, adding that the national settlement project” past at a steady pace “.anthy
http://alforatnews.com/modules/news/article.php?storyid=141199

The United States has played a leading role in fighting the Islamic State, but now it must prepare for the fights that will take place at negotiating tables and reconciliation conferences. Iraqis recognize that the coming months will be difficult. In a recent visit to Iraq, our interlocutors from various political stripes emphasized the enormity of the challenges facing the country after the expected expulsion of the Islamic State from Mosul. If we are not to make the same mistake of winning the war and again losing the peace, the Trump administration should look beyond the focus on the current battle and develop a layered and sustainable strategy to help Iraq move toward stability. While this strategy will include military and aid components, it will need to have a strong political and diplomatic component. War, including civil war, is the continuation of politics by other means. If Iraq does not get its politics in order, the country’s political struggles will continue to play out in other violent ways that Iraqis have come to know too well, and the specter of more sectarian conflict, radicalization, and terrorism will persist.

First, to be sure, a defeat of the Islamic State in Mosul will not be the end of the kinetic battle against the terrorist organization in Iraq. Though 70 percent of Mosul has been liberated, there are still an estimated 400,000 people behind Islamic State lines in the city. A fair number of these are families of Islamic State fighters who came to Mosul from Diyala, Anbar, and Tikrit. While Iraqi forces have retaken major cities, Islamic State fighters are still entrenched in about 40 percent of Kirkuk province, including the districts of Hawija, Riyadh, and Rashad, which lie on the western side of the province. They also control Tal Afar, parts of Sinjar province, and in Anbar they hold the cities ofAna, Rawa, and Qaim, all close to the border with Syria. Even if defeated there, they could head for the less accessible hills and deserts of Diyala and Anbar provinces, and as long as they also have havens across the border in Syria—most prominently in Raqqa and Deir Ezzor—they can always return. Still, their defeat in Mosul will mean the end of their experiment in religious rule in Iraq and a great blow to their prestige and appeal.

The ongoing kinetic threats justify maintaining a medium-term U.S. military presence around current troop levels of 5,000-6,000 personnel to maintain support, training, and cooperation with the Iraqi armed forces. This is what the Iraqi government has requested, and the United States should provide this assistance. Indeed, President Trump has himself said “we shouldn’t have gone in; but certainly we shouldn’t have left.”

CAIRO – The Egyptian minister of oil has agreed to import one million barrels of crude oil a month from Iraq, the minister said.

Tariq al-Mulla told reporters after the cabinet meeting that the final signing of the agreement would take place within days.

Mullah expected the first shipment of Iraqi oil to arrive in May.

On the dues of the foreign partners, the minister said that part of the loan may be directed to the African Development Bank and the World Bank to pay part of the dues, which amounted to 3.5 billion dollars.

Oil Ministry sources said the government plans to pay 500 million dollars of the dues of foreign companies operating in the oil sector during the next month.

The British embassy in Cairo, in a statement issued last November, that among the terms of the International Monetary Fund before agreeing to lend Egypt $ 12 billion commitment to pay the dues of foreign oil companies.

Egypt received a package of funding from international institutions during the past months, led by the InternationalMonetary Fund , the World Bank and African development.

Mosul (IraqiNews.com) A police officer announced, on Monday, that elite leaders of the Islamic State group have fled Tal Afar District, while the group executed seven of its local leaders for fleeing battles, west of Mosul.

Many members of the Islamic State group started to flee different areas of the city of Mosul, due to the fierce battles launched by Iraqi security forces to recapture the city, after the announcement of Prime Minister Haider al-Abadi to start an offensive, in 19 February 2017, to retake the western side of Mosul. 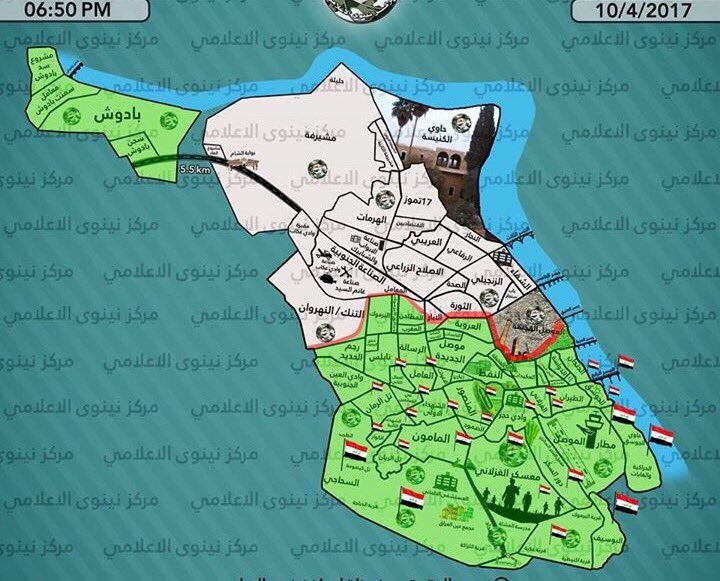 A few days ago, Prime Minister Haider Abadi stressed that the country is out of Chapter VII within two months, after he met all the international sanctions imposed on him during the rule of the former regime, which caused internal crises culminated in placing the country under this international chapter.

What is this chapter, and what did it do with the lives of the Iraqis?

UN Security Council A few years ago, a unanimous vote was taken on Resolution 2107, which partially exempts Iraq from the provisions of Chapter VII of the United Nations Charter and terminates the mission of the UN Special Coordinator in charge of the missing persons and Kuwaiti property.

This chapter, and all the obligations that accompany it, was the result of Iraq and the Iraqis because of the invasion of the former regime of Kuwait in 1990, in what is known as the invasion of Kuwait or the Second Gulf War.

Chapter VII of the Charter of the United Nations provides for intervention in situations of threat of peace and aggression, whereby the Security Council can take non-military measures or resort to force to maintain international peace and security in the event of failure of the parties to the conflict to resolve their differences.

Baghdad has been under the seventh item since 1990, and since that time and Iraq under the weight of economic sanctions did not end until after 2003, while Iraqi officials confirm today that Baghdad has fulfilled all its obligations and has left only to end the file of compensation with Kuwait, Of Chapter VII.

The famous resolution 661, adopted unanimously by the Security Council in 1990, contained several articles relating to the imposition of punitive decisions that ended with the use of the provisions of Chapter VII and the provisions of the binding application of Article 39 to Article 51.

Articles 41, 42 and 43 of that resolution imposed severe sanctions on Iraq. Article 41 called on UN member states to stop all economic ties and communications with Iraq and to cut off all diplomatic relations with the former regime.

Article 42 also addressed the issue of the military solution when it stated that, should the Security Council consider that the measures provided for in article 41 were inadequate, the Council was entitled to take the necessary measures to maintain or restore international peace and security.

Today, Iraq is just around the corner from Chapter VII. With the completion of this step, Baghdad will recover frozen funds in the foreign banks estimated at nearly $ 50 billion, as well as those in the Development Fund for Iraq, and will return to its place in the international arena, amid direct cooperation And effective from all the members of the Security Council and at all levels, in addition to raising the opportunities for investment of major companies and the consolidation of its role in the region and the world … And most importantly liberate Iraq from the planks of the major powers!