{Baghdad: Euphrates News} Foreign Minister Ibrahim al-Jaafari, on Sunday, on the necessity of activating the strategic framework signed between Baghdad and Washington agreement.
According to a Foreign Ministry statement, received by the agency {Euphrates News}, a copy of it, that Jaafari “received the special envoy of US President Donald Trump, the international coalition to fight Daesh Brett Macgork, and his accompanying delegation in his office in Baghdad . During the meeting , theyreviewed the overall security developments, political, the great victories achieved by the Iraqis in their war against terrorist gangs Daesh, and international efforts to support the security and stability of the region. ”
The statement, al – Jaafari said that “all Iraqis have united to defend the sovereignty of Iraq, and the elimination of terrorism , ” stressing ” the need for concerted international efforts, and contribute to the reconstruction of infrastructure after theelimination of terrorism, and the adoption of similar to the Marshall Plan project ,which contributed to the construction of Germany after the second World war. ”
He pointed to ” the importance of activating the strategic framework agreement signed between Baghdad and Washington; because of its significant impact on theopening areas of joint cooperation between the two countries , ” adding that “Iraq issticking to bilateral relations with the world all countries, and countries , especially neighboring; based on the exchange of common interests, and face common dangers, and non – interference in internal affairs. ”
For his part, the special envoy of US President Donald Trump, the international coalition to fight Daesh, on ” the continued support of Iraq even eliminate Daesh terrorist gangs”, praising ” the efforts made by the Iraqi efforts in the war against terrorism, diplomatic and openness witnessed by the Iraqi relations with various countries of the world “.is over
http://alforatnews.com/modules/news/article.php?storyid=141738 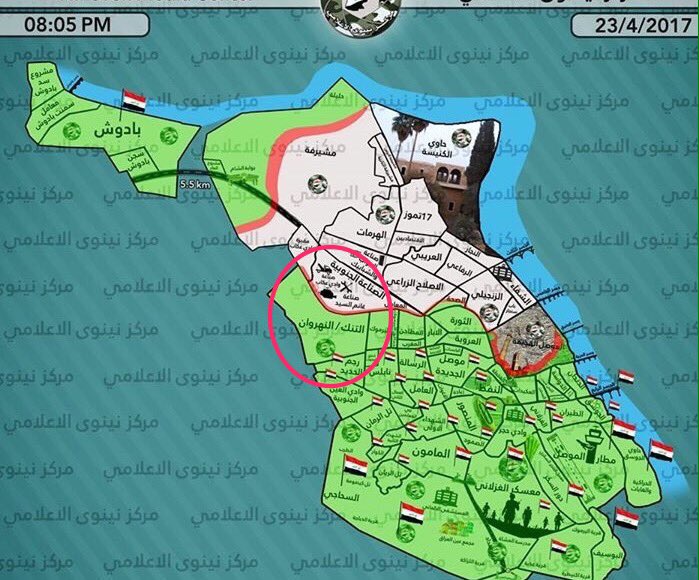 BAGHDAD – Iraq Press – April 23: Baghdad Operations Command announced Sunday, thesuccess of the special visit of Imam al – Kadhim security plan (p), and open most of the roads that were closed in the capital , except for thesurrounding Kazemiya roads that will open in thenext few hours.         He continued Lt. Gen. Jalil al -Rubaie, said that ” the visit was successfully completed and there is no security breach which,” noting that “all setups operations and one team and we have achieved good results on the ground , ” stressing that ” has been opened most of the roads except the surrounding Kazemiya that will open upin a few hours next “.anthy O.h

Twilight News / Syria ‘s democratic forces, backed by the international coalition aircraft revealed, they received intelligence that the organization Daesh, after cracking down on it and besieged in the tenderness of the three sides, began in theliquidation of a large number of its leaders, due to the collapse of the morale of theelements of the organization and the lack of confidence among them.
According to intelligence sources that local fighters are now do not trust foreigners or what are known as “immigrants” who have joined the organization and accuse them for spying for the International Alliance of Democratic Forces of Syria , which came close to a stronghold of “Daesh” and took control of all roads leading to tenderness.
These developments also suggest that the organization is on the verge of defeat, especially after the “democratic Syria” announcement that it has succeeded in isolating tenderness and preparing to storm it before heading to the city of Deir al -Zour, the point of elements and leaders of the “Daesh”.

Search Defense Minister Irfan Mahmood Hayali with the US ambassador in Baghdad , Douglas Selman support of the international coalition to Iraqi forces and the conduct of operations to edit the right side of the city of Mosul.

According to a Defense Ministry statement received by all of Iraq [where] a copy of it today that “Defense Minister Irfan Mahmoud Hayali, received in his office on Sunday morning, the US ambassador in Baghdad , Douglas Selman and his accompanying delegation, the meeting discussed the course of the ongoing liberalization right coast military operations Mosul city. ”

He added , “During the meeting , emphasizing the support and support by the international coalition of the Iraqi Armed Forces troops, and paying tribute to the humanitarian deal with the citizens by the Iraqi forces.” The head of the anti-terrorism unit, Lieutenant-General Abdul Ghani al-Asadi, said that the remaining neighborhoods in the hands of the terrorist organization within the responsibility of the device in the right-hand side of the city of Mosul, are only five of the 41 districts, stressing that the forces of the device ended the cleansing of 36 of those neighborhoods.

Al-Asadi revealed the continuation of the western line in the fight against terrorism, currently progressing in the district of Al-Tanak, noting that the neighborhood left only a few parts to liberate it from the terrorists.

He pointed to the return of normal life to the second health and revolution after their liberation recently, referring to the arrival of relief aid to the neighborhood.

The anti-terror forces liberated the second health district on the right side of the city of Mosul.

A security source said Sunday, the reopening of the road towards the Mahmudiyah Alwa Rasheed and raising the barriers towards the junction session fast Baya.

He added that the “forces lifted the concrete barriers from the junction towards a quick session down to Baya mosque by drums or passing through the square eagles and Harthiya and the Baghdad International Fair.”

The source pointed out, to “open Suleikh bridge” Line One “, the next hours will be Salk Alseidan,” persisting “has also been lifted concrete barriers from the distant streets from the city of Kadhimiya and the continued closure with barbed wire next hours will increase gradually.”

And between that “forces also opened Ahalchip Street and the intersection pratha Mosque Haifa Street, and the bridges of Adhamiya and Sarrafia.”

He pointed out, “by opening the door towards the holy Shorja and Sinak Street Sadoun Square Paradise Square Kahramana National Theater and Karada inside Camp Rashid and saffron.”

He explained that “the closure of Kadhimiya in the city and its neighboring areas, remains constant to further notice.”

It is noteworthy that the security forces closed the main roads leading to the holy city of Kadhimiya (north of Baghdad), the influx of visitors to the shrine of Imam Musa al-Kadhim, “p” to commemorate A_i_hadh.anthy 29 / A 43