The Independent / – US Rep. Steve Womack, Saturday, warned the International Monetary Fund not to grant a loan to Iran.

“The Iranian regime will use the loan for its rogue agenda and destabilization, and not to help the people who are against it,” he said in a tweet posted on Twitter.

“The Biden administration – and the International Monetary Fund – should reject any funding that supports this state sponsor of terrorism,” he added.

{Baghdad: Al Furat News} The Speaker of Parliament, Muhammad al-Halbousi, announced, on Saturday, the removal of the tax clause on the salaries of employees and retirees in the federal budget for 2021.

And his media office quoted in a statement, Al-Furat News received a copy of it, from Al-Halbousi saying, “The Parliamentary Finance Committee has made a decision not to deduct the salaries of employees, and that no deduction will take place.” Retired and not prejudiced. ”

Al-Halbousi revealed “the inclusion of those with special and higher grades, with salary deductions that have been approved within the Finance Committee, while the rest of the employees do not have any deductions for their salaries.”

The Speaker of Parliament added, “The tax clause on employee salaries has been addressed by the Finance Committee, and the employee will receive his salary as it was before the budget law was enacted.” 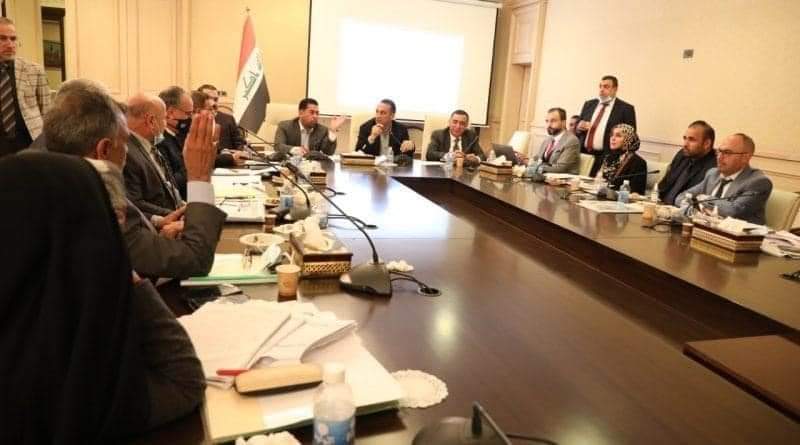 Shafaq News / A parliamentary source said, on Saturday, that a meeting will bring together members of the Finance Committee with Prime Minister Mustafa Al-Kazemi to discuss the 2021 budget.

A source in the Finance Committee informed Shafaq News Agency; That the committee will meet within the next 24 hours the Prime Minister and a number of ministers and officials in the state to discuss the latest draft of the General Budget Law.

Source added; “The Finance Committee will meet after a meeting with Al-Kazemi and his government staff, heads of political blocs to discuss the latest draft of the budget law before presenting the budget law to a vote in the parliament session.”

Earlier on Saturday, the President of the Iraqi Council of Representatives announced the cancellation of the deductions that the government included in the 2021 budget. 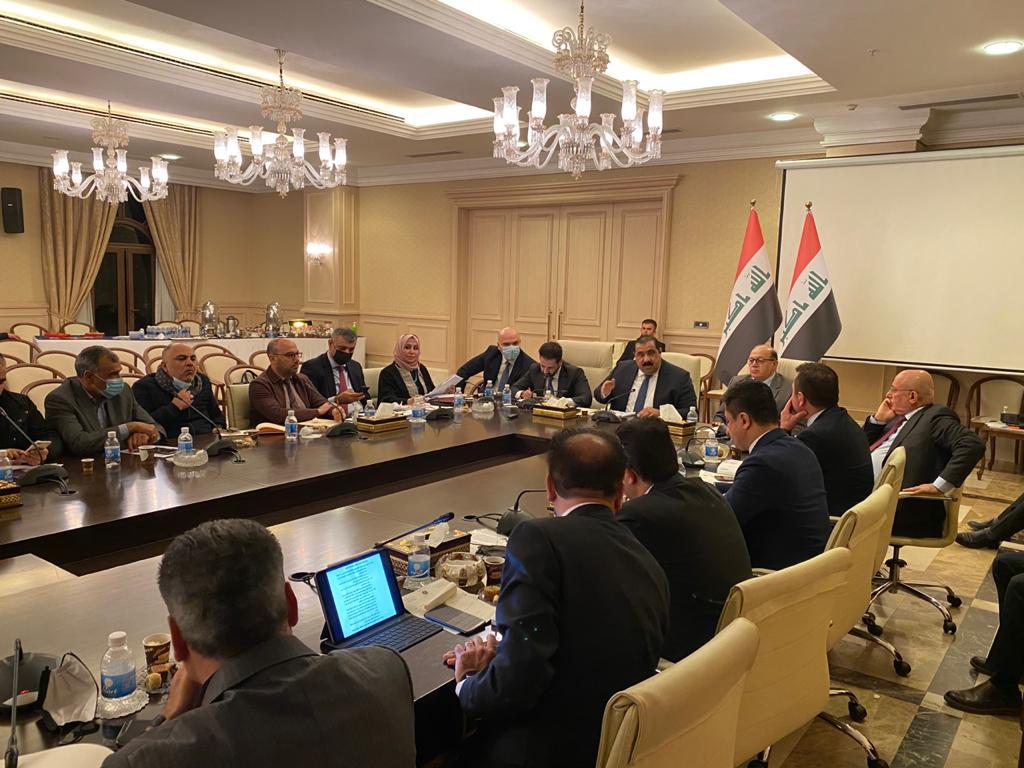 Shafaq News / A source in the Parliamentary Finance Committee revealed, on Saturday, that continuous meetings will be held within the next 48 hours to resolve disputes regarding the Kurdistan Region’s share in the federal financial budget for the current year.

The source told Shafaq News, “The Finance Committee will hold continuous meetings with the heads of political blocs within the next 48 hours to settle the region’s share in the budget, including oil revenues, border crossings and airports in Kurdistan.”

He added that the meetings will also decide the number of barrels of oil that the region must deliver to the federal government, whether it is 250 or 450 thousand barrels per day.

The governments of Baghdad and Erbil reached an agreement to hand over the region’s revenues of 250 thousand barrels per day and half of the other revenues from border crossings and others, in exchange for a share estimated at 12.6 percent of the budget in addition to the payment of the salaries of the Peshmerga forces.

The agreement was included in the draft budget approved by the Iraqi government and sent to Parliament for approval, except for the Shiite political blocs that raised the ceiling of their demands and demanded that the region hand over the revenues of 500 thousand barrels per day of oil to the federal government, in exchange for the region receiving its full share of the budget without any shortage.

A member of the Finance Committee, Sadiq Madloul, expected, on Saturday, February 06, 2021, to vote on the budget next week, while indicating that a meeting would be held in the presence of Prime Minister Mustafa Al-Kazemi before submitting it to the vote.

“The Finance Committee has agreed to cancel deductions from employees ‘salaries and not to go towards income tax, and no deductions will be imposed on employees’ salaries, especially in light of the conditions the country is going through with the high exchange rate of the dollar,” Mdloul said in a televised interview. .

He added that “the Finance Committee hosted more than 280 government figures to study the budget, and work is still continuing in this regard.”

Mudloul indicated that “the share of the Kurdistan region in the budget is from the remaining points that have not been decided until now,” noting that “previous governments were favorable to the region and there must be firm solutions that bind the parties to the budget points.”

And on the sums allocated for investment and expenditures, Mudloul said, “The Finance Committee has doubled the amount allocated to the investment plan from 2 trillion dinars to 4 trillion, while it reduced a lot of expenditures.”

Earlier, a member of the Al-Fateh Alliance, MP Muhammad Al-Baldawi, confirmed, on Saturday, February 06, 2021, the possibility of resorting to a majority vote on the 2021 Budget Law, in case the problems regarding it with the Kurdish delegation were not resolved.

Al-Baldawi said in an interview with (Baghdad Today), “The Kurds are committed to giving Baghdad 250 thousand barrels per day, and this is contrary to what was stipulated in the borrowing law, which is the delivery of all oil exported from the region to the SOMO company, as well as Kurdistan’s refusal of the numbers confirmed for its employees in the Ministry of Finance. Not to mention the file of financial returns, as these three problems are controlling the situation. ”

He added that “building the budget and entitlements should be far from political courtesies, and the distribution of wealth equally to all Iraqi provinces.”

And that “the draft budget law may be delayed in resolving all its points by a week or 10 days in the event that the problems with the Kurdistan region are resolved,” indicating that “the choice of voting by the majority will proceed according to what guarantees justice and fairness between all Iraqi components and provinces.”

The Patriotic Union of Kurdistan confirmed, on Saturday, that the Kurdish delegation will return to Baghdad next week to resume negotiations on the budget, and while expressing regret that the percentage of the Kurdistan region has not been decided within the federal budget, it called for not to use the differences as electoral propaganda at the expense of the Kurdish people.

“The Kurdish government delegation will return to Baghdad next week to find solutions with the budget and resume negotiations,” the union’s leader, Ghayath Al-Surji, said in a televised interview.

He added, “It is not possible to exploit the economic situation in Kurdistan to achieve electoral political interests in Baghdad and to insist on passing the budget in this case.”

“We hope that the differences between a Kurdish party and Baghdad will not be reflected on the fate and interests of the Kurdish people, especially since there are also political parties that represent the people in the region,” he added.

Al-Surji accused “some political figures in Baghdad of exploiting the budget crisis and using it as a rich advertising material before the elections,” calling on everyone to “solve matters in a good and fraternal manner.” Ended 29 / h

On Saturday, a Kurdish political source revealed that the American side had entered the mediation line between Baghdad and Erbil, with the aim of reaching an agreement on the budget.

The source told Al-Maaloumah Agency: “After the regional government’s inability to reach an agreement on fixing the region’s share of the budget, in light of the insistence of a group of political forces to hand over Kurdistan all its oil and financial revenues, the regional government has joined the United States of America in the mediation line.”

He added that “the President of the Kurdistan region, Nechirvan Barzani and also Prime Minister Masrour Barzani held a series of special meetings during the past two days, with the US ambassador to Iraq , and also a high-level official in the US State Department.”

He pointed out that “the Kurdish leaders asked the Americans to mediate with Baghdad and pressure it, in order to agree to hand over the region to its share of the budget, for fear of major disturbances and demonstrations in the cities of Kurdistan, especially in light of the economic crisis and the great suffering of the citizen, as a result of not receiving salaries for many months “.

And the Kurdish delegation that visited Baghdad recently failed to reach an agreement that would guarantee fixing the region’s share in the budget, in light of demands from a number of political forces to hand over the region to its oil in full. End / 25 p

Shafaq News / The Iraqi Forces Bloc announced, on Saturday, that the vote on the General Budget Law for 2021 will be imminent, noting that the final version of the law will be presented to the political blocs before the voting session.

The deputy head of the bloc, Raad Al-Dahlaki, told Shafaq News Agency, “The Parliamentary Finance Committee is in the process of setting the final points of the budget law and is very keen to present the latest version of the law to the political blocs despite the different views on some articles of the law.”

He added that “the Finance Committee includes representation of the political blocs and is aware of the amendment taking place in the articles and paragraphs of the budget law. The final version of the law will be considered before voting.”

Al-Dahlaki pointed out that “the budget law will be presented to a vote in the coming days, but it has not yet been determined when the date for the vote on the law has been set.”

Representatives in the Iraqi parliament announced that the Finance Committee has completed nearly 95% of the articles and items of the current year budget.

Al-Rafidain Bank revealed, on Saturday, a new electronic program that allows immediate loan delivery, specifying the date of its launch.

The director of the bank, Hussein Ali, said in a statement to the official news agency “Conscious”, which was seen by “Al-Iqtisad News”, that “the management of Rafidain Bank decided to implement the accounts for granting advances to employees and retirees between the bank and the global smart card company,” pointing out that “for four months A succession of work, the bank was unable to apply the wallet, and the bank did not receive the smart card program.

Muheisen explained that “all programs are exclusively in the hands of the global company, so the bank was forced to intensify efforts to create a program to launch the advances, and a program that keeps pace with modernity has been established, and it has been installed in some branches of the bank and trained staff on it so that they are ready to work next week.”

He pointed out that “this program allows applying for advances and immediate receipt of the same day from the bank’s branches.”

He pointed out that “there are no cases of blackmail because the work is electronic, and there are teams to monitor, diagnose negative cases and treat them if any,” indicating that “the bank has raised the savings interest to 4.5% and fixed deposits to 6%.”