A group of American soldiers in Iraq during one of the patrols, Shall Gurga, northern Iraq, August 28, 2010, Joe Biden, the US Vice President, announced on the first of September that the American forces had completed the operation to liberate Iraq, but that they would start a new mission in Iraq which he called Operation; The new dawn ;. Through this new operation, the remaining US forces interact with the Iraqi Army forces during operations and can also assume a civilian role and combat terrorism, if needed. An archive photo

The American “Fox News” channel reported that the international coalition led by Washington has raised the threat level to the American forces in Iraq, and put the forces at the Balad base on alert for any Iranian response after the bombing of militias affiliated with Tehran on the Iraqi-Syrian borders yesterday

The channel said that only necessary activities would be permitted at the base of “Balad”, with the imposition of mandatory preventive measures on anyone outside the fortified buildings at the base.

According to a report by “Fox News”, such a situation may last for several days, and it comes as a routine precautionary measure, which was taken based on the current field conditions.

The base, which hosts the international coalition forces, was subjected to missile strikes last week, and the United States accused “Iranian-allied militias” of being behind the attack.

Last night, the United States launched an air strike on sites in Syria, which it said belonged to “Iran-allied factions,” and US forces in Iraq feared a possible response to the strikes in Syria, according to a Fox News report.

Shafaq News / The head of the Al-Fateh Alliance, Hadi Al-Amiri, called on Friday, Prime Minister Mustafa Al-Kazemi to investigate the American airstrike, which he said had targeted the Popular Mobilization Forces.

Al-Amiri said in a statement received by Shafaq News, “We call on the Prime Minister and Commander-in-Chief of the Armed Forces to investigate the American strike that took place last night in the Iraqi-Syrian borders.”

He added, “The information available to us indicates that this is targeting the Popular Mobilization Forces stationed on the Iraqi-Syrian borders and not as the US Defense Department claims that it is targeting the Iraqi Islamic Resistance factions in the Syrian territories.”

Al-Amiri also called on Al-Kazemi to “investigate the American narrative which claims that there is cooperation between the Iraqi government and the US Department of Defense to achieve this strike.”

He said, “This is a dangerous statement to disturb the unity and harmony between the security services,” adding, “For the utmost necessity and national importance, we are waiting for the results of this investigation to be revealed, so that our people know what is happening.”

And the US Department of Defense announced earlier that it had launched air strikes on factions loyal to Iran in the Syrian region of Albu Kamal, on the borders of Iraq.

In a statement, the defense said that the strikes destroyed “many infrastructures located at a border point used by Iranian-backed militias,” including the Iraqi “Hezbollah Brigades” and the “Sayyid al-Shuhada” Brigades, two factions within the ranks of the Iraqi Popular Mobilization Forces.

In the wake of the bombing, US Defense Secretary Lloyd Austin said, “The operation came after the United States obtained intelligence from Iraq, saying that” Washington encouraged the Iraqis to investigate and provide them with intelligence information, and that this was very useful in determining the target. ”

However, the Iraqi Ministries of Defense and Interior denied any information coordination with Washington regarding the raid, which the Syrian Observatory for Human Rights said left 22 dead.

Shafaq News / On Friday, the Iraqi Parliament announced that it will resume holding its sessions in early March.

He mentioned the meeting agenda, which was issued by the Parliament Media Office and reported to Shafaq News; Parliament will hold its 38th session in the first legislative term on the first Monday of next March at 5:00 pm.

The agenda included 7 paragraphs that will be deliberated within the session as well as the conclusion of the session. 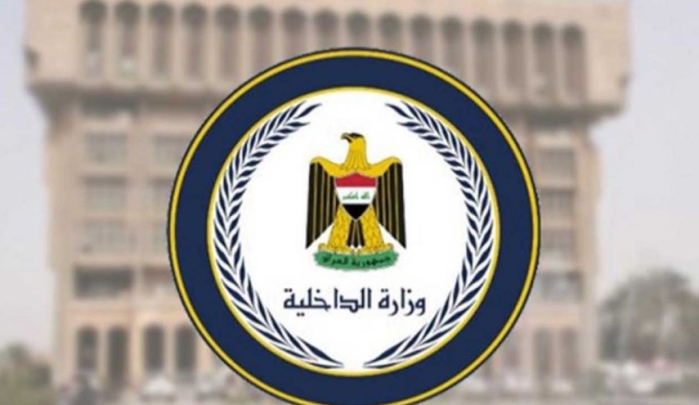 The Ministry of Interior denied, on Friday, that it had shared any intelligence information with the international coalition related to the air strike in eastern Syria.

In a statement received by Mawazine News, the ministry stated that it would like to clarify, “and within the framework of the statements and statements related to the exchange of intelligence information with the international coalition forces regarding an air strike carried out in the Syrian territories that the mechanisms of cooperation with the international coalition are limited to developing the capabilities and skills of the security forces in The field of police work in a way that enhances the capabilities of the Ministry’s forces in enhancing internal security, fighting crime and achieving community peace.

She added, “Accordingly, no intelligence information was exchanged by the competent ministry agencies and the international coalition forces, regardless of its size, related to the aforementioned air strike.” Ended 29 / A43

, Minister of Finance, Abd Allawi, confirmed, on Friday, that Iraq internationally maintained its credit rating at B, with an emphasis on financial and economic stability, according to the international agency Standard and Poor’s S&P.

The media office of the Minister of Finance stated, in a statement received by Mawazine News, that “Allawi participated in a dialogue session to discuss the economic and financial developments and the credit rating of Iraq via video conference, which included experts and specialists from the ministries of finance and oil and representatives of the Central Bank.”

The statement added, “During the dialogue, they discussed the economic and financial developments and the credit rating of Iraq and the factors that contributed to maintaining the credit rating at -𝗕 degree and the emphasis on financial and economic stability, according to S&P Standard and Poor’s Agency.”

Allawi said, “The change in the exchange rate contributed to alleviating pressure on foreign reserves and strengthened the ability of the Ministry of Finance to provide local financing and recovering crude oil prices at the beginning of 2021 compared to what they were in 2020.

” The future outlook was also touched upon. The stability of the Iraqi economy that came to reflect the continuation of foreign currency reserves at a level that increases the external public debt service and Iraq’s ability to pay off its external debt obligations over the next (12) months. ”

It is worth noting that Standard & Poor’s S&P agency and since the outbreak of the Corona pandemic, It took decisions to reduce the rating from stable to negative for more than 80 cases around the world. Ended 6/29 n

(Baghdad: Al Furat News) The Ministry of Foreign Affairs announced that Foreign Minister Fuad Hussein will visit the Iranian capital, Tehran, tomorrow, Saturday, in the second such visit to him this February.

In a statement, the ministry’s spokesman Ahmed Al-Sahhaf said in a statement that Al-Furat News Agency received a copy of, that Hussein “will make an official visit to the Islamic Republic of Iran tomorrow, and it will continue for one day, during which he will hold meetings with dignitaries in Iran.”

“The talks will focus on bilateral relations between Baghdad and Tehran, discuss the situation at the regional level, support paths to achieve balance and avoid tension and escalation,” he added.

He pointed out that “the visit of the Foreign Minister to the Islamic Republic of Iran after his visit to the Kingdom of Saudi Arabia during the period from February 22 to February 23, 2021.”

{Baghdad: Al-Furat News} A spokesman for the deputy head of the Kurdistan Regional Government, head of the Kurdish delegation, Qubad Talabani, revealed that the region’s delegation, on its recent visit to Baghdad, had discussed with the political parties and handed over all information related to expenditures, oil revenues and the number of employees to the federal government.

“The delegation is awaiting the preparation of the second draft of the general budget bill by the Finance Committee in the House of Representatives, which is the demand of the political parties, and it was discussed during the meetings,” Samir Hawrami said in a press statement.

He explained, “The second proposal has not been prepared yet, and the draft budget law for the year 2021 has been sent to the Presidency of Parliament without deducting the region’s share, so we are waiting for the Finance Committee to prepare a draft of paragraphs 10 and 11 of the draft law on the region’s share in the budget and then vote on the entire project. Legal in the House of Representatives. ”

The Parliamentary Finance Committee announced last Tuesday that it had sent a letter on February 15 to the Presidency of the House of Representatives stating that it had completed the semi-final draft of the 2021 budget draft and that the only pending point was the text on the obligations of the Kurdistan region, which was detailed in Article 11 of project of law.

She pointed out that it “met with the political blocs of various components to bring the points of view closer and to come out in agreement with the entirety of the texts contained in that draft, but until now we await a final form of agreement on this article.”

{International: Al Furat News} The US Secretary of Defense Lloyd Austin said that the US military relied on intelligence information from the Iraqi side to bomb areas in eastern Syria at dawn on Friday.

Austin said he was “confident of the accuracy of the strike.”

Earlier, the Pentagon confirmed that US air strikes destroyed “several facilities” located at a border control point between Iraq and Syria, in response to the recent attacks against American employees in Erbil in the middle of this month.

For its part, Russia condemned the US raids.

A source at the Russian Foreign Ministry said that Russia condemns the night strike by the United States against Syria, and considers it an unacceptable violation of international law.

“The strike targeted the territories of a sovereign state that is a member of the United Nations. This is an unacceptable violation of international law,” RIA Novosti news agency quoted the source as saying. ”

Ammar Al-Masoudi must be identified. 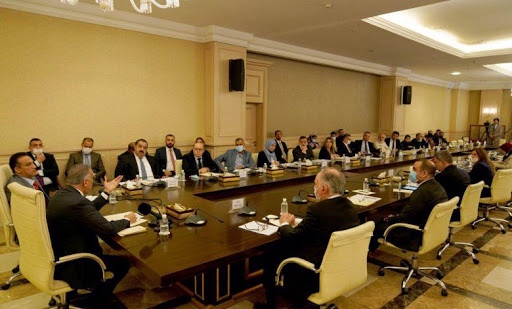 Shafaq News / Today, Friday, the Parliamentary Finance Committee denied setting a date for voting on the 2021 General Budget Law, while noting that the Cabinet did not respond to parliamentary amendments to the Budget Law.

A member of the committee, Ahmed Haji Rashid, told Shafaq News, “The reports that talk about setting a date for voting on the budget law are incorrect,” stressing that “political disputes over the Kurdistan Region’s share of the Budget Law continue.”

He added that “the region’s share of the budget is still 12.67% and has not been decided yet, despite the Kurdish blocs’ approval of the government text previously agreed upon, but until now there is no agreement to amend this paragraph or replace it with a new text.”

Haji Rashid indicated that “the Council of Ministers has not yet responded to the amendments that were drafted and rented by the Parliamentary Finance Committee on the articles of the budget law.”