Flags of the Kurdistan Region and Iraq (File)

SULAIMANI — Iraq’s Council of Representatives is expected to vote on the draft 2021 Federal Budget Law later this week with Thursday as the most likely date, member of the Finance Committee Sadiq Mudlul al-Sultani said on Friday (February 19).

Al-Sultani, who is a member of State of Law, told the state-run Iraqi News Agency (INA) that the Kurdistan Regional Government (KRG) and the federal government intend to come to an agreement over the former’s budget share ahead of the vote.

A delegation of KRG negotiators returned to Erbil from Baghdad on Friday without revealing whether they had achieved a breakthrough over about the Region’s share of the budget and what the KRG will have to send to Baghdad in order to secure it.

“It is likely that the budget will be presented for a vote next Thursday, after the final agreement is drawn up between the two parties about the draft budget,” al-Sultani said.

“There is a common understanding about oil exports, other revenues, and the Region’s share,” al-Dulaimni told INA.

{Baghdad: Al Furat News} The Parliamentary Finance Committee revealed that it had received a new proposal regarding the Kurdistan region’s share in the draft federal budget law for 2021.

Committee member Magda Al-Tamimi said in a press statement, “Discussions are continuing regarding the budget paragraphs and receiving proposals regarding them, and there are two matters awaiting a decision on them and the budget is submitted to the vote, the first is related to the Kurdistan region file and the other concerns final review of technical matters.”

She pointed out that “after 46 meetings and more than 500 workshops, the issue of resolving the topic of the region remained, and among the proposals that were presented was what was mentioned in the text of the budget coming from the government, represented by paragraphs {10 and 11} concerning the region, and the committee members had comments on Article 11.”

She added, “There are alternatives being discussed within the political blocs, as a text arrived Thursday, which the Finance Committee is studying in order to make a decision on it, as well as the sub-committee’s submission of its report on reviewing the data that were submitted by the Kurdistan Regional Government and the additional data that it requested and is waiting for its receipt by Provincial government. ”

Al-Tamimi pointed out, “The Kurdish side has already announced its approval of what is contained in the budget submitted by the government, which includes the delivery of 250 thousand barrels per day, as well as non-oil revenues, in return for payment of dues to the region by the federal government.”

She also indicated, “the existence of a paragraph concerning the Iraqi Trade Bank, indicating that, according to its information, there are 4 billion dollars in the bank’s branches in the region that had been disposed of through a decision of the former bank manager, and there are letters in this regard between the Finance Committee and the current bank manager to send the priority of the matter.”

She added that there are reports with the Ministry of Oil about different numbers for the quantities produced in the region. The quantities delivered from the region must be determined precisely after deducting the local consumption quantities, so that the remainder will be delivered exclusively to the SOMO company or the federal government receives the file completely, including re-negotiation with the companies. Oil. ”

Al-Tamimi noted that this matter is currently being discussed and is waiting to be resolved within the next few days, in preparation for completing the draft budget and presenting it in Parliament and starting voting on its paragraphs. ”

The number of readings 132

Baghdad / Al-Masala: The Finance Committee has set, Friday, February 19, 2021, the date for voting on the federal budget for 2021.

He added that “the agreement is to deliver 250 thousand in-kind barrels per day in favor of the National Oil Marketing Company (SOMO), and the remaining production will be paid in the form of production, marketing and domestic consumption costs in the region.”

The Pentagon has opened the door to the possibility of sending more American forces to the Middle East as part of a newly expanded NATO training mission to support Iraqi forces and ensure ISIS never rises again.

The “people” channel on Telegram … our last updates, always

A Pentagon spokeswoman, Jessica L. McConnellty, told CNN, and “People” followed her (February 19, 2021), “The United States is participating in the force formation process for the NATO mission in Iraq and will contribute its fair share in this important and expanded mission.”

US Defense Secretary Lloyd Austin spoke about the mission with his NATO counterparts during a meeting with defense ministers on Thursday.

Late Thursday night, Pentagon spokesman John Kirby made it clear that “there are no plans to send more US forces to Iraq.” However, a defense official told the channel that US forces could also support the mission from outside the country.

“We support the expanded NATO mission in Iraq and will continue to do so, but there are no plans to increase US troop levels there,” Kirby said on Twitter.

The North Atlantic Treaty Organization (NATO), Thursday, announced the increase in the number of its forces in Iraq in order to expand the task of training Iraqi forces, while no decision has yet been made on the withdrawal from Afghanistan.

NATO Secretary General Jens Stoltenberg said in a press conference after a videoconference with NATO defense ministers that “it has been decided to expand the training mission in Iraq to support Iraqi forces in the face of terrorism and to ensure that ISIS does not return.”

Stoltenberg added that “the number of NATO forces will gradually increase from 500 to about 4 thousand, and their deployment will extend to areas outside Baghdad.” Allow the Iraqis to achieve stability in their country. ”

He pointed out that the increase in NATO forces will be gradual and come at the request of the Iraqi government.

Austin welcomed the “expanded role” of the NATO mission in Iraq, according to a reading of the discussions provided by the Pentagon. He expressed confidence that all the work done so far with the Iraqi government and Iraqi security forces will lead to a self-sufficient mission.

In a related context, the “Daily Mail” newspaper quoted military sources as saying that the International Coalition Forces intend to increase the number of its soldiers in Iraq to 5 thousand members.

The newspaper said that hundreds of British soldiers would be sent to Iraq in the largest increase of British forces there since the last Gulf War.

The number of British forces is expected to double or triple later this year.

In total, 179 British soldiers have lost their lives in Iraq since March 2003, while the last troops withdrew there in May 2011.

Currently 100 British personnel are stationed there to train Iraqi security forces. Within the framework of the international coalition’s mission to combat ISIS, with the possibility of them playing security roles.

The announcement by British Defense Minister Ben Wallace last night that hundreds of soldiers would be dispatched came days after a missile attack on an international coalition base near Arbil airport in northern Iraq killed a civilian contractor and wounded nine others.

In support of the decision, the former commander of British forces in Afghanistan, Richard Kemp, said: “Iraqi forces are facing an increasing threat from ISIS, as there was a double suicide attack in Baghdad in January in addition to daily terrorist attacks in different parts of the country.”

Kemp explained that the return of the force to ISIS “has led to several terrorist attacks in Europe including the United Kingdom.”

He added, “We and NATO must do everything in our power to help the Iraqis improve their military capabilities so that they can impose greater control over their lands. In this way, we will protect our homeland as well.”

Shafaq News / The Kurdistan Democratic Bloc announced today, Friday, that a “preliminary agreement” has been reached to settle the region’s share in the general budget law, while indicating that next week will be the date for voting on the budget.

Deputy for Democrat Mayada al-Najjar told Shafaq News Agency, “The proportion of the Kurdistan Region in the General Budget Law is 12.67%,” noting that “this percentage goes as salaries for employees, Peshmerga, political prisoners, social care and ministerial expenditures.”

She added, “The Kurdish delegation and the political blocs have reached a preliminary agreement to settle the region’s share in the budget law, but political dialogues and negotiations are still continuing to resolve the issue.”

Al-Najjar added, “We are awaiting the arrival of the draft budget bill to the Presidency of the Council of Representatives to vote on the budget next week, as determined by the Parliamentary Finance Committee.” 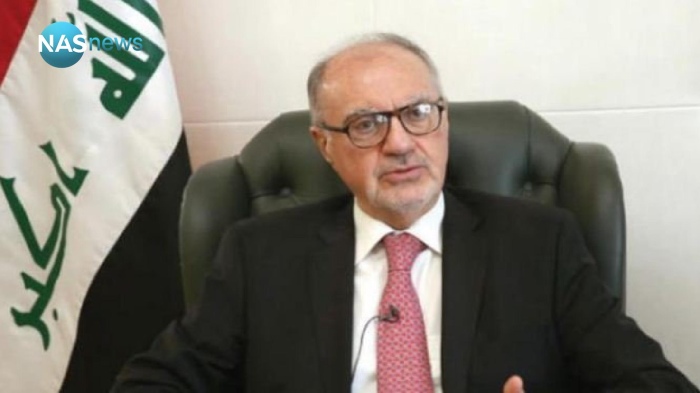 On Friday, Minister of Finance Ali Allawi discussed with the Ambassador of the Kingdom of the Netherlands to Baghdad, Michael Rentinar, and the official of the Economic Department, Merrill de Konink, the economic and financial aspects and the importance of enhancing cooperation opportunities between the two countries.

The “people” channel on Telegram … our last updates, always

The ministry’s media office said in a statement, which “people” received a copy of (February 19, 2021), “The Minister of Finance, Ali Abdul-Amir Allawi, received the Ambassador of the Kingdom of the Netherlands to Baghdad, Ambassador Michael Rentinar, and the official of the economic department, Mrs. Merrill de Konink, at the ministry’s headquarters.”

The statement added, “During the meeting, they discussed the overall bilateral relations between the two countries, especially the economic and financial aspects, and the importance of enhancing cooperation opportunities on various levels in a way that meets the aspirations of the two peoples.”

According to the statement, the minister stressed “the importance of opening the horizons of constructive cooperation,” stressing that “Iraq’s strategy in its balanced relations with all is based on the observance of common interests with world countries in a way that serves progress and prosperity for our people and friendly peoples.”

The statement continued, “The ambassador expressed his thanks to the minister for the good reception, stressing at the same time the desire of his country’s government to strengthen bilateral relations and cooperation with Iraq for the benefit of the two countries.”