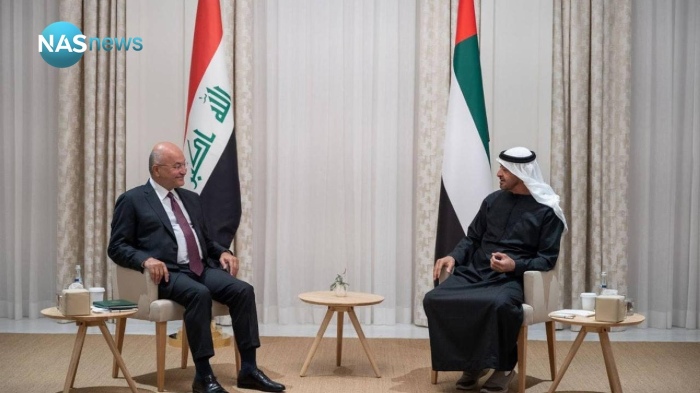 The President of the Republic, Barham Salih, discussed with the Crown Prince of Abu Dhabi, Mohammed bin Zayed Al Nahyan, developments in the regional and international arena, stressing the importance of supporting dialogue, reducing tensions, and stabilizing the foundations of security stability in the region.

The Media Office of the Presidency of the Republic stated in a statement, which “people” received a copy of, (February 12, 2021), that “the President of the Republic, Barham Salih, met Sheikh Mohammed bin Zayed Al Nahyan, Crown Prince of Abu Dhabi, during a working visit to the United Arab Emirates. Discussing bilateral relations between Iraq and the brother country, and the need to develop and develop them to serve the interests of the two brotherly peoples.

According to the statement, Saleh congratulated the leadership of the UAE and its people for the successful arrival of the “probe of hope” to Mars, considering that a “high scientific achievement and a source of pride for the peoples of the region, wishing the leadership and the brotherly Emirati people more prosperity, progress and prosperity.”

“During the meeting, developments on the regional and international arena of common interest were discussed, as the importance of supporting dialogue, easing tensions, stabilizing the pillars of security stability in the region and supporting development for the peoples of the region,” the statement indicated.

According to the statement, bin Zayed expressed: His sincere thanks and appreciation to the President of the Republic, Barham Salih, for his good feelings towards the achievement of the UAE, stressing that the UAE is keen to achieve stability and security of Iraq, safeguard its sovereignty and interests, and continue to support everything that is good for its brotherly people.

Washington, DC: On February 8, 2021 the Executive Board of the International Monetary Fund (IMF) concluded the Article IV consultation [1] with Iraq.

The COVID-19 pandemic and a sharp decline in oil revenues have exacerbated Iraq’s longstanding economic vulnerabilities. Real GDP contracted by an estimated 11 percent in 2020, reflecting a slowdown in non-oil activity and cutbacks in oil output as a result of OPEC+ decisions. Large fiscal and external current account deficits of 20 and 16 percent of GDP, respectively, constrained the government’s ability to mount an effective fiscal response to the crisis.

The authorities have begun to take much-needed steps towards ensuring macroeconomic stability while protecting the vulnerable. To help safeguard foreign exchange reserves and reduce the external imbalance, the Central Bank of Iraq has announced a devaluation of the exchange rate. Alongside, the draft 2021 budget, submitted to Parliament, aims to reduce the fiscal deficit through measures to contain the unsustainable expansion of government wage and pension bills and to raise non-oil revenues, while significantly boosting targeted assistance to shield the most vulnerable. The authorities have also set aside sizable resources in support of their efforts to minimize the loss of life to COVID-19, including through acquisition and distribution of a vaccine.

The economy is expected to gradually recover, and the imbalances to narrow, although the outlook remains challenging. Real GDP is projected to return to its pre-pandemic level by 2024. The fiscal and external current account deficits are projected to decline over the medium term. Government debt is expected to peak in 2023 and decline gradually thereafter.

This outlook hinges on strong implementation of reforms and is subject to significant downside risks. Political constraints ahead of the parliamentary elections, renewed bouts of social unrest, or security risks could undermine the reform efforts, putting macroeconomic stability at risk. Furthermore, pandemic‑related risks and oil market uncertainties could further complicate the economic situation.

Executive Directors agreed with the thrust of the staff appraisal. They noted that the COVID 19 pandemic and the sharp decline in oil revenues have further exacerbated Iraq’s existing significant socio-economic fragilities. Directors also noted the authorities’ efforts to strengthen the health policy response, boost social safety nets, and reduce the fiscal and external deficits. Nevertheless, downside risks to the economic outlook remain significant amid a challenging socio-political environment. Directors emphasized that implementing strong policies and structural reforms is essential to ensure macroeconomic stability and achieve sustainable and inclusive growth.

Directors emphasized that reducing fiscal imbalances is critical to ensuring fiscal and debt sustainability. They welcomed the authorities’ planned fiscal reforms in the “White Paper” and encouraged their careful prioritization and swift implementation while minimizing the impact on the vulnerable. To create room for the much-needed reconstruction and social safety nets, Directors highlighted the importance of strengthening public finances. To this end, they called for a comprehensive civil service reform to contain the public wage bill and recalibration of the pension system to put it on solid financial footing. Priority also needs to be given to increasing non-oil revenues and strengthening public financial management to reduce the fiscal risks stemming from off-budget expenditures and government guarantees.

Directors concurred that the recent exchange rate adjustment would help reduce external imbalances and preserve foreign exchange reserves. They underscored that a strong fiscal framework remains critical to ensuring the credibility of the new exchange rate peg as well as minimizing future need for monetary financing of the budget. Directors also saw need for further monetary policy measures by the central bank to contain inflation.

Directors stressed that wide-ranging structural reforms are necessary to cement macroeconomic stability and pave the way for higher and more inclusive growth. They underscored that reform efforts should focus on stemming the financial losses in the electricity sector. This requires sustained efforts to strengthen governance and improve collection, as well as gradual adjustment of tariffs to increase cost recovery and reduce arrears. In addition, Directors emphasized the importance of reducing corruption in key public institutions, continued improvement and effective implementation of the AML/CFT framework, restructuring of large state-owned banks to foster financial stability, and developing the private sector.

Directors noted the authorities’ interest in emergency financing with the Fund to support their stabilization and reform efforts with some Directors encouraging a longer-term arrangement to address structural challenges.

It is expected that the next Article IV consultation with Iraq will take place on the standard 12-month cycle.

The number of readings 96

Baghdad / Obelisk: The Iraqi Private Banks Association announced, on Thursday, February 11, 2021, that the Central Bank launched a loan of 15 million dinars for national employees whose salaries are exclusively in government and private banks as part of the 1 trillion dinars initiative.

The Executive Director of the Association of Private Banks, Ali Tariq, said in a statement, “The Central Bank of Iraq has decided to support workers in state, public sector and security institutions by granting them easy personal loans,” adding that “the loan does not exceed 15 million dinars without interest, but at a commission of 4%, with a repayment period not exceeding 5 years, without a guarantor. ”

Tariq noted that “the loan includes only national employees whose salaries are in banks, calling on state institutions to localize the salaries of employees so that they can benefit from them.”

He emphasized that “this loan is an unspecified personal, which the employee can benefit from in covering his personal needs in daily life, such as construction, marriage, buying a car and others.” 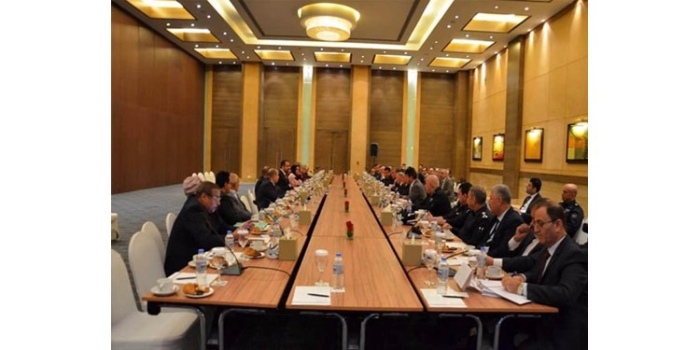 The number of readings 22

Baghdad / Al-Masala: A meeting was held at the headquarters of the Central Bank of Iraq, Thursday, February 10, 2021, headed by the head of the Border Ports Authority, Major General Omar Adnan Al-Waeli, and in the presence of the Central Bank directors and representatives of the General Authority for Customs, the General Company for Iraqi Fairs and the General Secretariat of the Council of Ministers.

The media office of the Central Bank stated in a statement received by Al-Masala, that the meeting discussed the issue of collecting the amounts of customs and tax fees for goods imported from all border outlets and collecting them in advance by the banks accredited to the Central Bank of Iraq. 22 of 2020, Secretary General of the Council of Ministers, Hamid Al-Ghazi.

The statement added that the electronic linking of the data issued by the Central Bank, taxes and customs, the exhibitions company and the Border Ports Authority to control invoices issued for importing goods and the pre-fulfillment of their customs and tax fees for the provisions of controlling state revenues and preventing waste of public money were discussed.

He continued: This step is considered and will be preceded by subsequent steps taken by the Border Ports Authority to organize work and exercise its supervisory role by using the electronic governance system on all the work joints of the working departments at the border crossings. 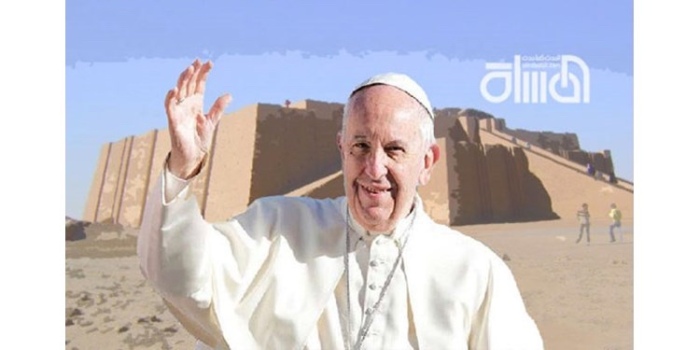 The number of readings 51

Baghdad / Obelisk: The delegation of Pope Francis, the Vatican, arrived Thursday, February 11, 2021, to the province of Najaf, in preparation for the Pope’s visit next March.

A statement issued by Najaf Airport, received by the “obelisk”, stated that the delegation of Pope Francis of the Vatican had arrived through Najaf International Airport in preparation for the visit of Pope Francis next March.

The delegation was received by Director of Najaf Al-Ashraf International Airport, Issa Al-Shammari.

On Thursday, February 11, 2021, the Iraqi embassy in the Vatican clarified the scheduled meeting between Pope Francis I during his visit to Iraq next month with the supreme religious authority, Grand Ayatollah Imam Ali al-Sistani, in Najaf.

According to a document from the embassy to the Ministry of Foreign Affairs, Department of Europe, received by the obelisk, the newspapers confirmed that the two sides discussed a framework condemning everyone who attacks life and working to strengthen interfaith dialogue.

Last Monday, the website of Pope Francis of the Catholic Church published the program of the special visit to Iraq, scheduled to take place on March 5-8, 2021.

The press house of the Holy See stated, in a statement, that the program of Pope Francis’ visit to Iraq will be from the fifth to the eighth of March 2021, as he will leave Rome on Friday, the fifth of March, from Fiumicino Airport in Rome, to reach Baghdad International Airport, where the reception will take place. the official.