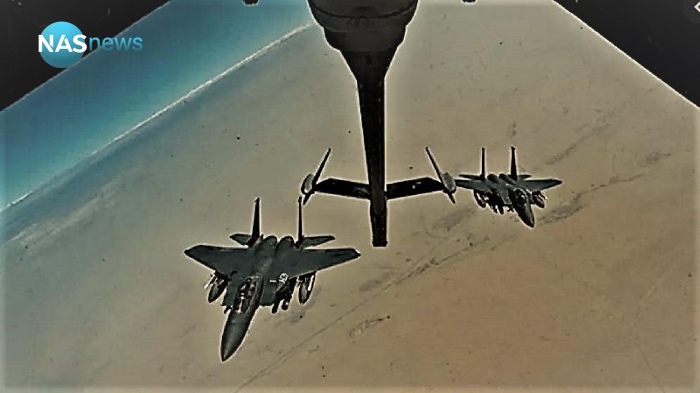 On Friday, the US Department of Defense Central Command announced the destruction of targets of “pro-Iranian groups” near the Iraqi border, in response to the recent missile attacks in Erbil and Baghdad. 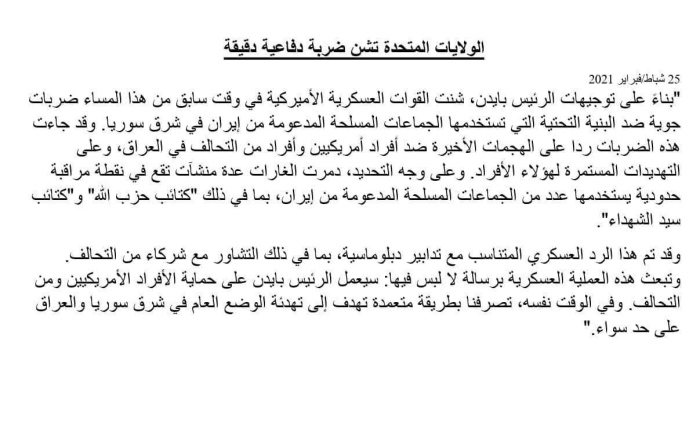 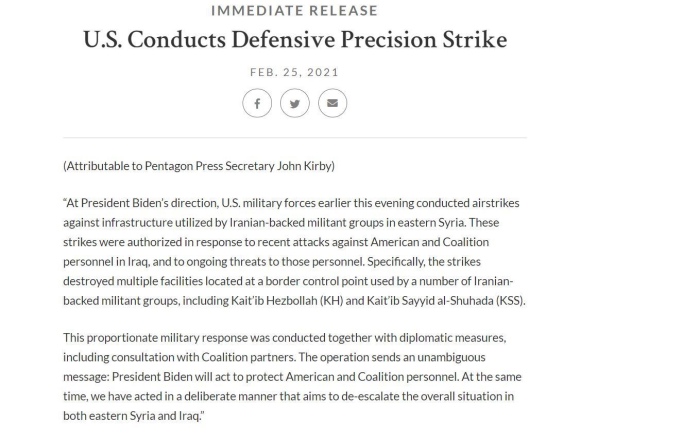 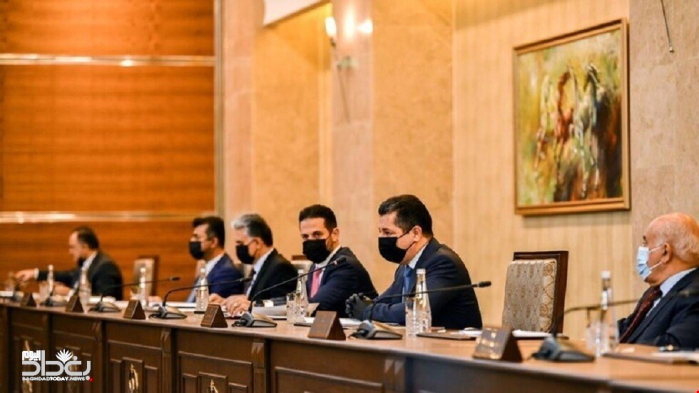 Today, Thursday, a member of the Kurdistan Democratic Party, Repin Salam, confirmed that the regional government will knock on all doors in an attempt to reach an agreement with Baghdad regarding its share in the budget.

In an interview with (Baghdad Today), Salam said, “The region will knock on all legitimate doors, including the mediation of friendly countries and the United States, and this was what was in the last call that the regional government head, Masrour Barzani, brought together with former US Secretary of State Mike Pompeo.”

He added that “the region is ready for mediation to be played by the United States, the United Nations mission, or any other country as long as the dispute with Baghdad is political and not technical, because opposition to voting on the region’s share in the budget is purely political, especially since the region adhered to all the conditions of the federal government.”

And local media had indicated that the region had requested mediation by the United States with the federal government in an attempt to reach an agreement to fix Kurdistan’s share in the budget.

The Kurdistan Regional Government confirmed on Wednesday (February 24, 2021), the continuation of negotiations with the federal government in Baghdad, in the presence of a readiness, which it described as “the best”, to solve the issue of the 2021 budget, during the Council of Ministers held its regular weekly meeting headed by the Prime Minister, Masrour Barzani and in the presence of the Vice President of the Council Minister Qubad Talabani. 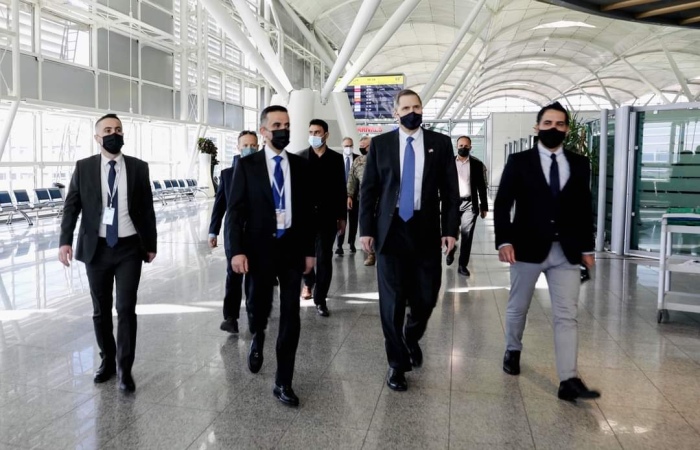 The US ambassador to Baghdad, Matthew Toller, discussed with the presidents of the Kurdistan region, Nechirvan Barzani, and the regional government, Masrour Barzani, several files, most notably the recent missile attack that targeted Erbil.

The statement added, “The meetings included a range of issues, including US support for the Kurdistan Regional Government and the Iraqi federal government in the aftermath of the February 15 missile attacks in Erbil, as well as regional relations, support for the implementation of the Sinjar Agreement, and the safe, dignified and voluntary return of the displaced to the country.” Their homes. ”

He continued, “The meetings also discussed the budget negotiations of the Kurdistan Regional Government with the Government of Iraq, as well as relations between the Patriotic Union of Kurdistan and the Kurdistan Democratic Party.”

The US ambassador, Matthew Toller, stressed, according to the statement, “the importance of unifying the Kurdistan region of Iraq and its government as the best way to serve its people, economic recovery, provide security and a strong investment climate for business.”

Toller stressed “the importance of freedom of expression and the press,” noting that “the United States remains committed to working with the Kurdistan region of Iraq and civil society on this issue and ensuring the consolidation of relations with the Biden administration.”

Ambassador Toller concluded, according to the statement, “his visit by meeting Baz Raouf Karim, Director of Car Group, during which the two discussed the importance of diversifying and modernizing the energy infrastructure in the Kurdistan region of Iraq and the energy market.” 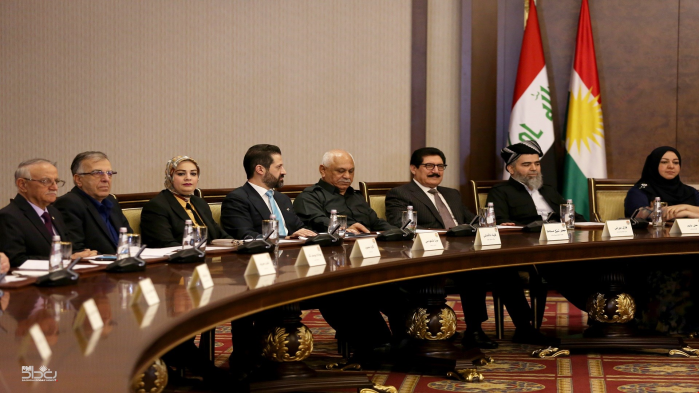 A member of the House of Representatives, Zahra Al-Bajari, revealed today, Thursday, the latest developments in the negotiations between the Kurdistan region and Baghdad regarding the fiscal budget for 2021.

Zahra Al-Bajari said, in an interview with (Baghdad Today), that “the budget is one of the very important laws in the country, Its resolution was delayed due to the position of the Kurdistan region, which has not changed so far, “referring to” a move by some political blocs that pushed its members to travel to the region to change their views in order to push Kurdistan to abide by its obligations in accordance with the legal framework. ”

Al-Bajari added, “If the positions do not change, the political forces will resort to holding a decisive meeting with the leaders of the region to take the appropriate decision in the coming days,” noting that “the majority of parliamentarians demand the application of a single standard in dealing with the governorates of the south, central and north, including the Kurdistan region.” Regarding wealth, because it represents a constitutional and legal framework. ”

A member of the House of Representatives confirmed that in the event that “there is no agreement with the region, the majority will be resorted to very much to resolve the vote on the 2021 budget.”

The deputy of the Saeron Alliance, Riad Al-Masoudi, confirmed, on Wednesday (February 24, 2021), that the 2021 budget law cannot be passed without the Kurdish political forces.

Al-Masoudi said in an interview with (Baghdad Today), “The political forces do not want to raise new political problems at the present time, by passing the 2021 budget without the participation or approval of the Kurdish political forces, because the political situation does not bear such problems.”

He explained, “Passing the 2021 budget without the Kurds is unlikely, because the political situation is congested, and we are on the verge of parliamentary elections, and there are political forces that do not want to pass the budget without the Kurds from the Shiite and Sunni forces, and that is why passing the budget can only be through agreement and consensus among all Political forces”.