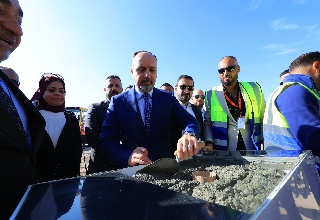 Europe enthusiastically welcomed the administration’s proposal to impose a minimum tax on corporate profits of at least 15% globally, bringing the world closer to a bargain on sweeping changes in how much multinational corporations pay and where they pay governments.

“This is really a big progress,” said German Finance Minister Olaf Scholz upon arrival at a meeting with his European counterparts in Lisbon, minutes after his French counterpart also gave a positive reaction.

“We will really have a chance over the summer to get a deal, and a deal that we’ve been working on for a long time,” Schultes added.

The latest proposal in the race for an agreement between 139 countries is to impose a tax of less than 21%, previously proposed by the United States on corporate profits abroad, a rate considered high by some countries.

Before President Joe Biden arrived at the White House, talks at the Organization for Economic Cooperation and Development focused on a tax rate of 12.5%, as a minimum.

While hurdles remain, including a row over the treatment of digital giants like Facebook and Alphabet, which owns Google, the momentum from the Biden administration has led to a shift in negotiations between member states of the Organization for Economic Cooperation and Development (OECD). It bogged down for years, due to more technical complications, bickering across the Atlantic and trade tensions.

The looming deal increases the likelihood of significantly higher bills for the world’s largest companies.

In 2020, the Organization for Economic Cooperation and Development estimated that the global minimum tax rate, in addition to the US rules themselves, would boost government revenues by about $ 100 billion annually, a number that would rise if a higher tax rate was adopted.

The recent US proposal for a 15% tax rate is only half the truth, because the minimum issue is only one of the two pillars in the OECD negotiations.

European countries welcomed Biden’s separate proposal on the thorny issue of where companies face paying taxes. But talks about that are still ongoing.

The United States has proposed a simpler and narrower scope, with tax revenues cut from the 100 or so largest multinational corporations.

But officials in other countries have doubts about whether the proposed tax rate will cover all the digital giants that they want to target, and there are special concerns that “Amazon” may not be covered by the new taxes.

The US proposal for the first pillar could also bring about significant changes to effective tax rates, particularly for tech-device manufacturers and pharmaceutical companies, according to research by Morgan Stanley.

Upon arriving at the Lisbon meeting, the French Finance Minister, Bruno Le Maire, said, “The main issue is not the tax rate, even if at 15%. It could be a good compromise between the expectations of all OECD members .. The main issue is Defining a global framework for taxes on digital companies and minimum taxes.

The new US proposal still faces opposition from countries such as Ireland, which impose low taxes on companies as part of a major economic development strategy.

Irish Finance Minister Paschall Donohue said last month that taxes could be part of a competitive offer for small countries, and that his government’s reservations about such a global measure “could be very strong”.

According to a spokeswoman for Donohue, he has taken note of the comments made by the US Treasury Department, and is looking forward to discussing the matter further with Treasury Secretary Janet Yellen.

For his part, Japanese Finance Minister Taro Aso, speaking to reporters in Tokyo, said that the US proposal represents progress, despite the need for more talks. Aso added that he expects a move towards global agreements, including taxes on digital companies, at the G20 summer meeting, but that final agreements may be reached later in 2021.

Secretary Yellen is making an ambitious effort to end the “global race to the bottom” on corporate taxation. This competition has eroded revenues from governments that raised their record levels of debt amid the COVID-19 crisis.

Yellen’s approach marked a shift from the Trump administration’s style and stimulated talks between nearly 140 countries on the issue. “It is imperative for multilateral action to end the pressure of corporate tax competition and the erosion of the corporate tax base,” the Treasury Department said in a statement on Thursday. The ministry stressed that 15% is the minimum, and that discussions should continue to be ambitious and push this rate higher.

The US Treasury Department’s proposal to impose a global corporate tax minimum of at least 15% comes on Thursday before a scheduled meeting on June 4-5 of the “Group of Seven” finance ministers in London, which will serve as a forum for major industrialized countries to reach consensus.

The Biden administration also hopes to reach a broad agreement among the member states of the Organization for Economic Cooperation and Development on a global minimum corporate tax rate, before Democratic lawmakers in Congress push for an increase in taxes on US companies.

The White House has proposed raising the tax rate to 28% for domestic companies, from 21%, to help save $ 4 trillion in long-term economic programs for President Joe Biden.