ERBIL, Iraqi Kurdistan — The ongoing reform push by Iraq’s Prime Minister Haider al-Abadi has brought about a sense of unity in the Kurdish ranks, unseen for the past couple of years.

Summary⎙ Print Despite their internal divisions, Kurdish parties are united in the face of Iraqi Prime Minister Haider al-Abadi’s plan to reshuffle the Cabinet.
Author Mohammed A. SalihPosted April 8, 2016

When Abadi declared plans in February to reshuffle his Cabinet, an unintended consequence of his efforts was uniting major Kurdish factions in opposition to his stated goals. Kurds have stood against Abadi’s efforts to circumvent established political blocs and pick technocratic ministers for his Cabinet without having them being nominated by political groups.

“The Kurdish unity has stemmed from understanding the delicacy of the current situation in Iraq and Kurdistan,” Tariq Gardi, an Iraqi member of parliament from the Kurdistan Democratic Party (KDP) that has the largest Kurdish bloc in the Iraqi parliament, told Al-Monitor. “Kurds agree that the principle of political partnership should be reflected in Baghdad’s institutions, as we Kurds are not just a political faction but a key component of this country.”

The five Kurdish blocs in the parliament in Baghdad have 62 seats in the 328-member chamber. The KDP has 25 seats, and the rest is divided among four other parties that are the Patriotic Union of Kurdistan, Gorran, Kurdistan Islamic Union and Kurdistan Islamic Group (Komal).

Although Abadi put forward 14 names at a parliament session March 31 as his choices for ministerial portfolios, the opposition from established Kurdish parties appears to have worked. They were against Abadi picking the ministers without consulting with them and objected to the reduced share Abadi has given to the Kurds. Now, Nizar Saleem Numan Doski, Abadi’s nominee to head the crucial Ministry of Oil, has said he will not accept the nomination if Kurdish blocs in the Iraqi parliament do not support him.

Kurds have even suggested that if Abadi is so keen to form a Cabinet of nonpartisan technocrats, he should also step down because he is a senior leader of the Islamic Dawa Party and as such does not fit the criteria he has set for his own Cabinet.

The current show of Kurdish unity in Baghdad comes amid deep fissures among those parties over a number of thorny issues in Iraqi Kurdistan.

At the heart of the disputes is the fate of the office of Iraqi Kurdistan’s presidency. Gorran and Komal have opposed the extension of Massoud Barzani’s tenure for another two years by a government body known as the Justice Ministry’s Consultative Council.

The political strife led to Barzani’s KDP taking the unusual step of blocking Gorran’s speaker of the Kurdish parliament from entering the Kurdish capital, Erbil, on Oct. 12, 2015, and expelling four Gorran ministers from the Kurdish Cabinet.

Ever since, the parliament has been in a state of limbo. Gorran is now back in its opposition role inside Iraqi Kurdistan and demands an overhaul of the establishment there. Before its expulsion from the government, Gorran was the second-largest bloc in the Kurdish coalition government in Erbil with four ministerial portfolios out of 21.

But despite the bad blood in Iraqi Kurdistan, both Gorran and Komal have stood together with the KDP and other Kurdish groups in Baghdad in opposing Abadi’s efforts to reform the Iraqi government. The Kurdish parties, in fact, appear to have developed an ability to compartmentalize their differences.

“There is currently a strategy by the Iraqi Kurdish parties to ensure there is a unified stance in Baghdad. This stance appears to be insulated from the political rivalries inside Iraqi Kurdistan,” Ahmed Ali, a research fellow at the American University of Iraq in Sulaimaniyah, told Al-Monitor.

Although Gorran has joined the Kurdish consensus in Baghdad with regard to Abadi’s moves, Sirwa Abdulwahid, a member of parliament from the party, said they support the prime minister’s reforms. “His reform efforts are good,” Abdulwahid told Al-Monitor. She added, “What we are against in regard to Abadi’s reforms is that the Kurdish representation in Baghdad’s institutions should not fall below 20% of the posts.”

Of the 14 ministers proposed by Abadi for his new Cabinet, only two are Kurdish.

Abdulwahid said her party, like other Kurdish groups, is against Abadi’s decision “to pick ministers for us. Everywhere in the world, political blocs pick their nominees and they are the ones representing people politically.”

The Kurdish members of parliament who Al-Monitor spoke to said Abadi’s nominees for the ministerial positions will be most likely rejected by parliamentary blocs. They say Abadi now either has to accept “technocratic” individuals put forward by political groups or risk facing a no-confidence motion by the members of parliament.

Amid the newfound Kurdish unity in Baghdad, some politicians are already calling for the unity in Baghdad to be used as an opportunity to mend fences inside the Kurdish house as well.

In a sign of its disgruntlement with the situation back in Iraqi Kurdistan, Gorran has refused to attend meetings of Kurdish blocks held in the Kurdish region and only attends the ones convened in Baghdad.

Ahmed Haji Rashid, a member of parliament from Komal, said calling for Kurdish consensus in Baghdad while imposing a party’s will in Kurdistan can’t continue. He directs the bulk of his criticism at the KDP, which is the dominant party in the Kurdistan Regional Government (KRG).

“Fundamental reforms should be carried out in the political, administrative and economic realms,” Rashid wrote in a post on his public Facebook page. “The KRG needs to be a balanced institution in terms of its participants and the current monopolization needs to end.”

Kurdish sources say Abadi has now authorized the Kurdish blocs to pick three ministers for the new Cabinet on the condition that they are “technocratic” and competent.

If at the time of launching his reform project the prime minister hoped he could capitalize on the deep divisions among Kurdish parties in Iraqi Kurdistan to press ahead with his agenda, he has just achieved the opposite. His Cabinet overhaul efforts have only triggered a strong backlash and united response from the Kurds.

The refusal of Prime Minister Haider al-Abadi, Saturday, to disclose the new nominations for ministerial positions, but in the House of Representatives.

According to sources close to him, for “tomorrow’s Press,” that “many of the political leaders demanded Abadi disclose the names to them before going to a vote in the House, but he promised to hand over the existing parliament finally Sunday evening or Monday morning.”

He added the sources, that “Abadi adopted a set of criteria for the selection of 20 ministers nominated by the relevant participating in the government blocs, and will keep the defense and interior ministers in the new cabinet line-up.”

Prime Minister renews its commitment to providing the reshuffle to the House of Representatives on time http://pmo.iq/press2016/9-4-201602.htm … 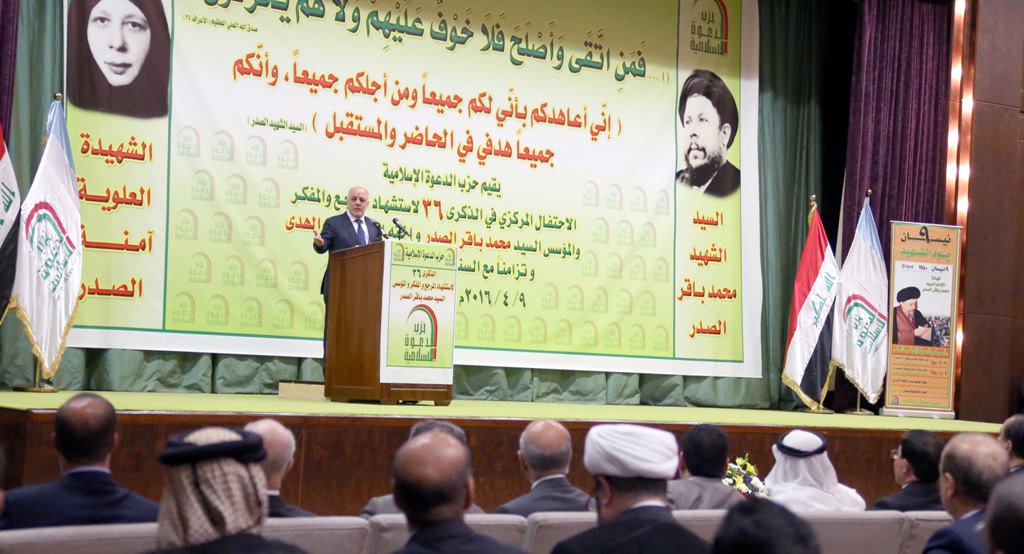 A political source said, ” The old nominations for Ebadi has changed completely, after he becamethe agreement on the nomination of all parties participating in the candidates , the government renewed in accordance with the proposed government of technocrats standards , ” noting that ” themain criteria is the competence and experience and the lack of political affiliation and biographygood.”

The source added, ” The number of ministries will be 22 ministries only, according to the proposed quota in the current government,” adding that “some of the blocks do not have candidates for theministries, and was forced to nominate other functions.”

” The Abadi will present the final list on Sunday morning, to the House of Representatives is expected to vote on Monday.”

Crude oil closed on Saturday, at a height of more than 6%, with output falling by Russia and US stocks.

And ended the World London Brent crude contracts for closer trading session high of $ 2.42 or 6.14 percent to maturity are recorded at the settlement of $ 41.85 a barrel, after having exceeded the level of $ 42 earlier in the session.

The market drew support when Russia, said that oil production declined as he prepares the key oil producers to meet in Doha on the seventeenth of April to freeze production.

She said Baker Hughes oil services company on Friday, said that US energy companies continued to reduce the number of oil rigs for the third consecutive week, which contributes to the support of the fundamentals of the market.

Received Prime Minister Haider al-Abadi, on Saturday, the political blocs nominations for ministerial positions on the basis of variety “technocrats.”

A political source said, for “tomorrow Press”, “The ancient nominations for Ebadi has changed completely, after he became the agreement on the nomination of all parties participating in the candidates, the government renewed in accordance with the proposed government of technocrats standards,” noting that “the main criteria is the competence and experience and the lack of political affiliation and biography good. “

The source, who refused to be named, said “the number of ministries will be 22 ministries only, according to the proposed quota in the current government,” adding that “some of the blocks do not have candidates for the ministries, and was forced to nominate other functions.”

“The Abadi will present the final list on Sunday morning, to the House of Representatives is expected to vote on Monday.”

[Oan- Baghdad]
MP from the Patriotic Union of Kurdistan bloc Ares Abdullah necessity of the participation of the Kurds in thenew federal government, stressing that the Kurds will participate in the new government.
The MP added Ares Abdullah to the site of the Patriotic Union of Kurdistan, said Saturday that “not to attend the US Secretary of State John Kerry to Kurdistan and to invite the delegation province to Baghdad is amessage to the provincial government and its multiple readings.
He explained , ” I believe that Kerry sent a letter to the Kurdistan Regional Government that that the United States will support the Kurds but in the framework of Iraq, and US Secretary of State stressed the need toaddress the outstanding issues between the KRG and the federal government ‘s problems.
he said Abdullah, said that ” the participation of the Kurds in a very important government and no doubt theKurds will participate in the new federal government.”
the US Secretary of State, John Kerry met yesterday in his visit to the capital Baghdad , the Kurdistan Regional government delegation led by Prime Minister Nechirvan Barzani , the US embassy in Baghdad.
and arrived in the provincial delegation yesterday also to Baghdad.
the Prime Minister said Haider al – Abadi, during a meeting with the delegation of the province, that ” in the interest of everyone ‘s survival of Iraq Mahadda and that the cabinet reshuffle does not offend any component. ”
http://www.alliraqnews.com/modules/news/article.php?storyid=35134

, The President of the House of Representatives, Saleem al-Jubouri, said Saturday that the parliament does not vote on the candidates of technocrats, who presented them Prime Minister Haider al-Abadi, without checking their CVs, pointing out not to retreat from the end positions by proxy.

Jubouri said in a speech, on the occasion of the Iraqi martyr, in the presence of the three presidencies, and I followed, “Tomorrow’s Press,” that “we maintain the political process because we are without them we will be in a big mess, and today we are in a severe crisis and to overcome them we impartiality of impulses partisan.”

He added, “We are working on the success of the reshuffle in accordance with the Constitution and the law, but we do not vote on the candidates presented by the Prime Minister Haider al-Abadi, without fully checking their resumes, and on al-Abadi work with us to accomplish this amendment.”

He continued, “The parliament also decided to end positions by proxy, and will not retreat from it,” calling for political blocs to “consult urgently on the completion of the amendment before the voting session.”