Accused the lawmaker Kazem Sayadi, on Friday, political parties Pfdhaa the attack on his office in Wasit province, said the bombing, which he called the incident “despicable” but it is a political offense, not a criminal offense.

It caused an explosion caused by an explosive sound ignite the fire in a car employee lawmaker Kazem Sayadi Office in Wasit province.

The pictures showed the effects of the fire, which broke out in the car in front of Chiaa Attorney’s office in the city of Kut, Wasit Province, without casualties.

And contacted / balances News / MP Kazem Sayadi to comment on the incident, said that “the attack on his office but carried out by political Czb led by terrorist groups.”

“I expect the targeting, but not this way, not this vile.”

He Sayadi, saying “the parties that have done Bastahedava I did that after he exposed their ways through debunking their claims and invalidity Ajraethm, especially after the last video that you filmed inside the parliament.”

He stressed that these parties “using the language of terrorism, as expressed through the work of this criminal,” adding “the political parties have killed democracy in Iraq, a dark room.”

“The crime is not a criminal but a political crime desk targeting carried out by some of the blocks that were damaged its interests by addressing them in parliament.”

“The parties are targeting every vote to express his opinion to reject the quota system.”

Iraqi police in the province said the blast was caused by an explosive sound and placed under a car employee, is not yet known whether the incident was an attack directed against Naimb Sayadi against the backdrop of the last positions in the Iraqi parliament.

US Vice President Joe Biden arrived in the city of Arbil to meet with officials in the Kurdistan region.

US Vice President Joe Biden arrived in Baghdad Sunday evening and met with Prime Minister Haider al – Abadi and Parliament Speaker Salim al – Jubouri , and discussed with them the political and security situation in Iraq , reiterated US support for Iraq in the elimination of Tnzhm Daash.

As President Fouad Biden told infallible phone call because of lack of time of his visit , “he said tour seeking support mainly for the benefit of Iraq politically, economically and militarily, adding that many of the advanced industrial countries are ready to provide assistance to Iraq soon.”

Print this Page Send to friends

[Oan- follow] the
White House said on Thursday that the visit of US Vice President Joe Biden to Iraq to meet with Prime Minister Haider al – Abadi was ” a good sign , ” US support to the Prime Minister in his efforts to unify the country.
The spokesman said the White House Josh Ernest “This is a good sign for continued US support for the efforts of the prime minister to unify Iraq in the face of the organization [Daash].”
US Vice President Joe Biden arrived in Baghdad Sunday evening and met with Prime Minister Haider al – Abadi and Parliament Speaker Salim al – Jubouri and discussed with them the political and security situation in Iraq ,reiterated US support for Iraq in the elimination of Tnzhm Daash. He
also informed Biden President Fuad Masum phone call because of the tight time of his visit , “the tour seeks mainly for the benefit of support Iraq politically, economically and militarily, adding that many of theindustrialized countries advanced is ready to provide assistance to Iraq soon. ”
http://www.alliraqnews.com/modules/news/article.php?storyid=36730 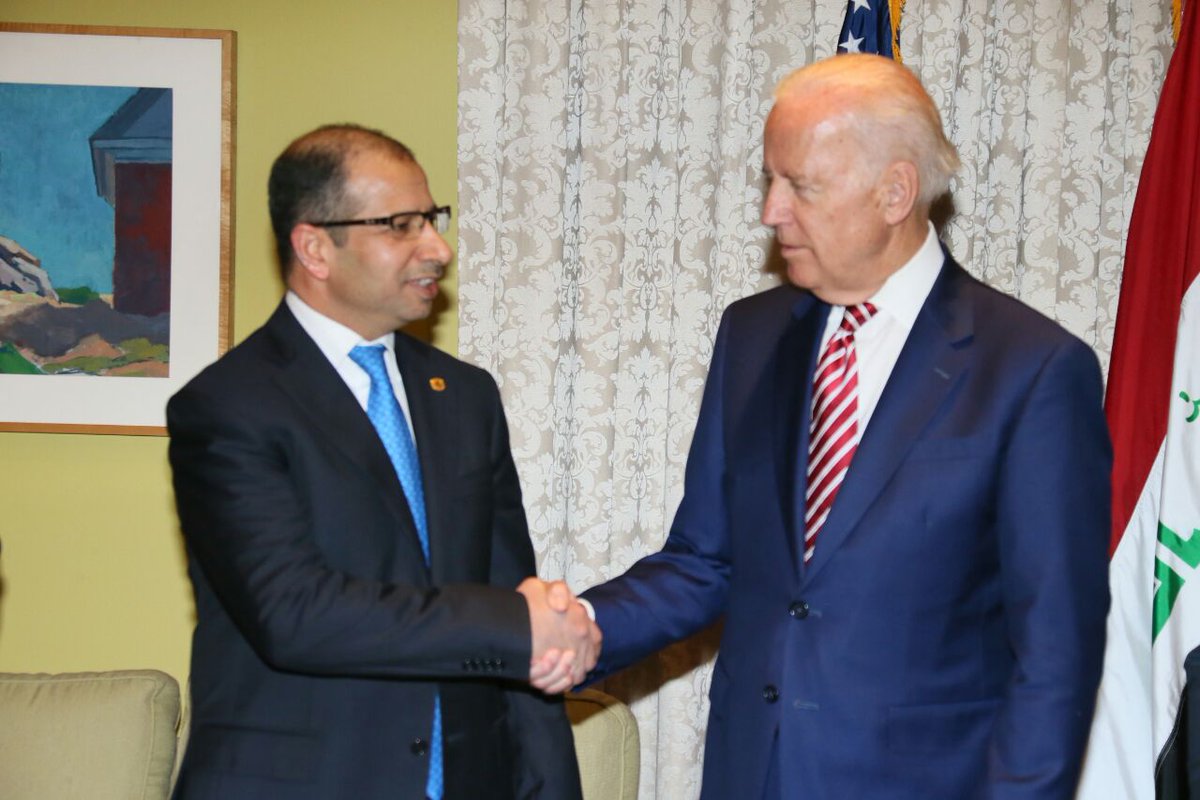 received Mr. Prime Minister , Dr. Haider al – Abadi in his office on Thursday , US Vice President Joe Biden and his accompanying delegation. During the meeting , theydiscussed strengthening relations between the two countries in various fields and developments in the security and economic situation and to support the reforms and the war on Daash terrorist gangs in addition to preparations for the seven major industrialized nations to be held in Japan and the support to be submitted to Iraq. Dr. Abadi that Iraq achieves significant victories over the terrorist gangs and we have the determination and resolve to full liberalization Iraqi territory as we are continuing reforms and move the country to the right path. in turn he praised Mr. Biden substantial progress Iraqi forces in the liberation of the Iraqi lands from thegrip Daash and that the United States supports Iraq fully in the fight against theterrorist gangs. He also stressed the continued support of his country to Iraq to face the challenges that passes by, especially in the financial and economic sphere and the reconstruction of areas that have been edited.

Tuz said Mayor Abdul waterfall, in an interview with (long-Presse), “The general situation in the district of Tuz, (90 km east of Tikrit), are stable after a day on the agreement signed for the return of security to the judiciary.”

He said Abdul, “The shops and restaurants re-opening after closing over the previous days because of the events witnessed by the elimination of security incidents,” he said. “All the roads are open, including the road to Baghdad – Kirkuk.”

He said Abdoul, that “the application of the terms of the agreement signed on Wednesday, came into force today actively, in order to restore security and to address the situation in the judiciary.”

It was at the Council of Salahuddin province member, confirmed on Thursday (April 28, 2016), said the Peshmerga and the crowd forces, preparing to leave to spend Tuz, east of Tikrit, Mrkzmhafezh Salahuddin, (170 km north of Baghdad), in implementation of the agreement yesterday, and while noting that the Ministry of the Interior agreed to adapt the new elements of the people of the judiciary, he said that local police will take over the security file tasks in the judiciary.

The secretary general of the Badr Organization, Hadi al-Amiri, said, on Wednesday, (2016,4,27), to reach an agreement between the leadership of the crowd and the Kurdish leaders that includes taking out the popular crowd forces and the Peshmerga spend Tuz, east of Tikrit, Salahuddin province, (170 km north of Baghdad), starting from tomorrow, Thursday, and pointed out that the local police and emergency forces will take over security duties in the judiciary, said Deputy Chief of the popular crowd Abu Mahdi Mohandes, security will return to the courts during the “next 48 hours.”

The governor of Kirkuk, Najm al-Din Karim stressed, in the (26 April 2016), the clashes between the sides in the conflict stopped in the district of Tuz, east of Tikrit (170 km north of Baghdad), and pointed to the arrest of a number of “agitators”, as revealed visit Expected to Secretary General of the Badr Organization, Hadi al-Amiri to consolidate the ceasefire, called on everyone to “exercise restraint.”

The Mayor tooz district in the province of Salahuddin waterfall Abdoul, had confirmed (25 April 2016), that the road to Baghdad – Kirkuk reopened a day after it closed because of the events that took place in the judiciary, as pointed out that the administration of justice will meet with leaders of the popular crowd and Peshmerga to strengthen security and stability in Tuz.

The Mayor of Tuz, had announced (April 25, 2016), the release of seven truck drivers kidnapped Kurds, stressing that the activities of the judiciary seeks to maintain stability and the return of the situation there to normal.

The Secretary General of the Badr Organization, Hadi al-Ameri, announced in the (24 April 2016), signed an agreement for an immediate cease-fire in the district of Tuz between the popular crowd and the Peshmerga, revealing a future meeting to discuss the truce in the judiciary and to ensure the non-recurrence of the crisis, as he emphasized his intention to approach the President of the Council Minister to consider the victims of the events of the judiciary. “martyrs”, counting that any internal battle “only serve the foreigner.”

A security source in Salahuddin province, reported in (24 April 2016), that 13 people had been killed and wounded in clashes between elements of the popular crowd and the Peshmerga forces in the district of Tuz, east of Tikrit (170 km north of Baghdad), and as he emphasized cutting the road to Baghdad – Kirkuk completely.

And Tuz spend inhabited by Turkmen and Arabs, Kurds, unremitting violence and bombings since 2003 and hit the southern regions and western control (Daash), but the Peshmerga popular crowd re-edited, but tension has existed between them, and no longer displaced to areas liberated from Tuz.

With @VP and PM Abadi in #Baghdad today, reviewed next phases of campaign against #ISIL in #Mosul and #Anbar. 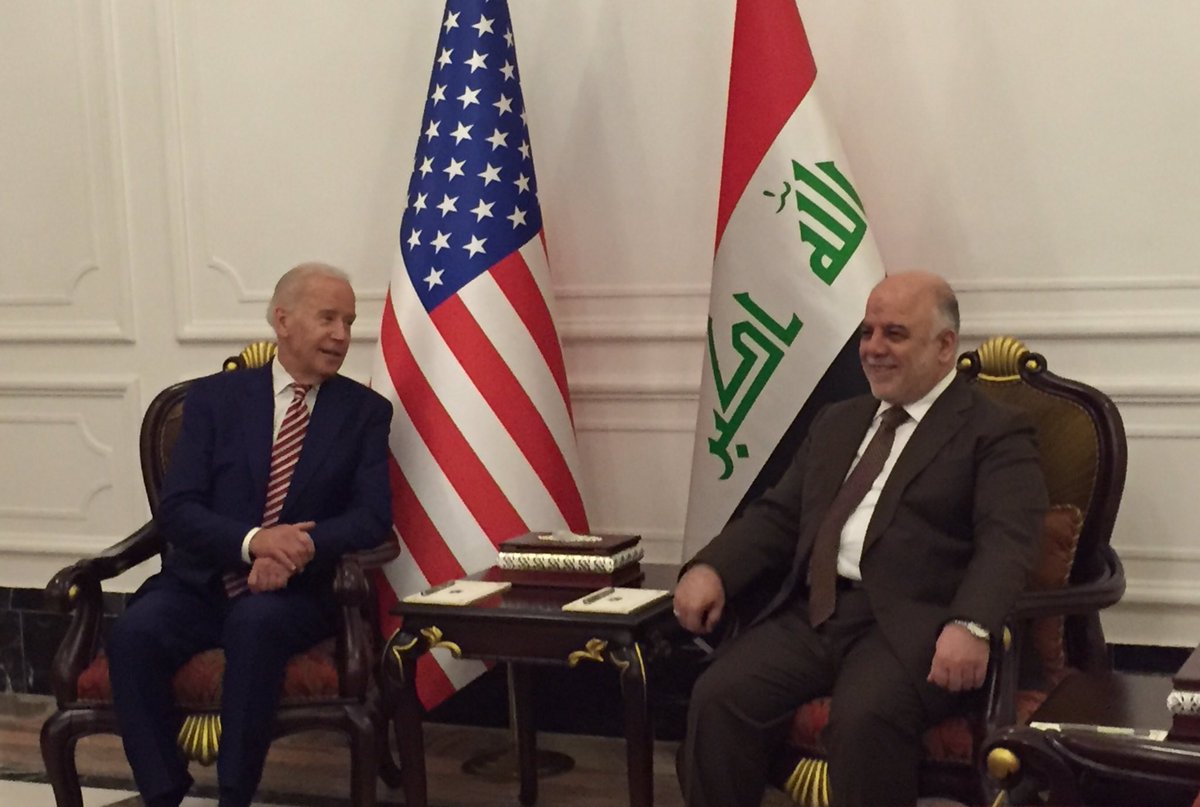