Revealed the parliamentary finance committee member Ahmed Sarhan, Thursday, for attainment of Iraq’s reserves of cash currency of $ 55 billion and amounted to 80 tons of gold.

He said Sirhan’s / balances News /, that “the wealth of Iraq reserves of currency and gold fall year after year gradually, especially the dollar reserves.”

He added that “Iraq’s currency reserves totaled $ 55 billion in the Central Bank of Iraq, while Iraq’s gold reserves amounted to only 80 tons.”

It is said that the central bank revealed, earlier, the bank had a reserve of between 57-61 billion dollars, while stressing that the bank can not lend to the government of the Treasury or the Reserve .anthy 29

The deployment of al-Jubouri, the official page on the social networking site “Facebook” a statement made to one of the Iraqi channels, in which he said that “the security forces of the counter-terrorism apparatus has today denying entry to a senior UN delegation from entering the House of Representatives,” warning of the “popular revolution in if the entry control forces to the parliament hall. “

Jubouri said he “was prevented journalists from entering the House of Representatives as well as the closure of the Department of Information,” adding that “it was cut off the water from us and some electrical appliances as a way to fight us.”

He favored the Iraqi parliament rapporteur Imad Youkhana, a parliament session on Monday or Tuesday of next week.

And MP Imad Youkhana that “it is wrong to give the image of the Iraqi street that the House of Representatives Oppressed Foundation, because the citizen asked parliament to resolve the problems,” noting that “The Council is the legislative body that initiate laws that serve the welfare of the country and the citizens.”

He announced Iraqi Parliament Speaker Salim al-Jubouri, two days ago, and the suspension of the Iraqi Council of Representatives sessions until further notice.

Search Prime Minister Haider al – Abadi with the chairman of the US Joint Chiefs of Staff Gen. Joseph Dnford and his accompanying delegation , who arrived in Baghdad Thursday evening promote armament and air strikes.

A statement by the prime minister ‘s office received by all of Iraq [where] a copy of which the two sides discussed “during the meeting to strengthen military cooperation between the two countries in the fields of training, arming and air strikes and the importance of continuing the momentum of the battles to liberate the rest of the territories.”

He praised Gen. Dnford ” the great development of Iraqi forces and enable them to edit a large number of areas and achieve winning streak on terror Daash gangs. ”

the head of the US joint Chiefs of staff , continued US support for Iraq in its war against terrorism.”

the US Defence Secretary Ashton Carter has visited Monday the capital Baghdad and confirmed the readiness of the United States to meet all requirements the battle requested by the Iraqi government in fighting Daash.

as a senior official at the Pentagon, announced yesterday that it will deploy about 200 additional troops in Iraq and send Apache helicopters for the first time to fight al Daash terrorist, bringing the number of US troops in Iraq to about 4,100 troops.

the President US President Barack Obama on Monday that his country “will continue to support Iraqi forces in eliminating Daash.”

arrived Thursday evening to the capital Baghdad , chairman of the US Joint Chiefs of Staff Gen. Joseph Dnford just days after a visit by US Secretary of Defense Ashton Carter to Bgdad..

Search Finance Minister Hoshyar Zebari , with US Ambassador Stuart Jones and a representative of the US Treasury Department at the US embassy, ​​the government ‘s reform program for the development of the Iraqi economy and the development of its own resources.

The ministry said in Bithan received by all of Iraq [where] a copy of the “Zebari met with Jones and a representative of the US Treasury, and accept them the results of his recent visit to Washington and his participation in the annual meetings of the spring for the International Monetary Fund and the World Bank, as well as the talks between the Iraqi delegation with senior Aldulin officials the US Treasury Secretary and other officials in the administration about support Iraq economically and financially and support in counterterrorism organization Daash terrorist. ”

he added that” during the meeting they exchanged views on the government ‘s reform program for the development of the Iraqi economy and the development of its resources ÇáĐÇĘíĺ technical talks with the IMF for a standby credit agreement which will provide additional resources for the state.

Talabani said in a press conference held in Arbil on the sidelines of the visit that the United States promised to increase its support for the Kurdistan Region and the Peshmerga, pointing out that the region had previously confirmed the participation of the Peshmerga liberalization processes Mosul.
It is said that the Kurdistan region delegation headed by Qubad Talabani, to Washington, which included the Minister Aldalkhalih Karim Sinjari, Minister of Peshmerga agency and Falah Mustafa , head of external relations in the Kurdistan Regional Government.

Greeted Mr. Stuart Jones @ USEmbBaghdad and discuss the political situation and the need to move legal and constitutional steps to resolve the crisis. 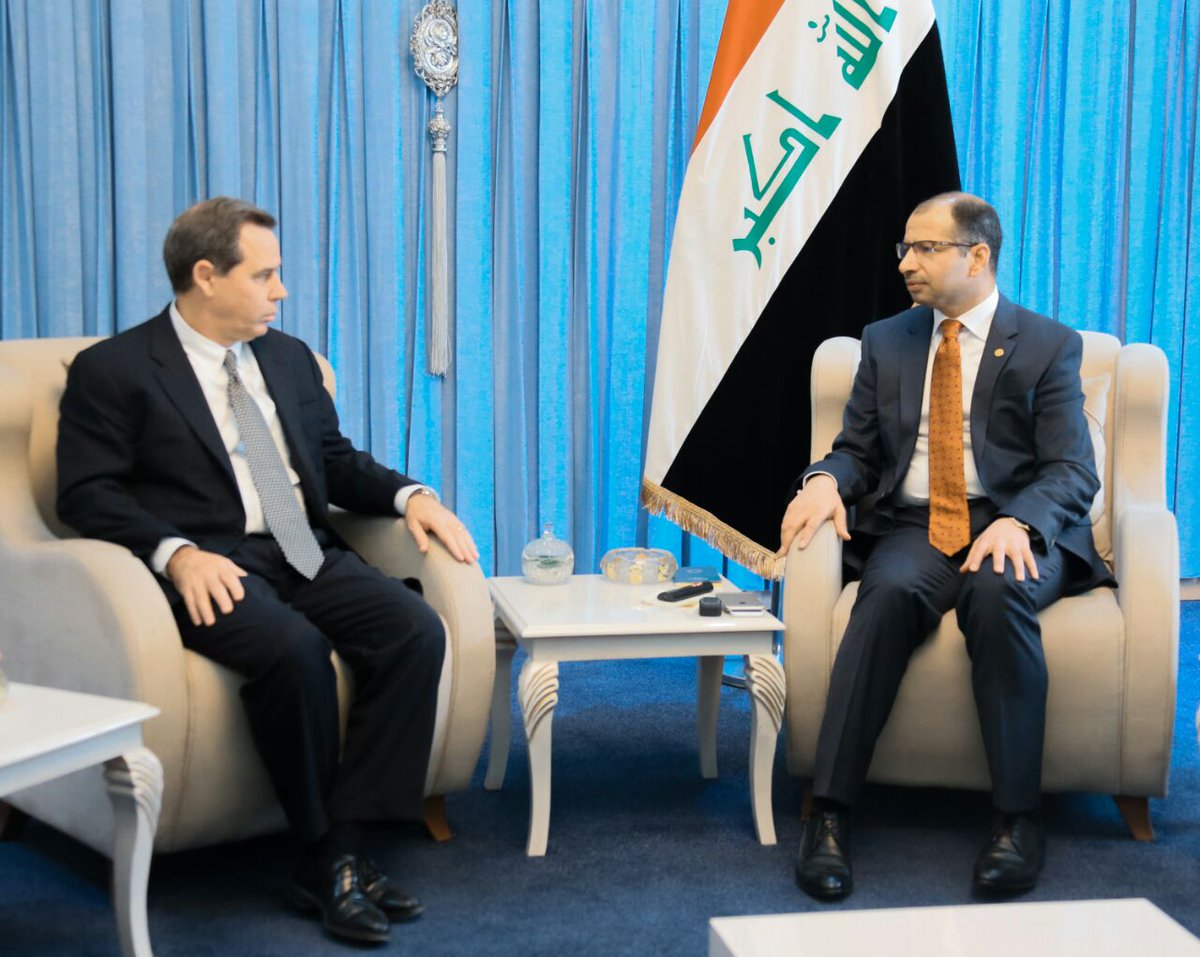 {Baghdad} Euphrates News US President Barack Obama that “the Prime Minister Haider al-Abadi was a good partner for us said, this time is not the time differences.”
The US president said “there is in Baghdad now challenges the Iraqi government isnot based on sectarian differences Shiite Sunni, there are also differences within themasses themselves, and this does not come back to us, and Iran, and the Gulf states, but the Iraqi people, but it is necessary to the stability of Iraq.”
he said Obama was “should the Council of Ministers to be stable, and we have contacts with all Iraqi parties in this regard , ” noting that “there is a challenge to form a new Iraqi government, and we want to make sure that the military our assistance up on time and go to achieve stability.”
he continued saying , “We we encourage the Gulf states to help Iraq in thereconstruction of towns devastated by Daash, and we will continue our support toIraqi forces in the elimination of the terrorist organization, “adding that” Abadi istrying to address Daash, and at the same time reach out to the population a year. ”
He noted , ” we Antdechl in the current political crisis Iraq , “noting , ” we want to engage more in Iraq, and help to bring stability, and have destroyed Daash areas itoccupies, and we have to help the Iraqi government Baammarha. ” Ended h
http://alforatnews.com/modules/news/article.php?storyid=114784