The head of the Republic of Iraq Fuad Masum , a new initiative to resolve the crisis in the House of Representatives is made up of seven points. An extraordinary session includes inaccordance with Article 58 of the Iraqi Constitution. He also called for the convening of acomprehensive session of Parliament in accordance with Article 11, and in accordance with the initiative sitting of the Presidency in the ranks of the members of parliament members, and allows Jabouri delivered a speech to indicate his opinion on the crisis, and asked thedismissal of the Presidium of the parliament and put to the vote.
In the case of the insistence of the Council on dismissal elect a new body, but if rejected itcontinues the Presidium of the parliament to work.

Observer news / Baghdad
Mutassim MP Ali al-Badri, Monday, revealed that the planned meeting held today under the chairmanship of an older MP Adnan al-Janabi, was postponed until tomorrow in order to negotiate with the House of Representatives to hold a comprehensive hearing.
Al-Badri, said that “today’s meeting was postponed to Tuesday after protesters form committees to negotiate with the House of Representatives singly and not within certain blocks in order to hold a comprehensive meeting and election of the new presidency of the parliament.”
He added, “The protesters do not negotiate with the blocks because they came out of the framework of the Presidency of the parties and blocs, but with deputies represent the people in order to mainstream phenomenon on all state institutions and out of the sectarian and partisan quotas and Ketloah and factionalism.”
The MP Almatsamh emotions grace has revealed that the number of attendees of the deputies was 163 deputies, while stressing that the deputies did not hold the meeting because of a number of negotiating blocs.

The source said a representative of the Twilight News, that Huani and House of Representatives of the protesters had entered a meeting to discuss the current crisis.

Huani will present an initiative of the Presidency and obtained Twilight News, a copy of them.

See the text of the initiative:

Huani side of the sit-in protesters with the House of Representatives:

Masum stressed the need to hold a comprehensive meeting , attended byall theblocs in parliament and is headed by one of the members of theCouncil and thesitting members of the Presidency in the ranks of themembers of the House ofRepresentatives.

Masum also stressed the importance of the area to make Saleem al – Jubouri in order to give a speech showing his view of what is happening and howtoovercome the current crisis.

Masum said in his initiative that in the event of Parliament ‘s insistence ontheremoval shall be the election of the new presidency of the Council in the absence of approval of the dismissal , the current Presidency in the exerciseof its functions will continue according to the rules of procedure of the Iraqi parliament.

Masum stressed the need to hold a comprehensive meeting , attended byall the blocs in parliament and is headed by one of the members of theCouncil and the sitting members of the Presidency in the ranks of themembers of the House of Representatives.

Masum also stressed the importance of the area to make Saleem al – Jubouri in order to give a speech showing his view of what is happening and how toovercome the current crisis.

Masum said in his initiative that in the event of Parliament ‘s insistence onthe removal shall be the election of the new presidency of the Council in the absence of approval of the dismissal , the current Presidency in the exerciseof its functions will continue according to the rules of procedure of the Iraqi parliament.

Nassif said in a statement that “the Prime Minister Send MP Ali Keywords envoy to the House of Representatives of the protesters to talk about the dismissal of Salim al-Jubouri, versus maintaining it and providing ministerial cabin and vote on it,” asserting that “the House of Representatives rejected the offer because they want a comprehensive reform,” said Nassif, that “the legal Representatives of the initiative put forward by the President Fuad Masum, which invited the parliament to convene and comes Salim al-Jubouri, deputy and be voted on dismissal and resignation and nominations are open again. “

Jihadists including raising taxes and creating levies including fines for not being able to answer questions on the Koran, say US analysts 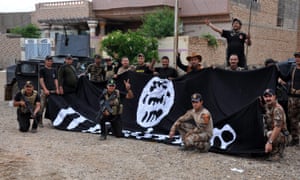 Iraqi soldiers hold an Isis flag after they gained control of the city of Heet in western Iraq after days of fierce clashes. Photograph: Nawras Aamer/EPA

Islamic State’s revenues have dropped about 30% since mid-2015, forcing the group to introduce a range of new taxes, a research group has said.

This was due largely to airstrikes by the US-led coalition and Russia, although IHS warned the decline was only an “interruption of production” because jihadists were able to repair infrastructure quickly.

The report said about 50% of Isis revenues come from taxation and confiscation of businesses and property, with 43% coming from oil.

The remainder is made up of drug smuggling, the sale of electricity and donations, the report said.

“The Islamic State is still a force in the region but this drop in revenue is a significant figure and will increase the challenge for the group to run its territory in the long term,” Carlino said.

IHS said Isis had lost about 22% of its territory in the past 15 months and now ruled over six million people instead of nine million. This meant its tax base had become smaller.

“Our research has found that the Islamic State is increasing taxes on basic services and coming up with new ways to get money from the population.

“These taxes include tolls for truck drivers, fees for anyone installing new or repairing broken satellite dishes, and ‘exit fees’ for anyone trying to leave a city,” Carlino said.

Fines for not being able to answer questions correctly on the Koran have also been introduced and Isis is also taking cash as an alternative to corporal punishment penalties, IHS said.

Since the Syrian conflict erupted in 2011, half of the country’s population has been displaced – including five million who have fled to neighbouring states. More than 270,000 people have been killed.

A truce brokered by Russia and the US in February excludes the fight against the Isis or al-Qaida’s affiliate in Syria.

A US official said, Kerry will meet Iranian counterpart Mohammad Javad Zarif in New York on Tuesday to discuss the implementation of the Iranian nuclear agreement.

And it reached Iran and six world powers to the nuclear deal in July 2015 and allowed to ease some of the sanctions imposed by the United States, the European Union and the United Nations in exchange for Tehran’s agreement to a long-term easing of its nuclear program started.

assured US Secretary of Defense Ashton Carter, the United States is ready to meet all the requirements of the battle required by the Iraqi government.

The words of Carter – who arrived in Baghdad this morning Monday through during a meeting with Defense Minister Khaled al – Obeidi at the headquarters of the ministry.

A statement by the Iraqi Defense Agency has received all of Iraq [where] a copy of it, that al – Obeidi and Carter “discussed in the presence of Army Chief of Staff and his deputies and leaders of weapons and Alsnov and senior officers the ministry nature of military cooperation between Iraq and the United States and the ongoing preparations for the Liberation of Nineveh province , of gangs Daash and terrorist nature of the support needed by Iraqi forces in the field of training and armament. ”

the US Secretary of defense , according to the statement” on his country ‘s readiness to meet all of the battle demands submitted by the Iraqi government and to continue supporting Iraq governments and people in all military areas, and gave greetings on behalf of President Barack Obama , the Iraqi army on successive victories in various cutters operations and spread along the theater of operations. ”

for his part , praised defense Minister Khaled al – Obeidi , ” the role the United States plays America in the fight against terrorism through the air strikes carried out by the dens of terrorism within the international coalition forces as well as its significant role in the training of Iraqi forces. ”

he was a senior official at the Pentagon, announced today that it will deploy about 200 additional troops in Iraq and send Apache helicopters for the first time to fight Daash terrorist organization, bringing the number of US troops in Iraq to about 4,100 troops.