ABOARD AIR FORCE ONE (Reuters) – U.S. President Donald Trump threatened sanctions against Baghdad on Sunday after Iraq’s parliament called on U.S. troops to leave the country, and the president said if troops did leave, Baghdad would have to pay Washington for the cost of the air base there.

“We have a very extraordinarily expensive air base that’s there. It cost billions of dollars to build, long before my time. We’re not leaving unless they pay us back for it,” Trump told reporters on Air Force One.

Trump said that if Iraq asked U.S. forces to leave and it was not done on a friendly basis, “we will charge them sanctions like they’ve never seen before ever. It’ll make Iranian sanctions look somewhat tame.”

Iranian President Hassan Rouhani said on Sunday that the Iraqi parliament’s vote to remove American forces from the country is an important step that will contribute to strengthening security and stability in the region.

Rouhani stressed, during a phone call with the President of the Republic, Barham Salih, that Tehran and Baghdad should stand up to the American hostile measures and Washington’s interference.

The Iranian President stressed that the blood of the commander of the “Quds Force” Qassem Soleimani and Abu Al Mahdi Al Muhandis will lead to new developments in the region and will lead to the strengthening of relations between the Iraqi and Iranian peoples.

He added that Qassem Soleimani made great efforts to ensure the security of Iraq, Iran and the region, and continued: “Without him, Erbil would have fallen on that painful night of the ISIS attack on the city.”

For his part, Saleh said, according to the statement of the Iranian presidency, that Iraq and Iran face difficult conditions and great strife that we hope to get out of with their heads held high thanks to the wise management of the officials of the Islamic Republic so that we can establish security and stability in the region, stressing that the unity and friendship of the Iraqi and Iranian peoples enhance security and stability in the region.

The website of the office of the leader of the Sadrist movement, Muqtada al-Sadr, was hacked on Monday, January 6, 2020.

The penetrator released a picture of the American and Iraqi flags on the website of the Sadr office.

On Sunday, the US State Department expressed its disappointment with the decision of the Iraqi parliament today.

The US State Department said in a statement, “The United States is disappointed at the decision of the Iraqi parliament on the withdrawal of foreign forces, and urges to take into account the importance of relations with Washington and the coalition.” 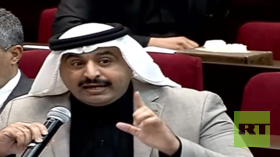 The Iraqi MP, Ahmed Muddoul al-Jarba, today, Sunday, during a parliament session, asked questions of Prime Minister Adel Abdul-Mahdi after the end of his speech in which he recommended ending the American presence in the country.

The Iraqi MP said: Are our neighbors our friends or our masters? .. Will we hand over the capabilities of Iraq to the hands of the neighboring countries?

He added: “Is there a guarantee and ability of the government and security services to maintain security and that criminal gangs will not return to the country’s provinces?”

He continued, “Will we respect and support the security services, or will some parties work to strengthen some factions and make them stronger than the state?”, Noting that these words are directed to all provinces in Iraq and demanded the withdrawal of any faction trying to blackmail the provinces and replace them with military sectors.

He also called for keeping Iraq away from all conflicts and not making it an arena for conflicts and settling international accounts.

He concluded by saying that he wanted guarantees in what was mentioned, and that all decisions that will be issued are for the benefit of all Iraqis in all governorates and not a province without another.

Pompeo said, via “Fox News” channel today, Sunday, that the Iraqi caretaker head, Adel Abdul Mahdi, who asked the House of Representatives to set a timetable for removing all foreign forces from the country, is just “a resigned prime minister” and “acting prime minister.” And “faces massive threats from the leadership of Iran,” he said.

He added: “We are convinced that the Iraqi people want the United States to remain to continue its campaign against terrorism, and we will continue to do everything necessary to ensure America’s security.”

Pompeo declined to respond to a question whether Washington would do it if Iraq, as a sovereign state, asks it to withdraw its forces from its lands, saying: “The American people should know that we will take the right decision, and we will take steps that the previous administration refused to take.”

Minutes after Pompeo’s statement, the House of Representatives approved the government’s mandate to end the presence of foreign forces on the country’s territory. It ended

The head of the Al-Nasr bloc, Adnan Al-Zorfi, Sunday (January 05, 2020), considered that Iraq would lose a useful ally, after the parliament voted on a decision obliging the government to remove foreign forces from Iraq.

Al-Zrafi said in a tweet on his platform on Twitter, that “the removal of (all) foreign forces is a necessity imposed by (the peoples) themselves if the pillars of the state are integrated.”

He added: “An angry people, an independent government and a penetrated political system that does not mean integration, we have not only lost a beneficial ally, but have won an enemy that everyone fears.”

Earlier, the House of Representatives, on Sunday (January 05, 2020), lifted its special session on canceling the security agreement with Washington until next Saturday .

Al-Halbousi said during the session, “The session will be adjourned to next Saturday .”

The House of Representatives voted on the exit of all foreign and American forces from Iraq, the cancellation of the role of the international coalition in Iraq, in addition to canceling the security agreement with America by the Iraqi government

Parliament also voted on the necessity to confine arms to the state .

For his part, the leader of the Sadrist movement, Muqtada al-Sadr, stressed in a message addressed to the parliament on Sunday (January 5, 2020) to cancel the security agreement and immediately close the Washington embassy and bases .

Al-Sadr’s message, which was read by one of the deputies of the Alliance Alliance from within the extraordinary session held in Parliament: And his declaration of hostility to religion and doctrine . ”

He continued: So I announce that the following is not done :

First: Immediately cancel the security agreement and not abide by its prejudicial and humiliating terms

Second: The US embassy of evil is closed immediately

Third: To shut down and expel US bases in a humiliating manner

Fourth: Criminalizing and punishing communication with the US government

Fifth: Supporting the Iraqi army and security forces with a disciplined national resistance to protect the sovereignty, borders, and reputation of Iraq .

What replied to me about the parliament’s decisions was against the American presence .

Sixth: To protect other embassies in Iraq .

Seventh: boycotting American products in Iraq, even more comprehensive than that .

Finally: I invite the Iraqi resistance factions in particular and the factions outside Iraq to an immediate meeting to announce the formation of (international resistance regiments)

Al-Sadr concluded by saying, “If Parliament does not do this, then we have greater behavior .

Groups of Technology University students arrived today, Sunday, to Tahrir Square, in the center of the capital, Baghdad.

A local source said that groups of students from the University of Technology began arriving in Tahrir Square, in the center of the capital, Baghdad.

While hundreds of students from Diwaniyah governorate went out to protests and renewal of student marches to restore the spirit to the Tishreen uprising and emphasize the strike until the fulfillment of the demands.

And protests continue in the southern and central provinces that have risen since last October, in order to change the political process and extract it from the hegemony of the parties and choose a national government away from external dictates.

look at the pictures.. Baghdad / .. Deputy Fayek Sheikh Ali, today, Sunday, described the special session of the House of Representatives on the expulsion of foreign forces as “Teh Bahy.”

Sheikh Ali said in a tweet on Twitter: “The parliament session is now in Iraqi colloquial: So, so!”

And he added, “By legal standards: it means nothing and has no legal or political effect.”

And he explained, “In the political sense: an empty show and empty threats for excited people who call themselves to the world.”

“The humiliating and abusive presence of this important institution continued, to some of the male and female deputies: Baba, thank him!”