“The resurgence of terror and ISIS is a serious threat that will endanger stability and tranquility,” Barzani said.

“Iraq and the Kurdistan Region need the assistance and support of the international coalition to face them.”

Barzani conveyed the importance of the continued collaboration between Iraqi Security Forces, the Peshmerga, and the coalition and warned about the consequences for the disputed areas that could result if that cooperation was threatened.

During the meeting, Barzani and the British delegation also discussed relations between Erbil and Baghdad and ways that the UK can help support both capitals.

ISIS militants continue to be active in and around Kirkuk and the disputed areas, despite its defeat and loss of the territory, and have launched a number of attacks over the last few months. 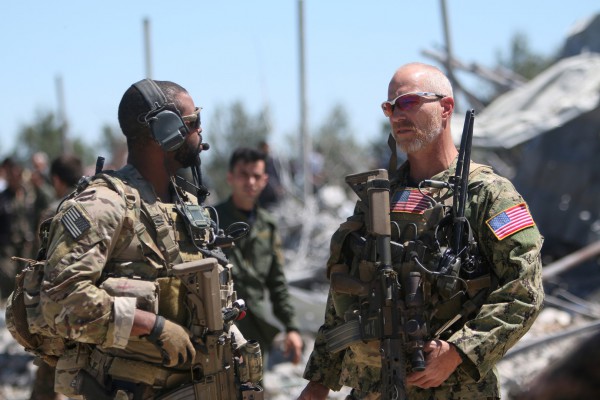 Special- Mawazine News
, member of the Kurdistan Democratic Party, Repin Salam, confirmed on Wednesday that the decision to remove American forces from Iraq failed politically.
Salam said in an interview with (Mawazine News) that “some parties are trying to revive this project through popular demonstrations, and it will also fail.”
He added, “We believe that the millions of demonstrations called by the leader of the Sadrist movement, Muqtada al-Sadr, are a legitimate right, and they are part of expressing opinion, but they are the wrong times because they coincide with the demonstrations demanding reform.” Ended 29 / h

ERBIL – Iraqi caretaker PM Adil Abdul Mahdi said on Wednesday that ousting the US and other foreign forces from the country requires a government “with full authority,” adding that the decision should be left for the future cabinet.

“I request that the president, parliament and political parties nominate a new prime minister, a new government that has full authority because these difficult, complicated circumstances, especially with pulling of the troops … that needs a government with full authority so it can go forward,” he said in a statement, as cited by Asharq al-Awsat.

Abdul Mahdi’s remarks came days after the Iraqi parliament passed a resolution to oust the foreign forces from the country following the killing of an Iranian top commander by the US in Baghdad.

The caretaker premier noted that he was keen on keeping the friendship between Iraq and the US but that it would not change his mind about the withdrawal of the foreign country’s troops from Iraq.

“I am determined to keep our friendships with all. They all helped us, they all sacrificed for us, some with blood, some with financial aid in fighting [the Islamic State group],” he said.

“We also respect the parliament’s decision and we are working on implementing it in the right manner that guarantees Iraq’s sovereignty.”

[International: Al Furat News] Deputy Assistant Secretary of State for Middle East Affairs, Joy Hood, said that the US administration is looking forward to strengthening the relationship of strategic partnership, denying “any talk now about the withdrawal of American forces from Iraq.”

In an interview, Hood called for Iraq to “accelerate the appointment of a strong prime minister who would control security forces and lead Iraq toward prosperity and the strengthening of sovereignty.”

The US official added that “the current time is appropriate for the United States and Iraq to sit together to talk about commitment to strategic partnership at the diplomatic, financial, economic and security levels.”

On Monday, US Secretary of State Mike Pompeo said that all Iraqi leaders had told him on private councils that they supported the US military presence in their country, despite public calls for American soldiers to leave Iraq.

Pompeo added that what he heard during talks with about 50 Iraqi officials, since the beginning of this month, contradicts what they publicly announce, stressing that they all welcome the American campaign to combat terrorism.

The Iraqi parliament had voted on a resolution calling for an end to the presence of foreign forces in the country, after the air strike in which the commander of the Quds Force in the Iranian Revolutionary Guard, Qassem Soleimani, and the deputy head of the Popular Mobilization, Abu Mahdi al-Muhandis, were killed on the third of this month.

{Baghdad: Al Furat News} The three presidencies, in a meeting today in the Peace Palace, stressed the preservation and maintenance of security and money for Iraq.

A presidential statement, received by the Al Furat News Agency, received a copy of it.

He added, “The importance of accelerating the formation of the new government and meeting the requirements of reform at various political, economic and service levels was emphasized, in a manner that preserves the sovereignty of Iraq and the security of Iraqis from the challenges of terrorism until achieving the victory achieved.”

The meeting also focused on “the necessity of taking into account the concern for national sovereignty and preserving it from external interference and preventing excesses in this regard.”

Iyad Allawi, head of the National Coalition, confirmed today, Wednesday, that the caretaker government has no powers to evacuate foreign forces from Iraq.

Allawi said, in a tweet on his “Twitter”: “The evacuation of foreign forces from Iraq is not within the powers of the caretaker government, as well as the parliament, which has become unrepresented with the people and their aspirations.”

He added: “We are surprised to ignore the accountability and control of the government by Parliament and the monitoring of mechanisms for implementing the rules of military engagement.”

Baghdad / Obelisk: Wednesday, 15 January 2020, the head of the caretaker government, Adel Abdul-Mahdi, considered closing schools and imposing a certain opinion that it was illegal, while stressing that his government would not accept any weapons outside the framework of the state.

Abdel-Mahdi said, in the regular cabinet session, in the presence of the governors, that “closing schools is illegal and whoever demands rights must abide by the law,” noting that “the system must return and there is a response from societal classes to achieve this goal.”

He added: “Everyone must respect the laws and there is no success for any claims to rights if you do not abide by the law and the constitution.”

He believed that “the situation at home is complicated and the demonstrations have left positive and negative effects,” stressing that “Iraq is still strong and the crises can be overcome.”

He pointed out the importance of adopting “the most appropriate ways to return as much of the system as possible to the country,” calling for “an acceleration of the process of naming a new prime minister and forming a government with full powers.”

While noting that “whoever claims rights must abide by the law and must be respected by all,” he pointed out that “any weakening of the government is weakening the country.”

He continued: “We have established better relations with the outside since the establishment of the Iraqi state in 1920.”

{Baghdad: Al Furat News} The head of the State of Law coalition, Nuri al-Maliki, received in his office today two separate meetings, the ambassadors of the United States and France to Iraq.

A statement issued by his office, which was received by the {Euphrates News Agency}, said that “during the meeting, they discussed the latest developments in the political situation and the repercussions of the crisis in the region following the American-Iranian conflict.”

Al-Maliki stressed that “Iraq seeks to enhance its relations with all countries of the world on the basis of mutual respect and cooperation in various fields.”

The Head of the State of Law Coalition stressed “the need to work to avoid escalation and the pursuit of all states, especially European countries, in turn to support Iraq, defuse crises and spare the world conflicts and wars.”

For his part, the two ambassadors expressed their interest in the Iraqi situation, the need to calm and keep it away from conflicts, and respect its sovereignty and territorial integrity.

The resigned Prime Minister Adel Abdul-Mahdi discussed, Wednesday, with the ambassadors of Canada, Australia and Russia in Iraq, the parliament’s decision regarding the withdrawal of foreign forces from Iraq.

The media office of the Prime Minister stated, in a statement today, that Abdul-Mahdi received the ambassadors of Canada, Australia and Russia, at their request, separately, as the meetings dealt with bilateral relations and joint files, discussing the regional crisis, calm efforts, preventing escalation, and sparing any possible repercussions of the crisis.

The statement added that “Abdul-Mahdi also discussed with the ambassadors the House of Representatives decision to withdraw foreign forces from Iraq and cooperate against terrorism, and to continue consulting and communicating on developments in the situation.”

He continued, “Abdul-Mahdi, valued the positions of friendly countries in support of Iraq’s security and stability and confirmed the continuation of cooperation against terrorism,” indicating the existence of common trends towards calm and the removal of the risks of tension and military conflicts from the region and focus efforts to combat ISIS.

He explained that “the Prime Minister pointed to the efforts of the government to preserve the country’s security and national sovereignty and not to turn it into an arena for international conflicts, and to confirm Iraq’s keenness to establish and strengthen the best relations with all, and that it be a point of harmony and peace in its Arab, regional and international surroundings.” 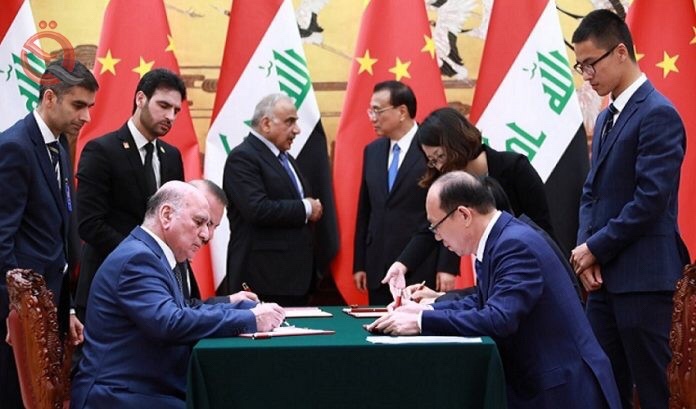 A senior adviser to the Iraqi government for financial and economic affairs, and one of the negotiators in the Iraqi-Chinese agreements, the appearance of Mohammed Saleh, on Wednesday, that the China agreement does not mortgage Iraqi oil for many years as rumored, as to the possibility of canceling it at any time Iraq wants.
Saleh said in an interview with “Al Arabi Al Jadeed” newspaper and seen by “The Economy News”, “The agreement between China and Iraq is technical, and we are surprised by the chaos of the current analyzes of economists and politicians alike. We know that an agreement with a country like China is a strong competitor to the United States in Iraq raises Controversy also, but this does not mean that it is politicized.
Saleh added that “the agreement includes allocating export revenues of 100 thousand barrels of Iraq’s total daily exports to China, which amount to about 850 thousand barrels, for reconstruction projects, which is the beginning of the entry of Chinese companies in the reconstruction of dilapidated infrastructure.”
He continued, “All oil revenues go to the operational budget, while this is an opportunity to allocate a portion of the revenues well to reconstruction and construction.” He stressed that “the issue of mortgaging Iraqi oil for many years, as some warn and heard about the past two days, is incorrect, there is a clause in the agreement that enables Cancel it any time you want, it is an aid agreement from China as a friendly country to Iraq.
He considered that “there are no fears of any US economic or other sanctions, in light of the application of this agreement, because the American side has nothing to do with this file, and we have not heard that there are American objections or warnings about the agreement or its application,” noting that “there is an intention in The future, if Chinese projects succeed, is to allocate 300,000 barrels of oil a day for reconstruction projects, instead of the current 100,000 barrels.