Baghdad / Al-Ikhbaria:
The Civil Defense Directorate announced, on Monday, that it was able to extinguish caravans in a camp for the crowd in Baghdad.
The directorate said in a statement received by “Al-Akhbariya” that “the Civil Defense Center in Al-Bayaa, led by First Lieutenant Muhammad Saleh and Basnad, from device 22 managed to extinguish a fire accident at Saqr base inside a 4 x 6 meter caravan constructed of sandwich material, using an apartment used by the crowd.” .
“it was cordoned off the fire and non – proliferation incident adjacent to the caravans , ” he said, adding that ” the incident did not result in the registration of any casualties.”
http://www.ikhnews.com/index.php?page=article&id=207993
Advertisement Baghdad / Al-Akhbariyah:
The former adviser to the International Alliance, Kazem Al-Waeli, suggested, on Monday, that the United States of America liquidate the leader of the armed group that attacked the American embassy in Baghdad.
Al-Waeli said in a televised statement, followed by “Al-Akhbaria”, that “the missile attack on the American embassy came from an area that includes the homes of the leaders of the armed factions and will be dealt with after the completion of the investigation.”
He added, “Wounding an American citizen during the attack will increase America’s insistence to respond appropriately after the completion of the investigation.”
He continued, “America is awaiting the completion of the investigation and will respond with drones, assassinate leaders of armed factions, and impose a siege on all faction leaders, if necessary.”
http://www.ikhnews.com/index.php?page=article&id=207988

“The Secretary underlined once again that these attacks demonstrate a wanton disregard for Iraqi sovereignty and a failure to rein in these dangerous armed groups,” State Department spokeswoman Morgan Ortagus said in a statement. 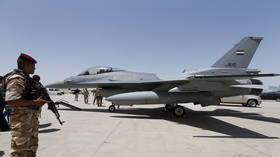 The halt to deliveries affects Iraqi F-16 fighter jets, shown at Balad air base in this July 20, 2015 file photo. ©  REUTERS/Thaier Al-Sudani
All US deliveries of weapons and ammunition to Iraqi security forces have been suspended, amid rising tensions over US presence in Iraq that followed the drone assassination of Iranian General Qasem Soleimani in Baghdad.

The halt includes the US Air Force’s program of supplying parts and missiles to Iraq’s fleet of F-16 fighter-bombers, the news portal Inside Defense reported on Monday. Deliveries will begin again “when the environment in Iraq is safe enough to resume,” USAF spokesman Brian Brackens told Inside Defense in an email.

The last shipment was made Nov 14. The $1.8 billion deal signed in May 2016 provided Sidewinder missiles, Maverick missiles & other weapons to Iraq. Unclear how many have been delivered and how many left to go. https://twitter.com/TonyBertuca/status/1221901294673301504 …

Brackens is the spokesman for USAF’s Life Cycle Management Center, a procurement and logistics organization based at the Wright-Patterson AFB near Dayton, Ohio.

A contract to supply Iraq with $1.8 billion worth of weapons, including the air-to-air Sidewinder and ground-attack Maverick missiles, was signed in May 2016. The last delivery before the halt was made on November 14, according to the subscription-only portal, which says it specializes in news about Pentagon programs, procurement and policy-making.

Iraqi armed forces were rebuilt around US weapons and doctrines after the 2003 invasion and occupation by the US-led coalition. They proved woefully inadequate when facing Islamic State (IS, formerly ISIS) terrorists in 2014, but have since managed to liberate most of Iraq from the group’s control, though with thousands of US troops in “advise and assist” capacity.

Just last week, the Iraqi defense ministry posted a video of an air strike by its F-16s against IS targets in the Hamrin Mountains.

#Breaking: Just in – Two Iraqi airforce members from have taken of from the Balad Airbase very early this morning, bombing a training camp of #ISIS in the Hamrin Mountains with 2 F-16 fighter jets. #Iraq #Terrorism 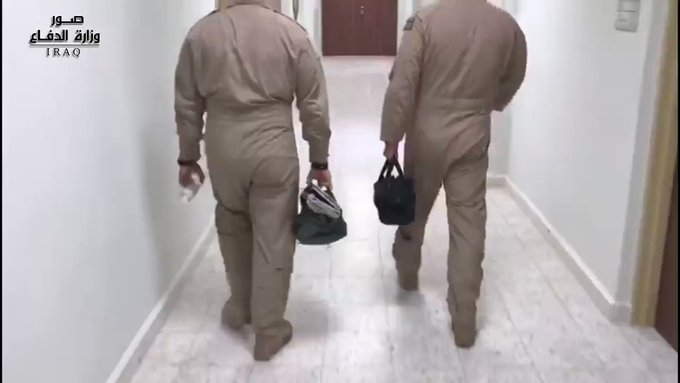 Continued US presence in Iraq has come into question over the past month, however, following the January 3 drone strike outside the Baghdad international airport that killed General Qassem Soleimani, head of the Quds Force of Iran’s Islamic Revolutionary Guard Corps. While the US considers the IRGC a terrorist organization, Soleimani was a key figure in the program that supported Shia militias in Iraq and Syria against IS.

After Soleimani’s killing, the Iraqi parliament adopted a resolution demanding that US troops leave the country. Washington has flat-out refused.

In the meantime, Iran launched ballistic missiles at two US bases in Iraq in retaliation for Soleimani’s killing. Officially, no US or Iraqi troops died in the January 8 strikes. While initial reports denied any injuries either, some three dozen US troops have since been referred to hospitals for concussions and other traumatic brain injuries.“There are no plans by the US military to withdraw from Iraq,” Assistant to the Secretary of Defense Jonathan Rath Hoffman told reporters at a press briefing earlier this month, adding that “the consensus in Iraq seems to be that the United States forces there are a force for good,” even though the parliament’s resolution suggests the exact opposite.

{Baghdad: Al Furat News} Today, Speaker of Parliament Muhammad Al-Halbousi called on political forces to cooperate in the formation of the government, and expedite the selection of a candidate that matches the aspirations of the Iraqi people.

Al-Halbousi said in a statement that the {Euphrates News Agency} received a copy of it that “choosing a strong new government backed by political forces to set a clear strategic vision to implement the reform steps and be able to meet the demands comes as an important step to solve the current crisis in the country.”

He pointed out that “there are still young people in the demonstration arenas demanding reform, and we must listen to and respond to their true demands after unification, and deal with them wisely. They are our children and the state has a duty to provide a free and dignified life for all of the Iraqi people.”

He added, “Attacking public and private money, blocking roads, and permanently disrupting it is in the public interest, and offends peaceful demonstrators and their goals to achieve reform, and our young people must remove vandals from their ranks and maintain the peaceful demonstrations.”

The speaker of the Council of Representatives also condemned the continued bloodshed among the demonstrators and the security forces, and the repeated attacks, without revealing their reasons and the parties behind them. is over

Shafaq News / Member of the House of Representatives Faik Sheikh Ali revealed today, Monday, a “major operation” for the international coalition in Iraq.

“There are a lot of idiots (donkeys) in the world of politics, but there are no stupid and red people from the ruling militias in Iraq,” Sheikh Ali said on Twitter.

He added that “Iran surrenders to the international community, and the countries of the free world issue a statement condemning their crimes and violations, the international coalition is preparing for a major operation in Iraq, and the Jay-Ventis militias are like a mouse!”

Baghdad / .. Today, Monday, the MP for the al-Hikma Movement, Hassan Khalati, announced the date of the announcement of the nomination of the new prime minister, by President Barham Salih.

Khallati said, “Eye of Iraq News”, “The political forces have agreed with the President of the Republic, Barham Salih, to resolve the selection of the new prime minister, and to announce a mandate during the current week, and we may witness you during the next two days.”

And that “Iraq is going through a period of serious and consecutive crises, and this matter requires the presence of a government with full powers, and for this it was agreed to resolve this file during the current week.”

Baghdad / Obelisk: The Saireon Alliance expressed, on Monday, its rejection of the excesses of Sheikh Ali Ali Ali al-Fateh leader Hadi al-Amiri, while noting that the difference in political views does not call for the use of convulsive speeches.

“We look with respect and love for the militant national figures who stood with Iraq in its war against ISIS terrorist gangs,” the coalition said in a statement, expressing its strong rejection of the excesses of Sheikh Ali against Hadi al-Amiri, the head of the Fatah coalition, and his use of blunt words and far phrases On the political contexts, social fitness, and moral foundations of Iraqi society. ”

The coalition called on Sheikh Ali to “respect the legal procedures followed by al-Amiri in his complaint, which is a context that encourages everyone to rely on state institutions,” noting that “differences in political views do not require the use of convulsive speeches with others, but joint action and calm language is the path that should be judged To him to spare Iraq the evil of strife and conflicts. ”

{Baghdad: Al Furat News} Today and yesterday night there witnessed rapid developments in the issue of the candidate of the next prime minister, as the chances of some began to fade and some of them weakened a lot and in return the emergence of other candidates.

A well-informed political source told Al-Furat News, “The President of the Republic, Barham Salih, is likely to settle his assignment to the candidate for prime minister at the beginning of next week,” stressing that “Saleh resumed his talks yesterday and upon his return from traveling abroad, and made extensive contacts that will continue until the file is resolved.”

“The president of the republic is scheduled to meet tomorrow, Tuesday, with representatives of the demonstrators to discuss the file of the next prime minister’s candidate and the conditions that must be met,” he added.

The source pointed out that “the list of candidates has undergone changes as some of the proposed names have lost their chances while other names have weakened a lot, and in the meantime new names have emerged as candidates for the site adopted by certain alliances.”

He continued, “The movement in this regard is progressive and was scheduled to be resolved next Thursday, but the weightings indicate that the settlement will be early next week.”

Faced with the pressure of the Iraqi street, the political parties are still unable to reach a solution to the crisis of choosing an alternative for the resigned prime minister, Adel Abdul Mahdi, after failing to assign several candidates after a large popular rejection of him.

The popular demonstrations and sit-ins continue in Tahrir Square in Baghdad and other governorates, with the number of martyrs rising to more than 600 demonstrators and injuring thousands of others.

During the call, according to the media office statement of Abdul-Mahdi, from whom the {Al Furat News} received a copy, “they emphasized friendship between the two countries and condemned the attacks that targeted the American embassy in Baghdad, strengthened the procedures of the Iraqi forces responsible for their protection, and followed up investigations and procedures to prevent attacks on diplomatic missions And bring its perpetrators to justice. ”

The Prime Minister stressed “the importance of calm in the region and respect for all of the sovereignty and decisions of Iraq and non-interference in its internal affairs and make constructive and serious efforts to achieve this.”

The US Secretary of State stressed, “His country’s readiness to conduct serious discussions on the presence of foreign forces in Iraq and cooperation to achieve Iraqi sovereignty.” is over