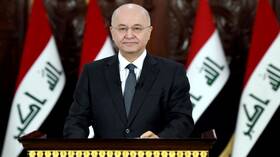 The faction of the “Hezbollah Brigades” in Iraq today threatened Iraqi President Barham Saleh with “expulsion from Baghdad”, in the event that US President Donald Trump met during the work of the “Davos” forum in Switzerland.

The security official in the Phalanges Abu Ali Al-Askari posted a tweet on Twitter, in which he wrote: “We stress the necessity of Barham Saleh’s commitment not to meet with the foolish Trump and the group of killers accompanying him.”

He added: “Otherwise, there will be a position of the Iraqis towards him, for violating the will of the people, and ignoring the fine blood that this gang spilled, and we will say then, neither welcome nor easy for you, and the free people of our children will drive him from Baghdad with dignity and pride.”

And Iraqi President Barham Saleh left today, Tuesday, to attend the “Davos” economic conference in Switzerland, where a number of world leaders, including US President Donald Trump, are scheduled to meet on the sidelines of the conference to discuss bilateral relations. Iraqi political expert Wathiq Al-Hashemi stressed on Tuesday the importance of President Barham Salih meeting with US President Donald Trump on the sidelines of the Davos conference in Switzerland.

Al-Hashemi told Al-Akhbaria that the visit of the President of the Republic to Switzerland is very important, especially at the present time, because Iraq needs to communicate with the outside world in light of the pressures and significant interference in its affairs.

He added: “Saleh’s meeting with Trump is very important in light of the American escalation on Iraqi soil, as well as more important issues that Saleh will discuss during his visit.”

The expert Hashemi said: “Saleh will return next Thursday to Iraq, in order to resolve the prime minister’s file.”

It should be noted that an informed source in the Presidency Court said earlier today, in a statement to Al-Akhbariya, that the President of the Republic left for Switzerland to attend the Davos International Conference, after it was not possible to agree on the selection of a new Prime Minister during the meetings held today.

President of the Republic Barham Salih headed to Switzerland on Tuesday evening to participate in the Davos Economic Forum, which started this morning.

A source in the Prime Minister said, “President Saleh went to Switzerland to participate in the Davos Economic Forum.”

A well-informed political source indicated that “Saleh left after the agreement stumbled again to name a new prime minister because the political blocs did not agree on a particular candidate.”

The Independent / Follow-up / – Muhammad Tawfiq Allawi, the candidate for the position of the next Prime Minister, denied that he was subjected to pressures, dictates or conditions by the political blocs, stressing that what was circulated from the tweet confirms his rejection of the nomination, as it was fabricated and fabricated altogether and in detail.

Allawi said in a tweet on the micro-blogging site “Twitter” followed by “Al-Mustaqilla” today, Tuesday, a fabricated tweet was added in addition to a fabricated article under the title (What happened on the night of commissioning) and it was widely reported that Muhammad Allawi refused his candidacy due to the dictates of some political parties; To confirm that this tweet and this article are fabricated and completely fabricated.

Allawi stressed in a second tweet, that no one has yet dictated any dictates or conditions; knowing that I stressed that I would not accept in the case of assigning me ministers according to the political quotas like the previous governments that ended in failure and brought the country to this miserable state.

Baghdad / Obelisk: An informed political source confirmed, Tuesday, January 21, 2020, that the President of the Kurdistan Region, Nechirvan Barzani, will discuss during his meeting with US President Donald Trump the issue of his country’s forces inside the region.

The source said, “Barzani will focus on Kurdistan urgently needing the presence of American forces to protect the region from dangers, and also the region must remain a neutral region away from conflicts.”

And Nechirvan Barzani is seeking to ignore the parliament’s decision to remove foreign forces from the country, during his meeting with Trump, to focus on keeping US forces in Kurdistan to protect their own interests away from the directions of the federal government.

He added, “The president of the region will focus on the Kurds welcoming the American presence, and they want to continuously support and train the Peshmerga forces,” noting that “the region is a safe area far from Turkish and Iranian interference, and American forces continue to exist, while accelerating the building of military bases within the region.”

The Presidency of the Kurdistan Region stated in a statement that, beginning on Tuesday, Nigerian Barzani will hold meetings with the President of the United States of America Donald Trump, and a number of leaders and leaders of countries, on the sidelines of the Davos Conference on Economy and Security to be held in Switzerland.

The Cabinet decided to empower the Prime Minister to “approve and accompany the accompanying proposals to amend the general census of the population.”

And it was agreed to “amend paragraph (6) of Cabinet Resolution (340 of 2019) to become according to the following: 900,000 nine hundred thousand unemployed persons who do not have the ability to work monthly grant 175,000 dinars only a hundred and seventy five thousand dinars per person for a period of three months provided To be within the poverty line stipulated in the Social Protection Law. ”

The Cabinet agreed to “terminate the work of the ministerial committee composed according to Cabinet Resolution No. (361 of 2016) regarding the mechanism for appointing deputy ministers and general managers for the existence of a committee composed for the same purpose under the Diwaniya Order (199) issued under the letter of the Prime Minister’s Office.”

It was agreed that “the Ministry of Labor and Social Affairs will hand over the marketing complexes and kiosks after its establishment to the Baghdad Municipality in connection with the Baghdad governorate for the purpose of implementing paragraph (9) of Cabinet Resolution No. (340 of 2019) regarding employment of the unemployed, and will assume the management of municipalities in governorates other than Regular in the region, the implementation of the paragraph (first) above, this decision is implemented from the date of its issuance.

The Council agreed to “amend the second paragraph of the Council of Ministers Resolution No. 140 of 2019 to become the following: The Ministry of Youth and Sports shall determine the appropriate mechanisms to provide the governmental financial grant directly to sports federations, with the abolition of the fourth paragraph of the aforementioned decision.” is over

BAGHDAD / … Member of the al-Hikma stream, Muhammad Husam, confirmed on Tuesday that the postponement of the mandate of the new prime minister by President Barham Salih yesterday came due to the ongoing political struggle over the so-called electoral benefits.

Hussam told “Eye of Iraq News” that “the issue of assigning the new prime minister has been postponed from yesterday, Monday to Tuesday, and we hope that things will go this day,” noting that “the political blocs are still putting objections and” veto “in front of some personalities And the names because there are differences between these personalities and their interests, in continuation of the narrow political and party interests approach, with great regret.

The head of the “Bayraq al-Khair” bloc, Muhammad al-Khalidi, announced yesterday, Monday, that the President of the Republic, Barham Salih, will appoint a candidate on Monday evening to form a new government. Finished 2

The International Monetary Fund reduced its forecast for global growth in 2020 slightly to 3.3% due to the absence of indications of an economic recovery, but the rate remains better than last year, which witnessed the worst rate of growth since the global financial crisis at 2.9%.

The British Independent newspaper revealed today, Tuesday, a directive issued by the office of the Supreme Religious Reference, Mr. Ali Sistani, in Najaf, to his followers, followers and offices, to avoid participating in the upcoming Sadrist demonstrations.

The newspaper, quoting its political sources, said, “The office of the Supreme Shiite cleric in Iraq, Ali Sistani, directed followers and imitators to avoid participating in the demonstration called by the leader of the Sadrist movement, Muqtada al-Sadr, in Baghdad on Friday, January 24 (January).”

She added: “Sistani is following the new Iranian escalation against the United States with concern, and is afraid that it will lead to a disturbance of the balance that contributes to preserving the country’s fragile stability.”

She explained: “Al-Sistani’s office asked the branch offices in Baghdad and the provinces to avoid promoting the demonstration called by Al-Sadr, given the latter’s approach to Iran’s circle of allies, despite his continuous emphasis on the independence of his political decision.”

The newspaper concluded, according to its sources: “Sistani did not stop at this point. Rather, he directed one of his main offices in Karbala to support the escalation chosen by the Iraqi protesters since the beginning of the week, after their deadline set by the political parties to form the new government ended.”

It is noteworthy that the leader of the Sadrist movement, Muqtada Al-Sadr, had called in a tweet a few days ago for millions of demonstrations in Baghdad condemning the American presence in Iraq.

While Al-Sadr’s call for demonstrations was met with quick responses by the armed factions loyal to Iran and affiliated with the Popular Mobilization Brigade, because the demonstrations serve the interests of these factions and Iran by removing the first opponent of them from the Iraqi territories represented by the American military forces, especially after the assassinations of the Iranian Quds Force commander Qassem Soleimani And deputy head of the crowd, Abu Mahdi Al-Muhandis, near Baghdad Airport, in addition to bombing camps belonging to the Iraqi Hezbollah Brigades in the district of Al-Qaim in Anbar Province.