Iraqi money market live in the present state of instability was the collapse of the market rate of the dinar, which amounted to 1340 dinars to the US dollar while the official price of about 1190 dinars to the dollar, although the size of the reserve is still great, which is considered a key factor in the stability of the currency.

The reason is due to this difference between the two prices to enter ministries (Finance) and other parties (House of Representatives) and Amlaihm policies and terms were not unrelated to monetary policy, and not the central bank’s ability to defend his advisers about the bank by law.

We welcome & support together with @UNIraq today’s return of families to #Tikrit one year after its seizure by #ISIL. 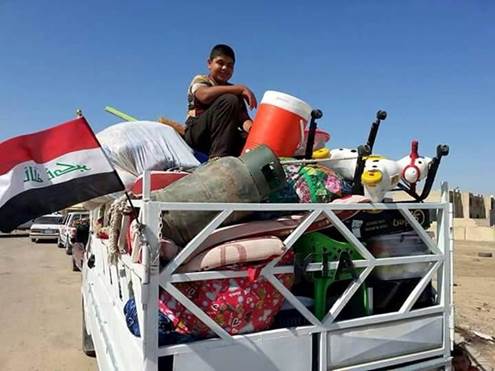 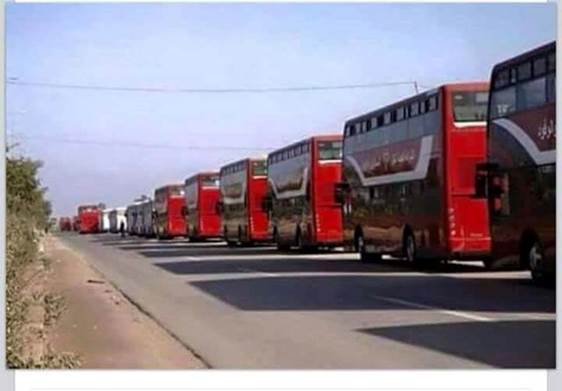 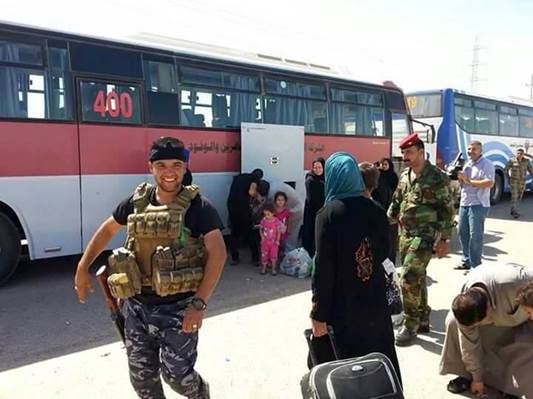 A statement by the command of operations and Euphrates News Agency {} received a copy of it today that “the Baghdad Operations Command will hold a press conference tomorrow at the headquarters at 12 noon.”

She said that he “will be displayed confessions number of bands as well as the security plan for Ramadan” .anthy address
http://translate.googleusercontent.com/translate_c?depth=1&hl=en&prev=search&rurl=translate.google.com&sl=ar&u=http://www.faceiraq.com/inews.php%3Fid%3D3914998&usg=ALkJrhiFuZB7pDR5LY6mgieV9VOI-MBBUw

Announced the official spokesman of the Volcano Room operations Euphrates, Shirvan Darwish, in a statement to the media network Roudao, that the joint forces composed of units protect the people and a number of the free army factions, seized control of the entire city of Tel white rural northern province of Raqqa.

Joint Operations Command announced, Monday, that the liberation of the city of Ramadi operations going according to plan and bite off the ground towards three axes, while confirming the presence of significant progress in the vine spend.

A spokesman for the joint operations Brigadier General Saad Maan, “The liberalization of Anbar province and the city of Ramadi operations are still ongoing,” adding that “there is significant progress in the district of the vine and thwart repeated attempts to re-Daash land grab”.

Maan said that “the military operations going according to plan and bite off the ground towards three axes around the city of Ramadi.”

The Deputy Prime Minister said Bahaa al-Araji, earlier on Monday, the signs of victory are evident and clear and the ground prepared for what awaited by the people of Iraq, stressing that the enemy is suffering from weakness and refraction could be crushed at all levels.

He met with President of the Kurdistan region, Massoud Barzani, on Monday, during his visit to the Gulf States, with Emirates Crown Prince of the Emirate of Abu Dhabi Sheikh Mohammed bin Zayed, to discuss political and security issues in Iraq and the region.

The statement added that the two sides also humanity to situations of displaced people who have left their homes and their areas because of threats of violence and murder of organizing Daash search.

It is noteworthy that the facilities for the President of the Region delegation included both the Security Council adviser in the province delighted Barzani, the head of the Presidium of the Kurdistan region, Fouad Hussein, and Minister of Planning Ali Sindi, Minister of Electricity and Salahuddin Babacar.

Follow up (AIN) -US President Barack Obama’s administration is ramping up its efforts to train and arm Sunni tribal fighters, who it hopes will lead a coming effort to reclaim Anbar province from the Islamic State, a tacit admission that the Iraqi military itself won’t be up to the job anytime soon — and that the Islamic State has managed to expand its control of the region despite months of U.S. airstrikes.
The White House’s move will involve the deployment of up to 450 additional U.S. military advisors, pushing the total American troop presence in Iraq to roughly 3,600. This new effort will be centered at the al-Taqaddum military base in Anbar, which is situated between the Islamic State-held cities of Ramadi and Fallujah. The site will mark the fifth U.S.-staffed training site in Iraq.

The new push comes just weeks after Ramadi fell to the Islamic State, which managed to conquer the city of 500,000 with a force estimated at just a few hundred fighters. As with previous cities claimed by the militants, the Iraqi forces deployed there fled in droves, leaving behind large quantities of U.S.-provided weaponry and vehicles. The militants have in turn converted large quantities of armored American Humvees into Mad Max-style rolling bombs.

It’s far from clear that the move will mollify White House critics on Capitol Hill and in Baghdad, where Iraqi Prime Minister Haider al-Abadi and other top officials say the United States has been slow to provide Baghdad with the weapons needed to mount a concerted effort to beat back the Islamic State. Many Republicans, meanwhile, want the administration to deploy U.S. special operations personnel to fight alongside the Iraqis they’re training and to move closer to the front lines to call in American airstrikes.

“The need for additional U.S. forces to help our Iraqi allies defeat ISIL has been apparent for some time,” said House Armed Services Committee Chairman Mac Thornberry (R-Texas), who supports the additional deployments. “However, disconnected from a broader coherent strategy, it is not likely to be any more successful than our previous efforts.”

In a call outlining the plan to reporters, Deputy National Security Advisor Ben Rhodes said Obama has not ruled out additional steps — including, potentially, more forces and air power — should they be needed. But Rhodes said a more lasting stability would be gained by having Iraqi forces, including local Sunni tribal fighters, lead the way.

Obama has made clear, Rhodes said, that “there has to be local solutions to taking back this territory and holding it, and that the U.S. military cannot and should not do this simply for Iraqis. And frankly, the Iraqis wanted to be in the lead themselves.”

Rhodes repeatedly said that U.S. troops would not go on any combat missions from al-Taqaddum. But officials conceded that American troops would engage in force protection, which in the past has given wide latitude to soldiers who leave their base on lethal patrols to head off future attacks. Al-Taqaddum was picked as a training site to put U.S. troops closer to the Iraqi forces they will be guiding — and to the fight itself. “We need to make sure that in terms of where our forces are and how we are able to equip Iraqi forces, that we can be more nimble,” Rhodes said. “Because clearly, this is a very nimble enemy.”

Some of the troops heading to Iraq will be involved in teaching the Iraqi Army how to train the tribal forces themselves, which would eventually allow the Americans to focus their attention on other critical tasks like logistics, intelligence collection, and coordinating airstrikes. Since the fall of Ramadi, al-Taqaddum has become an operations center for the fight in Anbar, and U.S. forces based there will be very much involved in the air war, along with managing the flow of supplies to Iraqi forces in the field.

The new plan also calls for speeding up the equipping of Iraqi forces, which Pentagon spokesman Col. Steve Warren said on Wednesday will include body armor, small arms, radios, and other basic equipment. But when it comes to the tribal fighters, American forces will not equip them directly. Instead, they will hand over equipment to Baghdad for distribution to the tribes. It also will create an $800 million fund, handled by the United Nations, to help Iraq communities stabilize once Islamic State militants have been pushed out.

Much of the new training will revolve around Iraqi special operations forces and building up the depleted strength of the Iraqi 8th Division, which has lost hundreds to fighting and desertion. U.S. officials estimate that 3,000 raw Iraqi recruits will have to be trained to make up for the shortfalls.

Turning those recruits into a cohesive fighting force, while trying to integrate thousands of Sunni tribal fighters with little love for the central government into a force that can stand on its own, will be a huge test for American patience and Iraqi will. And the first step in this uncertain process will be to maintain pressure on the Iraqi government to make a consistent effort to not only reach out to those tribes, but also to arm, equip, and sustain them over the long haul.

In effect, Washington is trying to revive a strategy used to great effect during the so-called “Sunni Awakening” that began in 2007 when large numbers of Sunni tribal fighters joined with U.S. troops to help defeat al Qaeda in Iraq, the Islamic State’s predecessor. Former Iraqi Prime Minister Nouri al-Maliki promised to incorporate the Sunni fighters into Iraq’s standing security forces and pay them regular salaries, but failed to do so, sparking widespread sectarian fury across Anbar that left some Sunni tribal leaders amenable to working alongside the Islamic State. Washington and Baghdad are now working to reverse that dynamic and get the Sunni tribal fighters to turn on the militants, but it’s far from clear if enough of the fighters will be willing to do so to truly change the situation on the battlefield.

Officials also highlighted continued concerns about the flow of foreign fighters joining the Islamic State, the number of which Rhodes estimated at between 20,000 and 30,000. He said that includes about 180 Americans and “thousands” of Europeans who aspire to fight in Iraq and Syria./End/

History of edits:: 2015/6/15 19:13 • 21 visits readable
Activation heal the memorandum signed by the governor of Basra .. receives a delegation from the US city of Houston and looking with them ways of activating the memorandum

{Basra: Euphrates News} governor of Basra Majed Nasraoui, received Monday in his office at the Diwan of the province and a delegation diplomatically and commercially represents the US city of Houston, in order to activate the memorandum signed by the two sides during the visit of the Governor of the United States of America in the month of May.

The governor of Basra told {Euphrates News} “We have discussed during the meeting, join the province of Basra mechanism to the international oil group cities, and in this aspect we have received an invitation from the Republic of Brazil to complete the procedures for accession”.

He Nasraoui “As we discussed with the delegation of Houston on a mechanism to send fellowships that we agreed to in our visit to the US of the city, as well as speed up the visit US medical delegation which will assess the health situation in Basra, and the possibility of sending the owners are very incurable diseases for treatment in Houston at the expense of the local government of Basra” .

“The US delegation will continue its city with circles Basra province in the next two days; so that both sides come out to see integrated joint cooperation.”

For her part, Advisory lawyer US Department of Commerce Mays Alabbosi that “the representative of the delegation to the US Department of Commerce, came to Basra to meet with the delegation, who visited the city of Houston, which was chaired by the governor of Basra, and we discussed ways of activating the program, which was agreed upon in heal agreement signed between the province of Basra, the US and the City” . It ended up as h