Four years after its departure from Iraq, Nato is planning to re-engage with the country by training officers to help in the fight against Islamic State.

In response to a request for help earlier this year by the Iraqi government, the US-led alliance is also working on several proposals as well as the training, which comes despite the failure of Nato’s previous attempt to create a professional officer force in Iraq.

Nato started training in Iraq in 2004, a year after the invasion, with the declared aim of creating an “effective force”, and left in 2011. Despite training 5,000 officers, running at least 2,000 courses and spending millions on teaching officers both in the country and in Nato countries, the Iraqi army collapsed when confronted by Isis in Mosul last year and Ramadi this year.

There is frustration in the US and in the UK over repeated delays in mounting attacks to reclaim the two cities, although Iraqi forces – aided by Shia militias and air strikes by the US, Britain and others – have managed to retake Tikrit.

Defence ministers are scheduled to meet at Nato headquarters in Brussels on Wednesday and Thursday, mainly to discuss progress on a new rapid-reaction force that can be deployed on the alliance’s eastern front against Russia or in the south and south-east in conflicts such as Libya, Syria or Iraq.

Stepping up pressure on Russia, the US defence secretary, Ash Carter, announced on Tuesday the locations for 250 US tanks, armoured vehicles and artillery by the end of the year: Poland, Romania, Bulgaria, Estonia, Latvia and Lithuania.

The equipment will remain in place for use by troops sent for exercises to these countries on a rotational basis.

The US ambassador to Nato, Douglas Lute, described it as being like “a rental car-type agreement for training equipment”.

The positioning of permanent equipment right up against the Russian border could act as a further irritant to President Vladimir Putin.

Nato officials are still in discussion with Iraq and with member nations about what help it would provide in the fight against Isis. Sixty-two countries, including all 28 Nato states, are at present engaged in an international coalition against Islamic State.

Lute said no decision had yet been taken on whether to hold the training inside or outside of Iraq.

Nato’s return to Iraq, although modest at this stage, would be hugely symbolic, another example of it working beyond its traditional cold war remit and adopting a wider interpretation of its role.

A senior Nato official said there was no plan at present for involvement in either Libya or Syria.

The official said the deadline for completion of the first part of an Iraq package was the end of July. “At this stage, what we are not talking about is putting a big Nato operation into Iraq. Let’s be clear about that. The coalition is there, it is developing its training effort and so what Nato would wish to do would be complementary to that as a first phase. We are looking at short-, medium- and long-term measures.”

He added: “Iraq came to us with a list of, I think, 11 specific areas where they wanted support. We figured that within that, there were seven that made sense for Nato.”

The move back to Iraq comes after former Nato secretary general Anders Fogh Rasmussen insisted last year that he saw no role for the alliance in Iraq. He said Nato’s role was the defence of allies and it had no mandate or request for Iraq. 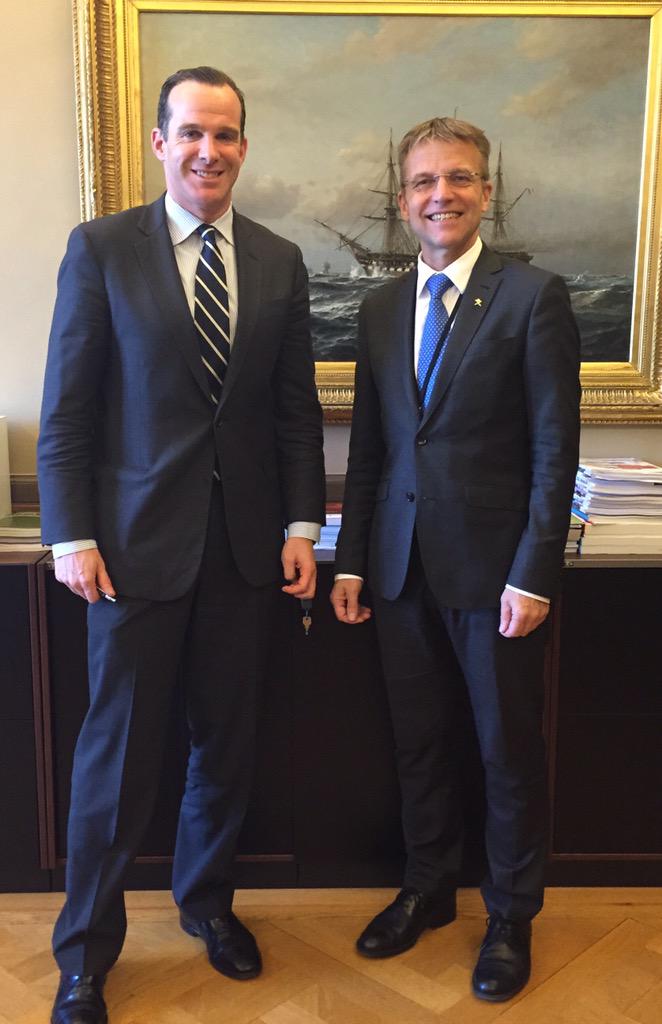 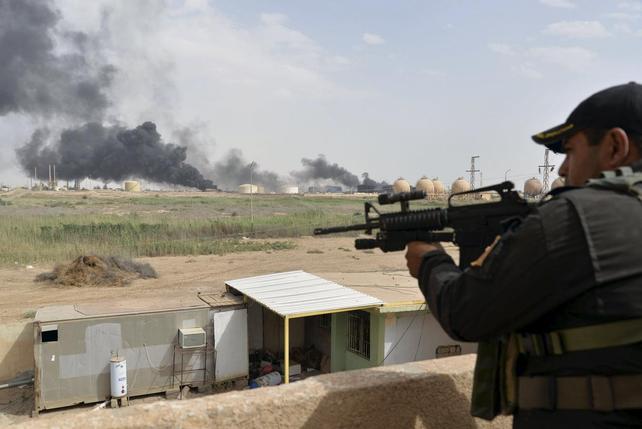 NATO is expected to announce soon a plan to advise the Iraqi government on reforming its security forces which are fighting back after collapsing in the face of an offensive by Islamic State fighters, NATO diplomats said on Tuesday.

A U.S.-led coalition has been conducting air strikes against Islamic State in Iraq and Syria but NATO as an organization has so far taken little part.

U.S. Ambassador to NATO Douglas Lute said a plan under discussion at NATO could include advising Iraq on reforming its security sector and helping the government write a national security program.

NATO could also advise Iraq on logistics and on its military command structure, Lute told a news conference before a meeting of NATO defense ministers on Wednesday and Thursday.

“That program is not yet complete but it is nearly complete so I would say in the coming weeks we would expect an announcement that NATO has finalised with the government of Iraq this defense capacity-building program,” he said.

NATO sources said the package could include some training of the Iraqi army in specialized fields, though this was likely to be for only a small number of officers rather than large numbers of troops.

Lute said it had not yet been decided if any training would be carried out inside Iraq or in another country.

A second NATO diplomat, speaking on condition of anonymity, said the aim was to approve a package of advice and support for Iraqi security sector reform by August.

Senior officials from the defense ministries of countries in the U.S.-led coalition against Islamic State would meet in Brussels on the sidelines of the defense ministers’ meeting to discuss training, among other issues, the diplomat said.

No decision on the advice package is expected this week.

The NATO package is designed to complement what NATO allies are doing individually to assist Iraq with training.

NATO previously had a team training Iraqi security forces but it was withdrawn from Iraq at the end of 2011 when no agreement could be reached on the legal status of NATO troops operating in the country.

(We were victorious and move forward on Daash gangs in all the pieces and convinced us the world to stand with us and let the world wake up because the threat will extend to them).

– Prime Minister and Commander in Chief of the Armed Forces, Dr. Haider Abadi while inspecting fighters in the Zaidan area.

We are fighting for our land and our pride and our dignity and our holy places and the right for the Iraqis and for the mothers and children be proud of you, despite the intensity of the war, but there are large numbers of volunteers want to fight with you, the most of our requests.

Finance Minister Hoshyar Zebari said in an interview with Al Hurra that the Iraqi government considers pumping large amounts of dollar to meet the low rate of the dinar in the Iraqi market.

Zebari said “Tiger economic and financial crisis exacerbated by the repercussions of the war on terror and the organization of the Islamic state Daash addition to the drop in oil prices.”

He added that the Iraqi government has formed a crisis cell headed by the Prime Minister with the participation of the Minister of Finance, oil and central bank governor and a number of gentlemen advisers meetings on an ongoing basis in order to find solutions to the financial crisis.

A convoy of Iraqi military forces near Baiji refinery at the north of Salahaddin province. Photo Rudaw

ERBIL, Kurdistan Region — Iraqi military forces in a joint operation with Hashd al-Shaabi Shiite militias have regained total control over the oil-rich city of Baiji, according to a military source.

An Iraqi army officer, who asked to remain anonymous, told Rudaw that after a series of fierce clashes with ISIS militants Iraqi military forces finally regained control of Baiji Tuesday night. He added that ISIS militants withdrew from the town and fled north.

On June 7, Shiite militants of Hashd al-Shaabi managed to enter Baiji, located in Iraq’s Salahadin province, but they failed to retake control of all parts of the town from ISIS militants.

The Baiji oil refinery, Iraq’s largest oil facility, has been the scene of intense fighting for many weeks. It was partially overtaken by ISIS fighters during heavy fighting last month. The military source did not mention fresh fighting at the refinery specifically, but did say the military was approaching the site.

Commander in Chief of the Armed Forces, Dr. Haider Abadi addresses, this day, the breakfast of champions with the fighters, and listen to their proposals and requirements to sustain the momentum of triumphs and defeat the enemy.

Mr. Prime Minister, Dr. Haidar al-Abbadi received a delegation BP oil company. He stressed that the oil production and export operations experiencing gradual increases in addition to improved energy Alkhoznip and that continued cooperation between oil companies and the oil ministry is reflected positively on the efforts in the field of employment.

{Basra: Euphrates News} signed by the governor of Basra Majed Nasraoui agreement strengthening governance in Iraq as part of project progress and funded by the US Agency for International Development and private rehabilitation and development of the state departments staff capacity in preparation for the transfer of powers of the eight central ministries to local governments, and be applied in accordance with the law of 21 average for the year 2013 in the month of August.
Said Nasraoui in a statement {Euphrates News} received a copy of it, that the courses which will be launched from tomorrow within the project progress will focus on the development of cadres working in the accounts departments of the local government and departments concerned, as would be the beginning of 2016 is responsible for the preparation of the budgets of those ministries.
He added that the Office of the province has to prepare in advance through training sessions held in the capital Baghdad, it came as the international project progress; to be another aide to the local government.
In turn, a project of international progress Coordinator faith Karim said the agreement signed with the local government focused on the Court and the Provincial Council staff first followed by others as a step to train all government departments staff by providing a range of assistance in the administrative and financial departments, as well as legal and other sections. Ended h
http://translate.googleusercontent.com/translate_c?depth=1&hl=en&prev=search&rurl=translate.google.com&sl=ar&u=http://www.faceiraq.com/inews.php%3Fid%3D3921305&usg=ALkJrhg1aMncKU1h9w_ITwxBypUTH-Q7tw