Iraqis are ready to fight Daash and need international support. 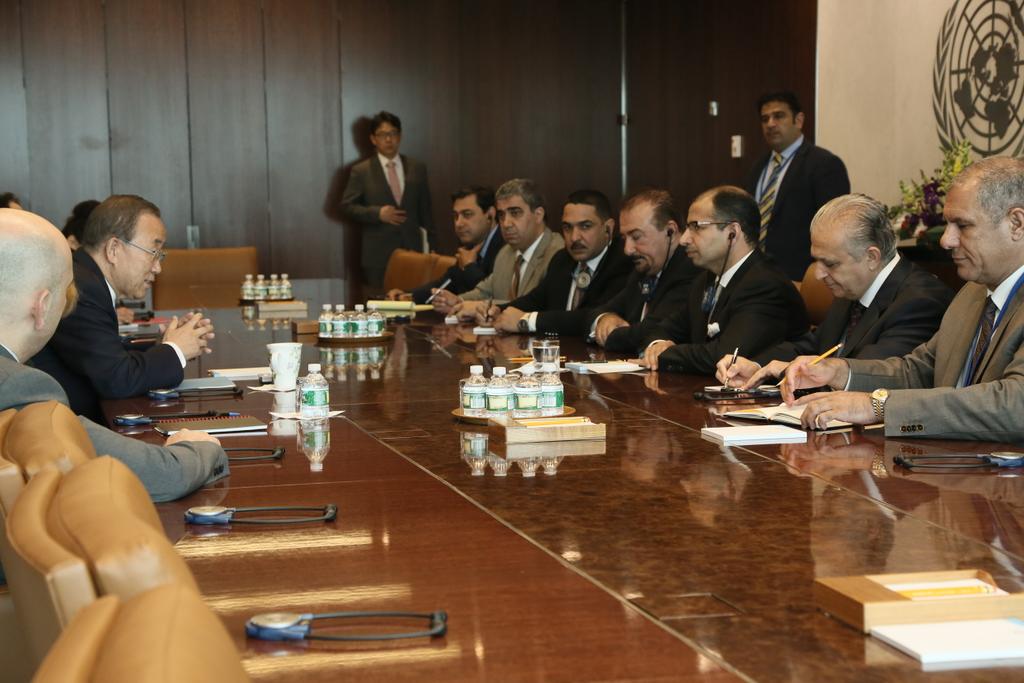 {Salahuddin: Euphrates News} announced federal police captain Raed Shakir Jawdat Daahien five snipers killed after entering the depth of the enemy west of Baiji.
Jawdat said in a statement the agency {Euphrates News} received a copy of it today that “the power of an elected second brigade of commandos second automatic Brigade attacked the den of the enemy in depth of the hole west of Baiji Balrmanat and rockets Larbi G area.”
He said the “attack that killed five snipers Daahien and three mortar throwers, destruction and Lm fully” .anthy
http://translate.googleusercontent.com/translate_c?depth=3&hl=en&prev=/search%3Fq%3Dfaceiraq%26client%3Dsafari%26hl%3Den&rurl=translate.google.com&sandbox=0&sl=ar&u=http://www.faceiraq.com/inews.php%3Fid%3D3914862&usg=ALkJrhjvrdCOI0R97nDG2Np9AjAoTgplYA

Twilight News / Officials of the Federation of Iraqi forces welcomed what they called a “commitment” to the Kingdom of Jordan support the families of western Iraq in the face of the organization Daash.

The official news agency of Jordan, “Petra” the king was quoted Monday as saying it was “the duty” Oman support Sunni tribes in western Iraq and eastern Syria, in the face of the terrorist organization which controls the areas of the two countries.

The head of the bloc solution Jamal Karbouli, a member of the Paz Union of Forces according to an official statement that “King Abdullah II of Jordan’s comments confirm a clear desire for the Kingdom in maintaining the security of the cities of western Iraq as a deeper strategically for the security of Jordan.”

Karbouli He added that “the positions of the Kingdom along the Iraq crisis was fixed and explicit and clear and committed and did not exceed the official frameworks but were eager to support the Iraqi people without interfering with the internal its affairs.”

A member of the governing body for the powers that Otjad “tribes in western Iraq in dire need of arming, training and the supply was delayed after the government and international support, especially her locked in a battle of honor and dignity against the fiercest extremist terrorist organization knew the history of modern Iraq.”

He called Karbouli “the Iraqi government to strengthen the steps of Jordan – Arab cooperation – Iraqi counter-terrorism as a global scourge kill everyone and take advantage of the aid and assistance Jordanian and Arab in support of our armed forces and the families of the sons of Iraq’s western principals.”

A senior member of the Union of Forces Dhafer al-Ani said he appreciates the “Jordan’s King Abdullah II’s remarks, in which the determination of the Jordanian government supported Arab tribes to fight the terrorist organization Daash confirmed.”

He said that “this move is the culmination of the positions of Jordan in advocating for Iraq in its war against terrorism and its keenness to promote the Arab national security.”

And complaining clan in front of the organization in the province, which shares borders with Syria, Jordan and Saudi Arabia, of the lack of support and reinforcement that you receive from the government of Prime Minister Haider al-Abadi, to meet the organization which controls the areas of the province the largest in Iraq since the beginning of 2014.

Ani said that “the position of the Jordanian monarch expressed perception conscious of the risks of terrorism, which does not target Iraq alone but work to undermine the pillars of the Arab security and lends itself to enemies of the nation in the implementation of their plans to tear the nation and the depletion of its resources in the side wars and the death of the pilot Kasasbeh only evidence Mpadoh Jordan in the face terrorism and its readiness to assume national responsibility, despite the sacrifices. “

He concluded MP Ani statement expressing surprise at the “skepticism of some political forces step Jordan at the time welcomed the Iranian military intervention also demand more US military support,” considering this approach “is to hit the Arab solidarity at heart and pushed Iraq to regional and international Altakndqat”.

Quoted the Jordanian news agency, King Abdullah reaffirmed “during its review of the circumstances and conditions prevailing in the region, it was our duty as a nation to support the tribes in eastern Syria and western Iraq,” and that during a visit Sunday to elders and notables in the Northern Badia.

He said King that “the world recognizes the importance of Jordan’s role in solving the problems in Syria, Iraq and ensure the stability and security of the region.”

Jordan participates in the international coalition led by Washington against the regulation, which has waged air strikes against his presence in Syria and parts of Iraq.

Despite the strikes Alliance, the organization expanded its control in Anbar province over the past months, particularly control of the city of Ramadi, the provincial capital in May / May, the most prominent in the fields of progress in Iraq since his sweeping offensive in the country’s north and west in June 2014.

The United States seeks, which announced this month to increase the number of military advisers in Iraq, to ​​strengthen the role of the tribes against the organization in its fight.

The alliance of the Iraqi forces highlighted the political representative of the Year in Iraq, it has the largest number of their representatives in the House of Representatives. Featuring prominent politicians as vice president Osama Najafi and House Speaker Salim al.

Packages of the US dollar – EM

Husseini said in a statement responded to Twilight News “The rise in prices was due to the monetary policy of the State and some of the decisions taken by the Central Bank of Iraq that,” adding, “must be managed monetary policy of competent persons have the experience and competence in monetary and economic policy in this area.”

She continued, “the Prime Minister to entrust the Central Bank of Iraq is to have the highest personal and economic experience certificate in the area of ​​monetary policy.”

The text of a general amnesty, which was voted on Tuesday Act, the Council of Ministers and forwarded to Parliament
16-06-2015 10:42 PMAre free –

The first article of the law stipulates that a general amnesty be relieved and a comprehensive report on the Iraqis (civilian and military) who are inside and outside Iraq sentenced to death, life imprisonment or temporary imprisonment, or both adversarial or judgments in absentia was acquired degree bits or no gain.

And Article II to apply the provisions of Article (1) of the Act on the accused all detainees of them and was not arrested and are exempted from the crimes all, whatever the degree of both the legal action taken or not taken, but those contained an exemption under this law and stop legal proceedings all right.

Article III stipulates that cleared immediately for convicts and detainees provided for in Article (1) and (2) of this Act after the decision to release from the committee formed under the provisions of this law unless they are convicted or detained for crimes they did not located the Magistrate where or waiver of with the victim or to persons or owe the state even pay Mapzmthm of religion at once or in installments, or the termination of Executive incarceration.

Article IV included an exception to the provisions of this law perpetrators of the following crimes:
First: the crimes set forth in paragraph (ii) of Article (1) of the Supreme Iraqi Criminal Court Act No. 10 of 2005.

VI crimes of rape and Lot.

Seventh – spying on the internal and external security of the state crimes.

Second Opinion: embezzlement crimes unless they are re embezzled money.

Article -5- exempted from the provisions of this law included a general amnesty law No. (19) or pardon.

The general amnesty file a thorny issue between the three authorities, and often calls for parliamentarians and officials by this amnesty, but the executive power constantly emphasizes that it is not its powers, but the powers of the legislative branch.

Article 6 First: A committee or more orders of the head of the Supreme Judicial Council in each region holds the appellate provisions of this law, headed by a judge of the first category and the membership of two judges and a public prosecutor before this Committee member chosen by the chief prosecutor.

Second, civilian and military courts, committees and investigative bodies automatically committed to offer all of unforeseen issues before the committees formed under the Act to make it a priority to issues of convicts and detainees.

Third: The decisions issued by the committees formed under the Act subject to appeal by the victim or prosecution during the period of thirty days from the Tark the decision before the Court of excellence in crimes punishable to death, life imprisonment or temporary and in front of the Court of Appeal with the exception of that and be the verdicts are final.

Fourth: the committees formed under this notice depositor prison administration law which sentenced the accused or the depositor’s lead position management and decision announced in the bulletin board for the Court of Appeal on one who has not been arrested.

Article 7 does not work any provision contrary to the provisions of this law.

-8- Article published this law in the Official Gazette and is effective from the date of approval.

Baghdad (AIN) –The Cabinet approved on Tuesday funding the projects of the Ministry of Transport among them establishing railway lines Karbala-Najaf and Basrah-Shilamjah and executing the infrastructure of Al-Faw Al-Kabir port. /End/
http://en.alliraqnews.com/modules/news/article.php?storyid=1427

{Wasit: Euphrates News} met with the governor of Wasit owner behind Valley cadre company {Tianjinco} Chinese, and have indicated a willingness to work in the province for infrastructure projects.
A statement by the Office of the valley received {Euphrates News} a copy of it today, “The governor of Wasit province put the needs of the province in the housing and commercial complexes and infrastructure sector, and municipal services such as water and sewage plants sewage treatment plants, hospitals, bridges investment one way or payment on credit, and according to the controls and instructions The central government, which will be worked out soon.
The statement said that “the director of the board of investment and Wasit in turn accept the needs of the industrial, agricultural, commercial, health and service the province, it was presented the investment map of the province, and will be studied by the Chinese side, which was never his desire to create residential complexes in accordance with the investment gateway.” It ended 26 h
http://translate.googleusercontent.com/translate_c?depth=3&hl=en&prev=/search%3Fq%3Dfaceiraq%26client%3Dsafari%26hl%3Den&rurl=translate.google.com&sandbox=0&sl=ar&u=http://www.faceiraq.com/inews.php%3Fid%3D3914862&usg=ALkJrhjvrdCOI0R97nDG2Np9AjAoTgplYA