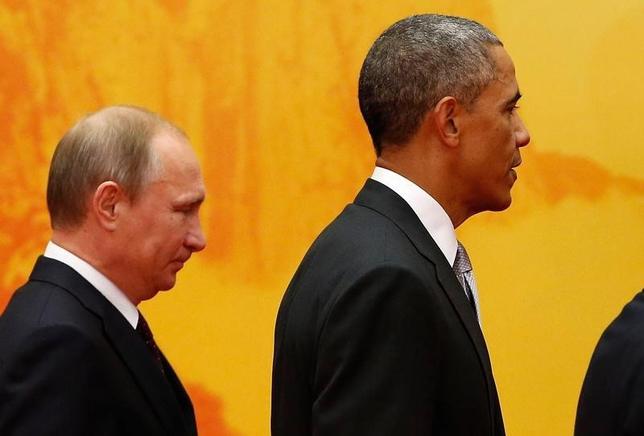 Russian President Vladimir Putin US President Barack Obama on Thursday, first call since February, to discuss Iran talks, “the dangerous situation in Syria” and the need to counter Islamic State the White House said in a statement.

“The leaders discussed the increasingly dangerous situation in Syria, and underscored the importance of continued P5 + 1 unity in ongoing negotiations to prevent Iran from acquiring a nuclear weapon,” the White House said.

Obama also told Putin that Russia needs to live to up to the terms of a ceasefire deal with Ukraine, “including the removal of all Russian troops and equipment from Ukrainian territory,” the White House said.

Baghdad (AIN) –The member of the Parliamentary Security and Defense Committee said on Thursday that planes and different kinds of weapons are to arrive in Iraq soon.

“Warplanes among them F16, anti-explosive devices, anti-tank missiles, and others are going to arrive in Iraq to support the Iraqi security forces,” MP Majid al-Gharawi said to AIN. /End/

BAGHDAD / … announced Transport Minister Baqir al-Zubaidi, on Thursday, the opening of offices for the insurance people and goods at border crossing points according to the insurance business regulation No. 10 of 2005 Act.

A statement of the Office Zubaidi received “eye Iraq News,” as saying that the General Secretariat of the Council of Ministers approved the recommendation for the minutes to open offices Insurance within the border crossing points for companies wishing National Committee meeting to facilitate transport and trade VI, your exercise activity insurance on goods and people. “

It promised: “The decision comes to providing equal opportunities for insurance companies, under the organization of the insurance business No. 10 of 2005 law”. It ended 1

The Minister of Electricity Qassim Mohammed Fahdawi, Thursday, the need to overcome all the obstacles facing the work of Japanese companies and the payment of all dues, with the Japanese ambassador in Iraq called for the payment of dues its operating companies in the field of energy in the Iraqi territory.

The Electricity Ministry said in a statement, “The Minister of Electricity Qassim Mohammed Fahdawi, received at the ministry’s headquarters in the capital Baghdad, the Japanese ambassador to Iraq (Kazuya Nascida), and discussed with him the possibility of cooperation with Japanese companies, and the organization of joint meetings between Japanese industrialists and Iraqis.”

She added that “the two sides addressed the possibility of accelerating the pace of work of Japanese companies in the field of energy as well as providing expertise, consulting and training, as well as to submit a proposal to the Japanese ambassador to the establishment of manufacturing plants concentrated in the liberated areas (Salahuddin, Diyala, Anbar) with Mtnqlatha”.

The Minister of Electricity according to the statement “the need to overcome all the obstacles facing the work of Japanese companies and pay all their dues through the formation of a committee under the supervision of the Under Secretary for projects Adil Humaid”.

Fahdawi and explained that “the contribution of Japanese companies to develop stations operating to ensure raise its production capacity will be reflected positively in increasing the hours of processing for the Iraqi people.”

For his part, the Japanese ambassador presented a request to the Minister of electricity dues on some Japanese companies such as Toyota company operating in Iraq, stressing his country’s readiness Snaaaaha companies and to support the electricity sector in Iraq. “

BAGHDAD Anatolia: made, Nuri al-Maliki, Iraqi Vice President, testified about the fall of the city of Mosul, however, the organization of the Islamic state “Daash” terrorist, and that before a parliamentary committee set up by the House of Representatives to investigate the matter, according to a statement issued by Maliki’s office Thursday.
The statement pointed out that the agency Anatolia received a copy of it, that al-Maliki responded to the Committee’s questions and “answers in the number of official documents that will assist the Commission of Inquiry to see the details of the events with objectivity and accuracy, was sent today to the House of Representatives.”
The “al-Maliki” as prime minister and commander in chief of the armed forces at the fall of the city of Mosul, however, the organization “Daash” terrorist last June.
He drew a lot finger at “al-Maliki” and hold him directly responsible for the fall of Mosul, and other areas, however, “Daash”, on the grounds that it was running security institutions in the country directly at army and other security agencies before the collapse of the creep elements of the organization.
And causing the fall of Mosul to raise many questions about how the thousands of militants “Daash”, from the defeat of tens of thousands of processors with weapons and military equipment US soldiers, in a few days.
Maliki said then, that his government “suffered a conspiracy”, without explaining its dimensions.

Welcomed the Vice-President of the Council of Anbar province, Faleh al-Issawi, Thursday, with the participation of the Jordanian army with US troops in the elimination of gangs “Daash” criminal.

Quoted “Sputnik” Russian news her about al-Issawi said that “there is a consensus in Anbar, agreeing to Berri intervention Jordanian for the Liberation of the province of control Daash criminal gangs”, in addition to military support Jordan’s King Abdullah II expressed his agreement to submit to Iraqi volunteers year war on terror “.

He said al-Issawi, according to the Russian agency that “Jordan’s King Abdullah II cut, during a meeting with a number of the elders of the Iraqi Sunni tribes, the middle of this month, a promise to provide support for their children volunteer to fight in the west of Iraq, in addition to the protection of the Sunni areas in the east of Syria.

King stressed his confidence on the capabilities of the Jordanian armed forces in the protection of the common border between Iraq and Jordan.

{Basra: Euphrates News} urged the governor of Basra Majed Nasraoui elders and notables Hartha area to join forces, and the rejection of tribal differences and reduce them; they began to affect the delivery of services and the implementation of projects in areas north of Basra.
A statement by the Office Nasraoui received {Euphrates News} a copy of it today, “The governor of Basra, met a number of elders and notables Hartha area in his office at the Diwan of the province.”
And between that he can not provide services to citizens and we hear from time to time and the other tribal conflict here and there and cut public road.
“We will never tolerate troublemakers these conflicts and arrested both collaborators and tried repeatedly to resolve by peaceful means, but unfortunately some people do not want that.”
He said a decision stationing military regiment in those areas with the approval and authorization of the Prime Minister Haider al-Abadi, and the clans precious take responsibility and help the security effort for their own interest first, in the interests of the province of Basra second.
He Nasraoui “We While we want security and stability to areas north of Basra, but we did not and will not abandon them in the provision of services of paving the streets, and the delivery of electricity, and the building of schools, health services and other services, and continue in that although there problems that we have mentioned.” Ended h
http://translate.googleusercontent.com/translate_c?depth=1&hl=en&prev=search&rurl=translate.google.com&sl=ar&u=http://www.faceiraq.com/inews.php%3Fid%3D3944687&usg=ALkJrhhvslpA5DkvJj14Xv_UNBxyfjHTZg

He said a presidential statement today that the infallible met Mach and expressed astonishment which published the newspaper (UAE statement) and reports by some local newspapers about the attempt of President keep al-Maliki from office in addition to other scenarios, stressing that “this news is untrue altogether and stressed the need for means-resolution media and professional publishing in the news. ”

Masum said that “the Iraqi political parties to make every possible effort in order to unify the Iraqi ranks and the completion of comprehensive national reconciliation and the elimination of the terrorist organization Daash”.

He commended infallible and al-Maliki on the efforts and sacrifices of the people of the armed forces and the popular crowd and the Peshmerga in addressing the organization Daash dearly and Bzlhm to liberate and secure all areas under the control of terrorists and work for the return of displaced people to their home areas them.

President and trading with his deputy, developments in the political, security and economic situation on the Iraqi arena and the nature of Iraq’s relations with regional and international surroundings and to discuss the steps accomplished on the road to national reconciliation and the desired future and mechanisms to be followed in order to reach real reconciliation include everyone without discrimination with the exception of those hands are stained with the blood of Iraqis and otherwise ordered will contribute Iraq to build a federal, democratic, progressive and prosperous at all levels.

And eighth-Maliki role infallible President and his outstanding efforts in bringing the views of the political parties to reach Iraq to safety.