Around 2,000 displaced families have returned to #Tikrit, according to #Iraq‘s Independent High Commission for HR. 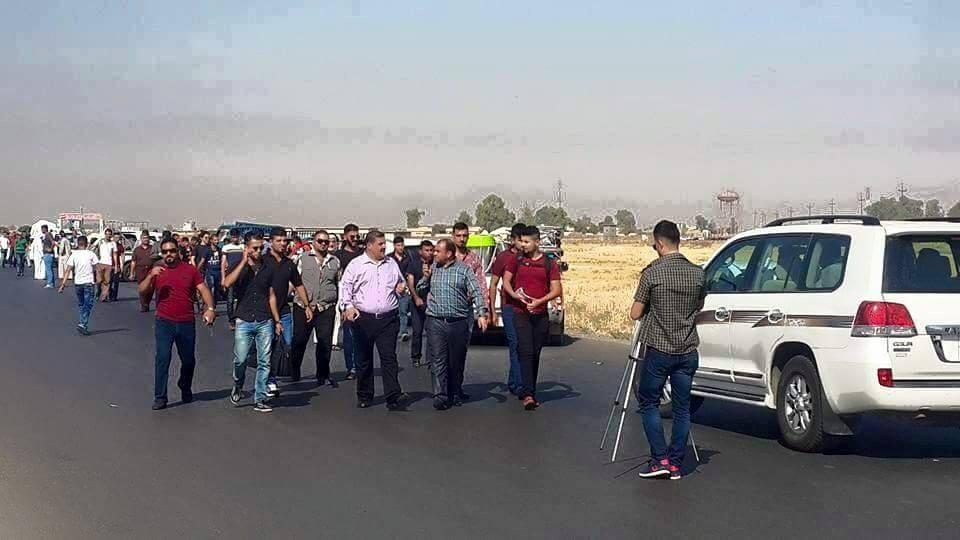 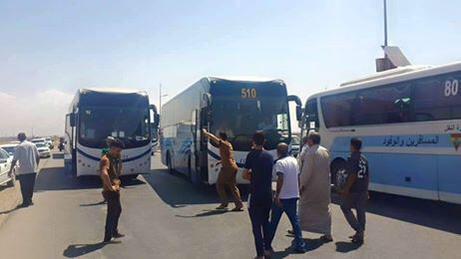 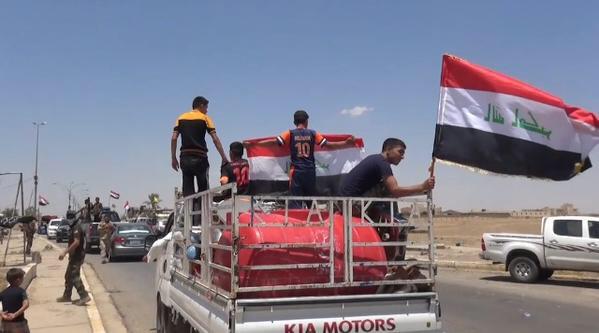 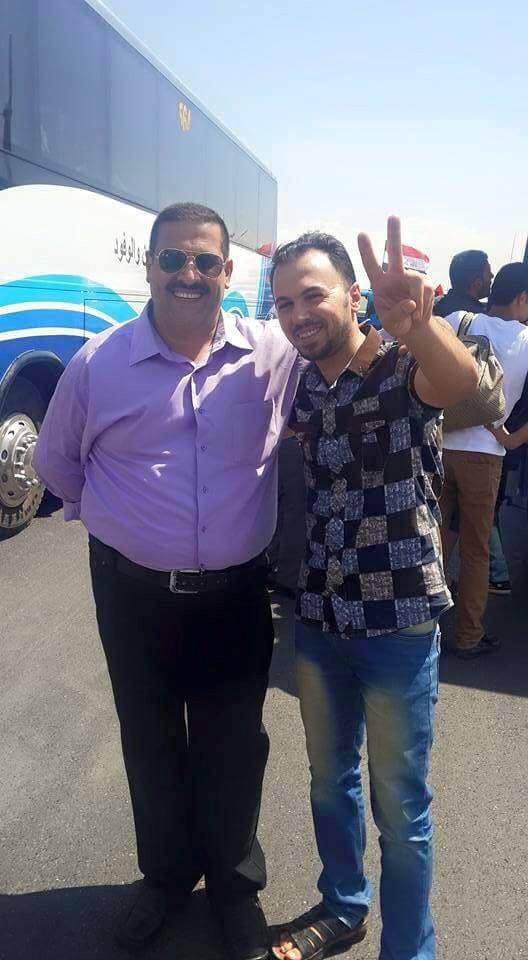 US personnel at al Taqaddum air base in Iraq are beginning to train Sunni Leaders in basic Soldiering to help defeat the Islamic State, a defense official said Friday.
Marine Brig. Gen. Weidley Thomas , chief of staff for Combined Joint Task Force-Operation Inherent Resolve, said Sunni Leaders Those can then return to Hwy tribes to pass along the skills they learned in a “train the trainers” -type system.
“We provide the expertise to the tribal trainers and then the tribal trainers will go ahead and conduct training with their individual forces,” he told reporters via video from southwest Asia. “Those subject matter expert exchanges have already commenced at Taqaddum.”
The administration announced earlier this month that 450 additional US personnel were heading to al Taqaddum air base to facilitation relations between the Shiite Iraqi central government and Sunni fighters. Defense Secretary Ashton Carter told lawmakers this week that they could expect to see progress in recruiting more Sunni fighters within “weeks.”
Gen. Weidley That said both the recruiting and Vetting of Sunni tribal fighters is done by the Iraqi Government, not by US or Coalition forces.
Five hundred Sunnis were inducted into the Iraqi Popular Mobilization Force in a ceremony at the base Wednesday, he said – a sign that the US presence is helping to bridge the sectarian divide.

When Specifically Asked about previous comments he made ​​That the Islamic State was on the defense just days before Ramadi fell into Terrorist control, Gen. Weidley pointed to recent Successes by State anti-Islamic forces in Syria and Iraq . He also said civilians are finally returning to Tikrit this week, which was uninhabitable for months after being reclaimed by Iraqi forces due to improvised explosive devices throughout the city.
“When I look at the battlespace and all those individual efforts, we see great things happening out there,” he said.
Gen. Weidley Also Provided updates on other key battles in Ramadi and Baiji where Iraqi forces are still struggling to drive out of the Terrorists Cities.
In Baiji, he said Iraqi forces are “making steady progress” clearing the city. He also said Iraqi forces have opened a key supply route to the oil refinery north of the city to resupply forces there.
In Ramadi, Iraqis are working to improve organization and command and control assets to help prepare for future operations. Shaping operations on the ground are ongoing, including security communications channels and roadways, collecting intelligence and rehearsing assaults.

BAGHDAD / Center Brief for the Iraqi Media Network (IMN) – Prime Minister for Economic Affairs adviser said the appearance of Mohammed Saleh, said that the financial credit rating conducted by a government delegation in Turkey this week will announce next month its nature.
He said Saleh’s (IMN), that “the negotiations held between the Iraqi delegation and between Fitch and Rhodes delegation of international credit rating in Turkey this week will announce its findings in July next”, noting that “countries will be her decision in rated credit financially granting Iraq “.
Saleh and predicted that “Iraq gets a good financial credit rating given the economic possibilities enjoyed by the country,” adding that “halving the financial credit is a country’s ability to pay its debts without lag or slowdown.”
He added that “the government delegation assured the bargaining for the safety of the Iraqi economy.”
Held Tuesday consultations session between the Iraqi delegation headed by the Minister of Finance Hochearzibara and between Fitch and Rhodes international credit rating within a bid for the Iraqi government to get more financial support and access to international capital markets and the issuance of sovereign bonds Iraqi government spokesman.
From: Haider al-Tamimi, editor: Ali Al-Shammari

Information / follow-up / ..
More than 300 thousand worshipers attended the prayers at the Al Aqsa Mosque first Friday of the holy month of Ramadan despite the occupation procedures that prevented the arrival of hundreds of thousands of other worshipers who meant Far from all the occupied territories of Palestine.
Prayer has seen the presence of occupying Israeli action, saying it could not prevent hundreds of thousands of Palestinians in all cities and towns in the West Bank and also the Palestinian territories and the Gaza Strip from traveling and access to Al-Aqsa Mosque.
According to recent statistics, the number of worshipers who have already arrived at the Al-Aqsa Mosque estimated 300 thousand worshipers came from various parts of the Occupied Palestinian Territory.
Despite the talk about the Israeli occupying facilities, but the process prevented the arrival of hundreds of thousands of other Palestinians who went to the Al-Aqsa Mosque.
And Kjmah first of the month of Ramadan there was a big creep worshipers of all ages, men, women and children to gain access to Al-Aqsa Mosque.
The prayer took place quietly, and there was open to various sections of the Al Aqsa Mosque and also the surrounding wall of the Old City Kds.anthy / Agencies doors

San Boutros-Iraq Press -19 June: withdrew Vice President Osama Najafi and his accompanying delegation, on Friday, a session of the World Economic Forum held in the Russian city of St. Petersburg.

According to a statement of the Office of the Vice President of the Republic, that “Najafi withdrew abruptly from the Economic Forum was due to the presence of the President of Israel, former Shimon Peres of the session,” noting that “members of the Iraqi delegation and they both Salman Jumaili, Minister of Planning and Mlas Mohammed Abdel-Karim, Minister of Trade pulled out also in the session “.

It is noteworthy that the World Economic Forum being held in the Russian city of St. Petersburg for two days in the presence of international and Asa.anthy (1)

{International: Euphrates News} The Organization of Petroleum Exporting Countries {OPEC} today that the price of its basket of crudes rose 12 Thursday by 28 cents to settle at 55.60 dollars a barrel compared to 27.60 dollars on Wednesday.

The news agency reported {OPEC} that “the bulletin annual rate for the basket price last year was 29.96 dollars a barrel.”

The oil ministers of OPEC {} decided at the conclusion of the annual ministerial meeting in the fifth of this month of June to maintain the current production ceiling of the member states of the organization selected thirty million barrels of oil Aumia.anthy