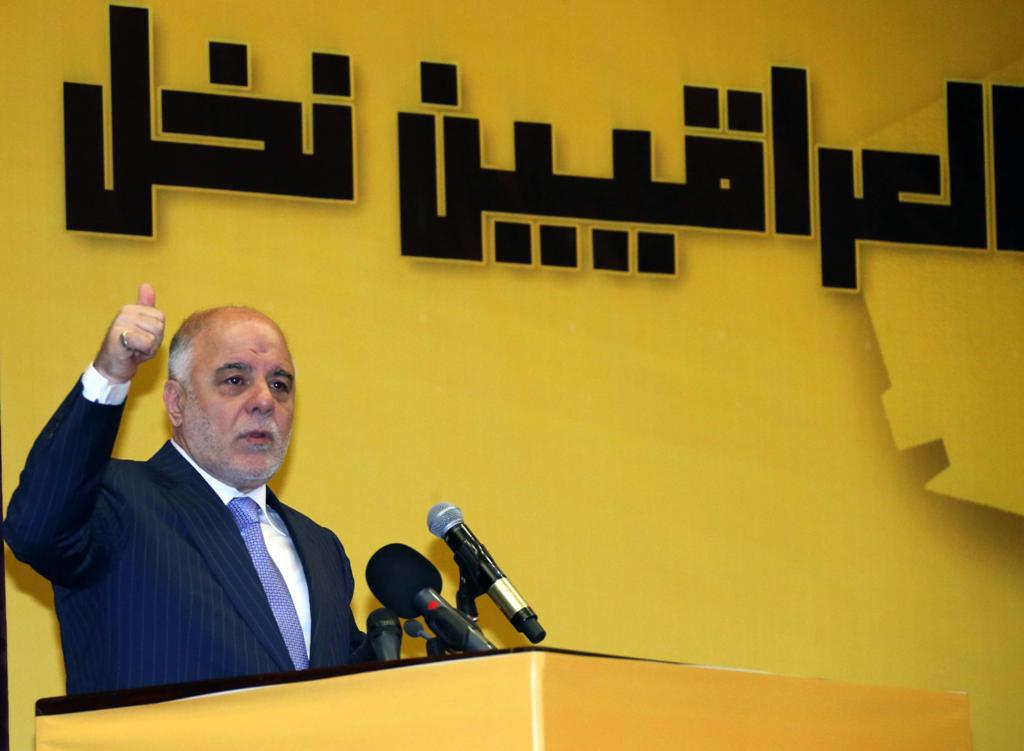 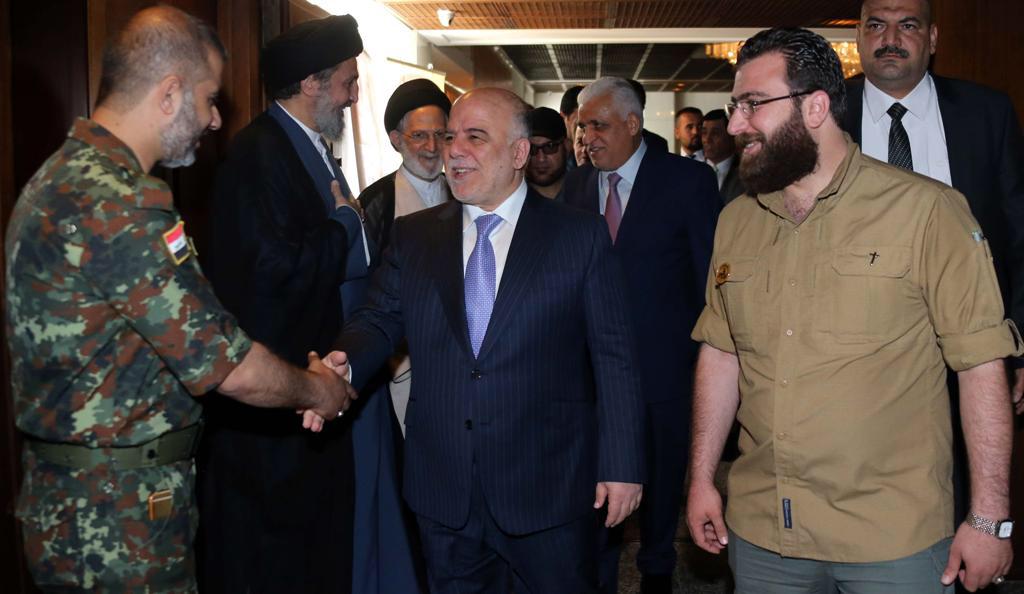 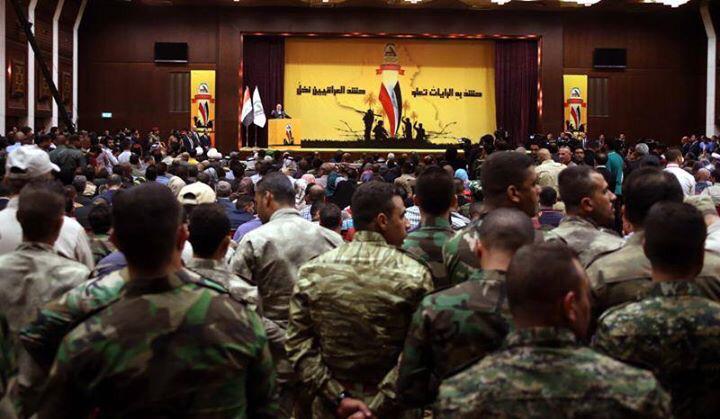 The Ministry of Finance announced in the provincial government, the start of the employees’ salaries for the month of April distribution on Sunday. The ministry statement said, “The region’s share of the budget for the month of May, amounting to 508 billion dinars reached on Friday to the region. He added that,” adding that the start of the employees’ salaries distribution will be on Sunday, to be the Ministry of Peshmerga is the first Ministry employees receive their salaries. ”

House Speaker concluded Dr. Salim al-Jubouri, on Saturday, visit the US capital Washington, to meet with US Secretary of Defense Ashton Carter in the Pentagon building.

During the meeting, the discussion of arming and training tribal operation to liberate their land, with the need to intensify the support and backing to Iraqi forces by increasing sorties intelligence and information that contribute to the resolution of the battle and the elimination of Daash.

It is scheduled to leave tomorrow sovereignty Washington on his way to New York to meet with UN Secretary-General Ban Ki-moon and the application of UN member states to support the Iraqi security and relief level.

#ISIL terrorists increasingly on the run in northern #Syria as Kurdish & #FSA fighters close in on main supply routes to #Raqqa.

Compared notes with Speaker Jabouri after his successful week in Washington, focused on mobilizing tribes in #Anbar. 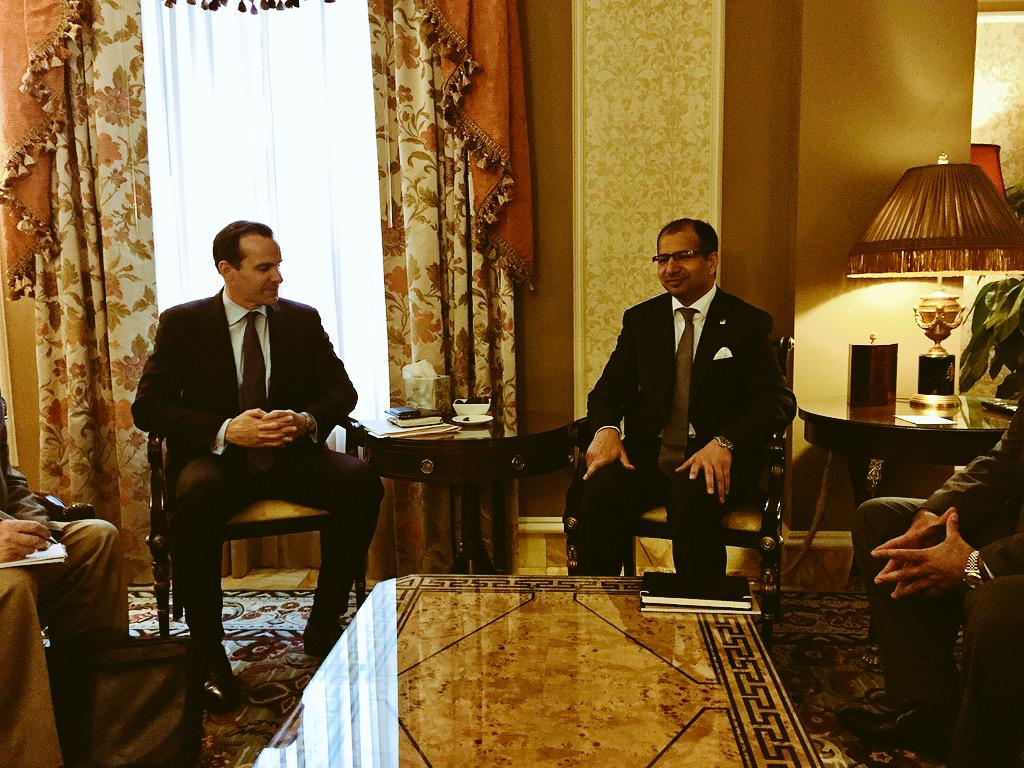 Chairman of the Security Committee in the Khalidiya district council announced the arrival of 300 US military adviser to the Habbaniyah Air Base, east of Ramadi, to help cleanse the province of organization

Daash.
Committee Chairman Ibrahim Khleifawi in an interview to the (long-Presse), said that “300 US military adviser arrived Saturday morning to Habbaniyah Air Base, east of the city of Ramadi, to advise operations cleanse the province of elements of al Daash and ways of security forces training.” He Khleifawi “The advisers will hold a meeting with security chiefs to discuss the security situation in the province and examine security plans.”
US President Barack Obama decided on Thursday to send 450 advisers US for Iraq to be deployed in the new fifth base will be opened in Anbar to assist local forces in their war against Daash.
This comes at a time, said a source in the gold band in Anbar province, yesterday, that the strength of the gold band foiled an attempt to target the gathering of the security forces in the recent three cars driven by suicide bombers from al Daash, while stressing the killing of the three suicide bombers.
The source said in an interview with ( long-Presse), “The security force opened fire towards three car bombs driven by suicide bombers from the al-Daash tried to target the gathering of the army and fighters of the clans in the southern modern surroundings spend, (170 km west of Anbar), resulting in a car bombing before reaching the target and killed suicide bombers Three “.
The source, who requested anonymity, that “the security forces crack down taken in anticipation of similar attacks”, without giving further details.
On the other hand the source pointed out that “the security force of the EP and the crowd were able to repel the violent attack of the elements of the organization Daash who have targeted gatherings, security headquarters in Albu Khanfar area and Subaihat and Albu Jassim in the vine spend, (19 km east of Fallujah), killed 19 element of organization Daash including four suicide bombers who were wearing explosive belts. ”
The source added that “the organization Daash withdraw its elements to Inside vine Fallujah Center after taking such a heavy toll elements and equipment “, adding that” the security forces reinforced their presence in the vicinity of the vine spend in preparation for the storm and cleared of elements of the organization. ”
The Anbar province has seen fierce fighting after the control of the organization Daash to most cities of the province, including Ramadi and Fallujah western regions and the loss of hundreds of dead and wounded among the military and police and civilians during confrontations.
http://www.almadapaper.net/ar/news/489688/%D8%A7%D9%84%D8%A7%D9%86%D8%A8%D8%A7%D8%B1-%D8%AA%D8%B9%D9%84%D9%86-%D9%88%D8%B5%D9%88%D9%84-300-%D9%85%D8%B3%D8%AA%D8%B4%D8%A7%D8%B1-%D8%A3%D9%85%D9%8A%D8%B1%D9%83%D9%8A-%D8%A5%D9%84%D9%89-

{Baghdad: Euphrates News} concluded Parliament Speaker Salim al-Saturday visit to Washington, DC to meet with Secretary of Defense Ashton Carter at the Defense Ministry building.
A statement by the speaker’s office said in a statement the agency {Euphrates News} received a copy of it, “said the meeting discussed the arming of the sons of the tribes and training process to liberate their land, with the need to intensify the support and backing of Iraqi security forces through the increase of sorties intelligence and information that contribute to the resolution of the battle and the elimination of gangs Daash terrorist “.
“It is scheduled to leave on Sunday Jubouri Washington on his way to New York to meet with UN Secretary-General Ban Ki-moon and the demand of the United Nations Member States to support Iraq on the security and relief levels.”
The head of the House of Representatives has secured $ 500 million to support the displaced through the Humanitarian Response Plan initiative, and another 500 through a grant provided by the United States provided to the displaced people through Altdh.anthy Nations as
http://translate.googleusercontent.com/translate_c?depth=1&hl=en&prev=search&rurl=translate.google.com&sl=ar&u=http://www.faceiraq.com/inews.php%3Fid%3D3906262&usg=ALkJrhhFcXzev8CoUPzz4Y9Brk1qQHsdVQ

Former US President George W. Bush said that he was always in favor of sending more US ground troops to Iraq. Bush said in an interview with Israeli newspapers also published in the United States: «Of course the decision in the hands of the president alone. And my position is that we need soldiers on the ground. Many have said here that it is difficult to defeat al-Qaida, which now calls itself Daash two one thing in my view. It has been said a lot to me that I leave Iraq, but I chose the contrary I have sent 30 thousand of our soldiers in addition to those who were there. I believe that history will see that al-Qaeda in Iraq was defeated because of this decision. In short, it has chosen the way of sending more soldiers and we have to wait to see if our government will adapt to the reality on the ground ».

The public opinion polls have shown that 52 percent of Americans believe Bush’s leadership of the US foreign policy were positive period of time while the corresponding figure was 29% two years ago. This comes unexpected rise in the popularity of the former president that public opinion compares extreme positions frequency current President Barack Obama.

Bush said: «Now is the primary concern of those in the United States escalating trend toward isolation from the world. We have seen it in previous decades to World War II when it was common wisdom is that he does not like us in Europe and we have to take care of ourselves only. But we soon realized with the outbreak of war in continental Europe that we can not overlook what is happening here because it will come to us. And then it has intervened in those difficult times. »

On the nuclear deal with Iran, Bush said: «This was a very sensitive topic.Whatever I said, what I will say it will be taken as influential on the current president’s decisions. For this I will not comment on this subject in any way. »

On the Iraq war, Bush said he went to the United Nations and received the decision of the International Organization of forcing Saddam Hussein to give up chemical and biological weapons and to allow inspection and international. He added: «But that man said no inspection does not give up weapons. Its curve has a chance. »

History of edits:: 2015/6/13 22:25 • 51 visits readable
Abdul-Mahdi calls for the revival of the middle class to the importance the process of economic reform and social

{Baghdad: Euphrates News} saw the leader of the Islamic Supreme Council of Iraq’s oil minister Adel Abdul Mahdi, the importance of pumping blood to revive and revive the middle class as the basis of part of the process of economic and social reform.

Said Abdul-Mahdi said in a statement the agency {Euphrates News} received a copy of it on the “middle class collapsed in the siege and sanctions {1990-2003}, and tended most categories to form a major base for poor layer, in contrast indicate surveys and Ministry of Planning and the United Nations in Iraq to class growth medium, at least, according to per capita income, and is a lower and middle three Pfiadtha and upper about 60% of the Iraqi people, although it has in the south less than that {more than 50%, except for Muthanna less than 40%} .. In Basra, more than average National {65%} .. and they tend to expand on the poor class, which makes up about 20% nationally account .. In the south the poor class constitute 30-45% except for Basra {15%}. In Baghdad, constitute the middle class three Pfiadtha {60%} The rich {35%} and poor {5%} .. and approaching the situation in other provinces of the national averages {20% and 60% and 20% of the poor and middle-class and rich respectively} .. except Nineveh, middle-class is constituted 55% and poor close to the south { } 30% and 15% rich. ”

“The middle class consists today of government and native staff, and the device education and health, professionals, traders and medium shops and Earners and smallholders public and agricultural interests and spiritual categories of grade officers and officers, etc. There is no doubt that the income criterion alone is not enough to define the middle class .. There are cultural level standards and professional values, behaviors and lifestyles, and a network of social relations and ambitions, etc., which are all syndrome. We have seen interest from families to educate their children and decent housing in neighborhoods is destitute essential part of the production of the middle class and re-output .. which constitutes the entrances to move from the poor class Central to .. style as identification with the lifestyles and traditions of the rich class was considered part of the ambitions and mobility towards the top. ”

And Azad Abdul-Mahdi said, “What the middle class still have a fragile distorted, and did not mature enough to play their role economic / social / my values ​​as a bridge centered around the lower and upper segments of society, and to pump a lot of values, concepts and practices that allow the launching of the community and the events of movement required, the scrambling impulses and aspirations, and develop capacities and capabilities, to play the pivotal role, without which it will look like society disjointed, clashed, economically, socially and value judgment, not motionless in it. This distortion comes from basically the nature of the state and society Alrieian, which lose income criterion, a lot of its usefulness. medium in the United States class is, for example, make up 45% of the population, compared with 60% of our, though no comparison between the two. ”

He pointed to the importance of pumping blood to revive and revive the middle class is part of the basis of the process of socio-economic reform value system in the country .. It is part of a set of social mobility trends constructive and positive .. and part of the withdrawal of the poor highest class .. and weaken the weird and sets the rich class .. and make it find an effective economic and social value to the ambitions partners and competitors in that one, which combines the conditions for success and progress in the society, “.anthy