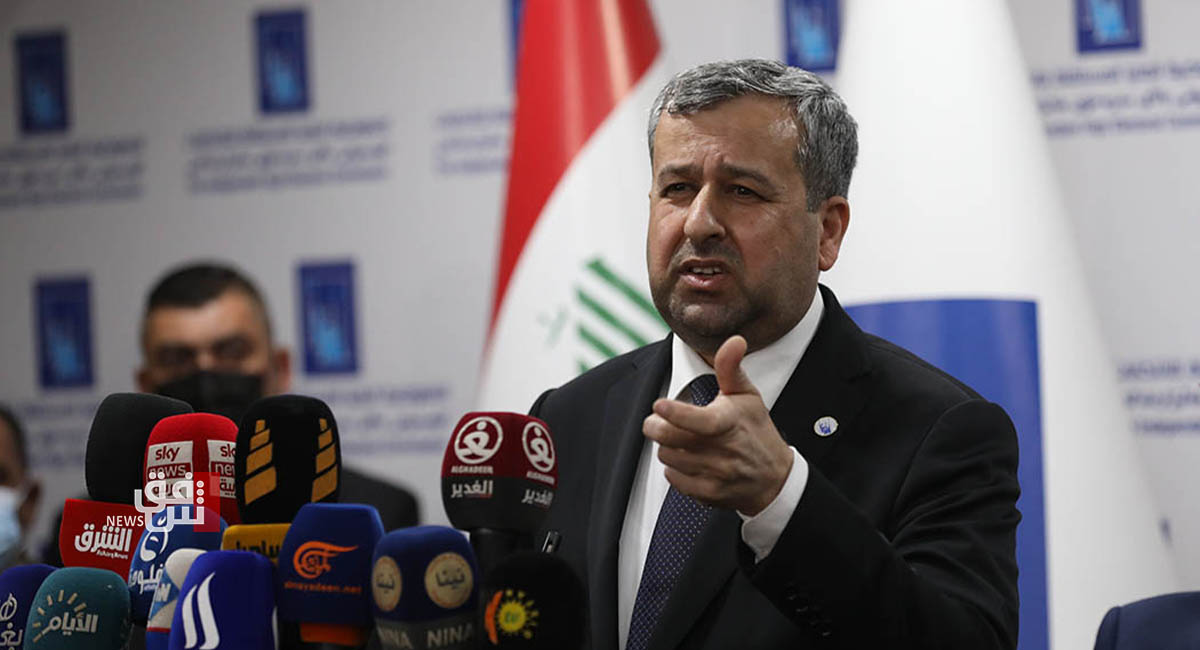 Shafaq News / The Independent High Electoral Commission in Iraq commented on Sunday that the Sadrist bloc’s representatives submitted their resignations from the parliament, while revealing a surprise about the replacements who will take their place in the parliament.

The resignation of the Sadrist bloc’s deputies came in response to an invitation addressed to them by the leader of the Sadrist movement, Muqtada al-Sadr, where Parliament Speaker Muhammad al-Halbousi signed the resignations, in the presence of the head of the parliamentary bloc, Hassan al-Adhari.

An official source in the Electoral Commission told Shafaq News, “The commission has not received, until now, anything official regarding the resignation of the Sadrist bloc’s deputies, in order to present their replacements to the Parliament, for the purpose of taking the constitutional oath.”

The source added, “The replacements of the Sadrist bloc’s representatives will be the highest losers in the electoral district, regardless of the candidate’s affiliation with any bloc,” noting that “the election law confirmed that the replacement of any representative is the one who comes next with the highest votes, away from the bloc to which he belongs.”

He pointed out that “the Commission will collect the names and numbers of the Sadrist bloc’s replacements, as they are not yet known, and this matter needs time, and after receiving the resignation of the representatives officially, to search for replacements in each electoral district from which a Sadrist bloc representative resigned.”

Today, Monday, Muhammad Jaafar al-Sadr announced his withdrawal from the candidacy for the position of Prime Minister.

Al-Sadr said, in a tweet via Twitter: “I accepted Al-Sadr’s candidacy (his shadow) in support of his national reform project, and now is the time to apologize and withdraw.”
He added, “Thank you to Al-Sadr and the National Salvation Alliance for their trust.”
The leader of the Sadrist movement, Muqtada al-Sadr, had directed the head of the Sadrist bloc, Hassan al-Adhari, to submit the resignations of the members of his bloc to Parliament Speaker Muhammad al-Halbousi, who in turn approved them. Ended 29 / h

Last Wednesday, the Iraqi parliament approved the “Emergency Support for Food Security and Development” law, for which 25 trillion Iraqi dinars were allocated (about 17 billion dollars), and the law allocated 4 trillion dinars (about 2.7 billion dollars) to pay off external and import debts. And the purchase of gas and energy, as Iraq owes Iran “the amount of 1.6 billion dollars for gas dues.”
Payment of financial dues
The Governor of the Central Bank of Iraq, Mustafa Ghaleb Makheef, had received, last Monday, Iran’s ambassador to Iraq, Muhammad Kazem Al Sadiq. During the meeting, they discussed aspects of banking and economic cooperation between the two countries, paying the financial dues owed by Iraq, and overcoming the obstacles facing the work of Iranian companies in the country.
In this context, Prime Minister Mustafa Al-Kazemi said, “One of the problems that affected the delay in the payment of dues to Iran is the absence of the budget.” He stressed that “these outstanding debts were before 2020, and therefore the supply was reduced, but Iran promised to solve the issue and return our gas needs in the coming days.”

Al-Kazemi had cleared the responsibility of his government, which was formed in May 2020, from Iran’s gas debt, amounting to about $1.6 billion. He said, “There are no debts owed by the current government regarding Iranian gas.”
The Ministry of Electricity confirmed an increase in gas emissions supplied from Iran by 5 million cubic meters per day, noting that the Iranian side touched Iraq’s seriousness in dealing and notifying public opinion, the government and Parliament of the need to pay the dues. The Finance Committee of the Iraqi Parliament had announced the allocation of the necessary funds to pay the Iranian debts due to the supply of gas to Iraq.

Tehran is resorting to reducing supplies of natural gas due to Baghdad’s failure to pay the accumulated debts for the purchase of gas, which are estimated at 1.6 billion dollars. Iraq produces between 19 and 21 thousand megawatts of electrical energy, while the actual need exceeds 30 thousand, which leads to a decrease in the hours of supplying electricity to citizens, especially in the summer, when Iraq is witnessing a rise in temperatures that exceeds in some days more than 50 degrees Celsius. , where the reduced hours of supplying citizens with electricity generated large popular protests.
Increase in gas emissions from Iran
During the past two years, Iraq resorted to opening talks with Arab countries and Turkey to import electricity from them. Last Tuesday, the Ministry of Electricity confirmed an increase in gas emissions supplied from Iran by 5 million cubic meters per day, noting that the increase led to an improvement in processing hours.
On June 1, the Iraqi Ministry of Electricity announced that the Iranian side had reduced the supply of gas to Iraq, which caused a reduction in processing hours.

Ministry spokesman Ahmed Moussa said, “After the increase in Iranian gas, the full payments became about 35 million cubic meters per day, which contributed to adding generating capacities to the national system and improving processing hours.”

{Politics: Al-Furat News} The independent politician, Ibrahim Al-Dulaimi, revealed the request of the Kurds and Sunnis, the leader of the Sadrist movement, Muqtada Al-Sadr, to wait to dismiss the Sadrist bloc from the House of Representatives.

Al Dulaimi said; For the (Unannounced) program broadcast by Al-Furat satellite channel on Sunday evening, that: “The resignation of the Sadrist representatives was expected through the assurances of Mr. Muqtada that he would not go to a consensual government, even if it cost him to resign from the political process, and there was no agreement between the Kurds and Sunnis with Mr. Muqtada al-Sadr. about his deputies submitting his resignation today.
Al-Dulaimi described the upcoming one as “the worst, and the political blockage will be harsh on the blocs and the Iraqis,” noting that “the viewpoint of the coordination framework is respectable, but we have always called for rapprochement to not reach this result, and the Sadrist movement can be a strong opponent of the government.”
Regarding the expected scenario in the next stage, Al-Dailami said, “

A statement by his office, of which Al-Furat News received a copy, stated that Al-Halbousi went to the Hashemite Kingdom of Jordan at the head of a parliamentary delegation at the invitation of the Speaker of the Jordanian Parliament.

He indicated that Al-Halbousi will meet Jordan’s King Abdullah II and senior officials in the kingdom.

Baghdad / Obelisk: Legal expert Jamal Al-Asadi told Al-Masala, Sunday, June 12, 2022, that the matter does not require deputies to vote on these resignations, and the Speaker of Parliament cannot legally reject the resignations of deputies of the Sadrist bloc.

He added that the parliament’s approval of the resignation of the representatives only gives them the right to retire, and this includes every deputy who has been in the parliamentary session for more than a year, and the Sadrist bloc’s submission of their resignation does not affect the work of the parliament, as there are substitutes who will rise in their place, and the substitutes are the biggest loser in the number of votes of any block.

On Sunday, the leader of the Sadrist movement, Muqtada al-Sadr, directed the representatives of the Sadrist bloc in the Iraqi Parliament to hand over their resignations to the Speaker of the Council, Muhammad al-Halbousi.

Al-Sadr added that this step is considered a sacrifice from me for the sake of the homeland and the people to rid them of the unknown fate, as we sacrificed previously for the liberation of Iraq, its sovereignty, security, unity and stability.

The head of the Sovereignty Alliance, Khamis al-Khanjar, revealed the details of the phone call he made with the leader of the Sadrist movement, Muqtada al-Sadr.
Al-Khanjar wrote in a tweet via Twitter, followed by Mawazine News: “He received a phone call from Mr. Muqtada al-Sadr, and I expressed my full respect and appreciation for the great sacrifice made by the Sadrist movement for the sake of the homeland and reforming the political process.”
And he stressed, “Addressing the sins of the political system in Iraq is a national necessity on which we agree with everyone who believes in the homeland, and we will continue our dialogues for this goal.” Ended 29/p. 87

Shafaq News/ The resignation of lawmakers cannot be revoked by a parliamentary voting or the rejection of the parliament speaker, legal expert Jamal al-Asadi said on Sunday.

The members of the Sadrist bloc in the Iraqi parliament resigned en masse following a statement by the leader of the Sadrist movement, Muqtada al-Sadr, earlier today.

“It does not need a voting to approve those resignations. The parliament speaker cannot deny them either,” al-Asadi told Shafaq News Agency.

“Their resignation awards them the right to retire. This, however, applies to the lawmakers who have completed a year in the parliament,” he continued, “the resignation of the Sadrist movement does not impact the work of the legislative body. They will be replaced by the candidates who secured the next highest number of votes in the October 10 election.”

Earlier today, the maverick Shiite cleric Muqtada al-Sadr instructed the lawmakers affiliated with his movement to submit their resignation letters in a culmination of the bitter row with rival Shiite Coordination Framework over the formation of a new government in Iraq.

In a hand-written note appended by his signature, al-Sadr said, “the head of the bloc Hasan al-Azzari shall submit the resignation letters of the sisters and brothers in the bloc, with ultimate gratitude for what they did during this short period.”

Al-Sadr also extended greetings to his cousin Jaafar al-Sadr, the Iraqi ambassador to London and the Sadrist candidate for the premiership, and his allies in the trilateral “Homeland Rescue” Coalition “for the patriotism and fortitude they exhibited.”

“You are relieved from me,” he addressed the Kurdistan Democratic Party (KDP) and al-Siyada bloc.

The unorthodox populist leader ascribed his decision as a “sacrifice to salvage the Iraqis from an unknown fate; as we did earlier to liberate Iraq and its sovereignty, security, unity, and stability.”

“Homeland comes first. I declare myself innocent before you and my people,” he concluded.