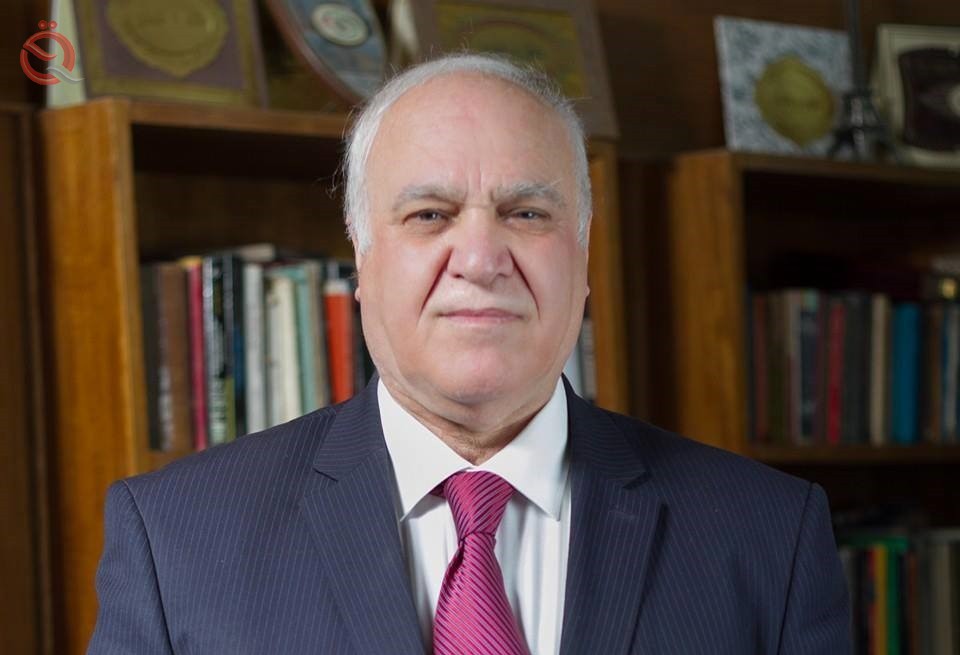 The financial advisor to the Prime Minister, Mazhar Muhammad Salih, proposed, on Saturday, to raise the volume of investment in 6 sectors to double growth rates, and while detailing employment rates in 3 vital sectors, he identified the reasons for their decline.

Saleh said, to the official news agency, that “Iraq has put at the forefront of its priorities seeking to enter the prospects of development and accelerated development to transcend the stage of the rentier economy or the mono-economy, as crude oil still constitutes the largest weight in the components of the gross domestic product.”

He added, “The crude oil extractive industry sector still accounts for more than half of the contribution to the country’s GDP, as oil revenues remain the major lever to finance investment and development in the sectors targeted by the country’s development plans.”

He continued, “This means that there are clear structural imbalances and low productivity polarizations in the agricultural and industrial transformational sectors in the interest of human concentration working in the service sector with low productivity and coexisting on the outputs of the rentier sector returns in the economy.”

Saleh explained that “the five-year and ten-year economic and social development plans are the ones that determine the sectoral and overall growth rates in order to bring about a fundamental change in the contribution of the vital productive sectors other than the crude oil sector to the gross domestic product, which is what is called diversifying the production structure of the overall economy.”

The Prime Minister’s advisor, proposing solutions, pointed to the “importance of changing production patterns and their components in employing labor and investing in national capital for the benefit of the real vital sectors, starting from maximizing the role of the agricultural sector in the gross domestic product and ending with the manufacturing industry and digital services, without forgetting that there is a major restriction on That diversification is represented by the consistent initiation of investment in physical and institutional infrastructure.”

He stressed that “the growth in the various sectors increases by a double rate whenever the rates of investment in the infrastructure of the economy increase, especially the six sectors: electricity, water, transport, communications, education and health. Thus, nations progress, provided that the development management is joint between state programs and private sector programs in an integrated manner.”

{Economic: Al Furat News} OPEC revealed the share of Iraq’s oil production, which will reach 4.509 million barrels per day during the month of June, after agreeing to increase 432 thousand barrels per day.

She noted that “the production of Saudi Arabia and Russia was set at 10.663 million barrels per day for each of them during the month of June, an increase of about 114 thousand barrels per day over the current month of May.”

Technical Adviser to the Prime Minister Haitham al-Jubouri confirmed that the legislation of the oil and gas law has become an urgent necessity to end the intersections between the federal government and the Kurdistan Regional Government in the oil file, and while he pointed out that the government is able to send the 2022 budget to the House of Representatives if it obtains a parliamentary vote authorizing it to do so. price per barrel of oil.
Al-Jubouri said, “The Federal Court’s decision that the oil and gas law in the region is unconstitutional obligates all parties concerned to implement it.”
He added, “There is no way or option for the federal government and the Kurdistan Regional Government but to implement the decision, and it can be implemented through options, including the legislation of the oil and gas law, or the development of paragraphs that include constitutional and legal deadlines in the budget law if it is legislated.”
He emphasized that “
On the budget file, al-Jubouri indicated that “the government is ready to present the 2022 draft budget in the event that the House of Representatives votes, authorizing it to send the law to the legislative authority, and the Ministry of Finance completed the initial draft after holding several meetings with the ministries.”
On the price of a barrel of oil in the budget, he said, “The current selling price in global markets, which exceeds 100 dollars, cannot be adopted because it was built on global crises such as the Russian-Ukrainian war and made it a price for a whole year in the budget. I believe that setting a price ranging between 60-70 dollars is a safe price.” and realistic.”
Regarding the closest option to verifying between budget legislation or voting on the emergency support law, al-Jubouri indicated that “the government’s completion of the budget and sending it to the parliament for discussion requires a significant period between 3-4 months, and the best is to legislate the emergency support law to provide strategic storage for foodstuffs and pay some debts. Iraq must pay the gas dues to ensure the sustainability of the supply of electric power, and it can be approved in one parliamentary session.” Ended 29 / p. 87

Shafaq News/ A group of independent deputies will hold a special parliamentary meeting tomorrow, Sunday, to discuss the initiatives put forward by the two sides of the Shiite conflict, the coordination framework and the Sadrist bloc, to determine their compass, which in turn will determine their subsequent steps, accompanied by some demands that will achieve the desired change in the overall political process .

Independent MP Adnan Al-Jabri told Shafak News Agency, “Most of the independent representatives will hold a meeting tomorrow to deliberate among themselves on the last two initiatives that were put forward by the Coordination Framework Forces and Muqtada al-Sadr.”

He pointed out that “most of the independent representatives tend to go towards the opposition, while others believe that confronting the political scene and forming an independent national government that meets the aspirations of the street, but according to demands that may not appeal to the owners of the initiative.”

He added, “We seek a comprehensive reform of all presidencies, including the parliament, along with the withdrawal of presidential candidates, and otherwise any reform will be partial, we will not go with it,” expressing his hope that “tomorrow’s meeting will discuss all the details and proposals for solutions to get out of the political closure.”

Al-Jabri added, “The independents must take responsibility by coming up with a working paper or an initiative that is presented to all political forces and blocs, which we hope will resolve the political crisis,” adding that “the upcoming meeting will inevitably come out with a set of recommendations that will be announced later.”

He stressed that “it is not easy to gather the independents and unify their visions in their approach, given that each of them has his own opinion or position, noting that some deputies have previously defined their positions as having attended the election sessions for the President of the Republic with an incomplete quorum, and their total does not exceed 25 deputies, nine from the extension movement , and like them from the new generation, four independents, and two from the Tasmeem movement.”

He continued, “In the sense that the other independents, who number more than 17 deputies, are the ones who support comprehensive change and correcting the course of the political process as a whole, not just the cabinet. They are also looking and wanting to limit the scope of the powers of the Prime Minister, who will be tasked with forming the government and choosing his ministry according to specific criteria.”

Al-Jabri pointed out that “the demands to correct the course of the comprehensive political process are supported by some of the deputies of the Independent Iraq Alliance and the radiance of Kanon, as well as some independents and others.”

He pointed out that “realizing the demand of the leader of the Sadrist movement, Muqtada al-Sadr, according to his recent initiative to form a parliamentary bloc of independents of no less than 40 deputies, is difficult and difficult.”

The independent MP, Hassan Al-Khafaji, revealed to Shafak News Agency earlier about a meeting that the independent representatives will hold to discuss the initiatives of the coordination framework and the Sadrist movement and to come up with a solution to end the political blockage.

He added, “The parliamentary meeting will discuss the paragraphs of the proposed initiatives, using the experiences of some advisors, and we will inevitably come up with outputs that may contribute to determining our next destination, whether to go with the initiative of the leader of the Sadrist movement or with the coordination framework initiative.”

The leader of the Sadrist movement, Muqtada al-Sadr, had put forward earlier today an initiative calling on independent parliamentarians to form an independent bloc to form the government away from the coordination framework.

It is noteworthy that the coordination framework put forward last week an initiative that included some requirements for entering into new alliances to form a government.

Baghdad / Obelisk: The Presidents of the Republic, Barham Salih, and the Council of Ministers, Mustafa Al-Kazemi, stressed, on Saturday, May 7, 2022, the need to close ranks in the face of challenges.

A presidential statement received by Al-Masala stated that the President of the Republic, Barham Salih, and Prime Minister Mustafa Al-Kazemi, and during the meeting, the general situation in the country was discussed.

According to the statement, the two sides stressed the importance of consolidating security and stability, chasing down terrorist remnants and blocking its attempts to target the security of citizens, in addition to the need to provide all support to the security forces in carrying out their important tasks in this regard.

They stressed the importance of solidarity, the consolidation of the national ranks and the strengthening of the internal front in facing the various challenges facing the country, supporting dialogue in resolving outstanding issues and moving towards meeting the national entitlements awaiting the country, focusing on the needs of citizens and improving living and service conditions, and the need to secure Iraq’s security, stability and sovereignty.

Al-Sabri added, in an interview with the official newspaper “Al-Sabah”, which was followed by “Mawazine News”, that “the demand of the independent leader of the Sadrist movement, Muqtada Al-Sadr, for a national and serious stance towards the political process, resulted in many opinions from the independents, followed by a meeting for them to unite the ranks to come out with a unified position, and to work on This issue is taken with real steps and guarantees towards the real goal to get out of this political impasse.”

{Economic: Al Furat News} OPEC revealed the share of Iraq’s oil production, which will reach 4.509 million barrels per day during the month of June, after agreeing to increase 432 thousand barrels per day.

She noted that “the production of Saudi Arabia and Russia was set at 10.663 million barrels per day for each of them during the month of June, an increase of about 114 thousand barrels per day over the current month of May.”