The leader of the Azm Mishaan al-Jubouri coalition revealed, on Thursday, the details of a meeting of the coalition, in the presence of 12 deputies.

Al-Jubouri said in a blog post followed by “Nass” (January 6, 2022): “We have now exited from a meeting of Representatives of Azm attended by 12 deputies, during which we renewed our confidence in Sheikh Khamis al-Khanjar, and reconfirmed our previous mandate to him on everything related to naming the presidencies and the government.”

He added, “During the meeting, we supported his agreement with the progress of the renewal of Al-Halbousi’s presidency, and we also rejected any measures targeting the leadership of Al-Khanjar Azm.”

The “Al-Azm” coalition led by Khamis al-Khanjar commented earlier on the news that a “crack” had occurred in the alliance and the “exclusion” of its leader and the inauguration of Muthanna al-Samarrai as his replacement, while talking about conditions for relinquishing the presidency.

The leader of the coalition, Muhammad Nimri al-Abedrabba, said in a statement: “Political preparations in Iraq need days, and usually the last days’ dialogues are the separator.”

What about the news of the “exclusion” of the dagger from the presidency?

Al-Abdarbuh commented on the news about the removal of Al-Khanjar from the leadership of the coalition, saying: “This is a media talk, and we issued a statement that Al-Khanjar is the leader of the coalition and the talk was just propaganda, and Muthanna Al-Samarrai was part of the meeting and remained supportive of the continuation of the alliance and the idea of ​​the alliance, and the reality of the situation is completely nothing about What is mentioned.”

He added, “What happened was due to the presence of the dagger outside Iraq, and the opportunity was exploited by some parties. Yesterday at night there was nothing. When we woke up in the morning, we found a tornado. Muthanna al-Samarrai, Abu Mazen, Thabet al-Absi and al-Khanjar.

Appointed to the ministries and the presidency of the parliament

Al-Abdarbuh answered a question regarding the statement of the latter coalition and the possibility of it being an invitation to enter into an alliance with “Al-Azm”, saying: “It is possible that we form an alliance with Taqaddam, and we discussed this matter briefly during today’s meeting in Al-Azm Alliance.”

He added, “The differences between the coordination framework and the Sadrist bloc is the prime minister, and the dispute between determination and progress is the presidency of the parliament, and if we agree and provide details from the presidency to something less than that, then we can go together, and understandings may occur between us, but so far it has not happened.” any understandings.

Earth News/ Early on Thursday, a political source announced the announcement of an alliance between “Azm al-Khanjar” and an alliance of progress headed by Muhammad al-Halbousi.

The source told Earth News; The two alliances merged into one alliance, and it will be registered with the Electoral Commission before next Sunday’s session.

The Azm Alliance, headed by Khamis al-Khanjar, suffers from schisms that have led a number of its members to cut al-Khanjar from the leadership of the coalition.

As he called for the advance of the dagger to join him in one alliance.

Shafaq News/ Prime Minister Al-Kazemi met on Thursday, the leader of the Sadrist movement, Muqtada al-Sadr, at the latter’s headquarters in Al-Hanana in Najaf Governorate.

The meeting comes in the midst of political discussions between the Sadrist bloc, which won the most seats in the elections, and other forces, to form the new government.

According to the leaks, Al-Kazemi’s name is among other candidates that Al-Sadr presented to the political forces to form the government.

This visit comes two days after Al-Kazemi approved the resignation of the governor of Najaf, Louay Al-Yasiri, and assigning the first deputy governor, Hashem Al-Karaawi, to run the province. 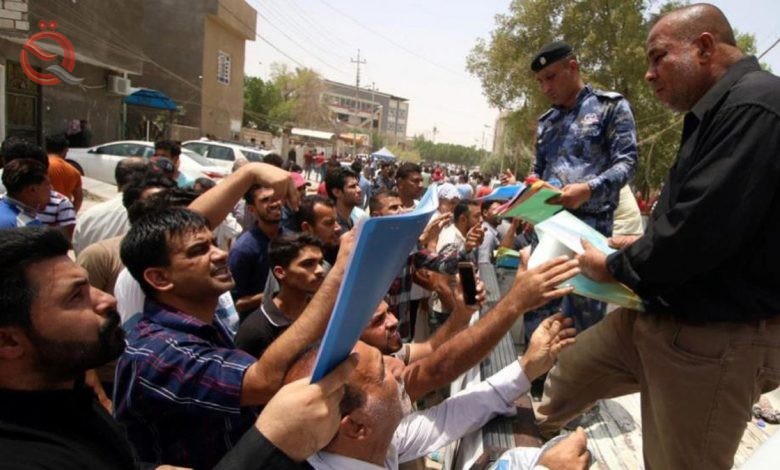 The credit rating agency, Fitch, reported that three Arab countries, including Iraq, experienced an increase in unemployment with the advent of the Covid-19 pandemic, which worsened the situation in them.

Fitch said; Youth unemployment and the lack of economic opportunities for them with a growing population represents a major policy challenge and a threat to political and social stability in most countries in the Middle East and North Africa.

She pointed to the growth of demographic challenges since the outbreak of the events of the Arab Spring (2010-2011), which partly reflects the grievances of young people who are deprived of their rights, indicating that with the advent of the Covid-19 pandemic, conditions have worsened, and the already high unemployment rates have increased in Iraq, Jordan and Morocco.

Fitch added in a report seen by Shafak News Agency; The growth of real GDP per capita was weak in all countries of the region except for Egypt and Morocco, and labor force participation rates declined, in a trend that preceded the spread of Corona in Egypt, Morocco and Jordan.

It showed that demographics has a multi-faceted impact on sovereign ratings, as high population growth rates promote growth and thus exert a downward force on government debt dynamics, as is the case in Egypt. However, the failure of economic growth to exceed the growth rate of the labor force can lead It leads to high unemployment rates and stagnant living standards, which increases the risks of social and political instability.

She explained that the need to contain social stability risks often leads to increased government spending on public sector employment and provision of subsidies, which leads to wider deficits and a tighter spending structure, noting that this approach succeeded in containing youth unemployment in Tunisia to some extent over the decade. The past, but culminated in debt sustainability and politically intractable financing challenges.

The Secretary-General of the Organization of Petroleum Exporting Countries (OPEC), Muhammad Barikindo, arrived in the capital, Baghdad.

According to a statement by the Ministry of Oil, Mawazine News received a copy of it, a visit during Barikindo’s visit to Baghdad will meet with a number of officials in the ministry and government, as well as a visit to a number of historical sites and religious shrines, and the building of the People’s Hall in Baghdad, which hosted the founding meeting of the organization in 1961. Ended 29 March 77

Baghdad / Obelisk: The obelisk publishes, Thursday, January 6, 2022, the most important statement of Prime Minister Mustafa Al-Kazemi during his expanded meeting with the directors of service departments in Najaf Governorate:

– Said to be in Najaf Governorate, the city of the Commander of the Faithful, religious references, and a great historical legacy. This province needs a special status because of its privacy.

– Our visit to Najaf Governorate is purely administrative and not of a political nature, but rather to see its conditions and help in providing services to its people.

– I brought in a large ministerial team to make quick decisions; In order to solve problems, overcome challenges, and support the governorate with what it needs.

– I will be a supervisor and a follower of the affairs of Najaf Governorate, and the ministers have been directed to make efforts and overcome obstacles in front of what the governorate needs.

– We are working to establish a special fund in Najaf to contribute to the development of the province, and the implementation of various projects in it.

– We instructed the competent government agencies to form a special municipality in the old city of Najaf Governorate, and a decision was issued to define the boundaries of this municipality due to its sacred and historical nature and to preserve the city’s history and heritage and not distort it.

– We instructed to choose the director of the old municipality of Najaf under special conditions.

It was directed to solve the problem of lecturers in the 2022 budget.

– We instructed the Ministry of Construction, Housing, Municipalities and Public Works to find solutions to the problem of water and sewage, and to connect the highway and the land pilgrimage route.

Media Office of the Prime Minister

Baghdad / Obelisk: The President of the Republic, Barham Salih, and the US Ambassador to Iraq Matthew Tueller stressed, on Thursday, January 6, 2022, the need to reduce tensions in the region.

A statement by the Presidency of the Republic, followed by the obelisk, stated that “President Saleh received today, Thursday, January 6, 2022, the American ambassador to Iraq, Matthew Tueller.”

The statement added, “The meeting discussed the bilateral relations that unite the two countries, and their strengthening in various political, economic, cultural and environmental fields through the existing strategic dialogue between the two countries.”

He pointed out that “the meeting dealt with developments on the regional arena of mutual interest, stressing the need to establish peace in the region and ease the tensions surrounding it through dialogue, and the importance of Iraq’s pivotal role in the region.”

Shafaq News/ On Thursday, the United States of America renewed its commitment to support Iraq and to continue the strategic partnership between the two countries.

This came in a statement issued by the US Embassy in Baghdad on the occasion of the 101st anniversary of the founding of the Iraqi army.

“We join our Iraqi friends and partners in honoring the service and sacrifice of the Iraqi security forces, including the Peshmerga, and applaud the extraordinary progress they have made in the fight against ISIS remnants,” the statement said.

According to the statement, “the United States remains deeply committed to its multifaceted strategic partnership with Iraq, working with its Iraqi friends and partners to continue building a stable, prosperous, democratic, and united Iraq.”

And the Iranian “Farda” radio website stated that “hours after the erection of a statue of the commander of the Quds Force, General Qassem Soleimani, in the city of Shahr Kurd, young men burned this statue.”

The website indicated, according to a video clip circulated on the communication platforms, that “the statue of Qassem Soleimani, which was built within a year at a cost of 150 million tomans (5,000 US dollars), caught fire, a few hours after it was installed in Qamar Bani Hashem Square in the month of Kurd.”

For his part, the representative of the Iranian Supreme Leader Ali Khamenei in the province of Chahar Mahal and Bakhtiari described the burning of the statue of Qassem Soleimani, as a “crime.”

“This crime is like the night crime at Baghdad airport, which occurred in the privacy of the night and at the height of cowardice,” Muhammad Ali Nekonam, the Friday prayer leader in the month of Kard, said in a statement after the incident.

The burning of the statue of Soleimani in the month of Kord, western Iran, coincided with the occasion of the second anniversary of the assassination of Soleimani, along with the leader of the Iraqi Popular Mobilization Abu Mahdi Al-Muhandis, by a US drone near Baghdad Airport, at dawn on January 3, 2020.