And the official Emirates News Agency and its follower, Nass, (November 25, 2021), reported, “Al Nahyan and Mustafa Al-Kazemi discussed, during the call, the fraternal relations that unite the United Arab Emirates and the Republic of Iraq, and the importance of developing their joint cooperation, and expanding its horizons to include various areas that achieve their interests.” reciprocal and for the benefit of their peoples.

According to the agency, the two sides exchanged “views on a number of issues and files of concern to the two countries and their overall developments, in addition to developments in the region and efforts and endeavors to enhance its security, stability and development.”

Shafaq News/ The leader of Al-Fateh Alliance Hadi Al-Amiri met on Thursday with the head of the United Nations Assistance Mission for Iraq “UNAMI” in the capital, Baghdad.

“During my meeting today with the head of the Al-Fateh Alliance Hadi Al-Amiri, we expressed our hope that the Independent High Electoral Commission and the Electoral Judicial Authority will independently consider all appeals related to the parliamentary elections,” Plasschaert said in a tweet on Twitter.

Plasschaert urged all parties to “find serious political solutions and form an inclusive government that meets the aspirations of the Iraqi people.”

For his part, Al-Amiri said during the meeting, according to a statement by his office, that “what concerns us and one of our first priorities is Iraq’s security and political stability, and we have made efforts to achieve this all our lives and youth in this way, so we reject everything that destabilizes or impedes its stability,” noting that “Our rejection of the results of the recent elections came from our belief that these results are catastrophic and will destabilize his security and stability and undermine the most important pillar of the democratic process, which is the election boxes.”

Al-Amiri added that “the refusal came out of our keenness on the democratic path and the peaceful exchange of power through the election boxes, which is the outcome of a long struggle and jihad for the Iraqi people against dictatorship, in which hundreds of thousands of martyrs, missing persons and the disabled were presented.”

Al-Amiri criticized “Plasschaert’s position on the High Electoral Commission, praising and defending it despite the many and great failures as a result of its poor management of the elections, its lack of credibility and transparency, and its repeated violations of the law.”

Al-Amiri also criticized Plasschaert’s “high praise for the technical side, despite the major failures in the devices,” wondering, “Does when we file appeals through legal and judicial methods, is it a threat to the Commission, as stated in your non-objective briefing to the Security Council?”

“Unfortunately, you did not act as a representative of the United Nations to help Iraq solve its problems according to the mission’s tasks, but you acted as a high representative, and this is what we reject altogether,” Al-Amiri said.

Al-Amiri concluded his speech to Plasschaert by saying, “We regret your unsuccessful speech, which complicated the electoral scene and torpedoed the political solution.”

This meeting comes in the wake of a violent attack launched by Al-Amiri on Blackshart against the backdrop of a briefing the latter gave to the UN Security Council, in which she said that there was no evidence of electoral fraud.

Yesterday, Wednesday, Al-Amiri said, during his meeting with the Ambassador of the European Union in Iraq, Phil Variola, “We have great cooperation and a good relationship with the United Nations mission, which we believe in its positive role, but our confidence has begun to be shaken due to the violations committed by the current head of mission, Jenin Plasschaert.”

He added that Blackshart “interfered in the elections and their results as if she was a high commissioner, and Iraq did not and will not accept any high commissioner and must abide by its specific duties.”

The “Al-Fatah” coalition, which is a political umbrella for the armed factions, was the most prominent loser in the recent elections by obtaining 16 seats, after it came second with 48 seats in the 2018 elections.

According to the preliminary results of the parliamentary elections that took place last month, the “Sadr bloc” of Shiite leader Muqtada al-Sadr came first with 73 seats out of 329.

Since the announcement of the preliminary results, Iraq has been experiencing political and security tensions, as a result of the rejection of the results by armed Shiite forces and factions, which they say are “fabricated”, and demand that all votes be recounted manually. 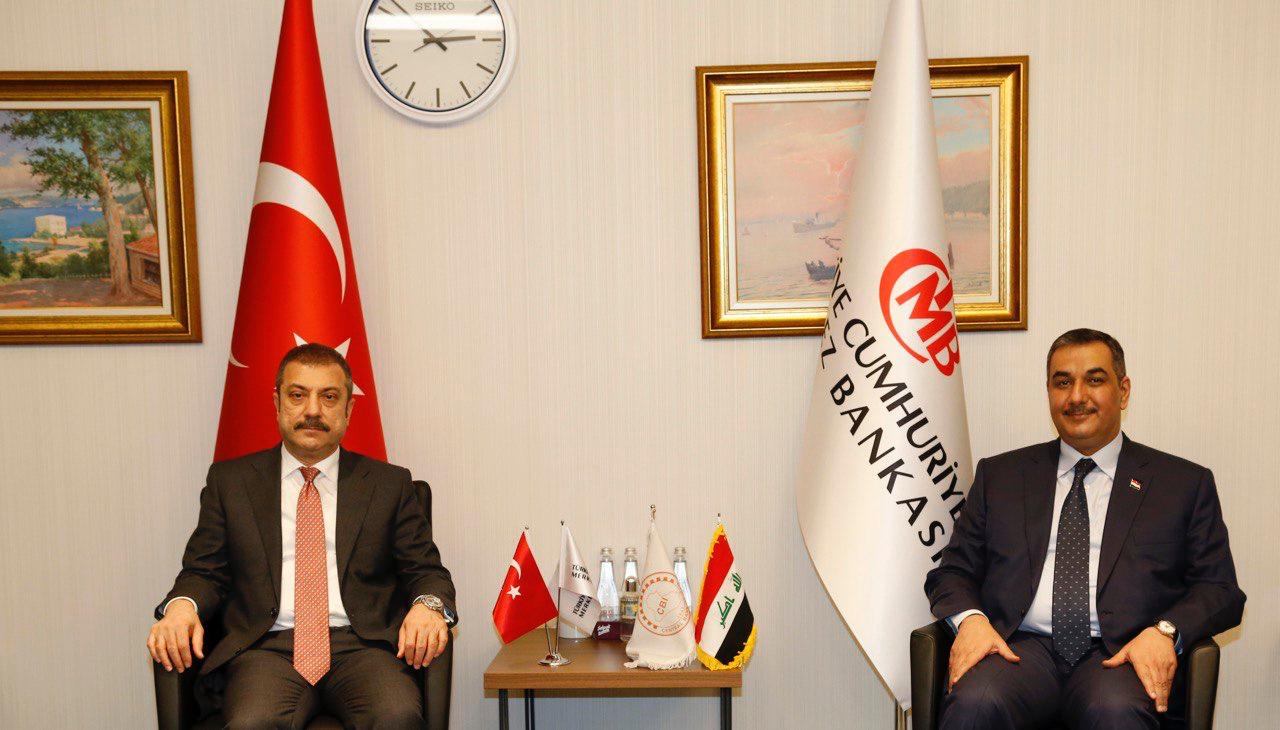 Today, Thursday, the Ministry of Commerce announced that Iraq has submitted a proposal to form an economic bloc of three countries, indicating that the goal is to compete with the economies of the world.

A spokesman for the Ministry of Commerce, Muhammad Hanoun, said in a statement to the official agency, followed by the “National News Center”, that “Iraq raised during the Economic Forum for Investment and Contracting in Turkey the importance of forming an economic bloc from the regional countries (Iraq, Turkey and Iran), indicating that” the aim of forming the bloc As an economic competitor that competes with the economies of the world because of the economic effects that these countries have.”

He added, “Iraq, through the Ministry of Trade, put forward an idea in Turkey to form an economic bloc,” noting that “it will be presented in the form of a proposal through the Council of Ministers or the Ministry of Foreign Affairs and our commercial attaches, and communication will be made with countries in order to exchange ideas, information and how to form the bloc. What are the qualifications for the ability to face problems?

Hannoun added that “the Ministry of Commerce seeks for the economy to lead the policy, and therefore the economy today is the engine of the world’s economies, explaining that” the first step began in Turkey and was an Iraqi message that the economy must play a key role in political engines and a protection tool. The region, through compatibility with other blocs, needs resources and wealth in the region.”

He stated that “Iraq possesses great and enormous wealth that allows it to be a major economic player,” pointing out that “there are problems that have had a dimension of economic backwardness and the lack of a clear economic vision. First, towards strengthening economic relations, and then towards the world.”

Hanoun stressed, “the need for Iraq to return to an important economic player, and all indicators allow it to be able to compete and enter into one of the important axes that run the wheel of the economy in the world,” noting that “the Iraqi delegation in Turkey stressed the need for international companies to enter Iraq to invest to build Factories, importing machines and equipment, relying on the national product, self-capacity, and rehabilitating banks, and this was discussed in Turkey to benefit from the Turkish expertise.”

He explained, “Iraq needs well-thought-out decisions that have the ability to change through an economic policy that allows it to benefit from its experiences and the competencies of its children.”“National

Baghdad / Obelisk: The World Bank warned Iraq, Thursday, November 25, 2021, that water will not reach a third of the irrigated lands in 2050, if the temperature rises by one degree Celsius, as expected.

The World Bank issued a report, stating that by 2050, the temperature will increase by 1 degree Celsius, and the precipitation will decrease by 10%, which would cause a decrease in available fresh water by about 20%, and under these conditions, the water will not reach Nearly a third of Iraq’s irrigated land by 2050.

He added that Iraq’s economic outlook has improved, against the backdrop of the recovery in global oil markets, as the gross domestic product is expected to grow from 2.6% in 2021 to more than 6% in 2022-2023. However, without accelerated economic reform, unforeseen domestic and financial risks can cause setbacks.

According to the report, the country’s economic recovery is partly supported by the government’s moves to work on previously recommended reforms, and public transfers, as well as plans to increase credit to businesses, had a small stimulus effect, leading to 0.9% GDP growth in the first half of 2021. , in contrast to a 16% contraction in the previous year.

Higher oil prices shifted the fiscal balance of 2.2% into GDP surplus, increasing central bank reserves to nearly $55 billion (15 months of imports) in the first half of 2021.

The recovery was curtailed somewhat by severe water shortages and widespread power cuts after historically low rainfall, affecting the agriculture and industrial sectors, and health care services also deteriorated amid a growing number of coronavirus cases.

Oil GDP, which remains the main driver of medium-term growth in Iraq, is expected to rise in conjunction with the phasing out of OPEC+ production quotas, while non-oil GDP growth is expected to remain below 3% in 2021-2023.

The World Bank stressed that it is important for Iraq to deal with water scarcity and the deteriorating water quality in rivers and groundwater, calling for radical reforms of the sector to seize opportunities and manage risks.

A 20% reduction in Iraq’s water supply and the associated crop yield reductions that may accompany climate change could reduce Iraq’s real GDP by as much as 4%, or $6.6 billion.

Shafaq News/ The Independent High Electoral Commission announced, on Thursday, the end of all manual counting and recounting, at the request of forces objecting to the preliminary results.

The commission stated in a statement that it had completed today, Thursday, the last stations of Nineveh Governorate, based on the decision of the Judicial Commission for Elections, in the presence of representatives of the contesting candidates, international observers and authorized media personnel.