Shafaq News / The Iraqi President, Barham Salih, confirmed on Wednesday that ensuring the elections scheduled for the tenth of next October and their integrity is a top priority, while noting that his country supports easing tensions in the region, as well as international coordination to confront climate change.

This came during Saleh’s meeting, at the United Nations Headquarters in New York, with the Secretary-General of the United Nations, Antonio Guterres, according to a statement issued by the Presidency of the Republic of Iraq and received by Shafaq News.

According to the statement, President Salih congratulated Guterres on his re-election as Secretary-General of the organization, and praised the great support provided by the United Nations to Iraq in various fields, and support in the electoral field and facilitating the task of sending observers for the integrity and transparency of the elections scheduled for October 10.

Saleh noted the importance of the upcoming elections for the Iraqi people and the need to provide the utmost integrity, justice and transparency in their conduct, stressing the need to “support efforts to consolidate the security and stability of Iraq and its people, and the importance of working to reduce tensions in the region, and restore Iraq to its pivotal role in it.”

The Iraqi president stressed the necessity of strengthening international solidarity in facing the challenges of the era represented in combating violence and terrorism, as well as facing the climate change crisis and protecting the environment, which has become an imminent threat to all humanity.

He pointed out that “Iraq is looking forward to international support and expertise in this regard in order to support its national plans for environmentally revitalizing Mesopotamia and to establish concepts of a green economy.”

For his part, Guerich praised “the progress made by Iraq, and its tireless efforts to ease regional tensions,” stressing that “the United Nations organization will continue to support Iraq and through its mission in the country and at the United Nations to support the security, stability and prosperity of the Iraqi people.”

Baghdad – Mawazine News
The Ministry of Foreign Affairs announced, on Wednesday, the formation of a committee of the foreign ministers of Iraq, Jordan and France in preparation for the upcoming Baghdad conference.
Foreign Ministry spokesman Ahmed Al-Sahaf said in a statement received by Mawazine News that “Foreign Minister Fouad Hussein chaired the meeting of foreign ministers of the participating countries to follow up on the outcomes of the Baghdad Conference for Cooperation and Partnership, on Tuesday, 9/21/21, at the headquarters of the permanent representation. The Republic of Iraq at the United Nations in New York, and in the presence of the Minister of Foreign Affairs of France, the Assistant Secretary-General of the United Nations for Political Affairs and Peacebuilding, the Secretary-General of the League of Arab States, the Secretary-General of the Organization of Islamic Cooperation, and the High Representative for Foreign Affairs and Security Policy of the European Union.
He added, “The meeting concluded with an agreement to form a tripartite ministerial committee from the foreign ministers of Iraq, Jordan and France to complete the preparations related to the agenda and objectives of the upcoming conference to be held in the Jordanian capital, Amman.” Ended 29/R77

The President of the Republic, Barham Salih, called, on Wednesday, for international coordination to confront the challenges of terrorism, health and the environment.
The Presidency of the Republic said in a statement, of which “Mawazine News” received a copy, that “Saleh received today at his residence in New York Cypriot President Nicos Anastasiades, to discuss bilateral relations and ways to enhance them in all fields, especially the economic, trade and investment aspects in various sectors, and the importance of coordination. To face the various challenges facing the region and the world, foremost of which is terrorism, and to enhance diplomatic, economic and cultural cooperation, and to commend what Cyprus offers to a number of Iraqi refugees.
Saleh pointed out, “Iraq attaches importance to protecting its sovereignty, security and stability, strengthening cooperation and interdependence in the fields of economy and trade, and renounce conflicts, noting that economic crises and the spread of the Corona pandemic and climate change require the international community to exert more efforts and coordination to overcome these conditions in an effort to consolidate the foundations of stability, peace and prosperity for peoples.”
For his part, Cypriot President Nicos Anastasiades confirmed the congruence of views with President Barham Salih’s proposal, stressing his country’s aspiration to support Iraq in various fields, and to enhance bilateral cooperation in various aspects. Ended 29/R77 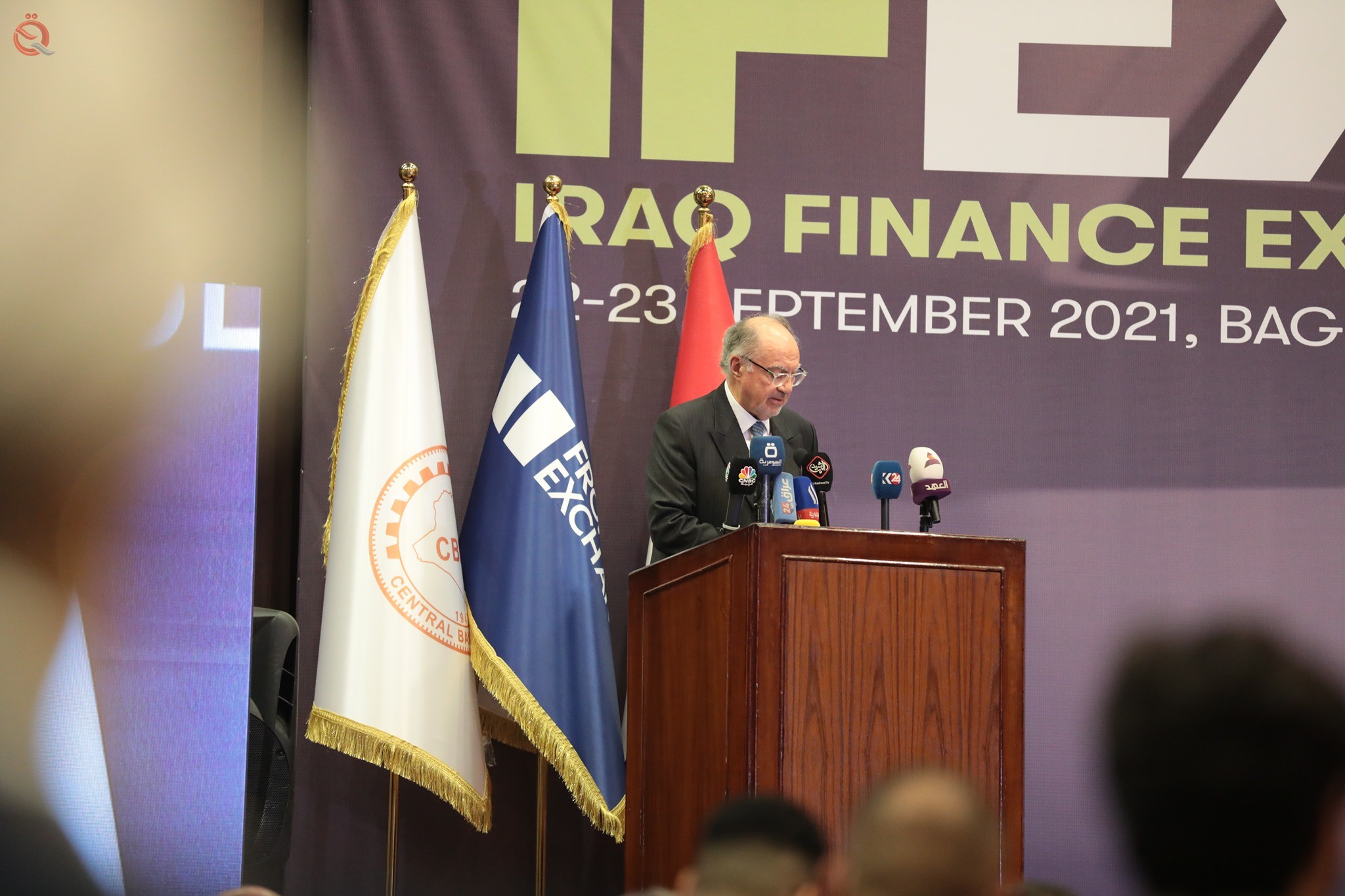 Finance Minister Ali Abdul-Amir Allawi confirmed, on Wednesday, that the collapse of oil prices caused a crisis in the Iraqi economy, and when the government assumed its duties, there was a billion dollars in its accounts, noting that the series of measures taken by the government led to the stability of economic conditions.
Allawi said in his speech during the annual finance and banking services conference, which was held in Baghdad and attended by “Al-Iqtisad News”, that the collapse of oil prices caused a crisis in the Iraqi economy, and when the government assumed its duties, there was a billion dollars in its accounts, and the financial surpluses of the previous year were spent on Excess expansion in the public sector.
He added that the government struggled to manage the subsequent effects of the economic and security crises, and the problems were exacerbated by the lack of a budget in 2020, the expansion of public sector obligations and previous accumulations, while we were trying to absorb employment obligations and pensions, and economic activity shrank sharply, noting that the Iraqi economy suffered from a decline. to 11% of GDP in 2020.
He explained that the series of measures taken by the government led to the stabilization of economic conditions, including the devaluation of the local currency, which had an important impact on the recovery of the domestic product, in addition to that, the price of oil began to recover in the fall of 2020, as it reached 62 dollars in the first eight months.
And he indicated that the 2021 budget was passed and our credit rating was preserved and the public sector payroll and pension obligations became more under control than before, noting that the government took the start of reform and put the reform of the public sector and the entire public administration and the white paper is the first real evidence to restore the prestige of the economy and we showed our serious determination to Issues that have been outstanding for years, through the provision of services and the ability to create good jobs for young people whose number is increasing by more than one million annually, and we still depend on oil revenues.
He noted that our financial sphere is constrained by a serious stagnation because the economy is not diversified and relies heavily on a single resource and a large degree of the state budget, the difficulty of creating jobs from the private sector, corruption is very high in all parts of the government and the political repercussions and public protests, although the government has reduced internal tensions And we promised to hold early elections and we will fulfill these promises on the tenth of next October, Iraq will vote to elect a new House of Representatives.
He stressed that the government approved major projects, including the G4 licensing rounds, the Total project, the Faw port, a number of renewable energy projects, and the Al-Bidaa Canal to pump water in Basra, which is the first water desalination project, and there are quite a few projects and initiatives launched by the government.
He added, “We have taken a new decision to subject large investments and are subject to scrutiny by the advisors of the relevant departments. As for the financial sector, we were able, in cooperation with the Central Bank, to control the side effects that resulted from the new exchange rate and the emergence of positive effects with the registration of requests for investment licenses and new industrial projects,” he added. The United Nations Trade Organization project to automate customs, as well as reform government banks, was approved.
Allawi said that Iraq is witnessing a good recovery during the year 2021, and in the medium term we must have positive results through the support of the International Monetary Fund for our reform program represented by the White Paper. Separating the future of Iraq from the massive technological changes and opportunities towards a digital economy. The digital economy will not lead to job creation, but rather contribute to a basic diversification of our economy. We need to develop the environment for the telecommunications sector, by creating a digital environment, supporting digital skills, creating digital platforms, digital financial services, and supporting pioneers Business and Finance Ministry is interested in the latter two aspects of the five pillars.
And he indicated that the Ministry of Finance is promoting a fund to support youth, and we have allocated 30 billion dinars in the 2021 budget, and work will begin in the coming weeks, and the adoption of high-speed and affordable Internet and the provision of government services. That country has to restore its economy to the global energy market, which is the main challenge.
He noted that the government launched a high-level committee on climate change and the environment, preparing a green paper and rationalizing us towards alternative energy.