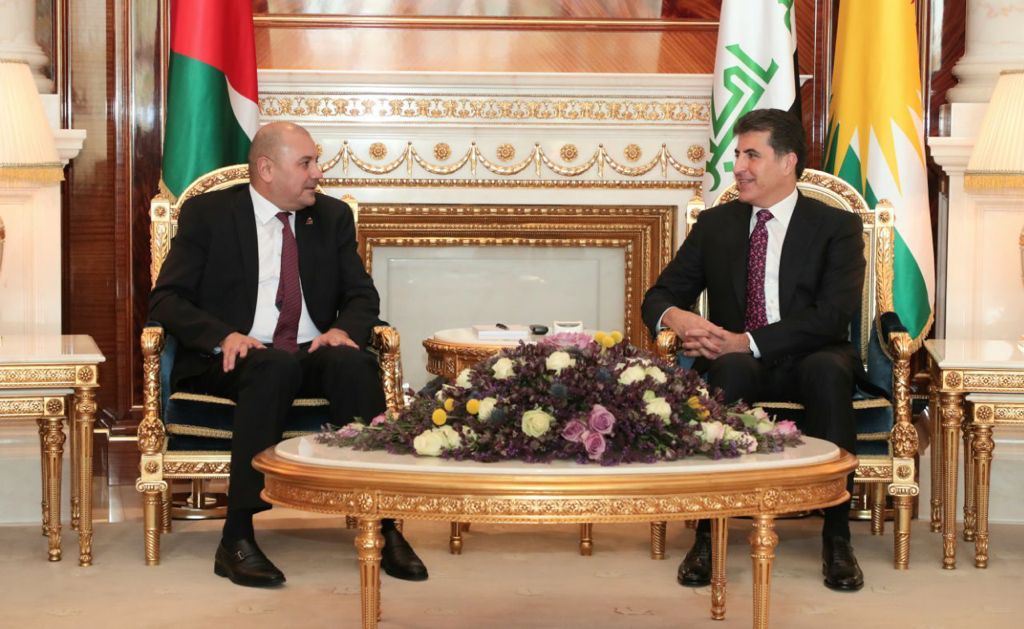 Shafaq News/ The President of Kurdistan Region, Nechirvan Barzani, on Saturday, expressed his thanks and gratitude to Jordanian King Abdullah II for his support of the region, while the Speaker of the Parliament of Jordan referred to the role and status of Kurdistan in maintaining balance and stability in Iraq and the region.

The Presidency of the Region said in a statement received by Shafaq News Agency, that the President of the Kurdistan Region, Nechirvan Barzani, received this afternoon, Abdul Moneim Al-Awdat, Speaker of the House of Representatives of the Hashemite Kingdom of Jordan, and an accompanying delegation.

The delegation spoke with interest, according to the statement, “about the role and position of the Kurdistan Region in the field of maintaining balance and stability at the level of Iraq and the region.”

For his part, President Nechirvan Barzani renewed his expression of thanks and gratitude to the Kurdistan Region for the continued support of King Abdullah II and Jordan, whether in difficult periods in the past or at the present, pointing to the Kurdistan Region’s desire to strengthen all aspects of relations with the Kingdom of Jordan.

The statement pointed out that “the political and security conditions in Iraq and the Kurdistan Region, the development of areas of cooperation and partnership, the upcoming Iraqi elections, the threat of terrorism and confronting ISIS, the Covid-19 epidemic and its repercussions, employment and investment opportunities in the region, Erbil-Baghdad relations and dialogue for its solution and a host of other issues that enjoy With mutual interest, it formed another focus of the meeting.”