Will you consider a small donation so we can continue to provide translated articles from Iraq & surrounding areas?

Baghdad / Obelisk: Prime Minister Mustafa Al-Kazemi begins a new important step, confirming his project aimed at making Iraq an important regional hub, seeking to find the greatest amount of consensus among the countries of the region, and to bring understanding and peace, instead of conflict and fighting.

Iraq launched invitations to neighboring countries to attend the summit, which aims to reduce tension in the region and focus efforts to combat terrorist groups.

On Monday, August 9, 2021, the King of Saudi Arabia, Salman bin Abdulaziz, received the invitation of Prime Minister Mustafa Al-Kazemi to attend the leaders of the countries neighboring Iraq.

In the event that the broad title of the summit matches reality, the President of the Syrian regime, Bashar al-Assad, will be invited to attend the summit, given that Syria is one of Iraq’s neighbors.

It is expected from the summit that Baghdad will strengthen its economic relations through it and enhance investment opportunities.

Assuming that the leaders of Turkey, Iran, Syria, Jordan, Saudi Arabia and Kuwait attend the summit, it will be a historic achievement for the Al-Kazemi government in a regional summit that the region has missed for decades.

Foreign Ministry spokesman Ahmed Al-Sahaf said in a statement, a copy of which was received by “Nass” (August 8, 2021), that “Foreign Minister Fouad Hussein meets with his Saudi counterpart Prince Faisal bin Farhan in Riyadh, and they discuss bilateral relations and ways to enhance them to achieve common interests, They also discussed regional and international issues of concern to the two brotherly countries, and the importance of concerted efforts to resolve the crises afflicting the region.

He added, “The minister delivered an invitation letter from Prime Minister Mustafa Al-Kazemi to the Saudi Foreign Minister addressed to the Custodian of the Two Holy Mosques, His Majesty King Salman bin Abdulaziz, regarding the meeting of the summit of Iraq’s neighbors to be held at the end of this month.”

Shafaq News/ The Iraqi government announced tomorrow, Monday, an official holiday on the occasion of the month of Muharram.

The General Secretariat of the Iraqi Council of Ministers said, in a statement received by Shafaq News Agency, that tomorrow, Monday, August 9, 2021, is an official holiday, to mark the beginning of the Hijri year, corresponding to the first of the holy month of Muharram, for the year 1443 AH.

And earlier, the Sunni Endowment in Iraq announced, tomorrow, Monday, the first of the sacred month of Muharram for the Hijri year 1443, except for a calendar issued by the office of the supreme religious authority, Ali al-Sistani, on Tuesday, which is the first of Muharram.

Muharram, the first month of the Islamic year, also includes rituals and ceremonies to commemorate the killing of Imam Hussein bin Ali, grandson of the Prophet Muhammad in 680 AD. 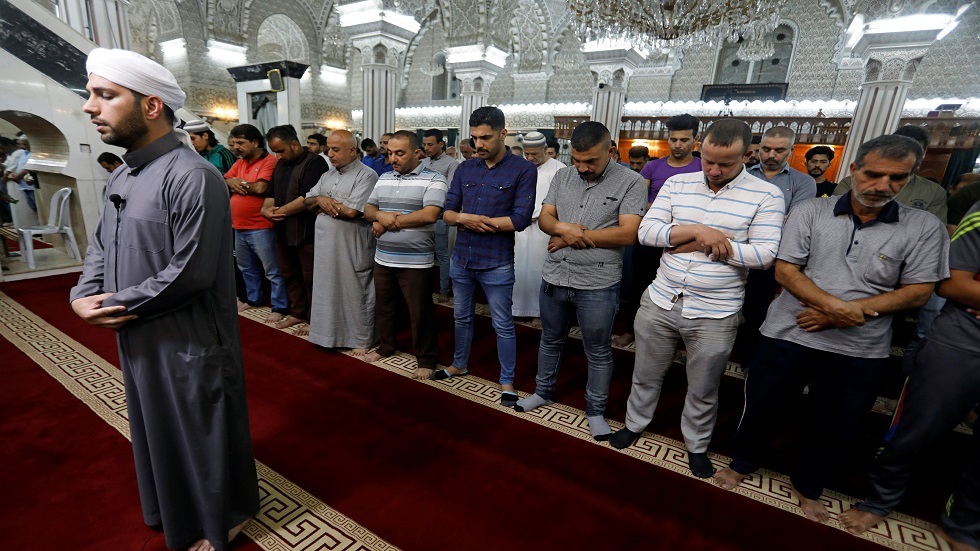 Shafaq News/ The Sunni Endowment Bureau in Iraq announced tomorrow, Monday, the 1st of Muharram for the Hijri year 1443.

And he said in a statement received by Shafaq News Agency, given that the sighting of the crescent has been proven in both legal and astronomical terms, the committee to determine the early Hijri months in the Sunni Endowment Bureau, we announce that tomorrow, Monday, August 9, 2021 is the first day of the first day of the holy month of Muharram.

Muharram, the first month of the Islamic year, also includes rituals and ceremonies to commemorate the killing of Imam Hussein bin Ali, grandson of the Prophet Muhammad in 680 AD.

The federal government in Iraq and its counterpart in the Kurdistan region in the north agreed, on Sunday, to “open a new page” for cooperation in the field of oil and gas, and to resolve previous differences in accordance with the law and the constitution.

This came during a meeting in Baghdad between Federal Oil Minister Ihsan Abdul-Jabbar and Kurdistan Regional Minister of Natural Resources Kamal al-Atrushi, according to a statement issued by the Iraqi Oil Ministry.

Previous agreements between the two parties regarding oil did not see the light of day, despite their announcement of agreement to resolve differences related to Erbil’s handing over of its oil to the federal government, in exchange for a share in the country’s budget .

The statement quoted Abdul-Jabbar as saying: “The federal government stresses the need to deal with high transparency with the management of oil wealth throughout Iraq, and to work to solve outstanding problems through dialogue, exchange and respect of viewpoints.”

The Minister of Oil expressed, according to the statement, his hope that “the meetings and dialogues with the region will open a new page of serious objective dialogue to resolve outstanding problems, and to serve the Iraqi people from north to south.”

For his part, the Minister of Natural Resources in the Kurdistan Region, Kamal al-Atrushi, stressed “the joint cooperation with the Ministry of Oil and the Federal Government, and working together to open new horizons in bilateral relations towards the optimal investment of national wealth.”

Baghdad – Mawazine News
, Minister of Finance Ali Abdul Amir Allawi stressed, on Sunday, the importance of adopting mechanisms and systematic steps, according to what was stated in the white paper.
And the Ministry’s media office stated in a statement, “The Minister of Finance, Abdul Amir Allawi, chaired the sixteenth session of the committee to prepare the budget strategy for the years 2022-2024, and in the presence of the head of the General Authority for Monitoring Federal Ministries’ allocations, the Undersecretary, the Prime Minister’s advisors, the ministry’s advisor, and a number of the ministry’s general directors.” .
He added, “During the session, a comprehensive report was presented on the strategic plans for the governorates: (Babylon, Anbar, Dhi Qar, and Wasit) and their future vision in the context of achieving economic development, activating the investment aspect in them, and supporting efforts to advance the service and infrastructure reality, provide job opportunities and reduce levels of employment. poverty in those provinces.
He continued, “The meeting discussed defining and discussing ceilings for oil and non-oil revenues, according to the report submitted by the head of the General Authority for Monitoring the allocations of the federal ministries.”
Allawi stressed, according to the statement, “the importance of adopting systematic mechanisms and steps in accordance with scientific frameworks, including according to what was stated in the economic reform paper (white paper). Ended 29 / h

Shafaq News/ The Parliamentary Foreign Committee revealed on Sunday the names of the Arab and foreign countries that will participate in the Baghdad summit.

Committee member Amer Al-Fayez told Shafaq News Agency, “Iraq seeks to take its regional and leadership position in the region, after the success of Iraqi diplomacy and work on security, political and economic stability in the regional region.”

He added that “there are about 10 countries that will participate in the regional summit in the capital, Baghdad, including Turkey, Iran, Saudi Arabia and other Arab countries, in addition to the participation of European countries and the United States of America.”

Al-Fayez said, “The regional summit will discuss controlling borders between countries, strengthening the security, political and economic aspects, resolving the water crisis and contributing to resolving differences between some countries in the region.”

And the Iraqi Foreign Ministry said in a statement received by Shafaq News Agency, that “Hussein handed the Turkish president an invitation letter from Prime Minister Mustafa Al-Kazemi to attend the summit meeting to be held in Baghdad at the end of this month at the level of leaders of Iraq’s neighboring countries.”

She added, “During the meeting, a number of issues related to bilateral relations and the situation in the region were discussed.”

A source in the Iraqi government revealed, to Shafaq News, earlier that Al-Kazemi is working to establish a regional summit in the capital, Baghdad.

The source also said that it is hoped that the countries surrounding Iraq will participate in this summit, in addition to Qatar, the UAE and Egypt, to be held after the middle of this month.

Al-Kazemi’s government has been working since taking power a year ago to restore Iraq’s relations with its Arab and regional surroundings, after the tension witnessed by previous governments.

Shafaq News/ National Security Adviser Qassem Al-Araji welcomed on Sunday the step of leaving the OTH forces of the coalition forces in Iraq and returning to their bases in Kuwait.

Al-Araji said in a tweet on “Twitter”, that the step came in response to the outcomes of the strategic dialogue between Iraq and America, and it is a confirmation of what was agreed upon, and the commitment and credibility of the two parties.

On Saturday, the international coalition reported that a special force belonging to it had left Iraq after completing its mission in that country.

In a statement received by Shafaq News Agency, the coalition said that the coalition’s OTH force recently completed its mission in Iraq and returned to its original base in Buring camp in Kuwait.

“The OTH force typically consists of two CH-47 Chinook helicopters and an infantry company that are on 24-hour standby to be on wheels at short notice to complete missions,” the statement said.

According to the coalition, this force responds when needed in the joint operations area to support field personnel, recover operations, conduct air attacks, and assist in comprehensive force protection missions.

The withdrawal of this force comes after Baghdad and Washington recently reached an agreement to withdraw US combat forces from Iraq by the end of this year.