Shafaq News/ On Tuesday, the international coalition handed over weapons and equipment worth one million dollars to the Peshmerga forces.

A source from the International Coalition added to Shafak News Agency; This equipment is to support Iraq in its mission to defeat ISIS and is part of the Counter ISIS Training and Equip Fund Program that has been in place since 2014 and is funded through the US Department of Defense budget for Operation Inherent Resolve.

The source added; The program, which Operation Inherent Resolve is overseeing, aims to support the Iraqi government in the fight against ISIS.

Today, Tuesday, the Governor of the Central Bank, Mostafa Ghaleb Mokhif, praised the management of the International Development Bank during his visit to the bank’s building.

The visit received wide attention from the financial and business sector in the capital, Baghdad, in particular, and Iraq in general, and constituted a positive anchor that the Development Bank deserves with its merit and responsibility, which demonstrates the importance of raising the level of performance to contribute to the economic construction of Iraq on the one hand and in creating solutions and creating opportunities on the other hand.

It is noteworthy that the International Development Bank was established in the year (2011) with a capital of (100,000,000,000) Iraqi dinars, and according to the requirements of the Central Bank of Iraq, the bank increased the capital in stages during the years (2013 – 2015) to become with a paid-up capital of (250,000,000,000) Iraqi dinars, equivalent to (210,000,000). ) US dollar and quickly became one of the leading banks at the local and regional levels, providing advanced banking services to all its customers at the level of individuals and corporate sectors.

{Political: Al Furat News} A government source explained how to pay the Kurdistan region’s share of the federal financial budget for 2021.

The source told {Euphrates News}, that “the amount will be an advance and for the purpose of addressing the suffering of the region’s employees who have not received their salaries for a while.”
The Prime Minister of the Kurdistan Regional Government, Masrour Barzani, announced this evening that he had reached an agreement with Baghdad regarding the region’s budget after his phone call with Prime Minister Mustafa Al-Kazemi.
Barzani said in a statement: “I am pleased to announce that an agreement has been reached under which the dues from the federal budget will be sent back to the Kurdistan region, with a retroactive effect, starting from January 2021.”
And he added, “During our phone call, I thanked him for his leadership, and I thanked the federal government for its support for this important turning point, through which we together overcame this difficult and long-standing obstacle.”
The Kurdistan Regional Government announced two weeks ago that it would send two important files to Baghdad related to “the region’s oil expenditures and non-oil revenues.”
And regarding sending the salaries of the region’s employees, the spokesman for the Kurdistan government, Jutiar Adel, suggested that “this issue will reach the implementation stage, and part of it has already reached the implementation stage, and in the near future financial dues will be sent to the Kurdistan region within the federal budget.”
It is noteworthy that the House of Representatives voted on March 31, 2021, to approve Article (11) of the Iraqi Budget Law for 2021, which is related to the Kurdistan Region’s share of the budget.
The Kurdistan region needs 895 billion dinars per month to distribute salaries without deduction, ie up to 10 trillion and 740 billion dinars annually.
Ammar Almasoudi

And the ministerial statement, which {Al-Furat News} received a copy of, stated that “the two sides discussed, on the sidelines of the consultative meeting of Arab foreign ministers, held in Doha, a number of issues related to bilateral relations, in light of the steady growth of those relations.”
He added, “The two sides also discussed the activation and follow-up of the work of the joint Iraqi-Kuwaiti committee, and preparations for holding its work in Baghdad to discuss outstanding bilateral issues.”
Hussein affirmed, “Baghdad’s keenness to develop joint cooperation with Kuwait,” expressing his “aspiration to continue working to advance the distinguished relations between the two countries and develop them at all levels.”
Wafaa Al-Fatlawy

Shafaq News/ The Prime Minister of Kurdistan Regional Government, Masrour Barzani announced, on Tuesday, that an agreement had been reached regarding the region’s entitlements in the federal budget.

Barzani said in a tweet on Twitter, which was seen by Shafak News Agency; “I spoke with Federal Prime Minister Mustafa Al-Kazemi as part of the ongoing negotiations and commitment to making the relationship between Erbil and Baghdad more clear.

He added, “I am pleased to announce that an agreement has been reached according to which the dues from the federal budget will be sent back to the Kurdistan Region, with a retroactive effect, starting from January 2021.”

The President of the Kurdistan Regional Government, Masrour Barzani, announced, on Tuesday, that an agreement had been reached with the federal government, according to which the dues from the federal budget will be sent back to the region, with a retroactive effect, starting from January 2021. 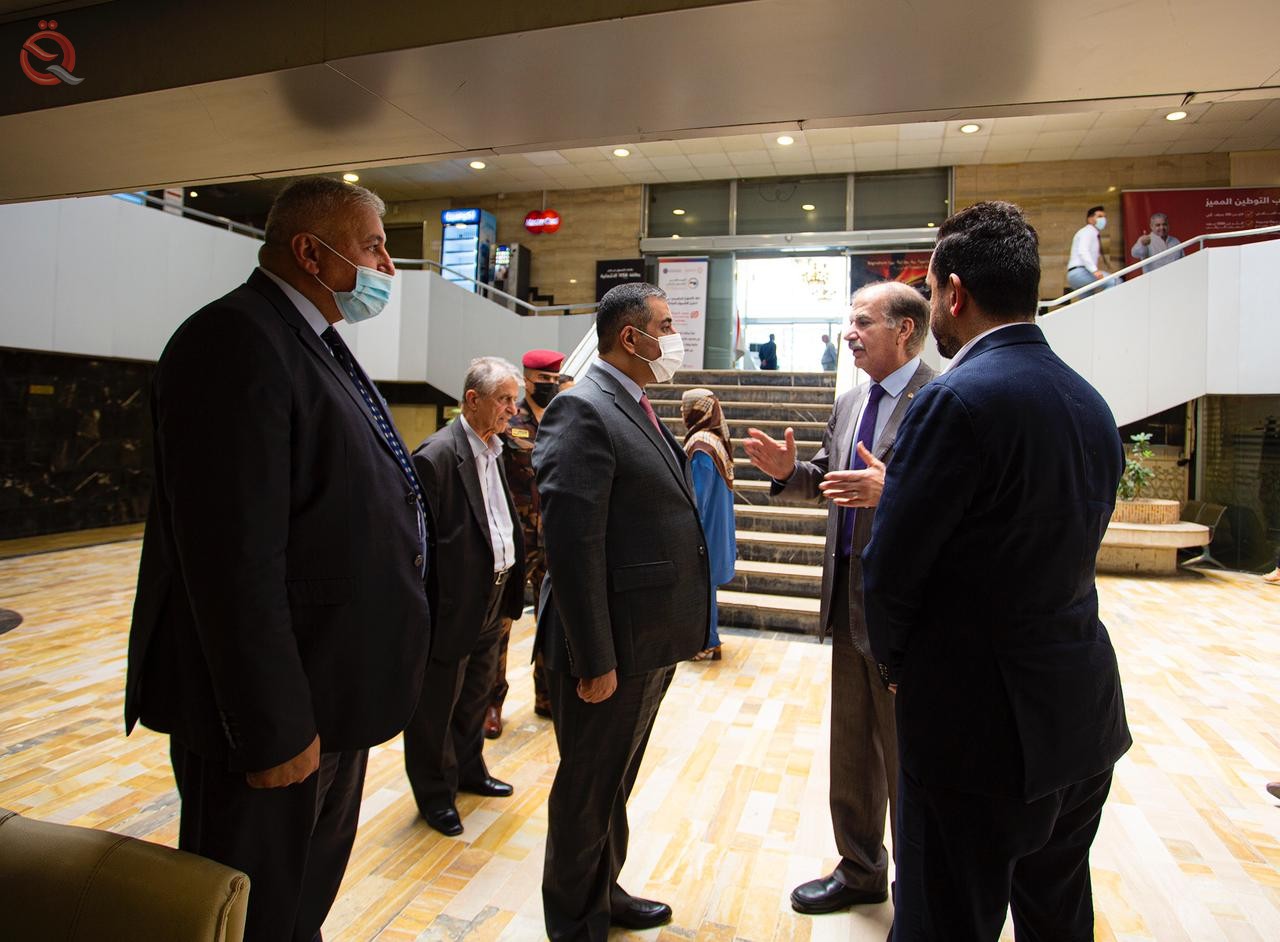 The Governor of the Central Bank of Iraq, Mustafa Ghaleb Mikheib, visited a number of private banks today, Tuesday .

During the visit, he stressed the importance of loans granted to citizens by the Central Bank’s initiative, and the need to facilitate and expedite the procedures for granting them to cover the largest possible number of citizens’ beneficiaries .

It is noteworthy that the Central Bank of Iraq launched more than (580) billion dinars from the initiative of one trillion dinars for private banks to finance about (7500) projects in the sectors of housing, industry and services .

Baghdad / Al-Mawred NewsToday, Tuesday, the Governor of the Central Bank of Iraq, Mustafa Ghaleb Makheef, directed a number of private banks to accelerate the granting of loans to citizens

“The importance of loans granted to citizens from the initiative of the Central Bank, and the need to facilitate and expedite the procedures for granting them to cover the largest possible number of beneficiaries of citizens,” he said in a statement.
It is noteworthy that the Central Bank of Iraq launched more than (580) billion dinars from the initiative of one trillion dinars for private banks to finance about (7500) projects in the sectors of housing, industry and services.

Shafaq News/ The Minister of Finance and Economy of the Kurdistan Regional Government held a meeting today, Tuesday, with the Director of the Trade Bank of Iraq (TBI) regarding the implementation of the paragraphs of the Iraqi general budget, declaring that the regional government is fully prepared to commit to implementing what is stated in the budget.

A statement by the ministry, received by Shafaq News Agency, stated that the Minister of Finance in the regional government, Awat Sheikh Janab Nuri, received the Director of the Trade Bank of Iraq (TBI) Salem Jawad Abdul Hadi.

Sheikh Janab stressed, during the meeting, the region’s full readiness to abide by all the paragraphs of the Iraqi general budget in order to reach a comprehensive understanding and the agreement between Baghdad and the region would be in the interest of the Iraqi people.

The statement indicated that the meeting was held with the aim of implementing Paragraph (11 Second) of Budget Law No. 23 of 2021, through which it is directed towards defining a mechanism for how to address and settle the debts of the TPI owed by the Kurdistan Regional Government within the framework of the same law as part of the commitment from both sides.

The budget stipulates that the Kurdistan Region will deliver 250 barrels per day of oil and half of the other financial revenues to Baghdad, in return for a share in the budget estimated at 12.6 percent.

The KRG says that Baghdad has not sent any budget payments so far, despite the passage of months since its approval.

Baghdad / Obelisk: The Ministry of Planning witnessed, on Tuesday, June 15, 2021, the signing ceremony of the minutes of discussions of the third loan for the Basra refinery development project with the Japanese International Cooperation Agency (JICA), at a value of $300 million.

The ministry said in a statement received by “The Obelisk” that the signing ceremony was attended by Technical Undersecretary of the Ministry of Planning Maher Hammad Johan, Advisor to the Minister of Finance for Public Debt and Loans Affairs Salah Al-Hadithi, and representatives of the Japanese International Cooperation Agency (JICA).

He added that the report was signed on the Iraqi side by the directors of the sectors planning and international cooperation departments in the Ministry of Planning and the director of the Public Debt Department in the Ministry of Finance, as well as the director of the General South Refineries Company and the director of the Basra Refinery Development Project Phase Three, while it was signed on the Japanese side by the representative of the Japanese agency “JICA”. For the Middle East and Europe, Ono, as well as the representative of the Regional Office for the Middle East and Europe of the Japan International Cooperation Agency, Nakura.

According to the statement, the Director of the Public Sectors Planning Department in the Ministry of Planning, Bassem Dari Mahmoud, stressed the importance of the Basra refinery development project, as it is a modern technology used for the first time in the manufacturing sector, which will lead to an increase in the economic value of black oil by converting it into oil derivatives with a higher value. .

He added: The signing of the minutes of discussions for the third loan agreement with the Japanese agency JICA to finance the project has proceeded.

He added that the purpose of signing the loan is to develop the Basra refinery and contribute to improving the quality of oil derivatives, as well as improving the Iraqi oil production capacity, meeting the local need for oil products, bridging the gap and reducing the demand for oil products, which are being imported from abroad by strengthening the productivity of a number of units in Basra refinery through the introduction of the cracking unit in the auxiliary plant and with the addition of two hydrogenation units to “treatment of light gas oil”, which will contribute an effective and prominent role in the reconstruction process and support the national economy.

Today, the Director of the Public Debt Department at the Ministry of Finance, Khaled Salah, said, “We signed today the third draft loan agreement, worth $300 million, to continue the project, and we are working to accomplish as much as possible before the end of this year, in order to be added next year to the budget law within the fourth phase of this project.” Stressing that the project is of strategic importance through the liquidation process and is very important to the Ministry of Oil, which is one of its priorities.