Shafaq News/ A spokesman for the International Coalition stated, on Sunday, that a rocket-propelled grenade was shelled near the Baghdad Center for Diplomatic Support BDSC.

Colonel Wayne Maroto said in a tweet, that the bombing did not cause any injuries or damage, and the attack is being investigated.

“Every attack on the government of Iraq, the Iraqi leadership, and the coalition undermines the authority of Iraqi institutions, the rule of law and Iraqi national sovereignty,” he added.

The bombing coincides with the inauguration of the Victoria Military Base at Baghdad International Airport, a defense system that included the entire base, which was repeatedly targeted by missiles.

A security source told Shafaq News Agency, that the defense plan included activating new systems that included warning sirens and radars, in addition to the C-RAM system that relies on the M-61 20 mm six-barrel rotary machine gun, with an effective range of 3,500 to destroy air targets.

He added that the defense plan also included a training process for military personnel under the supervision of senior American experts, through a simulation in the event of an attack, by making calls to all soldiers present, to enter the tunnels and take cover behind the barriers.

He said that this combined defense plan is the largest of its kind launched at Al-Qaeda, and is similar to a defensive plan that was implemented in Afghanistan.

{Umniah: Al Furat News} The International Coalition forces handed over to the Iraqi army, on Saturday, wheels as part of Operation Inherent Resolve.

The Ministry of Defense stated, in a statement that {Euphrates News} received a copy of it, that “in implementation of the directives of the Joint Operations Command and under the supervision of the Deputy Commander of the First Division, Brigadier General Hassan Muhammad Zidan, the international coalition forces (Joint Task Force – Operation Inherent Resolve CJTFOIR), (18) A Humvee wheel, and (25) swivel wheels carrying (5) tons, as well as two complete rescue-type wheels.
She explained that “this equipment comes to support Iraq in its mission to defeat ISIS terrorist gangs, and is part of the Training and Equipment Fund Program to Combat ISIS, which has been implemented since 2014 and is funded through the US Department of Defense budget allocated to Operation Inherent Resolve.”
The ministry added, “The program, which Operation Inherent Resolve is overseeing, aims to support the Iraqi government in the battle against ISIS terrorist gangs.”
Wafaa Al-Fatlawy

Prime Minister Mustafa Al-Kadhimi discussed with the head of the Victory Alliance Haider Al-Abadi, on Saturday, the government’s plans to face challenges and preparations for the upcoming elections.

And the media office of the President of the Victory Alliance stated in a statement that “Nass” received a copy of it (5 June 2021), that “He received Haider Al-Abadi in Prime Minister Mustafa Al-Kazemi, and during the meeting, the latest developments in the situation in the country, the government’s plans to face challenges, and its preparations were discussed To provide a safe environment for early elections.

Al-Abadi stressed “the importance of uniting the word to cross the country from the crises it is witnessing, and for concerted efforts to hold early and fair elections, and with international monitoring, that contribute to changing the situation for the better and serving our people.”

Yes Special – Mawazine News
The President of the Republic, Barham Salih, presented a bill to recover corruption revenues and met with parliamentary committees to discuss it in preparation for a vote in the House of Representatives, but the debate continues as to what this law is and is it able to recover Iraq’s looted money, estimated at hundreds of billions of dollars?
On this issue, the spokesman for the Iraqi national project, Muzaffar al-Tayeb, speaks to “Mawazine News” and says: “I do not think that this law will preserve Iraq’s money or contribute to its recovery, because the idea and timing of the law came for political purposes, despite our wishes that our opinions would be incorrect.”
He added: “We express our wishes that this law will be approved in the parliament, but it is unlikely that the political blocs in the parliament will vote on the law, especially since they have economic offices and do not want to recognize their great corruption, and all the blocs are accused of corruption.”
He pointed out, “The law, if legislated, will start with the weak, and here the old will kneel.”
The President of the Republic, Barham Salih, chaired a meeting to discuss the law in the presence of the parliamentary committees and the first vice president of the House of Representatives, Hassan Al-Kaabi, at a time when political blocs rule out that the law contributes to recovering Iraq’s money in light of the inability of the Public Prosecution and the Integrity Commission to recover over the past years.
Characteristics of the law
For his part, Chairman of the Council of Advisors in the Presidency of the Republic, Ali Shoukry, stressed that the law on recovering corruption proceeds crossed the loopholes and adopted international conventions, while he explained the advantages of this law over other laws in force.
Shoukry said, “The Presidency of the Republic has formed a committee to prepare the Corruption Revenue Recovery Law,” noting that “this law will be the most advanced in the fight against corruption as it has overcome all the loopholes in the Integrity Commission Law of 2011.”
He added, “Before preparing this project, the tendency was to amend the Integrity Commission law, but it turned out that there was a need to amend more than 20 articles, and therefore the committee headed to prepare a new law,” noting that “the committee relied in the new law on the anti-corruption agreement that was signed by Iraq in the year 2007, which contains a number of developments, including the pursuit of funds and their revenues inside, while a chapter devoted to smuggling outside Iraq.
Shukri added that “the law is devoted in Chapter Four to legal aid by concluding bilateral and collective agreements to recover Iraqi funds, and this matter is new in the law,” noting that “the committee added in order to encourage news about the perpetrators of corruption crimes and the whereabouts of the funds and persons registered in their names these funds by mitigating these funds by reducing The penalty is for the one who informs about the corrupt and their whereabouts, and the Code of Criminal Procedure is based on exempting whoever informs of the commission of the crime before the competent authorities knew that it was committed.”
And he indicated that “this law is advanced and has overcome the loopholes in the Iraqi legislation in force and relied on international covenants.”
Shoukry indicated that “the Presidency of the Republic is in discussions with stakeholders to pursue the smuggled funds, in the presence of the Deputy Speaker of the House of Representatives, the Chairs of the Legal and Financial Committee, the Head of the Integrity Committee, and the Vice-Presidents of the Legal and Financial Committees. The Financial Supervision, the General Managers and the Legislation Office in the Presidency of the Republic,” stressing that “it was agreed that several workshops would be held to read this law and make observations regarding it, which is so far just a project and it is hoped that it will be developed.”
And he indicated that “the First Deputy Speaker of the House of Representatives promised to review this law in the Parliamentary Legal Committee with the Integrity and Finance Committees starting next week,” stressing that “the Presidency of the Republic is determined to proceed with this law, which will be a qualitative leap in the pursuit of smuggled Iraqi money.” Ended 29 /

Today, Saturday, Prime Minister Mustafa Al-Kazemi directed to expedite the implementation of the Baghdad entrances and gates project on the ground, stressing the need to implement the project with specifications worthy of the name of the capital.

The media office of the Prime Minister said, in a statement received by the “National News Center”, that “Al-Kazemi chaired a special meeting of the Diwani Order Committee 32 to follow up on the project of entrances and gates to the capital, Baghdad, and to see the plans for its completion.”

The statement added that “during the meeting, the project’s designs and plans were reviewed, including controls, entry gates, yards for weighing and trade exchange, pedestrian bridges and other services, provided that the contracts signed include continuous maintenance and cleaning services.”

Al-Kazemi directed, according to the statement, the concerned authorities “to speed up the implementation of the project on the ground, and to overcome bureaucratic complications,” stressing “the necessity of implementing the project with specifications worthy of the name of Baghdad, its history and its people, and to overcome the failures that occurred previously, which led to the establishment of projects without adequate studies.” , which resulted in projects that do not provide a service to the citizen, and caused a lot of money to be wasted.”“National 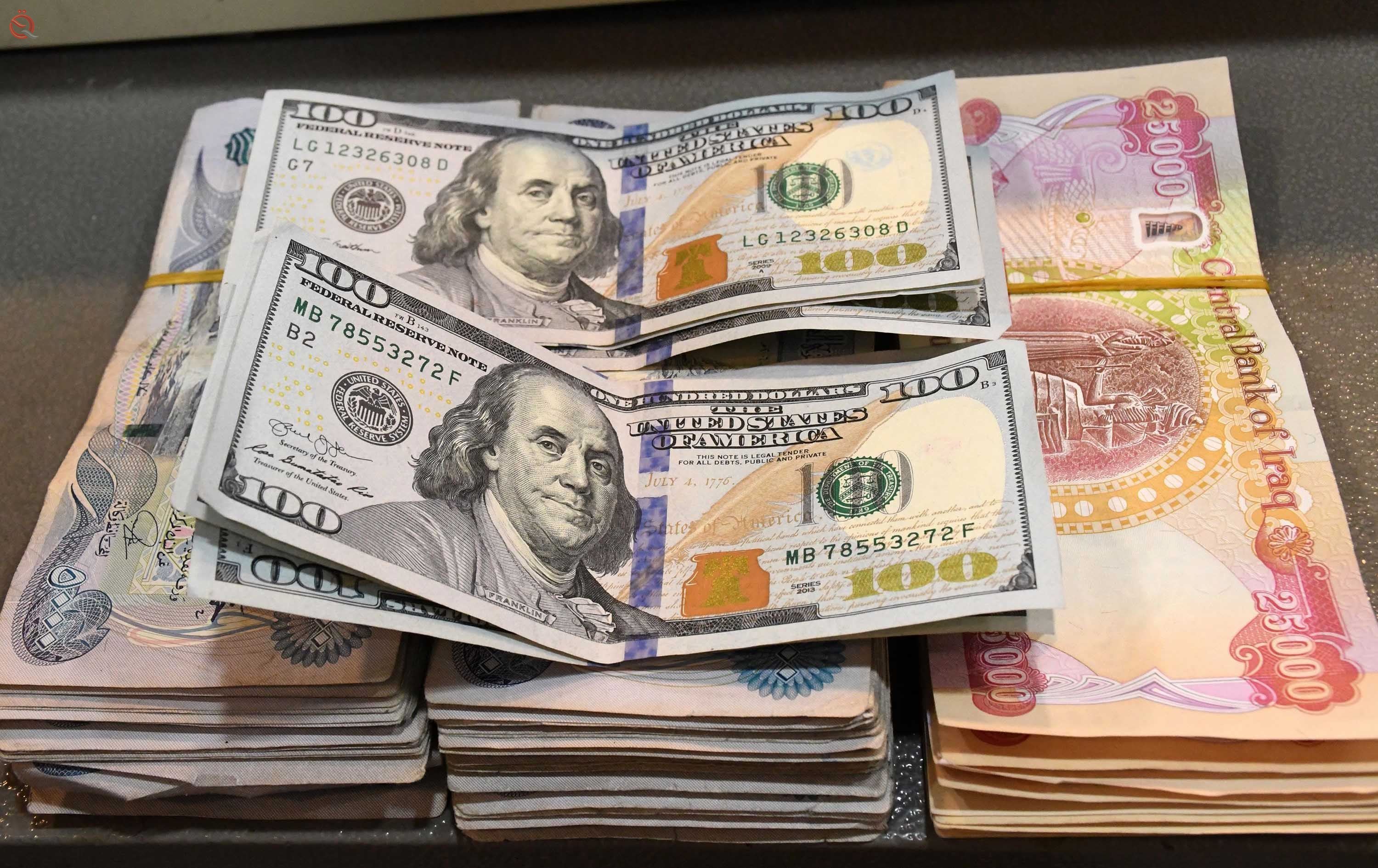 The exchange rates of the dollar rose, today, Saturday, in the main stock exchange in Baghdad and banking shops.

The selling prices in the exchange shops in the local markets in Baghdad amounted to 150,000 Iraqi dinars, while the purchase prices amounted to 149,000 dinars per 100 US dollars.

{Political: Al Furat News} The Finance Committee in the House of Representatives demanded to host the Governor of the Central Bank regarding the continuous rise in the dollar exchange rate.

Member of Parliamentary Finance submitted a request to host the governor of the Central Bank, to find out the reasons for the continuous rise in the exchange rate of the dollar against the dinar.

Baghdad / Obelisk: The Joint Operations Command announced, on Saturday, June 5, 2021, that the Iraqi Military Technical Committee is holding its first meeting with its American counterpart in the Iraqi capital, Baghdad, noting that the American side reiterated its respect for Iraqi sovereignty.

The joint operations said in a statement received by “The Obelisk” that the two sides agreed on a framework for the upcoming sessions to discuss the long-term security relationship, and an action plan to implement the outcomes of the strategic dialogue.

The statement added: The plan will be completed during the next session of talks that will be held in Baghdad or Washington in July or August of this year, and will include specific mechanisms and timings to complete the redeployment of combat forces of the international coalition outside Iraq.

Baghdad / Obelisk: Basra Light crude recorded the highest prices on Saturday, June 5, 2021 in OPEC, to approach $ 72, in conjunction with the rise in global oil prices, while the price of Basra Heavy crude decreased, before they closed yesterday, Friday.

The international oil prices rose to close Brent crude to 71.89 dollars, and West Texas crude to 69.62 dollars a barrel.

And last April, the OPEC + group decided to increase production by 2.1 million barrels per day from May to July, in anticipation of increased global demand despite the high cases of Corona virus in India, the third largest oil consumer in the world.